The dangerous hate movement we need to talk about 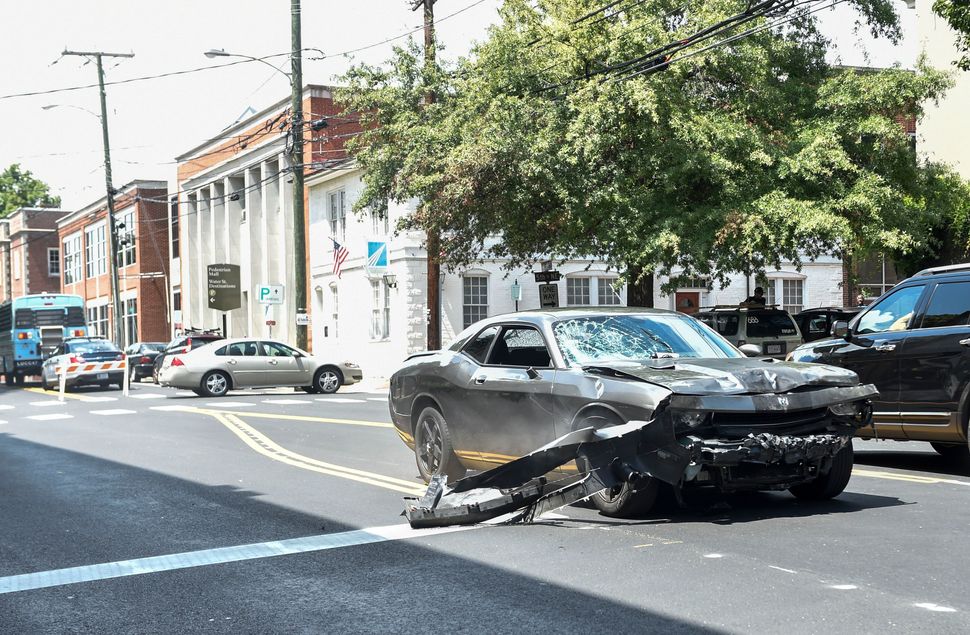 Good People on Both Sides: The silver Dodge Charger allegedly driven by James Alex Fields Jr. passes near the Market Street Parking Garage moments after driving into a crowd of counter-protesters on Water Street on August 12, 2017 in Charlottesville, Virginia. By Getty Images

Men Who Hate Women: From Incels to Pickup Artists; The Truth About Extreme Misogyny and How It Affects Us All

There’s an ideology that’s spreading via the internet, leading to terrorist attacks in America. It existed before the internet of course, but the past decade has seen it spread rapidly through mobile social media, growing in both breadth and virulence. Of course for an ideology to convince a score of men to commit mass murder in suicide attacks on the U.S. mainland you would expect there to be a sizeable number of less fanatical supporters. And that is indeed the case. Anyone who doubts the mass influence of this ideology only has to look at the ways in which mainstream politicians have mouthed support for its basic tenets.

Laura Bates’ new book “Men Who Hate Women” traces the overlapping, intersecting and mutually informing networks of male supremacy that comprise the “manosphere.” Millions of boys and men in search of support for a myriad of problems are being greeted by toxic networks. Early men’s rights organizations such as the National Organization for Men Against Sexism supported individuals’ struggle against outdated and bigoted definitions of masculinity like power, physical strength and domination that were making them unhappy and hurting the people around them. More recently, like cuckoos in the nest, MRAs (Men’s Rights Activists) have appropriated the rhetoric for their particular brand of misogyny and thrown anyone opposed to male supremacy out of the manosphere.

Bates, a Cambridge-educated actress who experienced regular mistreatment at auditions, set up the Everyday Sexism project in 2012 to record the day-to-day sexisms that women suffer, from the minor to the egregious. In 2014 her best-selling book “Everyday Sexism” recounted her experience setting up the project and how it found resonance across the world. “Men Who Hate Women” deals with the emerging resistance she has encountered recently from more organized purveyors of disinformation and misinformation, from high schools through to national media. Although her personal experience is based in England, her data comes from across the English-speaking world and especially from the United States. Though much of the content is difficult to read, graphically shocking and violent, every parent and teacher in America needs to read the easily digestible ninth chapter “Men Who Don’t Know They Hate Women.” In it Bates, describes how body-building networks, online gaming chats, Instagram and YouTube are being used by racists, misogynists and anti-Semites to inculcate middle school and high school students with bigoted norms.

One of the reasons that “Men Who Hate Woman” is so disturbing is the sheer scope of the hatred that it encompasses and the simplicity of Bates’s argument. She traces the arguments through the various flavors and tiers of the manosphere as they intersect and hook up to one another, beginning with understandably insecure 15-year-old boys (which is to say, basically, all 15-year-old boys) and ending with a “pussy-grabbing” president, via various types of self-promoting enablers like Steve Bannon and Jordan Peterson. But it’s even broader than that.

After the white supremacist marches in Charlottesville in 2017, James Fields Jr. deliberately drove his car into a crowd of anti-racist counter-protestors killing Heather Heyer. Subsequent reports noted his neo-Nazi links but few media reports — in his case or in others — note the connection to the manosphere. As he drove into the crowd Fields was chanting “White sharia now.”

“Though it started out as a satirical meme created by a white supremacist, the term white sharia has taken hold across alt-right websites. In a single concept, it blends the racist, Islamophobic, anti-Semitic, misogynistic, and heteronormative values of the alt-right. In a nutshell, white sharia is the argument that white men should adopt their own version of what they perceive as the Islamic practice of enslaving women. The aim would be to remove white women’s sexual autonomy and force them (through brutal rape and servitude) to become ‘baby factories.’ This would enable white supremacists to ensure the ‘purity’ of their race and create enough new recruits to their cause to overthrow the invading hordes of immigrants, and the tyranny of the all-controlling, corrupt Jewish forces they believe dominate our society.”

While those who cast slurs at Mexicans or systematically disadvantage Blacks are not necessarily misogynists or antisemites they are all looking for someone to blame. In his 2018 “Information Wars,” Richard Stengel surmises that the “weaponization of grievance is the unified field theory behind the rise of nationalism and right-wing strongmen.” Where the American Dream and media-perfect lives meet the vicissitudes of an unforgiving world and harsh capitalism, disappointment lies. For people expecting an easy, fulfilled life but end up having to work hard for scraps, it’s easier to look to those who are plotting against you than to do the hard work of introspection or the even harder work of system analysis and reform.

In a quotation of unknown provenance that has been polished by the internet, “When you’re accustomed to privilege, equality feels like oppression.” Privileged groups don’t need to be treated with objective equality to feel like they are being oppressed — any diminishment of power can lead to a vague feeling of lost prestige and discontent. Embracing “nationalism and right-wing strongmen” is a political way of siding with power and abdicating responsibility for social reform. On a personal level, siding with power is just agreeing that the people who traditionally have power — men — should be in even more control. Jobs and sex are owed to us by the world and the women who are stopping this need to be taken to task — isolated, disempowered, enslaved, raped or killed, depending on the area of the manosphere.

Unsurprisingly the people happiest with the status quo being preserved and even enhanced are mostly men, mostly white, mostly middle-class and — as far as we see for whole of the manosphere at the moment — predominantly located in North America and the United Kingdom. And that includes the most fertile ground in which to seed righteous indignation — young, insecure men.

Male supremacists believe they are entitled to sex and jobs and power. Women are stopping them having those, so they take up different strategies to compel them. In the crabbed, clubby, insecure jargon of the manosphere these angry boy-men can become part of self-reinforcing groups. These groups include incels (involuntary celibates), PUAs (pick up artists), MGTOW (men going their own way). Each of these communities employs casually brutal language whose use desensitizes users and dehumanizes women. Words matter. These groups frame the worldview of millions of men and even have visible influence, as particular chunks of jargon like “white sharia” emerge into public view

The manosphere is organic and heterogeneous but, in general, Incels are violently anti-women and anti-feminist, pick up artists are casually anti-women as a means of getting sex and the MGTOWS (“mig-tow”) believe that women are so dangerous that they should be avoided as much as possible. While reading Bates I used this simplifying taxonomy: the shoot ’em ups (kill them), the mess ’em ups (f— with their bodies and heads), and the avoid ’ems (isolate and disempower). Also known as the Elliot Rodgers, the Donald Trumps and the Mike Pences.

Each of these echo chambers hurts women most but still hurts its members. Bates approvingly quotes a Pankaj Mishra review of Jordan Peterson’s 2018 “12 Rules For Life: An Antidote to Chaos.” In the New York Review of Books he says that Peterson is “a disturbing symptom of the malaise to which he promises a cure.” Bates takes this critique and goes further to excoriate the manosphere, showing that it is both a symptom and an ongoing cause of the malaise to which it promises to be a cure. Here’s how it works.

From jobs to sex to almost anything, unhappiness can be blamed on women undermining classically sexist ideas of what it is to be manly and powerful. The manosphere ignores Macbeth’s attack on toxic masculinity — “I dare do all that may become a man; Who dares do more is none” to quote, unquestioningly, a millennia of patriarchal images to reinforce its dubious claims. As men are encouraged and bullied to adopt increasingly rigid gender roles, treating the women in their personal and professional life badly, they become increasingly unhappy to which the only available answer is to blame women. The vicious cycle accelerates. There is power spinning off this spiral of hatred, insecurity, entitlement and sexual frustration, that is seductive for salesmen and politicians. Unscrupulous predators exploit millions of unhappy men ready to spend money and votes on snake oil misogynists.

By virtue of its appeal to a mass audience, the manosphere is a significant part of the hate-osphere. Through disinformation, misinformation, bullshitting and framing the hatosphere skews and pollutes social discourse, undermining trust and creating rifts — sometimes for ideology, sometimes for the lulz. The manosphere teaches millions of men how to be effective parts of the hatosphere. Disinformation is the lies put out there by vested interests, like the Australian MRA claim that 21 fathers die from suicide a week. Misinformation is the arguably unwitting spread of those lies by supporters, media, social media, politicians. Bullshitting is the deployment of irony to take the edge off hateful comments to draw people in; Bates quotes Andrew Anglin, editor of the neo-Nazi publication Daily Stormer as saying, “The unindoctrinated should not be able to tell if we are joking or not.” Framing is talking about the wrong thing or using the wrong terms. The term “alt-right” is the wrong euphemism for a group of American neo-Nazis, and every bit as much their coinage as “Proud Boys.” Framing means having the wrong debate — smearing or defending Holocaust survivor George Soros rather than discussing the rise of America’s extreme right; arguing about wolf-whistles or the possibility of fake rape accusations rather than America’s legal and social blindness to endemic sexual assault pointed out by the MeToo movement.

So far this millennium has provided the conditions for a perfect storm of grievance. Globalization policies have enriched the wealthiest few, stripped workers in rich countries of their jobs and, especially in the United States, of their power and labor rights. At the same time, the response of the American left has been to skirt the issue of deep economic inequity and to insist on an inadequate rhetoric of inclusion. Bates’s sobering book reminds us that we need a society to be proud of and communities committed to progress and improvement.

The dangerous hate movement we need to talk about