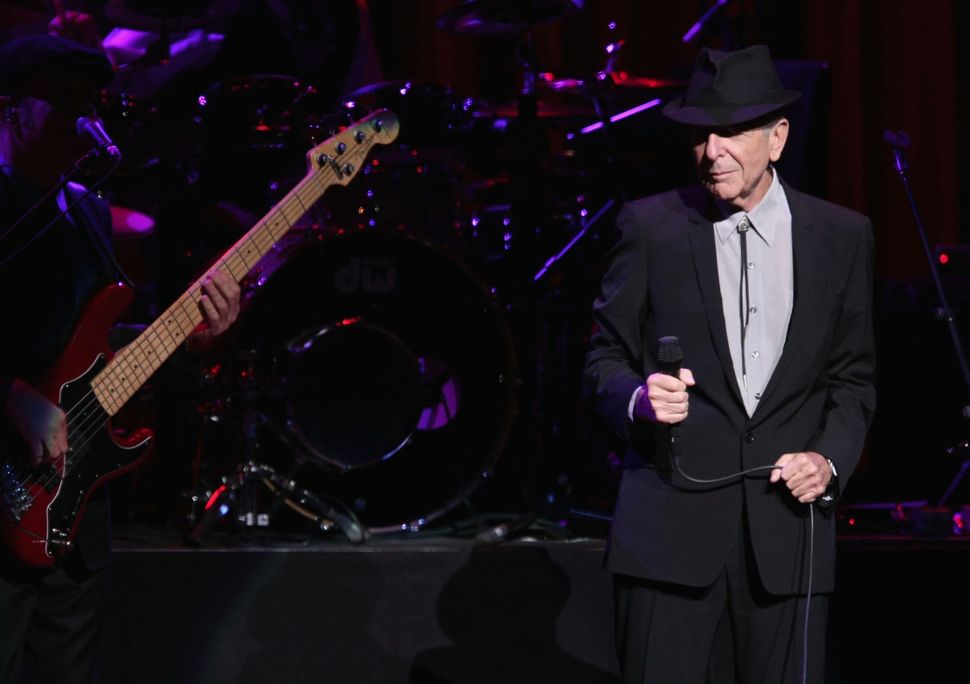 In January 2018, after the late Leonard Cohen received his last, but not final, Grammy nomination, a representative from his hometown attended the ceremony: The cantor from the synagogue he grew up in.

He wasn’t just there as an observer — he was a contributor.

“My greatest sources of pride is that the choir and I appeared on a Grammy Award-winning song sounding like a synagogue choir and me sounding like a cantor and not selling out to pop culture,” said Gideon Zelermyer, who since 2004 has served as the cantor for the Orthodox Shaar Hashomayim congregation, where Cohen’s father and great-grandfather both served as presidents. On Sunday, Zelermyer’s ensemble may mark another victory lap at the Grammys for their work with Cohen.

Five years after Cohen reached out to Zelermyer to contribute vocals for the title track on 2016’s “You Want it Darker” the songwriter-poet, who died in November of that year, is once again nominated — this time he’s up for Best Folk Album. for his posthumously released “Thanks for the Dance.”

Zelermyer is featured with his choir on the song “Puppets” and isn’t sure if “Folk” is the right category for the record. He wasn’t confident “You Want it Darker” was truly the Best Rock Performance, either. But then, Cohen often defied classification.

“Leonard is a most unusual human being,” Zelermyer said from his home in Montreal, cloistered by bookshelves lined with CDs.

While he was only ever in the same space as Cohen three times — at a concert, at the “You Want it Darker” album release and at Cohen’s burial, where Zelermyer officiated — the two had a decade-long correspondence, initially made up of holiday-timed pleasantries over email. From the beginning, Zelermyer was floored by Cohen’s pithy but profound replies.

“He wrote me back the most amazing email anybody has ever sent me,” Zelermyer said, referring to Cohen’s response to a pre-High Holidays greeting. “‘May your voice reach that Place, and bring down the blessing.’ And I thought to myself, ‘wow, you know, nobody has ever distilled into a handful of words what I do as a cantor.’”

Naturally, when Cohen approached Zelermyer to work on his latest album in 2015, the cantor replied: “Hallelujah! I’m your man!”

The decision to collaborate further clarified Cohen’s understanding of Jewish liturgical music for Zelermyer, who said that Cohen was never arbitrary when alluding to tradition in his work. He selected “You Want it Darker” for the cantor and his singers to perform on, and it’s easy to see why.

The Grammy-winning single is a propulsive, at times apocalyptic composition steeped in religious imagery and riffing on the Mourner’s Kaddish. At the time of its release, on Cohen’s 82nd birthday, many rightly predicted the singer was close to death, as he rasped “I’m ready, my lord.” In the background, the synagogue choir sing “Hineni, hineni,” (Hebrew for “Here I am,” and a word linked to the Binding of Isaac and Rosh Hashanah services). The lyrics seem to indict God for his apparent indifference to suffering while the speaker, simultaneously, surrenders to His will with a growl. Zelermyer sings a solo khazones toward the end and is also featured with the choir on the track “It Seemed The Better Way.”

The later collaboration, “Puppets” taken from Cohen’s 2006 poetry collection “Book of Longing,” feels like a throwback to his 1964 poetry collection, “Flowers for Hitler,” which meditated on the Holocaust and the banality of evil.

The Shaar Hashomayim male choir is juxtaposed with an angelic women’s choir from Germany, oohing as Cohen recites “Puppet me and puppet you/Puppet German/Puppet Jew.” In a nod to continuity, the song was composed by Cohen’s son, Adam, and its artwork shows hands making the blessing of the Kohanim.

In both songs, using a cantorial sound makes thematic and sonic sense. But Zelermyer said that the gnomic Cohen never answered a question he’s often asked: Why use him and his singers?

Zelermyer understood later that choosing the synagogue ensemble was deliberate, not just for his multigenerational connection to Shaar Hashomayim, but for the words he had them sing.

“They weren’t just for backup singers, they were for religious singers, people who are grounded in a belief system that was something that he subscribed to and that gave him a sense of comfort when he was facing down death,” Zelermyer said. “The first time he heard a cantor sing ‘Hineni’ was in my sanctuary, so there’s obviously a tremendous core connection for him to that place.”

Win, lose or show on Sunday, Zelermyer will have a certificate to put next to the previous one from the Grammys and the award for Album of the Year from their Canadian equivalent, the JUNOs.

“Leonard deserved it,” Zelermyer said of the last win. “To have been a small footnote in the connection between Leonard, his religious identity, his identity as a son of Shaar Hashomayim and ultimately to have been able to put him in the ground with dignity, that is an unforgettable part of my life’s experience — and not exactly what you imagine when you become a cantor.”