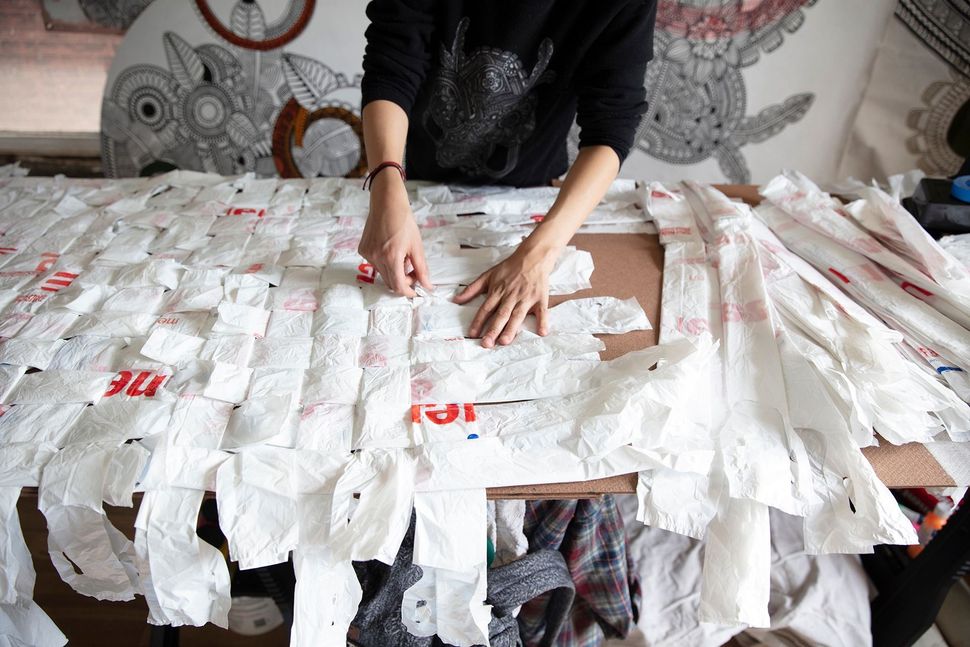 Olivia Guterson working on “At Our Table.” Photo by Sal Rodriguez

Jews are uniquely equipped to ruminate on a year of plagues — from time immemorial, plagues have been our dinner conversation.

But the pandemic is different. At your Seder, it may not be wise to sprinkle wine for the Makot Mitzrayim (those drips could themselves hold COVID droplets). God’s mighty hand and outstretched arm have yet to see us through to a pandemic-free Promised Land. We are confronting novel plagues. We are wrestling with grief over a computer screen. We’re mourning the loss of once vibrant communities. Some of us are reminded, by tent cities of the dispossessed, of our time in the wilderness or finding new dimensions in the core duality of Passover: between slavery and freedom.

Beginning March 26, artists in six cities are responding to the prompt of contemporary plagues in the second leg of “Dwelling in a Time of Plague,” an installation series commissioned by the arts and culture collaborative CANVAS in partnership with LABA, Asylum Arts, Reboot, CAJM and the Jewish Books Council.

Working in diverse mediums, from Toronto to Charlotte, North Carolina, the outdoor works offer a chance to reflect on a grueling year and the challenges that still await us on the other side.

Here is what some of the artists are presenting the world for yet another pandemic Passover. A full list of contributors can be found here. 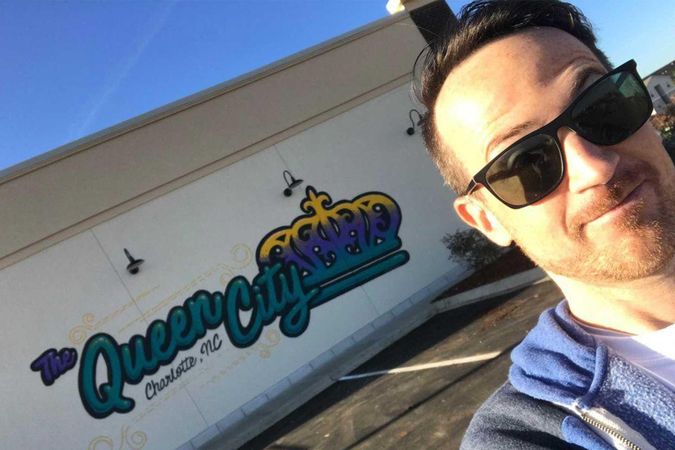 Wirth’s spray-painted mural, a portable 16-foot by eight-foot mobile wall, represents the 40 years the Israelites spent in the desert and the contemporary plague of housing insecurity. Depicting a tent city like the one that appeared in Charlotte during the pandemic, the mural will be displayed with projected animations through which Wirth will “unleash the elements” and evoke the harsh conditions of those living outdoors. The central tent is illuminated with the Hebrew word “Havtacha” or “Promise.” 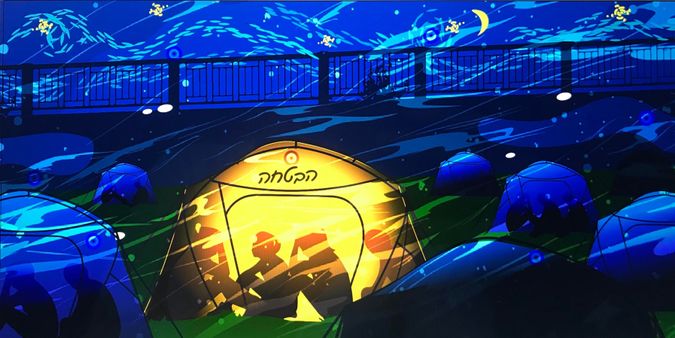 “It’s all based on this idea of a promise. What do you owe to your neighborhood, your colleague, your neighbor, your friend, your family? We have different standards for that, so it opens up that discussion: what do we value collectively as a society despite our differences?”… “Most Jews in Charlotte live very comfortably. They’re not affected by these things. Does it mean that we’re not connected to it? Some of us are one generation two generations away from severe suffering, we’ve got to kind of own that ancestral tradition, pressure — whatever you’re gonna call it. Obligation. I think there’s something there to be said that should stir the heart of any Jew.” 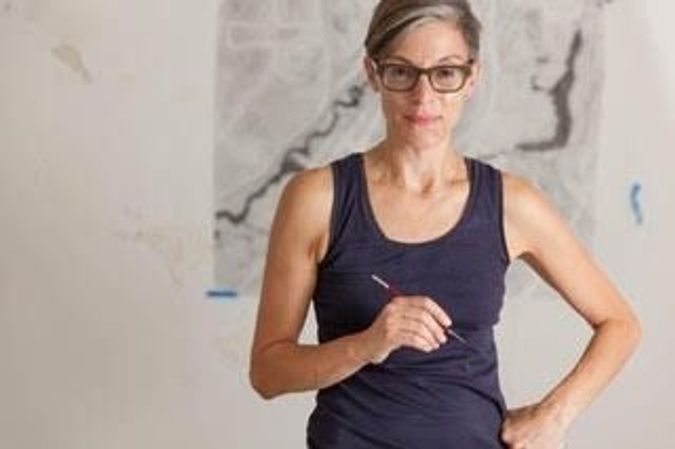 Artwork: “This Place Has a Body”

Ciarrocchi’s installation has two parts. The first, inspired by her series on Yizkor books, is a painted mural based on interior details of vanished Eastern European synagogues with a unicorn, a symbol of rebirth, at its center. Her other offering is a video display in Times Square, showing her body dancing through space, wiping away an underimage through movement and mapping how we move through cities. She is meditating on “vanished places.”

“This Place Has a Body,” mural sketch Image by Maya Ciarrocchi

“The whole thing about vanished places is not only my Ashkenazi ancestry but also being a lifelong New Yorker, because things disappear in New York all the time. Flux [happened] even pre-pandemic. Businesses open and close, buildings come down and are raised up again. We live in apartments and homes that have been occupied by people for generations before us, so it feels like a place of ghosts if you looked over the surface of things or scratched the paint a little bit… I hope that at least the mural will stay visible when we are on the other side of this and be a place that can be a memorial to all that has vanished, but also be a place of renewal or give us a feeling of renewal.” 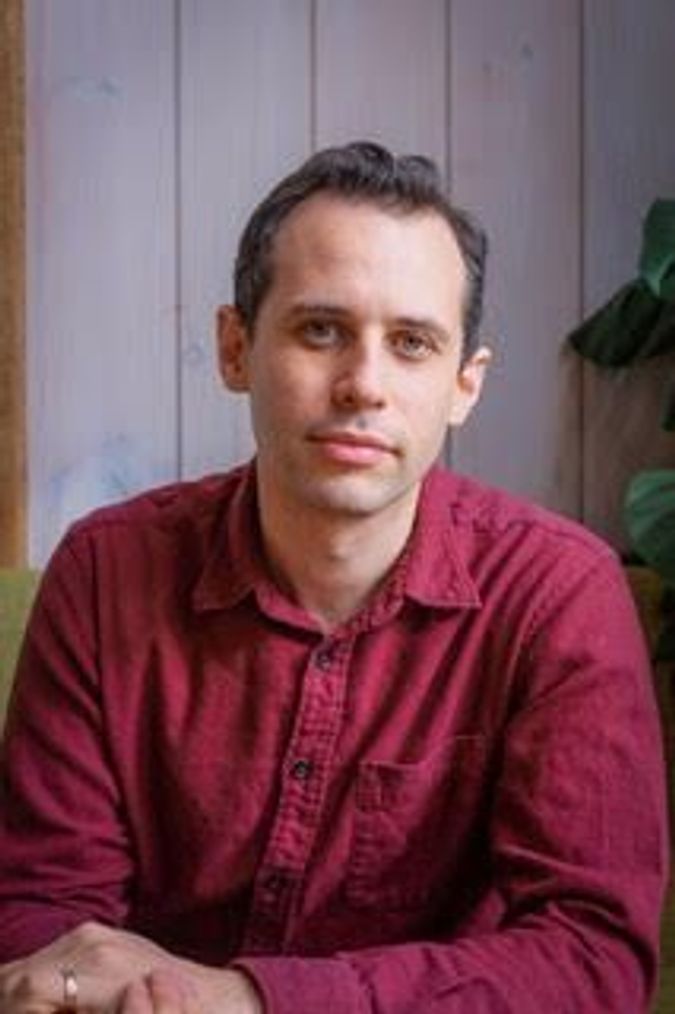 Artwork: “in the absence of a proper mourning”

Beery’s artwork directly addresses the plague of COVID, collecting 10 Zoom testimonials from people who lost loved ones to the disease. Two 15-foot tall arches will frame large prints of the bereaved’s Zoom backgrounds, at the base of which outdoor speakers will play audio of the Beery’s interviews. The artist, who hopes other public memorials like this will follow, was inspired by a Zoom shiva he attended and the question of whether we can truly empathize with those in mourning from a distance. 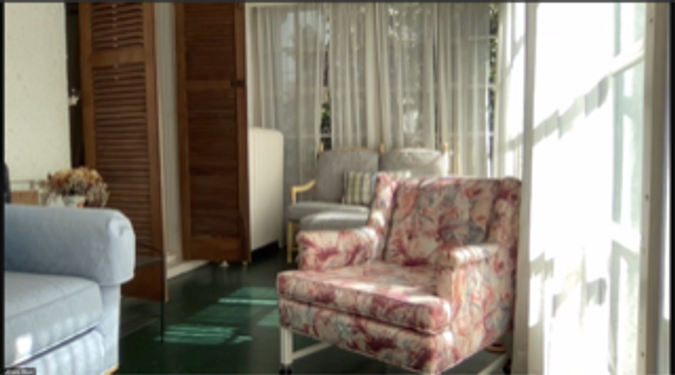 A screenshot of a Zoom background used in Beery’s “in the absence of a proper mourning.” Courtesy of LABA

“The symbol in Passover that really inspired this project was the open door and the empty chair. The practices of welcoming Elijah, but really the unexpected guest, the person without a place to eat. The question that was on my mind at the time was, ‘Are we really going to keep our doors open during COVID during Passover? What does it mean to welcome people in? How do we welcome people in when in fact the only entry we have is through screens? I thought it would be really important for us as artists, but also as a Jewish community to find ways of creating public collective mourning rituals and memorialize the people that we’ve lost and to really care for the people who are grieving right now.” 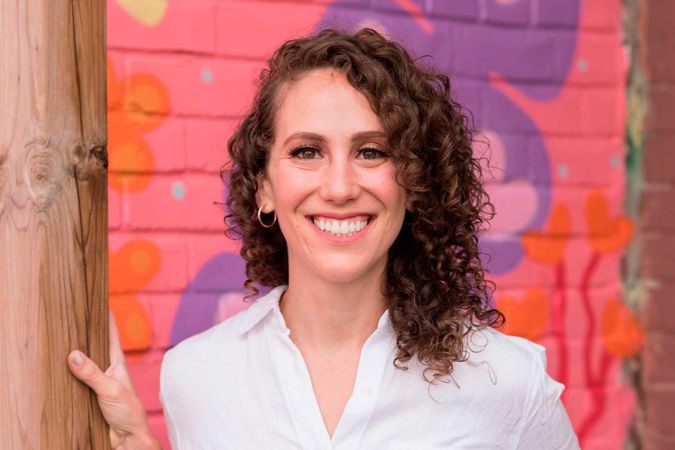 Kezwer’s mural, made with acrylic paint in the windows of the Toronto JCC, examines the plague of binary thinking. She represents the idea with typographic layouts of the word “both” accompanying an ampersand. The artwork is meant to represent one of the core dualities of Passover — between freedom and slavery — and the phenomenon in the pandemic of suffering coexisting with compassion. 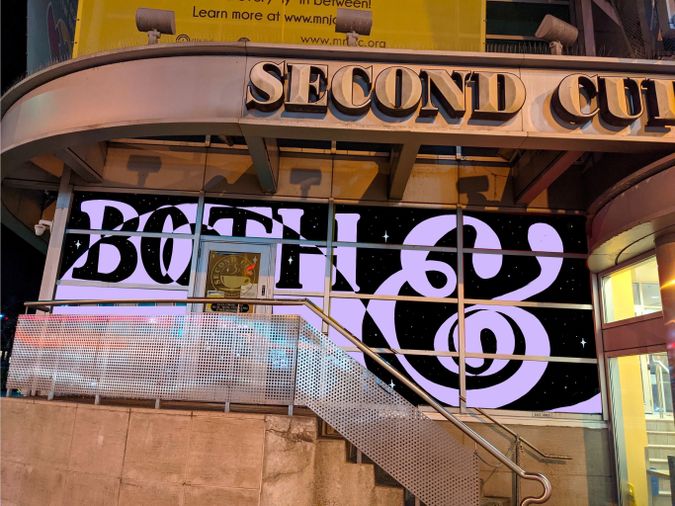 “We’re seeing daily death and hardship in so many different forms, but we’re also seeing this huge outpouring of compassion and love and new ways of people trying to show support for one another… I picked as my contemporary plague binary thinking, because I think that’s the best way to name this phenomenon. We were worried if we as humans were primed to only be able to hold space for either or, because our brains just wanna remove complexity. But that’s so limiting, and that’s something that prevents us from really being in our wholeness and embracing the fullness of life… Passover is so much about storytelling. You have the choice to write your own story and you or rewrite the narrative of your story. I think like that’s what freedom really is.” 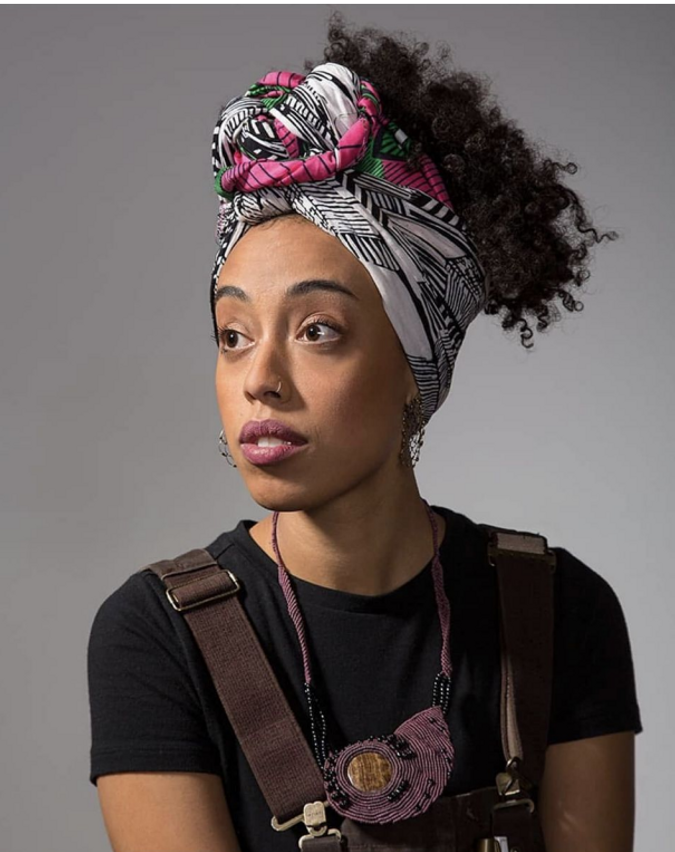 Artwork: “At Our Table”

Guterson’s artwork was inspired by the Reboot project Plastover, which asks Jews to consider single-use plastic as a kind of hametz. The prompt clicked with her longtime practice of collecting plastic bags around her neighborhood. Repurposing plastic banners and tarps, woven or ironed together to create a tablecloth and other decorations (some in the shape of a synagogue window near her home), Guterson is setting a Seder for four on a 20-foot, social distance compliant and environmentally sustainable Baltic birch table with plastic place settings. Having not seen her relatives since the pandemic, she hopes to evoke the atmosphere of connection she felt at her family Seders in an outdoor space while drawing people’s attention to the everyday items we discard. 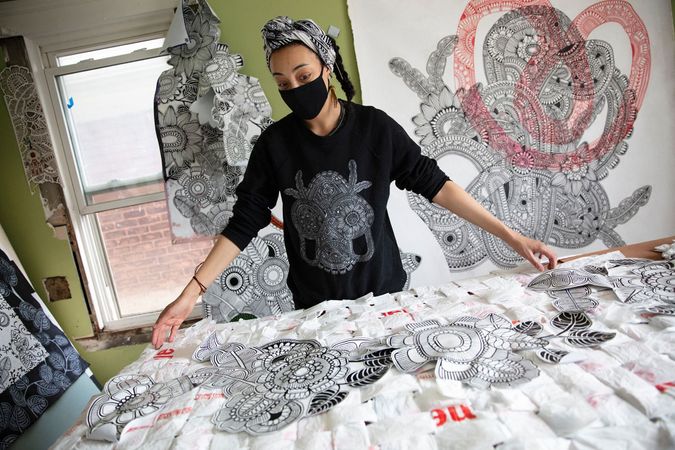 Olivia Guterson working on “At Our Table.” Photo by Sal Rodriguez

“Passover is this celebration of liberation and securing the collective future. And I think that that means we have to examine the lives that we live now and make different types of sacrifices. The life span of a plastic bag is five to 15 minutes and will last like 400 years — it never goes away…. Something that provides so much comfort for me is there are a few days a year where this global community is all going through the same actions together. We’re all remembering, we’re all asking questions and being able to reimagine how we’re able to pass things forward. I don’t think it’s remiss that we don’t really have a word for ‘history.’ Our word is ‘memory,’ and there’s the memory of going through and doing things. But then there’s also the memory of how we collectively gather.”