How the gods of hair metal worshipped the Borscht Belt hustle 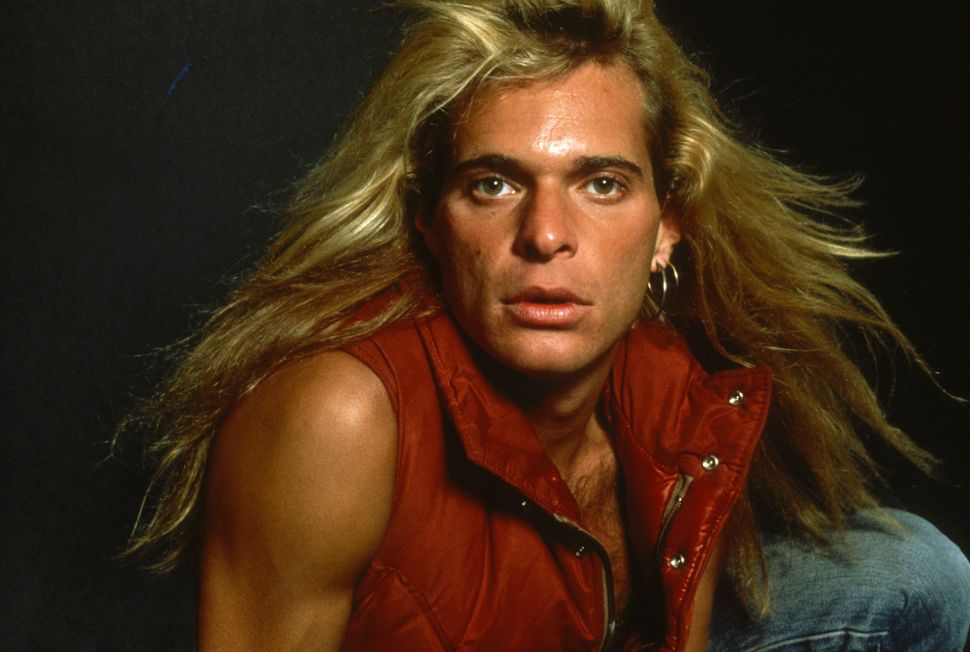 Nöthin’ But a Good Time.

By Tom Beaujour and Richard Bienstock

It was during the first few weeks of 1984 that I suddenly realized David Lee Roth was Jewish.

I’d been a Van Halen fan for nearly five years at that point, yet had somehow never considered the possibility that he might be a member of the tribe. Maybe I was thrown off by his middle name, which imparted enough of a wild-eyed-Southern-boy vibe to distract me from the none-more-Jewish pairing of “David” and “Roth.”

Maybe it was his colorful arsenal of stage moves — which included taking ten-second swigs from a large bottle of Jack Daniels and doing martial arts kicks in just fringed chaps and a thong — and his mascara-wearing, spandex-sporting, quite-possibly-bisexual California satyr persona, all of which added up to something way more exotic and outré than I or my Jewish high school pals in the Midwest could relate to. (I mean, 1980’s “Women and Children First” came with a bondage-o-rama Helmut Newton poster of a shirtless, leather-trousered DLR kneeling and chained to a cyclone fence. We had no idea what to make of that one.)

But when I saw Roth doing a promo spot for Van Halen’s new “1984” album on NBC’s “Friday Night Videos” (we didn’t have cable TV in metropolitan Chicago yet, so no MTV for us), the shekel finally dropped. The man’s absurd flurry of hyperbolic adjectives was pure Borscht Belt shtick; and while I probably wouldn’t have wanted him anywhere near a family gathering, his gift for obnoxious gab would have put any of my Jewish uncles to shame. In that moment, it finally occurred to me that Roth, like so many Jewish entertainers before him, was equal parts showman and salesman… and that if he ever got rid of his headband and eye makeup and cut his blonde mane down to its brunette roots, he’d look an awful lot like my dentist.

Salesmanship and showmanship are twin themes running through Tom Beaujour and Richard Bienstock’s riotous new “Nöthin’ But A Good Time: The Uncensored History of the ‘80s Hard Rock Explosion.” Taking an oral history approach, the weighty but compulsively-consumable tome draws upon some 200 interviews that Beaujour and Bienstock — two Jewish rock journalism veterans who grew up playing in punk rock and metal bands — conducted with musicians and other industry participants to recount the rise and fall of what we now know as “hair metal,” the radio-friendly brand of heavy metal that enjoyed an eight-year reign on the U.S. charts before being supplanted by the darker and heavier sounds of the grunge movement.

For Mötley Crüe, Ratt, W.A.S.P., Poison, Cinderella, Warrant and hundreds of other hairspray-happy bands of the era, life in the 80s is all about the hustle — the perpetual push to get noticed by record companies and bring fans to their shows, which typically includes passing out or pasting up thousands of flyers throughout their stomping grounds — and the endless drive to one-up rival bands onstage. The Crüe’s Nikki Sixx experiments with new ways to light himself on fire; W.A.S.P.’s Blackie Lawless wears a saw blade codpiece while “sacrificing” a topless woman; Poison cover their ecstatic crowds with enough Silly String to choke a river. And once arena-level success is achieved, the stage production has to be kicked up several more notches: Fake cabinets have to be built to give the impression of a mountain of amps, Pentagon-worthy amounts of pyro must be stockpiled, and methods for enabling the musicians (and sometimes drums and/or pianos) to fly above the stage must be devised. 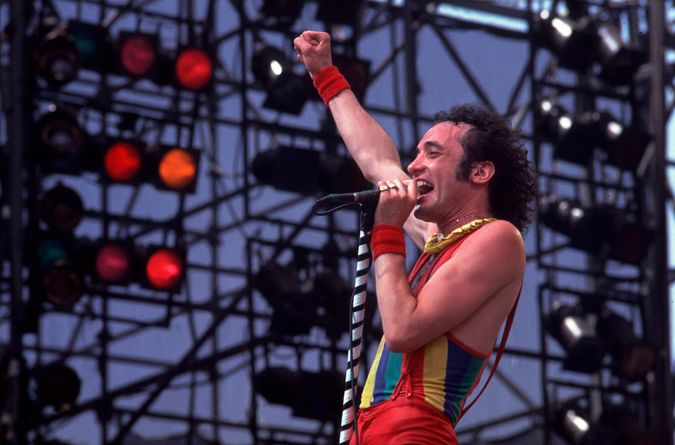 Not-So-Quiet Rioter: The late Kevin DuBrow was one of a handful of artists who launched hair metal into the stratosphere. By Getty Images

Sure, there’s plenty of sex and drugs to go with the rock and roll, and “Nöthin’ But A Good Time” is filled with numerous impressive (and cautionary) tales along those lines. But one also comes away from the book filled with intense admiration for just how much old-fashioned work these musicians actually put into building their careers and entertaining the hell out of their fans.

I also came away from “Nöthin’ But A Good Time” with the unexpected realization that hair metal might have left a much smaller mark upon 80s pop culture if it hadn’t been for the handful of hard-hustling Jewish musicians who really put it over. I say unexpected, because hair metal always struck me as about as Jewish as ham-and-mayo on Wonder Bread; much as I enjoyed it at the time (and still do), the music of the genre seemed to mostly consist of shallow party anthems sung and played by guys who looked like shiksa goddesses. Any evidence of intellect was deeply frowned upon; White Lion frontman Mike Tramp, probably the prettiest of all hair metal pretty boys, is portrayed in the book as regularly at odds with his bandmates over his attempts at social commentary. (The band is especially mystified by Tramp’s lyrics for their 1989 single “Little Fighter,” which he dedicates to the sunken Greenpeace vessel of the same name. “I’m like, ‘You wrote a song about a boat?’” White Lion guitarist Vito Bratta grouses. “We’re coming off a multiplatinum record and our first single’s about a boat?”)

Thanks in part to the advent of MTV, pop success in the 1980s had as much or more to do with how an artist looked as what they sounded like, and hair metal was as much of an offender in this respect as any other genre. Every hair metal band had to have a hot-shredding lead guitarist in the lineup — but having a pinup-quality frontman was even more important. During an interview in the early 2000s, the normally blustery Gene Simmons confessed to me that the 1980s were a difficult time for his band KISS, who’d tried to remain relevant amid the hair metal explosion by removing their Kabuki-style makeup and amping up the sexual content of their lyrics to even more absurd levels. “It was the ‘pretty boy’ time, and I couldn’t be that,” he recalled. “I’m six-foot-two, and I don’t look Swiss. You had Warrant, Poison, Cinderella and a lot of other really good-looking bands with coiffed hair and flawless skin, and we tried to play that game.”

But as the book makes clear, many of the major players of the hair metal era were not only profoundly influenced by KISS’s 70s-era music and explosive stage show, but opening for KISS also gave a huge career boost to many 80s hair bands. (One sly running gag in the book is how often Simmons and his cohort Paul Stanley — ever the savvy Jewish businessmen — try to induce these rising stars to sign production or management deals with them, to no avail. While stoked to be courted by their childhood idols, the young up-and-comers all correctly surmise that they’ll be better off without Gene and Paul’s overbearing input.)

Though Judas Priest, Scorpions, Ozzy Osbourne, Iron Maiden and Def Leppard all received plenty of airplay in the early days of MTV, American metal (aside from Van Halen) was largely absent from the national TV and radio airwaves until the one-two punch of Quiet Riot and Twisted Sister broke through to the mainstream in late 1983/early 1984. Both bands had already been around for years when they found massive success against all odds (and despite considerable industry pushback), and each were guided through numerous hardships and lineup changes along the way by Jews — Quiet Riot’s late frontman Kevin DuBrow, and Twisted Sister founder and guitarist Jay Jay French. Once these bands managed to kick open the door to the Top 40 with their hits “Cum On Feel the Noize” and “We’re Not Gonna Take It,” the 80s hair metal gold rush was officially on in America. “We didn’t think [Kevin’s] look went with us,” original Quiet Riot bassist Kelly Garni recalls in the book, “but he was extremely persistent and knew how to create a band and drive it forward, and we really kind of lacked that.”

“I didn’t know that Kevin DuBrow was Jewish until you mentioned it,” Nöthin’ But A Good Time co-author Beaujour told me. “But I will say that both he and Jay Jay had the ‘hustle’ often associated with members of our faith. [The success of their bands] was due to determination and persistence, not some surfeit of musical talent. These guys were all very attuned to the ‘show business’ aspect of being in a band and likely pushed their bandmates to do things that they were not necessarily completely comfortable with [in order to succeed].”

“I have to admit that unlike say, punk, I’ve never really thought too much about the fact that some of these guys are Hebrews,” adds co-author Bienstock. “As a kid, I felt more kinship with Gene and Paul for their curly hair than for their Jewishness. I think I was more conscious of the Jews in punk when I was growing up, because punk was a world where your heritage was allowed to shine through and was actually celebrated… or at least was part of the shtick. Whereas in hair metal, it was all about adherence to a certain, fully non-ethnic look. Your hair is kinky? Try to straighten it! Follicly challenged? Get a wig or extensions!”

Ironically, that same classic bleached-and-straightened “hair metal frontman” look — as personified by such glam goyim as Vince Neil of Mötley Crüe, Bret Michaels of Poison and Jani Lane of Warrant, among many others — derives directly from the distinctly non-Aryan likes of David Lee Roth. Roth, of course, swiped that look wholesale from Jim Dandy Mangrum, the priapic blonde frontman of hillbilly heavies Black Oak Arkansas; but while BOA was almost entirely forgotten by the time the 80s rolled around, Van Halen’s musical and sartorial influence was absolutely massive on the next wave of metal warriors.

For their part, the authors don’t find the number of Jewish participants in the hair metal scene to be particularly remarkable, at least among bands hailing from this country’s two biggest cities. “New York and Los Angeles are the number one and two cities in America in terms of [Jewish population],” Beaujour explains, “so the odds were higher that there would be at least one member of the tribe in any band hailing from one of the two burgs.”

At the same time, Beaujour and Bienstock acknowledge that they were surprised (as was I) to learn that Guns N’ Roses lead guitarist Slash (who was born Saul Hudson) and irrepressible Poison lead guitarist C.C. DeVille are not actually Jewish. “For several decades, I did think that C.C. must Jewish because of his schnozz and his Brooklyn accent,” Beaujour laughs. “Once I learned that his real name was Bruce Johannesson, I realized that I was probably wrong. I was bummed.”

How the gods of hair metal worshipped the Borscht Belt hustle