Shrimp in your Cinnamon Toast Crunch? Your cereal might still be kosher 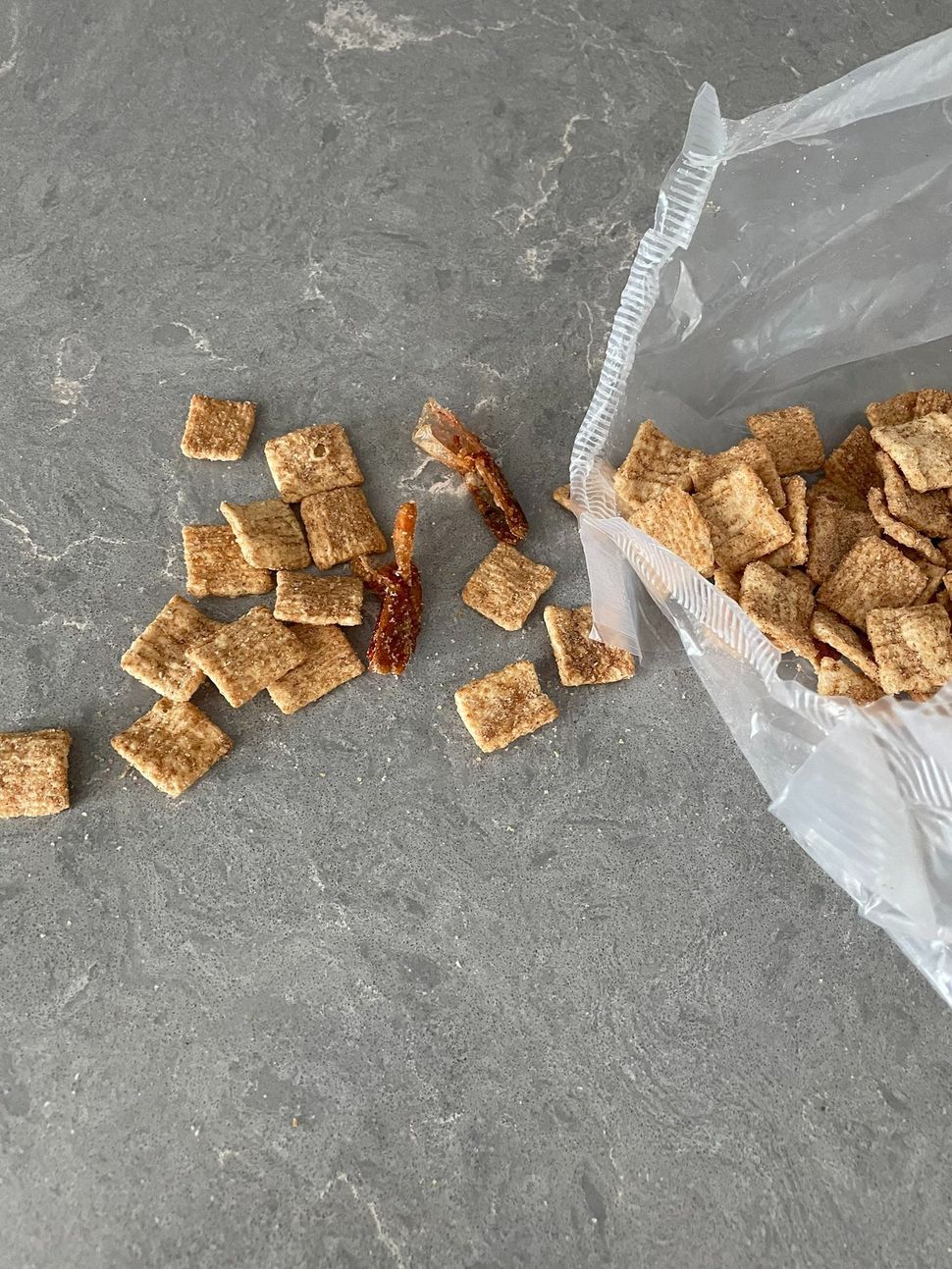 The shrimp tails in the cereal. By Jensen Karp/Twitter

Cinnamon sugar-crusted shrimp sounds like a questionable appetizer at a haute-cuisine restaurant — you know, the same kind of food trend that gave us everything bagel ice cream. Instead, the shellfish in question came out of a box of Cinnamon Toast Crunch cereal, into the bowl of Twitter user and comedian Jensen Karp, whose tweet about the event quickly went viral.

The FDA allows surprisingly large amounts of bugs, rodent hair and feces in foodstuffs — the specifics vary by food — but the cereal is subject to another set of rules as well: kashrut. Shrimp are rather famously not kosher (feces and bugs are also problematic; Karp found what he claims to be rodent feces in his cereal as well).

In the time since the Cinnamon Toast Shrimp saga went viral, Twitter users have done their due diligence, alleging that Karp abused women in the music and TV industry. This led to a growing suspicion that the shrimp saga was created for attention and internet points; Cinnamon Toast Crunch appeared to agree — they released a statement saying the shrimp tails appeared not to be shrimp at all, but instead “an accumulation of the cinnamon sugar that sometimes can occur when ingredients aren’t thoroughly blended.” This seems unlikely; the objects appear to be shrimp, though I have no idea how they got there. You can draw your own conclusions.

Ummmm @CTCSquares – why are there shrimp tails in my cereal? (This is not a bit) pic.twitter.com/tTjiAdrnVp

Ok, we’ll after further investigation with my eyes, these are cinnamon coated SHRIMP TAILS, you weirdos. I wasn’t all that mad until you now tried to gaslight me? https://t.co/7DmADmoqUt pic.twitter.com/rSLE60pvoy

Real or fake, however, the incident brought up many questions about kashrut. If the shrimp situation is real, what happens?

I would have assumed that shrimp tails in cereal would be a major issue for the kosher certification of the cereal, and the entire factory it came from. But according to Rabbi Norman Schloss, a mashgiach (kosher overseer) at OU Kosher, one of the largest kosher certification bodies, that’s not the case.

“From a 100% halachic [Jewish legal] point of view, let’s say that there was something like that in the cereal, all you have to do is take that out and eat the rest of the cereal,” Schloss told me by phone.

Schloss seemed remarkably blasé about the whole situation; in his decades with the OU, he’s seen most concerns boil down to accidental error on the consumer’s part. A woman who found pork in her kosher vegetarian baked beans, for example, had actually just bought the wrong can. While he does not personally oversee General Mills, Schloss expressed full faith in the cleanliness and shellfish-free nature of the company’s premises.

Still, I was confused by how unconcerned he seemed to be. Shrimp is one of the most famously non-kosher foods out there, perhaps second to bacon. But, as it turns out, kashrut is not so simple.

I reached out to Rabbi Mendy Chitrik, who oversees kosher certification operations in several countries, including Turkey and the United Arab Emirates, to better understand the finer points of the rules. He too doubted the reality of the shrimp incident, yet consented to walk me through a collection of examples he’s seen over his years in the kosher supervision business, and patiently considered several shrimp-based hypotheticals I posed to him: What if shrimp was on a piece of bread, but then removed — is the bread kosher? What if it’s not a full shrimp, but just a small piece of shrimp in the food, similar to the FDA insect loopholes? Chitrik was also gracious about the sound of my roommates cackling in the background as they listened to my side of the conversation. 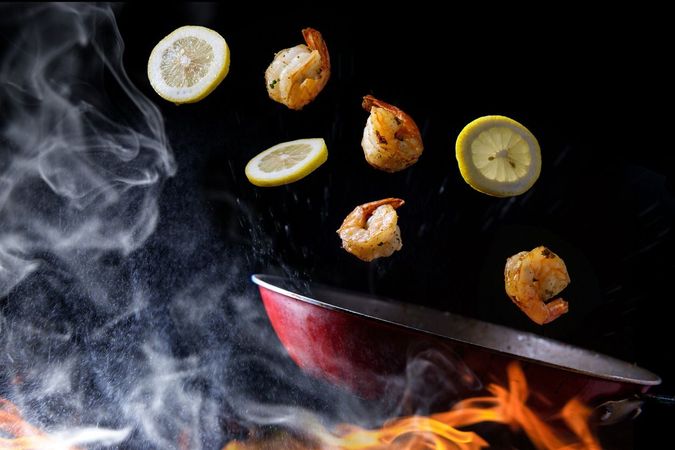 This dish is definitely not kosher because it has been heated. Courtesy of iStock

“Heat, liquid, transfer of taste, pleasant taste — these and some other rules come into play to determine whether a food is still kosher,” Chitrik explained. Things that have been heated together, or liquids that have been combined, are more at risk of contamination by a non-kosher substance; dry or unheated foods can brush against non-kosher substances without contamination, meaning shrimp that were not cooked in with cereal should not contaminate the box.

Kashrut seems beholden to minute technical rules, but there is actually a large amount of subjective philosophizing that could theoretically go into determining the kosher status of food. Chitrik said there is even debate about whether non-modest packaging or unethical treatment of workers falls under the domain of a rabbi’s hechsher. While at the commercial level, these questions are not considered, it is part of a larger debate, which Chitrik called “meta-halachic.”

Chitrik shared a story from the Talmud considering the effect of a rat on soup. Rats are not kosher, but let’s say one fell into the vat. After the rat is removed, determining whether the soup remains kosher requires a decision on whether the rat affected the taste of the soup, and whether that change added a pleasant or unpleasant taste — the answer to which might be very dependent on hunger.

The one-sixtieth rule, also known as the rule of bitul shishim springs from this question of taste. If the contaminating item is less than one-sixtieth the size of the whole, it is considered nullified, because one-sixtieth is a small enough amount that it will not impact taste or otherwise change the character of the food. Still, this applies only to instances in which the contaminating substance cannot be removed, such as liquids, purees, or mixtures of fine powders such as flour; if you can find and remove the offending substance, you must. If the offending substance impacts the overall taste or form of the food — think spices, or rennets that turn milk into cheese — then it is also forbidden. And the non-kosher addition must be accidental. 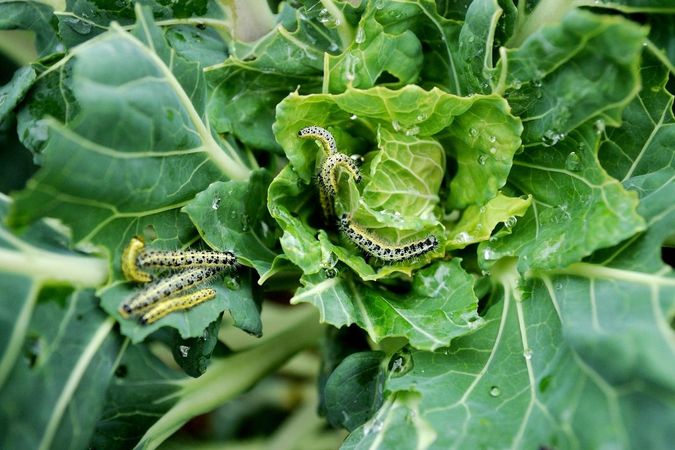 The caterpillars on this lettuce are visible with the naked eye, thus this lettuce cannot be sold as kosher (until they’re removed). Courtesy of iStock

There’s also the question of how hard one is obligated to look for contaminating items such as insects. Must they be seen with the naked eye, or are even microscopic pests an issue? Chitrik gave the example of mulberry puree versus apricot. Apricots are rarely infested with insects, so an apricot-based puree does not require extra scrutiny, but mulberries are known to frequently be infested with bugs and thus you are required to check carefully.

The rabbi recalled a product with mulberry puree that had passed all health agency inspection, but was rejected by the Israeli rabbinate for its bug content. “Insect prohibition is a biblical prohibition. So it might pass the FDA tests, and they might not be very worried about the extra protein,” said Chitrik, but the kosher stringencies are more severe. “The FDA is concerned about physical well-being, but the kosher inspections are about spiritual well-being, and they don’t always go hand in hand.”

Chitrik explained that most of these Talmudic philosophical debates sprang from a time of poverty; when the rat-contaminated soup might be the only soup you can afford, the issue of whether you have to throw it out becomes pressing, and the flavor added by a rat becomes worth debating. By the standards of kosher-certifying agencies today, there should be no question about the kosher status of the food, and no need for exemptions or special rulings.

Except when you find shrimp in your cereal. From what I’ve gleaned from my discussions, it all depends on when the shrimp entered the box; if they were cooked in with the cereal squares, the box is indeed non-kosher. If they were added later, you can technically pick them out and keep eating — it all depends on whether the whole incident truly happened at a General Mills plant, or after the fact, a question which is still being hotly debated on Twitter.

But really, according to both common sense and religious law, if you can afford to throw it out and eat something else, you should.

Shrimp in your Cinnamon Toast Crunch? Your cereal might still be kosher