Mark Bittman is calling for a revolution 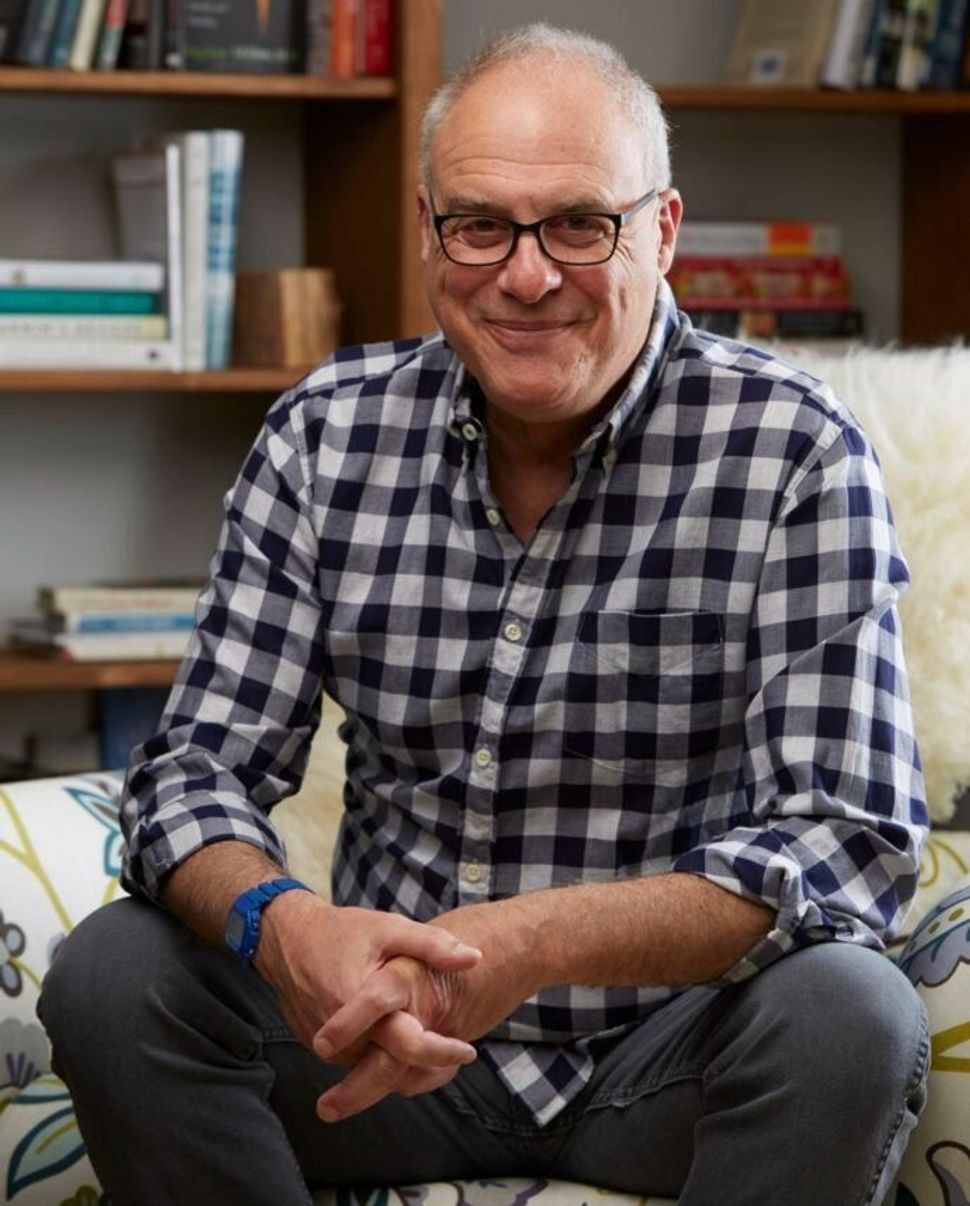 Animal, Vegetable, Junk: A History of Food, from Sustainable to Suicidal

It’s fun to pee while walking in the ocean drinking a beer; it’s psychopathic to poop while sitting in the tub counting your money.

Sadly, though, we humans are now essentially engaged in that sick behavior. We are well into the Anthropocene — “The era in which humans have changed the face of the Earth and will determine its future.” That means our human activity is now responsible for the state of the world’s environments and how liveable they are. In this era we are massive enough as a species to treat the oceans as our bathtub but, apparently, we are not smart enough as a species to realize that we are sitting in our waste. We are in danger of irremediably defiling not only the oceans, but also the earth that grows our food and the air that we breathe.

This is the excoriating critique of capitalism and colonialism that bestselling cookbook writer and food writer Mark Bittman offers in “Animal, Vegetable, Junk.” The triangulation that he presents is, mostly, actually, not the three words of the title that describe foodstuffs. Mostly he’s talking about the triangle of humans, the Earth and food. Humans live on the Earth and derive 100% of our food — an essential component of human life — from the Earth. Unfortunately, the systems we have set up to manage the planet and provide us with sustenance are jeopardizing our food, our health and our home.

These simple facts have been clear for at least 50 years; we’re only talking about them now because in their critical urgency and potential irreversibility they have finally begun to affect privileged communities. That is to say, it’s only recently become clear to the global elite that it’s their own bathtub they’re bemerding and, in typical one-percenter fashion, they are as interested in escaping the effects of ecological disaster they are causing the top 1% produce as much carbon dioxide as the bottom 50% as they are in fixing it. 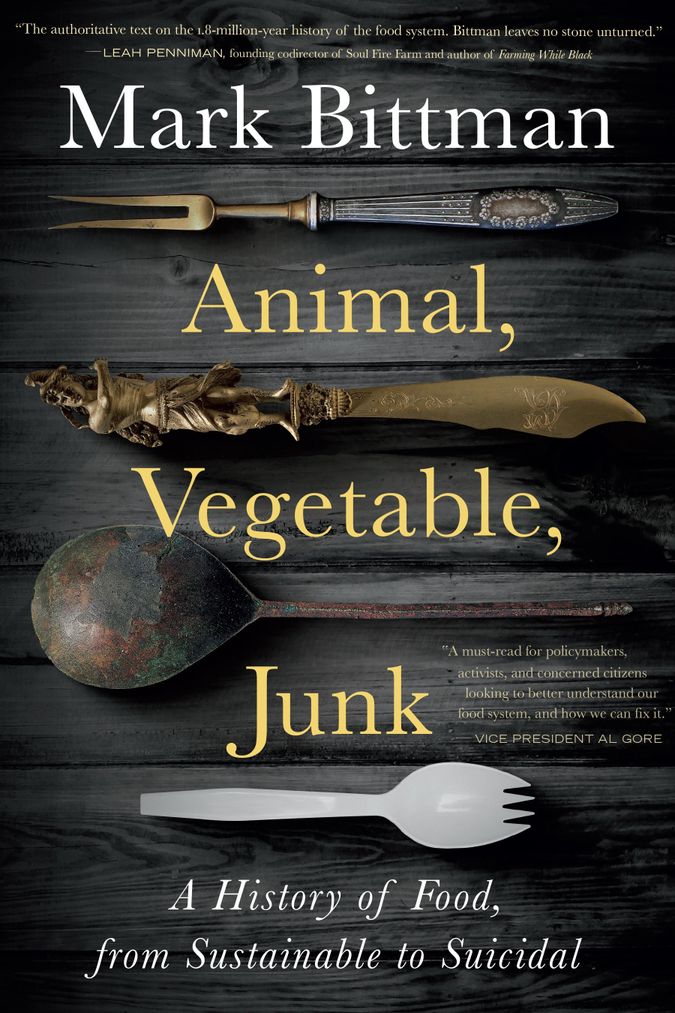 Though he points out in chapter seven that “food is political,” Bittman is more concerned with the systems that have driven us from “sustainable to suicidal” than the local politics. He certainly doesn’t dig around in the demographics of blame as I just have, though he does point out that systems have instigators and victims. Clearly race played a part, as “Black Americans and Indigenous people… each suffered uniquely,” but the systems are designed to maximize profit no matter what tools are used, so “class divisions and disenfranchisement went beyond race.”

As American farmers’ wealth grew, the “mostly white middle class depended on an ever-growing underclass of immigrants.” That meant the American dream of a new start in a new country was not available to most new immigrants. “Filipino, Mexican, Chinese and Japanese migrants, as well as the original Exodusters who arrived in California, may have escaped famine and death in their homelands, but they were hardly guaranteed better lives in the United States.” Laws and customs meant that new arrivals were “denied landownership” but were even more vulnerable to export-market vagaries than landowners.

Bittman is no fan of Chinese or Russian Communism and his critique includes the millions dead as a result of those systems and their leaders, but taken as a historical whole and as a contemporary challenge, colonialism and capitalism have had a higher body count and are more significant threats. In a recent podcast with Ezra Klein, Bittman says he took inspiration for the project from Yuval Harari’s “Sapiens.” Where Harari traces the whole history of “humankind,” Bittman presents a history of humanity — from pre-history to post-Twinkies — through the lens of food. It is phenomenally depressing.

Writing between the wars, John Maynard Keynes noted that “decadent international but individualistic capitalism, in the hands of which we found ourselves after the war, is not a success. It is not intelligent, it is not beautiful, it is not just, it is not virtuous—and it doesn’t deliver the goods.” Capitalism isn’t a mode of governance, it is a supremely successful extractive technology. It is a system without peer for exploiting the richness of the Earth and concentrating it in the hands of a few humans. Unfortunately, we are at a stage in history where the by-products of the technology are poisoning the planet and, even with curbed pollutants, the system itself is unsustainable. We have passed peak soil.

In describing the California Gold Rush, Bittman explains the metaphor of “land-mining.” And, if you’ll pardon my pun, it proves to be perhaps the most fertile metaphor in the book. Panning or prospecting for valuable ore, he tells us, “sported lottery-like odds. It didn’t take long for most new Californians to realise that ‘land-mining’ — American-style agriculture — could produce more money, more reliably.” He traces California as a metonymy for American farming, ever expanding holdings, use of aquifers, monoculture, crops for export. But the phrase “land-mining” is most telling. Soil is an organic, sustainable part of the ecosystem. As hunter-foragers for hundreds of thousands of years, humans were not disturbing the soil; as traditional farmers for tens of thousands of years we learned to replenish through rotating crops, planting multiple crops and by making the farming part of a closed system where what gets taken out in crops gets replaced in a usable form for growth. In mining, of course, the ore is extracted and exported — it is not intended to be replaced and would take millions of years to be replaced. Soil and water are, theoretically, renewable but are not renewed when agri-business is engaged in “land-mining.” Aquifers that took eons to fill are drained, guano that took millennia to pile up, is exported and the rich fertile topsoil is simply used and removed – “Iowa, for example, has lost about seven inches of topsoil since the Europeans took over.”

The improbable sweep of time that Bittman covers in the first two thirds of the book only goes to show quite how anomalous our contemporary world is. Not only the super-concentrated monocultures that are denuding the soil or, in the case of CAFOs (Concentrated Animal Feeding Operations), poisoning every aspect of the surrounding environment, not only the mass marketing of foodstuffs that are actually detrimental to health, or the extreme inequities in food and wealth distribution, but the very possibility – the hubris even – of land ownership are new and, without a sense of responsibility or stewardship, “suicidal.”

The great power of modern scientific thought is how it analyzes the natural world. The ability to take the substance of matter apart and understand its individual chemicals, genes, atoms has given us incredible insight into how things work and power over making them work. But, sadly, our insight into the interconnectedness of ecosystems and our power to effect our actual desired outcomes — our ability to shape a just, sustainable world, has not kept up. The capitalistic technology that incentivizes “land-mining” at the cost of the land and ever more sophisticated communications technology to market “junk” (what Bittman also calls “ultra processed foods” or UPFs) at the cost of our health simply does not encourage the plentiful, sustainable, equitable nourishment that is key to human life on Earth.

Neither simple capitalism nor the global hybrid model that drives the current world economy take account of costs external to each of the millions of profit-driven transactions. Unfortunately, a number of those externalities – the uncounted effects of producing UPFs or vast, unhealthy amounts of meat for a small proportion of the world’s population — are prejudicial to human survival. You know about externalities such as cyanide poisoning from gold mining or cancer from power generation (like “Erin Brockovich”) but “Food” producers are also complicit in famous “externalities.” Big Ag is a major reason there’s so much poop in our bathtub: using massive amounts of non-recyclable plastics, poisoning our drinking water, and playing a “huge role in greenhouse gas emissions, even rivaling those of the oil and gas companies.”

Make no mistake, this book is a call for massive reform or even revolution.

“Although it’s immoral and cruel, and overseen by mostly immoral and cruel people – only a few of whom were sadistic masterminds – the system is largely the result of incremental decisions, some made as far back as ten thousand years ago, others recently,” Bittman writes. “One thing is certain: The future isn’t set. There is time to change how we grow and what we eat.”

What is at stake is human survival on Earth.

Mark Bittman is calling for a revolution