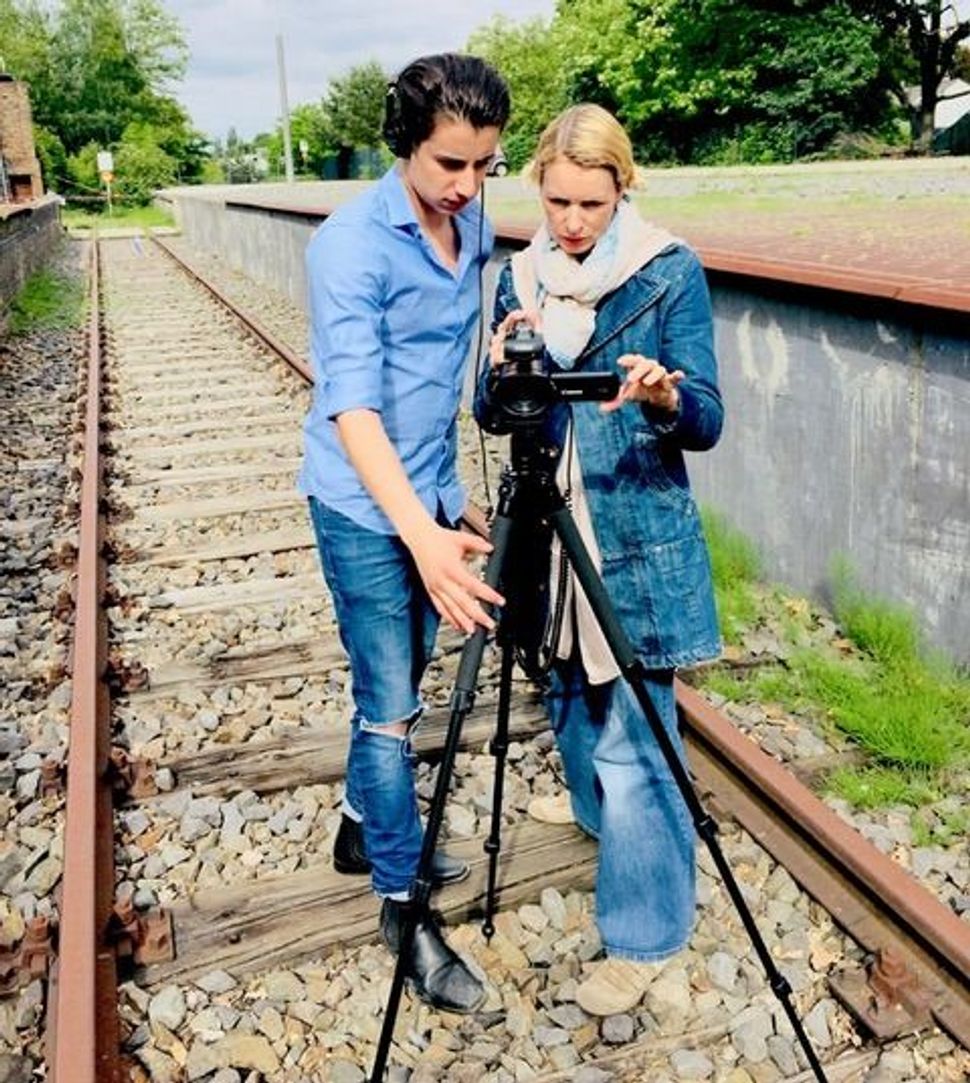 Baron, 55, grew up in a Berlin with no visible Jewish life; filling that absence was a profound sense of guilt. Shabaev, who turns 21 in April, is a member of a thriving Jewish community and part of a generation committed to thinking beyond the pain of historical memory. In 2019, the two collaborated on the short film “L’Chaim,” a production of BYkids, a global educational nonprofit that teams young filmmakers with mentors to produce documentaries. The film debuts on national public television April 6.

“One of the first meetings I had with Semon was very surprising,” said Baron, the Emmy-nominated director of the film “Last of the First,” about the Harlem Blues and Jazz Band. “He said ‘Look, We all live with the memory of the Holocaust and we are all incredibly marked by the historical burden.’ But he also said, ‘I really do want to make sure we do not get defined by just being a victim or by the question of antisemitism.’”

“L’Chaim” tracks Shabaev’s life as an active member of the Olam Berlin Jewish youth group and a young person in a city where brass stumbling stones mark the site of the arrests of German Jews in the 1930s. In less than 30 minutes, the film details the balancing act of paying homage to the past while living for the present through community outreach and a Eurovision-inspired contest singing contest called “Jewrovision.”

Shabaev, who wears a ribbed beanie over a frizz of dark hair, was born to parents who, like many after the fall of the Berlin Wall, moved to Germany from the former Soviet Union. His cohort is among the first major waves of German-born Jews in decades and one that sees little conflict in living Germanly and Jewishly.

In Baron, who lived in the U.S. for nearly 30 years before returning to Germany, Shabaev said he found an “American godmother.” He’d been making amateur films for a little over a decade when they connected for the project, but says he learned a great deal about working the camera and deciding what to shoot from her.

In the film, history is a constant presence. Contemporary shots of the Brandenburg Gate are juxtaposed with archival video from the time of the Reich. Shabaev and Baron film a Holocaust Remembrance Ceremony and speak to members of the Central Council of Jews in Germany and Rabbi Joshua Spinner, CEO of the Lauder Foundation, to offer historical context. But it was a train track at a busy tram station that really drove the mission home for the filmmakers.

In one segment, Shabaev, his sister and his best friend, three young Jews sit and chat freely on Grunewald Station’s Track 17, on which Jews were deported. It’s now a memorial site and a place of eerie calm.

“It was the first chance for me to think about the Holocaust another way,” said Shabaev. “Before the film, of course I would think about it, but not so deeply.”

Two years have passed since the film wrapped, and Shabaev is about to start a course in law in Greifswald in northern Germany. Since he and Baron began the project there was a notable antisemitic attack on a synagogue in Halle on Yom Kippur 2019; a gunman tried to enter, but couldn’t break down the door. Despite this, Shabaev thinks that the climate hasn’t gotten worse or better when it comes to antisemitism.

“Two years ago we had antisemitism and now we have antisemitism, but I had never problems with them because I was very often with my Jewish life and my Jewish identity,” he said.