Just how Jewish were ‘The Arabian Nights?’ 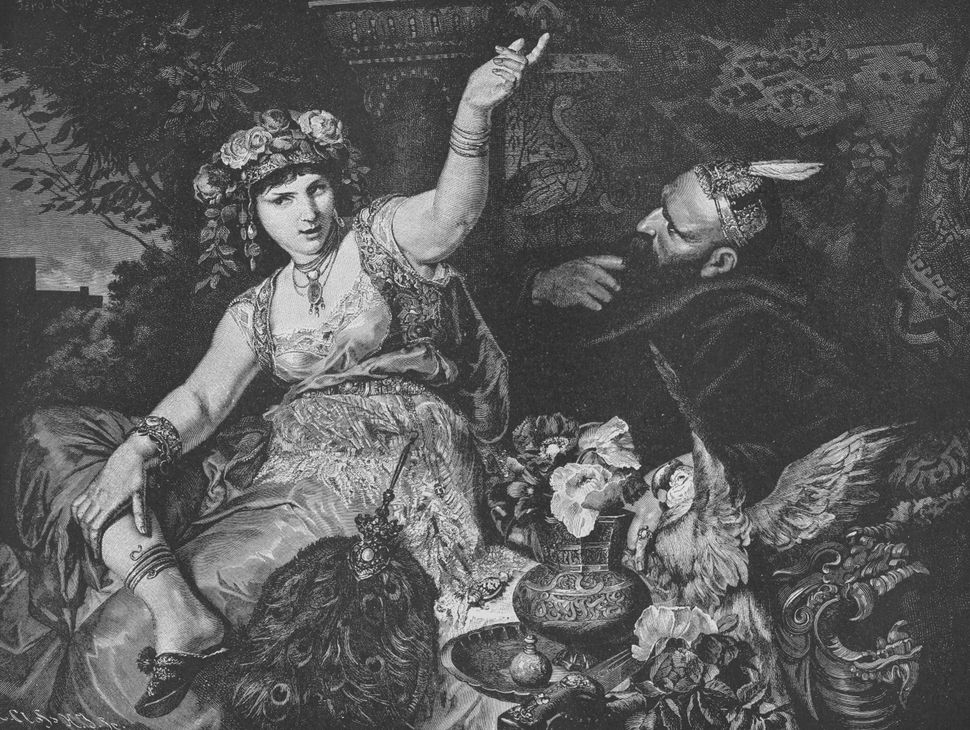 Last month marked the bicentenary of the birth of Richard F. Burton, the Victorian translator of “The Arabian Nights,” or “1001 Nights,” the medieval compendium of tales in Arabic about the storyteller Scheherazade, Aladdin, Ali Baba and Sindbad.

The stories date back over centuries across a wide range of national cultures, with the first trace printed in 9th century Iraq, so it is unsurprising that part of the lasting impact of “Alf Laylah wa-Laylah,” which Burton translated in 16 volumes as “The Thousand Nights and a Night,” should be its Yiddishkeit.

Historians have suggested that Burton, an explorer and ethnologist, resented the Jews for thwarting his diplomatic career when he was stationed in Syria in the aftermath of The Damascus Blood Libel.

Some years after that Syrian pogrom of 1840 Burton was seen as being less than sympathetic to the local Jewish population, and he was quickly transferred to Italy by the British Civil Service in a clear demotion.

Yet Burton’s attitude to Jews was complex and sometimes contradictory. When he died in 1890, The Jewish Chronicle termed his references to Jews “usually, if not invariably, marked by the tolerance and respect of a scholar.” In an 1869 account of his work as a consul in Brazil, Burton wrote, “Had I a choice of race, there is none to which I would belong more willingly than the Jewish.”

But he also authored “The Jew, the Gypsy and El Islam,” a book never published in full during his lifetime. Much of it consisted of a translation of an antisemitic French account of the Damascus Blood Libel.

Although “The Jew, the Gypsy and El Islam” lauds Jews for intelligence and longevity, it also observes that “their immorality is proverbial,” they are prone to “lying and cowardice,” and the Talmud is “vindictive.” Burton declares: “Obviously, such cruel and vindictive teaching … must bear fruit in crime and atrocities,” such as ritual murder of non-Jews, or the lethal, if fictional, Blood Libel.

Even so, Burton, according to historians Geoffrey Alderman and Colin Holmes, faithfully translated the “1001 Nights,” including stories with sympathetic Jewish characters, and others originating from Jewish folklore.

Orientalists have suggested that the storytelling framework of Scheherazade itself was inspired by the biblical Book of Esther. According to Persian tradition, Scheherazade was the mother-in-law of King Ahasuerus, Esther’s husband, who also enjoyed having stories told to him at night.

The researcher Victor Bochman asserts that Jews contributed stories to “The Arabian Nights,” resulting in many Jewish characters in the narratives, and some of the most devoted readers of the book have been Jews as well.

Among the former are accounts of pious Jews, appearing to echo Talmudic and midrashic legends. Two tales, “The Fisherman and the Genie” and “The Brass City,” tell of how King Solomon trapped misbehaving demons in copper jugs and hurled them into the sea. These themes may be traced back almost 2000 years to “The Antiquities of the Jews” by Flavius Josephus.

Other sources are even clearer. “Sindbad the Sailor” quotes proverbs from “The Book of Ecclesiastes”: “The day of death is better than the day of birth (7:1) and “A living dog is better than a dead lion.” (9:4)

Among Jewish women protagonists in “1001 Nights” is Zein al-Mawasif, whose name means “Embellishment of the Beauties.” She is so lovely that when she tries to divorce a Jewish husband, four judges dealing with her case die of unrequited love for her.

Elsewhere in the tales, Jews are rescued from danger due to their piety. Others are praised for intelligence and professional skills, as in “The Story Told by the Jewish Physician.”

More negative portrayals of Jews have been identified as reflecting antisemitic persecution that began to develop in Europe by the late eleventh century. Examples include “Three Princes of China,” featuring a murderous Jewish community in Iraq who receive their comeuppance when a Jewish leader is tricked into killing his own son. In another tale gloating over Jewish misfortune, “Masrur and Zayn al-Mawasif,” a Jewish husband is buried alive by a female slave. Inebriated Jewish pirates appear in “The Merchant’s Daughter and the Prince of al-Iraq.”

Still, when Jews around the world read “1001 Nights” in Arabic, the lingua franca in Spain and Portugal for many centuries, they were generally fascinated by the stories involving coreligionists.

The first Yiddish adaptation appeared in 1718, entitled “Shpigl fun der Welt” (Mirror of the World). A fuller translation into Yiddish appeared later that century in Germany.

By the time of the First World War, “1001 Nights” was such a familiar presence among Yiddish readers that Sholem Aleichem used the Sindbad tales to recount the travails of East European Jews in “Mayses fun toyznt eyn nakht” (Tales of a Thousand and One Nights; 1915). Sholem Aleichem described Jewish refugees fleeing antisemitic violence and starvation in the Old Country for better prospects in America.

Around the same time, the first Hebrew translations were made of “1001 Nights,” printed in Odessa and later Tel Aviv. Mostafa Hussein, an authority on Hebrew language scholarship involving Islam, has pointed out that among Hebrew authors enchanted with the “1001 Nights” was the poet Haim Nahman Bialik.

Indeed, Bialik perceived that the primary purpose of the original Arabic text was to reprimand potential sinners among the readership, and so it was an ideal instrument for teaching young students moral lessons and making them familiar with the Middle Eastern world. The sensuousness of its linguistic imagery also helped to revive the Hebrew language.

Introducing the first complete Hebrew translation, published in 32 volumes between 1947 and 1971, Yosef Yoel Rivlin, who had also translated “The Qur’an” into Hebrew, noted that “1001 Nights” offered readers a unique way of understanding Arab sensibilities.

This impression extended to later readers of “1001 Nights,” including the Canadian Jewish author Abraham Moses Klein. Like Sholem Aleichem, Klein associated metaphors of flights and escape in the “1001 Nights” with modern Jewish experience, alluding to the fact that the 1949-1950 evacuation of Yemenite Jews into Israel was known as Operation Magic Carpet, after a trope in “1001 Nights.”

Like Bialik and Rivlin, Klein saw the association of Islamic and Hebrew tradition as proof of the possibility of creative coexistence. As did Valentina and Zinaida Brumberg, Jewish pioneers of the Soviet animation industry, whose short animated film “Sindbad the Sailor” (1944) echoed the forced wartime evacuation of Soviet Jews to Central Asia, in another example of Jewish readers reacting with immediacy to descriptions of travellers of the “1001 Nights.”

Robert Rafailovich Falk, a Jewish artist who worked on “Sindbad the Sailor” (1944), described his wartime exile in Samarkand, Uzbekistan, as the “Bible and the tales of ‘A Thousand and One Nights’ harmoniously coexisting with an authentic Soviet reality all within the same ancient landscape.”

Regardless of the negative aspects of “1001 Nights” and its translator Richard F. Burton, the ethnographer Shelomo Dov Goitein was surely right to call it “that fabulous storehouse of folktales from many countries, peoples and social layers… [that] marvellous book.”

Just how Jewish were ‘The Arabian Nights?’