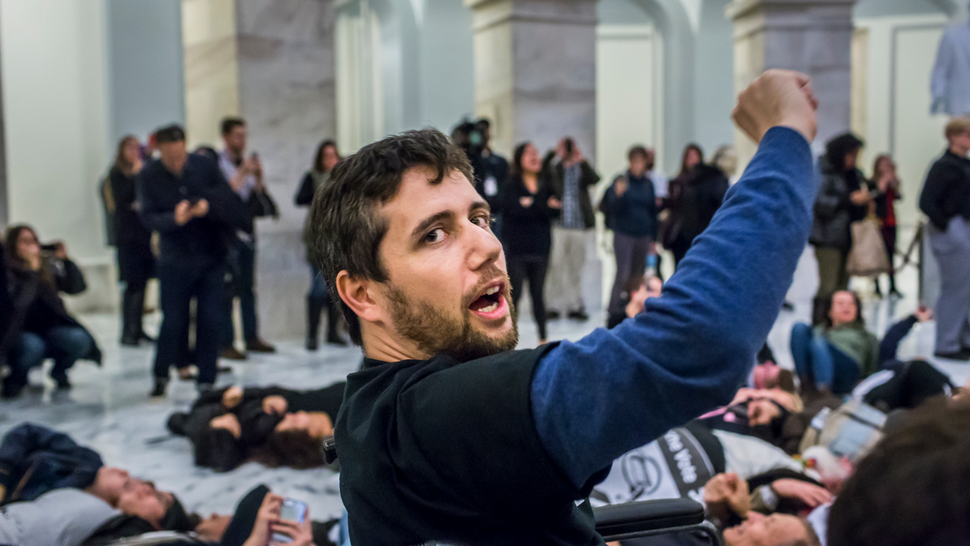 I challenge you to see Nicholas Bruckman’s new movie about Ady Barkan and not cry.

Actually, go ahead: watch and weep. The challenge was not yours, after all, but nominally mine as a reviewer of “Not Going Quietly.” A review assignment generally means trying to keep some critical distance from the cultural product so one can evaluate and explain its ambition, its merits and its flaws to you the reader. This film, though, is so deeply — and explicitly — tied up with its affect that there’s no way a responsible critic could avoid the subject.

For those of you who missed the 2017 viral video of Barkan on a flight from D.C. exhorting Arizona senator Jeff Flake to “be an American hero” and save the American Care Act (#flakesonaplane), Ady Barkan is an activist. Indeed, Politico called him “the most powerful activist in America” and much of that power in advocating for American health care reform comes from him being a mid-30s white man suffering from ALS. (He was diagnosed at 32, in 2016.)

Amyotrophic Lateral Sclerosis causes the irreversible deterioration of all muscles in the body, including all the muscles needed to move, talk, eat or breathe. It starts as a weakness, progresses quickly to a wasting and proceeds inescapably to total immobility, silence and, soon, death. The National Institute of Health puts it, chillingly, “Currently, there is no cure for ALS and no effective treatment to halt, or reverse, the progression of the disease.”

ALS is no respecter of strength; it can strike even the healthiest athletes. Doctors give newly diagnosed people four years to live. People like British rugby legend Rob Burrow, 38, who is currently stricken with the disease, or baseball hero Lou Gehrig can go from being a confident, articulate championship winner to a speech-slurring wheelchair-bound invalid in a matter of months. Because of its visible and intractable nature and because it can strike otherwise perfectly young, healthy people, it is profoundly moving.

Barkan, brought up in California with dual American and Israeli citizenship, went to Columbia as an undergraduate and Yale Law School before starting work as an activist. His eloquence and politics predate his illness, but they also enabled him to see the unique position that ALS would give him as an advocate. When asked on “Nightline” by Juju Chang whether she thought she was exploiting Barkan’s sickness for political ends, viral filmmaker activist Liz Jaff (one of his main post-illness political allies), responded “Absolutely.” As Barkan himself puts it “the weaker I get, the stronger my voice.”

What is fascinating about “Not Going Quietly” is that the activism takes a back seat. Unlike Barkan’s work between his diagnosis and the 2020 election, including his 2019 memoir “Eyes to the Wind: A Memoir of Love and Death, Hope and Resistance,” the film is actually not primarily concerned with the activism. Yes, the film is formally structured around his testimony to a congressional committee hearing on Medicare for All, and yes, the bulk of the film follows his political travails, but by that logic “Citizen Kane” is about newspapers. The election fights of 2018 and 2020 have been fought, the audience for the movie is not politicians or voters, but Carl Barkan, Ady’s son.

Carl had just been born when his father was diagnosed. Ady and his wife — the smart, saintly college girlfriend, now tenured professor, Rachael King — had to make a decision about the tiny sliver of time they had left together. How far could Barkan be the father and family man he dreamed of being, albeit for a scant few years, and how far could he be an activist of greater potency than he could have imagined? With some foresight and some force of circumstance, they chose the latter.

From its first minute when congressman James P. McGovern introduces Barkan with a family photo and says “I’m sure your son is incredibly proud of you,” this film is an attempt to make McGovern’s platitude the actual truth. It is an extended explanation — really a plea — to Carl, to understand why his parents chose to act the way they did. How, even in the face of tragedy, they were united “in search of a story that ended in something more than tragedy.”

“By far the hardest part of the disease is losing all the time with Carl.” Barkan says to the camera before he sobs, in a shot that is pitilessly long for the audience and surely, too, will be raw for Carl whenever he watches this film after his father has passed.

As we see Carl grow from babe in arms to toddler and to pre-K student, he develops the skills his father loses. He learns to walk, to talk, to draw as Ady loses the ability to do these things. In just one of the achingly painful scenes of pathos, Carl is sitting on his father’s lap. It is after Ady can no longer speak and his voice is rendered, like Stephen Hawking’s was, by computer and eye-gaze technology. “Can we watch another toy firetruck video?” Carl asks? “No or yes?” he asks patiently. “Yes or no?” After a laborious pause, Ady says “Yes” through the computer. “OK,” says Carl. “Now you know how to talk,” says Carl, “Good for you!” And he flashes his smiling, voiceless father a toddler double thumbs-up.

We are all mortal. We all see our strength ebb and our abilities fade as the next generation takes up the baton. Thankfully, though, most of us do not have to face such a stark choice as Ady Barkan between the mark we can make and price we must pay. With only 1,000 days left, the famed life/work balance suddenly becomes a Faustian bargain. On one side of the scales we must weigh our new family and newborn son while, on the other side we see a real, potent urgent chance to make a difference to the lives of tens of millions.

Barkan doesn’t simply abandon his family, though the film focuses on the time he’s away. Furthermore, given the parlous state of American health care, he has to engage in activism even to be able to withstand the costs of his own illness. His choice to fight for health care, his allyship with Jaff, his founding of the “Be a Hero” foundation, these are all ways of making his illness count for his own family as well as millions like his. If he doesn’t have an effect, his sacrifice — and that of Rachael and Carl — will be for naught. But the cost is the time with Carl.

On his travels around the country to train activists, address crowds and bird-dog politicians, Barkan meets other people unsupported by American health care whether through illness, or disability. In Austin, Texas, he meets for the first time a virtual colleague of his, Jake Koten. Koten, who has recently been diagnosed with ALS, and his partner are expecting a baby. She explains, “as it gets closer it gets more real and more terrifying, but I also think it’s like a leap of faith. Of saying that we don’t just want to live in fear, we want to find joy and happiness.”

It’s an insight Barkan takes to heart. By the close of the film, an exhausted Ady is home again, silenced by the tracheostomy he needs to breathe, and almost fully paralyzed. He has the expressed thanks of Elizabeth Warren, Nancy Pelosi and Alexandria Ocasio-Cortez and is on the Time 100 List of the most influential people of 2020. But, most importantly, he has a new baby daughter, Willow. His letter to her is a reprise of the film to Carl but also, significantly, King explains that she has been supported so much by her sister and she wanted Carl to have that relationship in his life.

“If I can hustle, despite all of the challenges in front of me,” Barkan tells Ali Velshi on MSNBC, “then everybody can get out there and make sure we have a wave election.” The manifold challenges are spelled out graphically in “Not Going Quietly” but also the success of the wave election. This film is a response to the question, “was it all worth it?” I hope so, after viewing the movie, if there was one family you wouldn’t begrudge having it all, it’s Ady Barkan’s.

“Not Going Quietly” will be the closing film at the Meyerson JCC’s ReelAbilities Film Festival: New York, presented by the Meyerson JCC.It is available to stream until Wednesday, May 5, 11.45 p.m. There will be a live Q+A with Ady Barkan, Liz Jaff, director Nicholas Bruckman and producer Amanda Roddy on Wednesday May 5 at 7pm