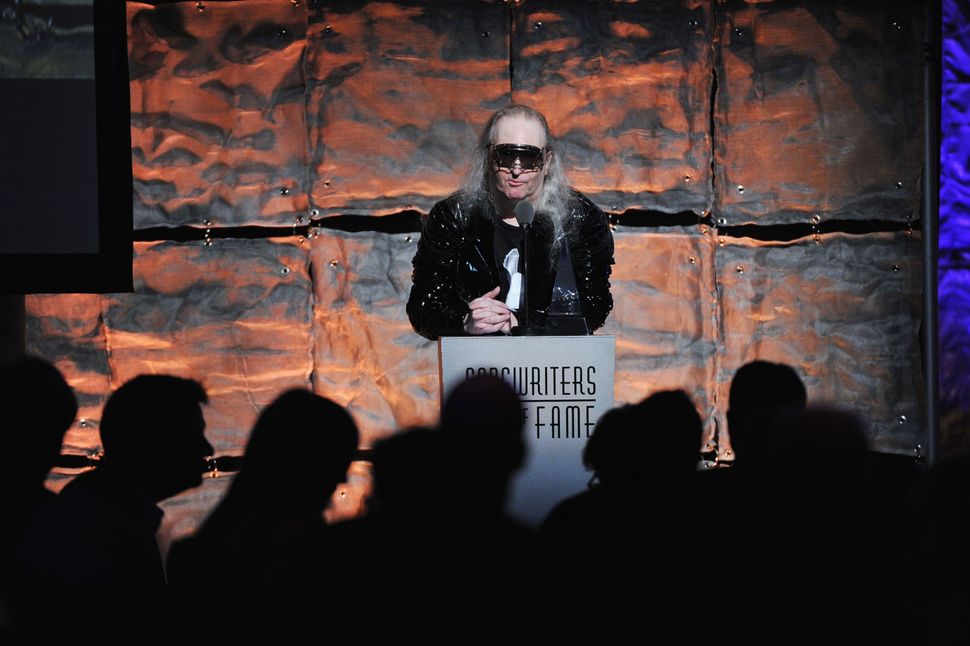 Jim Steinman was the best kind of weird.

The Grammy-winning songwriter, known for his epic rock compositions for Meat Loaf, Celine Dion and Bonnie Tyler, died Monday at the age of 73, TMZ was first to report.

Steinman’s songs were unmistakable in their bravura, musical theater influence and vampiric subtext. Yes. “Total Eclipse of the Heart” was described by Steinman as a “vampire love song.” Steinman loved bats. He wrote “Bat out of Hell” (two parts of it!) for Meat Loaf, a lost Batman musical and a musical film remake of Roman Polanski’s “Dance of the Vampire.” He was also very into motorcycles and extended baseball metaphors about sex.

I’ve long held that the composer, who was born in New York City on November 1, 1947, had an internal continuity to his work connected by his obsessions with Draculas, sex and motorcycle crashes. (Just watch the music videos for “I’d Do Anything for Love,” Celine’s “It’s All Coming Back to Me Now” — and, as a treat, the uber-goth original.)

A look at his early output confirms this hunch. He started writing music while at Amherst College for a production of a Bertolt Brecht play and later contributed material for a summer stock production of “Baal.” By 1969, he was at work on a musical called “The Dream Engine,” where he played a character named, you guessed it, Baal. One song had the familiar lyric “turn around bright eyes.”

Steinman’s resume is as long and daunting as most of his songs. Newly out of college in the 1970s he became a popular writer for belters like Bette Midler while developing his musical theater passion projects. On one of those shows, “More Than You Deserve,” he met an actor named Marvin Lee Aday. Their partnership would span four decades under the singer’s moniker: Meat Loaf.

“I thought he was astonishing,” Steinman said of first meeting Meat, who auditioned for him and the Public Theater’s Joseph Papp. “He’s just one of those people who walks in and it’s the equivalent of an enormous cat pissing on the door. Just stakes territory immediately. Just charismatic and he wasn’t the character of Meat Loaf then, he was much more like this enormous inflated farm boy. He wore like overalls, he didn’t have that much experience singing rock and roll specifically.”

If someone other than Meat Loaf is responsible for shaping that rock persona, Steinman deserves the credit. He made the man a genre.

Even at a time where rock music embraced melodrama, Steinman’s lyrics and orchestrations were over the top and his runtimes bloated. But as he once told the New York Times’ Dave Itzkoff “If you don’t go over the top, how are you ever going to see what’s on the other side?”

He was a genius at hamming it up and, often, incorporating some excessive trappings of the occult or dystopian. He was also insanely clever as a lyricist playing with structure. While many pester Meat Loaf about what “that” is in “I’d Do Anything For Love (But I Won’t Do That”) it’s all there in the lyrics. Towards the end, we hear he’s responding to an interlocutor who suggests that “sooner or later you’ll be screwing around.”

It was perhaps too easy to dismiss Steinman’s schmaltz, but there was no mistaking the power of his brand and its willingness to get inventive.

Steinman rarely gave interviews toward the end of his life, but speaking to iHeart Radio on the occasion of the “Bat Out of Hell” musical, he offered the play’s thesis and the key to his body of work — which isn’t necessarily all about bats.

“Young people aren’t helpless,” Steinman said. “They’ve got the youth and youth is power. Don’t be afraid to feel, to love and to inspire change – it’s your turn. That’s been my message and will always be my message.”