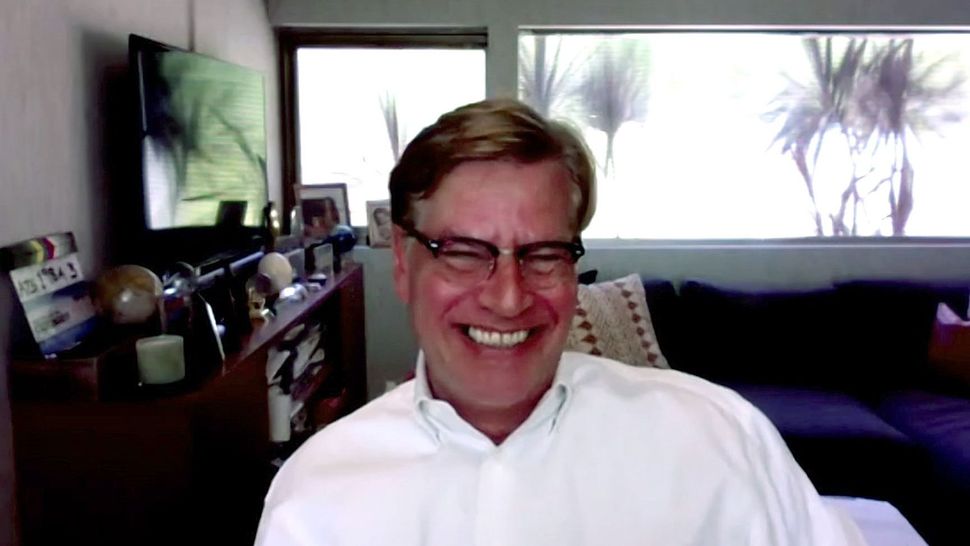 Here are some things I’ve learned from Aaron Sorkin. Harvard was founded in 1636, but there’s a statue on campus that says it was founded in 1638. The Bible forbids planting different crops side-by-side. The street name for chloroacetone is tear gas. The best way to seem smart and articulate is to rattle off obscure facts in the presence of dumber, less articulate people. The origins of the Tom Collins are disputed. Jackie Robinson’s older brother won a silver medal at the Olympics. It’s possible to know everything about everything, and absolutely nothing else. The strawberry is the only fruit with its seeds on the outside.

In the 10 years since he won an Oscar for writing “The Social Network,” Aaron Benjamin Sorkin has been more or less consistently uncool. Successful, productive, nominated for awards, but never cool. In part, this is because he was briefly cool in the 90s, when “The West Wing” debuted, and few things that were cool 20 years ago remain so today. In part, it’s because liberal centrism has been uncool for a while now, and Sorkin, whose heartfelt trust in bureaucracy run by smart, good people is palpable in everything he’s written, is a center-leftie to his core. And in part, it’s because Sorkin has a rare, Franzen-esque gift for gaffes and apologies that devolve into more gaffes.

A shorter way of putting all this is that he’s the strawman Boomer people are always condemning on social media, except that he’s not a strawman but an actual man.

He is also an excellent writer — apologies if this is stating the obvious, but when Sorkin knockoffs and Sorkin gaffes outnumber Sorkin screenplays so drastically, the obvious is easy to forget. His dialogue is as recognizable as Hemingway’s (and as easily mocked), and in an industry where writers are treated as interchangeable technicians, he has become a household name.

Being recognizable and being excellent aren’t the same thing, of course, and there are plenty of people whose opinions I respect who find Sorkin banter merely smug. I’m not even sure I disagree with them. I fell in love with “The Social Network” at the smug age of 17, and I’ve never really fallen out. It’s a deeply smug movie, but it owns up to smugness. It has interesting things to say about smugness; it knows the momentary delights of being right, but also the sour aftertaste.

When I think about Sorkin — a major influence on my love of movies whether I like it or not, and often I don’t — I feel tugged in many directions. I feel like I’m wrestling with a father-figure. In other words, I feel like a Sorkin character.

With time, recognizable stylists tend to inch toward self-parody. This was certainly true of Hemingway, and with Sorkin it’s almost a rule: each new Sorkin must be more Sorkin-y than the last. His breakthrough script, “A Few Good Men,” based on his own off-Broadway play and adapted into a film in 1992, is relatively subdued. There are Sorkin-y moments, but only moments — nothing like the two unbroken Sorkin-y hours of “The Trial of the Chicago 7,” which Sorkin wrote and directed, and which contains so many zingers that at one point a character actually says, “Zing!” A sample:

JERRY: Nobody’s ever sent me a drink before.

JERRY: It’s a Tom Collins. I know it’s kind of a country club drink but they’re delicious. A man in England named Tom Collins claimed in 1894 to have invented it, but then another man who’s name I’ve forgotten said, no, he’d invented it two years earlier and I think there was a lawsuit.

DAPHNE: That’s a surprising amount of controversy for gin and lemonade.

DAPHNE: Hey Jerry, do you know why the French only eat one egg for breakfast?

DAPHNE: Because in France, one egg is “un oeuf.” (pause) It’s un oeuf.

JERRY: I feel so much better about my Tom Collins story.

I love the showy symmetry in the way the characters introduce themselves. I love how much repetition Sorkin squeezes into 30 seconds of dialogue — “Tom Collins,” “Tom Collins,” followed by the recipe for the drink, so that the third and final “Tom Collins” comes as a little surprise. I love the unapologetic implausibility of all those dates and trivia — in fact, I love the swaggering implausibility of the writing in general, especially since it’s smack-dab in the middle of a movie that’s supposed to be based on a true story.

Everybody in an Aaron Sorkin movie, from the lawyers to the secretaries to the bartenders to the children, sounds like Jerry and Daphne. But then, everybody sounds the same in a Don DeLillo novel, too. This isn’t as much of a non sequitur as it sounds. Sorkin screenplays tend to get compared to golden-age Hollywood talkies, but they remind me more of the “hysterical realist” novels — DeLillo’s “Underworld” (1997), Zadie Smith’s “White Teeth” (2000), Thomas Pynchon’s “Mason and Dixon” (1997), etc. — whose popularity coincided with the run of “The West Wing” on NBC. In both, there’s a manic pace, a fine line between exhilarating and exhausting, and a sense that information is its own character — maybe the only worthwhile character.

Sorkin’s screenplays are as simple-minded about human nature as they are knowing about everything else. This isn’t a fatal flaw as far as I’m concerned — I could probably count the number of non-thin characters in, say, Alfred Hitchcock movies on the fingers of one hand. The difference is that Sorkin thinks he has urgent things to say about human nature. Like Hitchcock, he’s something of a Freudian, maybe the last true Freudian in Hollywood. This means that if you’re a protagonist in one of his movies, you have one (1) unhealable wound that explains everything about you.

One of the few Sorkin leads with no discernible Oedipus complex is Mark Zuckerberg. Mark Zuckerberg is also, not coincidentally, one of the only Sorkin leads who’s also an interesting character. This has a lot to do with Jesse Eisenberg’s acting and David Fincher’s directing, but credit where credit is due: “The Social Network” is the rare Sorkin script that doesn’t explain its protagonist to death (rewatching the film for the first time in years, I noticed that Mark is one of the only characters who never talks about his family).

The film begins and ends with Mark brooding over his ex, Erica, the idea perhaps being that he founded Facebook to win her back. But in between, we’re allowed to stray pretty far from this facile explanation: we see Mark writing code for its own sake, flirting with his new glamorous lifestyle, and, most often, smirking because he knows he’s the smartest guy in the room. Erica is his Rosebud, but only in the sense that a crappy old sled was Charles Foster Kane’s: she explains everything but nothing.

“The Social Network” taught Sorkin the wrong lessons. It’s a zeitgeisty movie, bursting with important subject matter, but it’s also laugh-out-loud funny, and its funniest scenes (Larry Summers politely telling the Winklevoss twins to piss off, Sean Parker folding under pressure when the cops come) have nothing to do with the zeitgeist.

Since then, however, Sorkin has doubled down on true stories and relevant themes, and he may very well parlay them into another Oscar. At this point, he’s probably pretty set in his ways, but I wish he’d make a noir, or a stoner flick, or maybe a sex comedy. Something where the script is under no obligation to be important and can just be good.