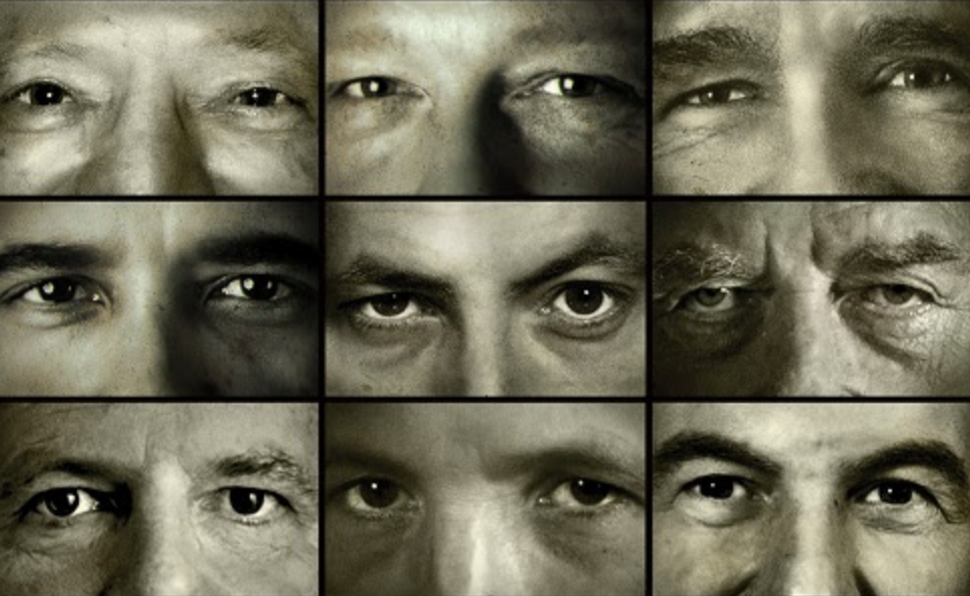 A collection of eyes. By The Human Touch

Yasser Arafat once insisted on cutting up Dennis Ross’s chicken during a dinner; Ross was then head of the American effort to arbitrate peace between Israel and Palestine. At the time, it seemed like a sign of hospitality and hope — Ross joked that Arafat had “a Jewish mother syndrome.”

These days, after the Human Rights Watch has declared Israel guilty of the “crime of apartheid” against Palestinians, it is hard to imagine a moment of such intimacy. But “The Human Factor,” a new documentary by Israeli filmmaker Dror Moreh, is full of such moments, covering the near success and subsequent disintegration of the peace process.

The film, which will be released to general audiences on May 7, covers history through the eyes of the American team. It splits its time between interviews with the major players in the peace process, including head negotiator Dennis Ross, and behind-the-scenes photos from White House photographers.

The photos capture backstage moments of Arafat clapping Rabin on the back — the sort of affection that was choreographed out of the famous handshake photo-op at the signing of the Oslo Accords — or Clinton with his head in his hands. The Americans, narrating, recall the tiniest of moments of burgeoning warmth in the mediation process, such as when one negotiator walked into Arafat’s office and found the Palestinian team all watching “Golden Girls,” a show which he called “effectively Jewish.”

This humanity is what Moreh wanted to highlight. “We tend to think that in these places, in these corridors of power, they are people who are above human emotions or human feelings. They are very smart and they are concentrated on the issues at hand,” Moreh told me. “But I learned that it’s not like that. Their personal relationship, the connection between the leaders, are really really important — the trust that you build with the other side.”

Yet the real takeaway of the film is how that same humanity also destroyed the peace process.

The first half of the documentary traces the relationship between Rabin and Arafat as it grows from suspicion — that carefully choreographed Oslo Accords handshake — to trust. But after Rabin is assassinated, the tone changes; the film’s second half covers the prime ministers who came after him, Benyamin Netanyahu and Ehud Barak, and precisely how the human relationships were mismatched and mismanaged. The interviewees lay out exactly how Rabin’s successors disrespected Arafat, causing him to walk away from Barak’s offer at Camp David, and the film presents a clear timeline of the peace process’s disintegration, ending on a depressing note as Gamal Helal concludes that the two-state solution is impossible today.

Moreh doesn’t see all the responsibility for failure landing on Barak and Netanyahu, however. “My problem is when Americans, presidents and negotiators, are dealing with someone like Netanyahu who doesn’t want [peace], or who plays the game. Why do they play along with him?” he said. “I think America has a lot of levers over Israel, and they never use them. They could do a lot more.”

“The Human Factor” of course has its biases, but it is remarkably frank about its shortcomings. The members of the American team are able to discuss the Israelis using insightful specifics, while only guessing at Arafat’s motivations and experience; the team was all Jewish but one, Gamal Helal. When the director asks them how this could not bias them in the peace process, Aaron David Miller, one of the top negotiators at Camp David, agrees it likely has. “You grow up in a milieu, an environment, in which you’re much more familiar with the needs and requirements of one side, but not the other,” he says. Too often, he adds, the American team acted as “Israel’s lawyer,” talking to Israel first, and presenting those requests to Arafat.

Moreh was equally open about his own biases. As an Israeli, the film is about major events that influenced his life and upbringing. But he is close with his interviewees, and he wanted to be loyal to them, not betraying their trust and keeping his own thoughts out of things. Still, some biases are subconscious. “It’s a tricky question,” he admitted. “When are you choosing a statement that reflects my point of view about the conflict?”

Of course, Middle East peace is a huge topic, too big for any one documentary, and there is some assumption that viewers are familiar with the history of the region and the characters. It can be hard to understand who each interviewee is or what role they play — they’re only introduced by name — and there’s little historical context given. The film picks up during discussions with Syria about the Golan Heights in 1991, with no mention of the wars that led to its acquisition, nor is the PLO’s founding and history explained. But “The Human Factor” does offer a perspective that so often gets left out of discussions of the region — humanity, contained in the myriad small details the interviewees offer about each major player, such as Clinton’s distraction during the Lewinsky scandal or Ross crying in front of his children when he learned of Rabin’s assassination.

The film stops after Camp David; it doesn’t cover the building of the partition wall or the violence of the recent years. But it gives crucial context to understanding our current situation. Unfortunately, however, having a better understanding of the ongoing reality doesn’t mean we’re any closer to resolving it — Moreh doesn’t see any leaders who could rise to the level needed to reach a solution. “Maybe in 40 years,” he said.