Why Jews are key to Chinatown’s survival 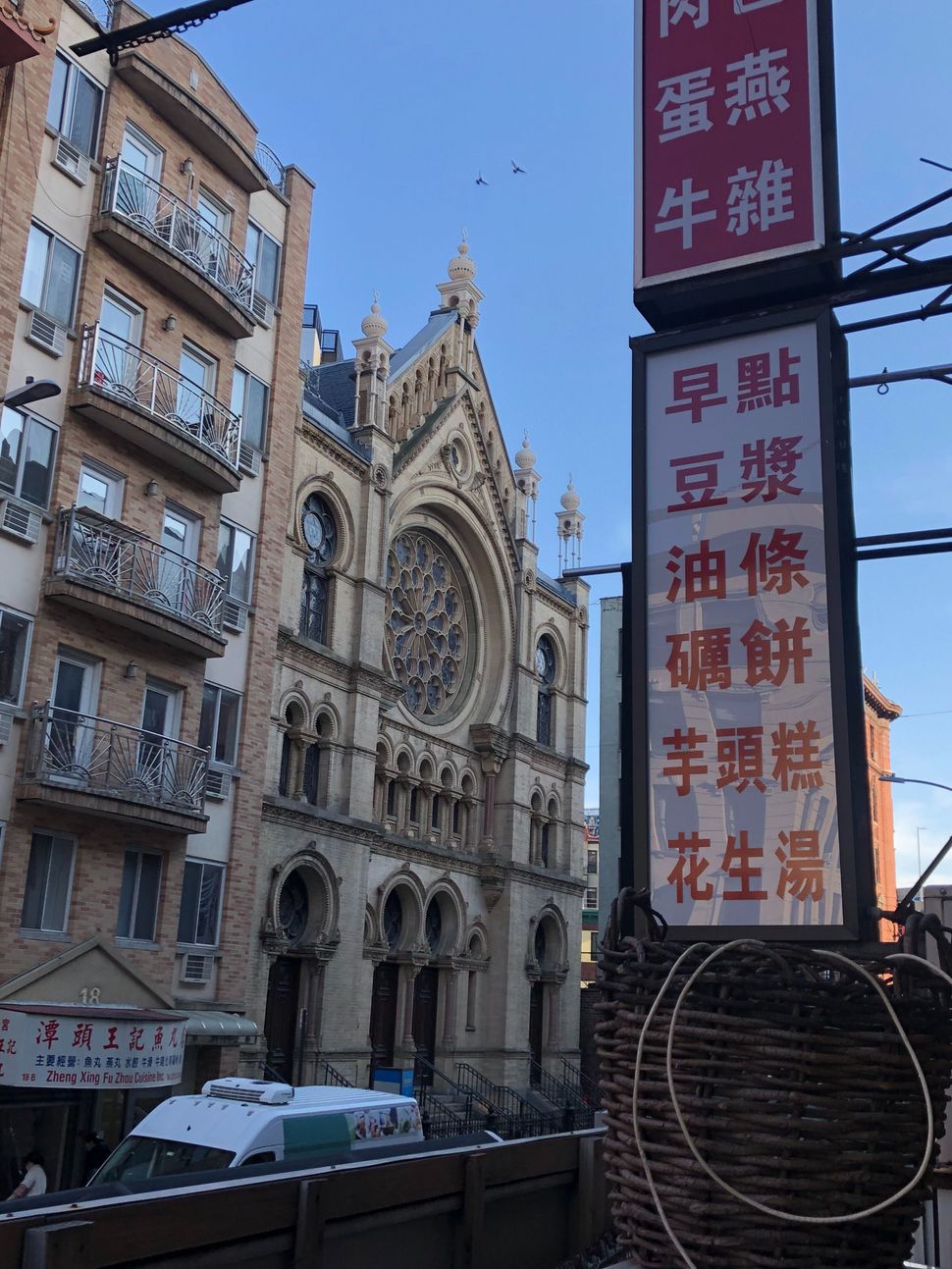 My last indoor dining experience of 2020 was in early March. I had crispy roast duck, watercress and assorted dumplings at Wu’s Wonton King, at the junction of Chinatown and the historic Jewish Lower East Side. Located at the foot of the Forward Building, Wu’s occupies the site of the old Garden Cafeteria, what used to be the center of New York Jewish intellectual life. Where tanks of jostling Alaskan king crabs are found today, Forward writers and Yiddish literati once kibitzed over kreplach and kugel.

Then Americans, who otherwise ignored the virus, stopped going to Asian restaurants. By early February 2020, restaurants in Chinatown Manhattan reported a 30 percent drop in business. The simultaneous spike in anti-Asian violence left no doubt that Chinatown was a victim of discrimination. In what would become a year of fierce protest across the political spectrum, I heeded the call to the most bourgeois activism possible: taking a stand by chowing on pork and chive dumplings.

That night at Wu’s, at one table, a large Chinese family devoured a gleaming suckling pig. At another table, a bachelorette party dressed in matching pink t-shirts took advantage of the restaurant’s BYOB policy, generously pouring from bottles of tequila and vodka. I’m sure every table was discussing COVID, but with only a handful of confirmed cases in the U.S., the virus was still a foreign specter. However, by the end of the evening, President Trump announced the European travel ban, and the NBA canceled its season. The threat of the coronavirus sunk in.

‘It’s Much Worse Than We Expected’ 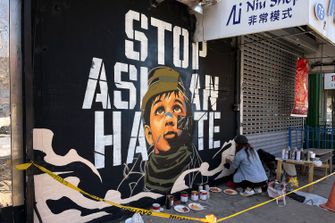 A Rise in Hate: Chinatown has faced a ‘double whammy’ of coronavirus and rising bigotry. By Getty Images

Over a year later, the typically crowded Chinatown streets still feel empty. Even though millions of New Yorkers have been vaccinated, Chen estimates that neighborhood business is still below 50 percent. “And a lot of restaurants that appear to be open owe back rent or back taxes,” he says, fearing that for some, the worst may be yet to come. Part of the problem is that most of Lower Manhattan’s 300,000 office workers haven’t returned to work. Still, the greater challenge is the lasting racist stigma of COVID.

“We suffered a double whammy,” said Chen referring to the coronavirus and the virus of racism, “We are now dealing with the second virus, which is much more difficult to eradicate.”

Nominally, Chen’s work focuses on economic development. However, his last initiative with the Chinatown Business Improvement District, “Warm Hearts NYC,” asked New Yorkers to send words of encouragement to post around the neighborhood. It offered moral support, not an economic strategy. For Chen, the two are linked.

“The restaurants are closing at 8 or 9 p.m.,” he says, explaining that racist attacks have left employees afraid to travel home late at night. Most recently, on the evening of May 2nd, an Asian woman was attacked with a hammer near Times Square.

Chinese-Americans have been particularly vulnerable during the pandemic. A recent study by the American Journal of Public Health linked President Trump’s “Chinese Virus” tweet with an increase in anti-Asian sentiments. In addition, Asian-Americans and Pacific Islanders are more likely to be frontline workers. Many Chinese-Americans are health care workers, but many more work in restaurants, an industry devastated by the virus.

“It’s much worse than we expected,” Chen says. At a moment when a Chinese woman won the Oscar for best director and polls predict that New York will elect its first Chinese-American mayor, anti-Asian hate crimes are rising. American Jews can relate to this confounding mixture of acceptance and victimization.

Before the pandemic, there were over 37,000 Chinese restaurants across the country. On the surface, that number may appear to reflect America’s appetite for General Tso’s chicken. However, according to Heather Lee, a researcher at MIT, it’s the result of century-old discrimination that excluded Chinese immigrants from other opportunities. To survive, early 20th century Chinese-Americans opened restaurants and learned to market their food and culture to outsiders.

Even today, in Manhattan’s Chinatown, the rents of first-floor restaurants and gift shops subsidize upstairs rent-stabilized tenements, says Chen. The sales of souvenirs and soup dumplings don’t just mean service jobs; they are the economic foundation that keeps this 140-year-old community standing. 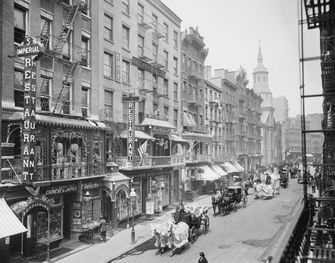 Chinatown, My Chinatown: Even back in the early 1900’s, Jews found a welcoming neighborhood centered around Mott Street. By Getty Images

From the start, Jewish Americans played a part in this delicate economy. According to the economist Susan Carter, in her chapter in “Economic Evolution and Revolution in Historical Time,” during the 1910s, the number of Chinese restaurants in New York City more than quadrupled. During that period, over half a million Jewish immigrants lived cheek to jowl on the Lower East Side next to Chinatown. Jews who fled persecution in Europe now had welcoming neighbors who were not indoctrinated in the antisemitism prevalent in Christian countries.

“They knew they could be safe if they went to Chinatown. They knew they wouldn’t be attacked,” says Donald Siegel, author of the kosher Chinese cookbook, “From Lokshen to Lo Mein.” Eating at Chinese restaurants became a way for Jewish immigrants to assimilate into the melting pot of New York.

Chinese kosher restaurants wouldn’t become a thing for decades, but Siegel says Jews felt they could get away with eating at chop suey joints. “Chinese cooks seldom use milk products; so Jews eating in Chinatown knew there would be little chance that rabbinic prohibitions against mixing dairy and meat would be broken.” And all that pork and shrimp? “Safe treyf,” explains Siegel. “I grew up in an orthodox community,” he says, recalling his childhood in Saratoga, New York, in the 1950s. “I’d ask my father about these little gray bits in the egg roll, and he said, ‘don’t ask. If you don’t know what it is, it’s OK to eat it.’”

“Safe treyf” has no standing amongst the rabbinate, but the practice became so common amongst kosher households, it even appears in Philip Roth’s “Portnoy’s Complaint.” Going out for Chinese food, especially on Christmas, remains a part of American Jewish culture. “You’re our best customers!” jokes Chen.

‘The Enduring Allure of Safe Treyf’ 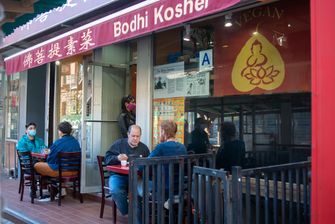 Al Fresco Dining: Chinatown restaurants, some of them kosher, have come to rely on Jewish customers. By Getty Images

Jews are eating Chinese food during the pandemic, according to Adam Prozda, an employee of West Side Wok, a kosher takeout restaurant on Manhattan’s Upper West Side.

“We saw an uptick in business during the lockdown,” said Prozda. While New York Jews may have survived quarantine ordering in wonton soup, they haven’t been venturing down to Chinatown like before. Bodhi Kosher Vegetarian, a Cantonese style restaurant on Mulberry Street, closed for two months in 2020. After reopening last spring, business did not return.

“Nobody came. It’s so quiet in Chinatown,” said owner Kent Zhang. In addition to worrying about keeping the doors open, Zhang is concerned about the safety of his employees. The evening after six Asian women were murdered in Georgia in March, a deranged man entered the restaurant and yelled anti-Asian epithets. “A crazy guy,” Zhang said in disbelief.

The restaurant has scraped by with the business of loyal regulars. “Jewish customers really support me,” Zhang said. In addition to religious Jews, the vegetarian restaurant has a following of Chinese Buddhists, Hindus and others who Zhang calls “no religion Hippies.” It’s only recently with the mass vaccinations that Zhang has begun to feel optimistic. “When the customers feel safer, we get more customers. Baruch Hashem,” the Beijing-born restaurateur remarked.

More than a customer, The Museum at Eldridge Street housed in the landmark Eldridge Street Synagogue is an ally. “We’re all part of the same community,” says Chelsea Dowell, the museum’s Director of Public Engagement. When the synagogue opened in 1887, Eldridge Street was full of storefronts with signs in Yiddish. Now they’re in Chinese characters. Museum docents have long drawn parallels between the past Jewish and current Chinese immigrants who made the area their own. Now, the museum feels they must do more.

“We’ve prioritized bystander training for all staff members,” says Dowell. “We want to ensure we can help anyone in need.” For its annual “Egg Rolls, Egg Creams & Empanadas Festival,” this year to be held online, the museum will partner with Welcome to Chinatown, an organization that supports the local Chinese community. “We want to encourage people to get out in the neighborhood, support these businesses and visibly show Chinatown that we’re behind them.”

The museum will soon announce its reopening. When guests return to the 130-year-old Orthodox synagogue, they will get a firsthand look at how the immigrant congregants forged their faith and newfound freedoms to create a Jewish American identity. Hopefully, guests will then stick around the neighborhood for a bite. “Safe treyf” or no-treyf, it’s part of the Jewish American tradition and more important now than ever.

Why Jews are key to Chinatown’s survival