How Jewish New York got its very un-Jewish names 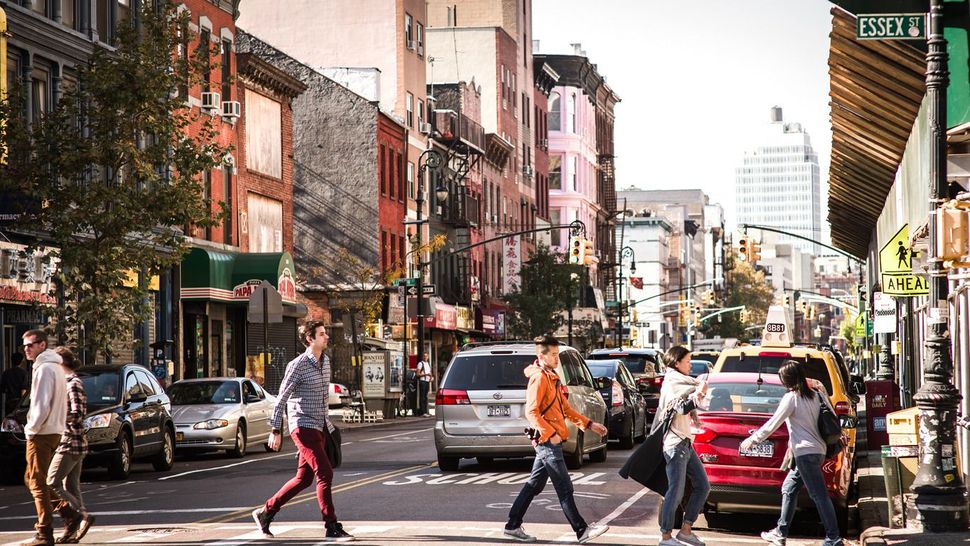 Joshua Jelly-Schapiro asked me to meet him on Frieda Zames Way, which is not an easy place to find on Google Maps.

No street view photos, no subway wait times — nothing to feed our iPhone-era inclination to know exactly where we’re going, all the time. As any serious investigative journalist would, I immediately turned to the internet, where a website called Oldstreets.com informed me that Frieda Zames Way is just an honorary name for the very workaday stretch of East 4th Street that lies between First Avenue and Avenue A.

When I finally made my way there on a blustering, unseasonably chilly afternoon, Jelly-Schapiro told me that the corner named for Zames is responsible for our most accessible catalog of New York City’s honorary street names. When a neighborhood resident wanted to know who exactly Zames was (a pioneering disability rights activist, in case you were wondering), she called the borough’s historian, who then commissioned retired urban planner Gilbert Tauber to compile a list of the 1800 or so honorifics adorning street corners across the city — the very list I’d stumbled across on Oldstreets.com. 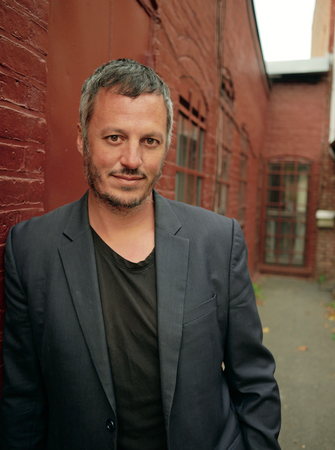 Jelly-Schapiro, 41, knows a lot about honorary street names and Oldstreets.com because he just published “Names of New York,” a lively treatise on the city’s place names that’s part reference guide, part city history and part travelogue. On the Internet, there’s a lot more information about him than there is about Frieda Zames Way. I’d already learned that he’s a trained geographer who’s made a career writing about place: Before turning to the city’s place names, he wrote a travel history of the Caribbean and collaborated with Rebecca Solnit on the quirky New York atlas “Nonstop Metropolis,”. I knew he was a native of Vermont, although I probably could have guessed that — he arrived for our walkabout wearing a puffer jacket under a blazer, displaying the unique Vermonter ability to integrate insulated outerwear into any ensemble.

As we walked down 4th Street, past a crowd of schoolkids just released for the afternoon, he told me it was his own childhood, much of which he spent splayed out with an atlas on the living room floor, that propelled him to become an authority on the many ways New Yorkers have charted their city over time.

“There are two kinds of books,” he said. “The kind that have maps in them, and the kind that don’t.”

We’d met up to amble through the Lower East Side, a neighborhood that once housed the world’s largest concentration of Jews and, decades after those inhabitants dispersed, still carries enormous historical weight as a Jewish enclave. The neighborhood’s history forms only a small part of Jelly-Schapiro’s sprawling city narrative, but it’s also an excellent case study of his broader argument: That while we tend to think of names as defining the places they describe, it’s often places that define their names.

“It’s a banal phrase, just a descriptive phrase for this part of Manhattan,” Jelly-Schapiro said of the Lower East Side. “But across time it gained this name as a preeminent destination for immigrants.”

Kehila Kedosha Janina, sometimes known as the Romaniote Synagogue, was founded in 1926 and is still in operation. Image by The Forward

Many of the neighborhood’s great byways have pre-Revolutionary War names, and while we walked in no particular direction Jelly-Schapiro spilled the tea (terrible pun mine, and very much intended) on their history. In the days when the city proper was just a cluster of dwellings at the bottom of Manhattan, wealthy English and Dutch clans cultivated crops here, and they liked to stamp their presence on the land they occupied. Elizabeth and Hester were two daughters of the Bayard family before they gave their names to intersecting avenues. The De Lanceys named a street for themselves as well as coining Essex and Grand, which marked the boundary of their estate. Staunchly loyal to the British monarchy, they were run out of town after the Revolutionary War. James Rivington, who gave his name to a street nearby, published the city’s leading loyalist broadsheet during the war; but after revealing he’d been a double agent the whole time, he got to stay.

But when you hear the names Grand and Delancey, Hester and Elizabeth, do those Dutch and English settlers come to mind? Probably not. Do you recall the neighborhood’s mid-19th century tenure as “Klein Deutschland,” a haven for German immigrants? Unlikely. If you’re a Forward reader, you might associate Hester Street with Ab Cahan’s novel, “Yekl,” or Anzia Yezierska’s coming-of-age story, “The Bread Giver.” Delancey might remind you of “Crossing Delancey,” a 1988 Joan Micklin Silver rom-com that tackled Jewish assimilation and testified to the ascent of Yiddishkeit in pop culture. 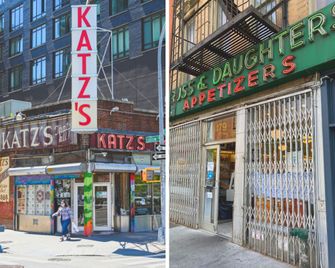 If there’s anything you’ll learn from reading “Names of New York,” though, it’s that those resonances won’t last forever. Many of the stops on our walk, once neighborhood mainstays, are now landmarks to a community that has largely moved on. Despite their stuffy monumental plaques, the Romaniote and Bialystock synagogues host Shabbat services. But nearby Katz’s Deli and Russ & Daughters cater to out-of-town crowds as much as locals.

We spent a while looking for a painted advertisement for the now-defunct Schapiro’s Kosher Winery, a piece of street art Jelly-Schapiro holds dear because it shares the unusual spelling of his surname. The ad proved elusive (later, aided by Google, Jelly-Schapiro emailed to tell me that it’s at the corner of Essex and Rivington), but there was no shortage of murals dedicated to “Loisaida.” That’s the phoneticized Spanish spelling of the neighborhood (as well as an honorific to Avenue C), and it’s a testament to the strong Puerto Rican presence here, which grew during the decades that Jews moved out. Modern and multicolored, the murals seemed to foreshadow a time the Lower East Side’s Jewish story will feel as distant as the Dutch one. 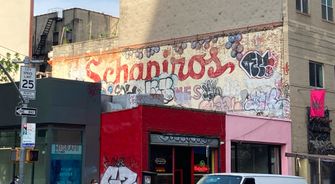 Nowhere is the tension between the neighborhood’s reputation as an immigrant hub and its actual character more apparent than at the old Essex Street Market. Founded by then-Mayor Fiorello La Guardia during the Great Depression, the market gave pushcart vendors an indoor haven that, by today’s standards, looks both atmospheric and extremely dingy. Now the market has gotten a reboot in the form of Essex Market, a sleek food hall hawking New York street eats in every imaginable incarnation. The new Essex Market remains city-owned, and still houses the vendors from the previous premises. But Jelly-Schapiro pointed at the building’s glassy exterior, where the names of some of the city’s oldest ethnic eateries — Veselka, the 24-hour Ukrainian eatery, and Schaller & Weber, an old-school German market — appeared in trendy block font. Those legacy restaurants have established new branches at The Market Line, a privately-owned food hall housed in the same building. Their names have never been more literally visible; but their absorption into a hipster mecca is ironic proof that they no longer serve the immigrant populations they once symbolized. What used to be an actual Eastern European enclave, Jelly-Schapiro observed, was now “a consumable version of ethnic New York.”

The old Essex Street Market, which is getting a sleek new upgrade across the street. Image by The Forward

We’d been chatting about the ways in which names gain new meanings organically over time. But “Names of New York” hits shelves at a moment when many cities and institutions are deliberately changing names that commemorate dishonorable people or moments in our national history. As we walked toward the NYU campus, where Jelly-Schapiro is a member of the Institute for Public Knowledge faculty, I confessed I often found his book grim reading: The best and most haunting chapter investigates Native American place names, from Gowanus and Canarsie to Manhattan itself, and is rife with anecdotes of colonists who casually bowdlerized the language of the people they were driving off the land. By his own telling, even the most nostalgic names of the Lower East Side can be read as settlers’ desire to stamp their dominance on conquered territory. Had studying this history given him any insight into the name-change discourse?

Nothing “prescriptive,” Jelly-Schapiro said. He pointed out that changing a street name can be much more fraught than, say, removing a monument. For every street with a troubling namesake, there may be hundreds of people who grew up or grew old there, and don’t wish to see their own memories erased. He’d seen one ingenious and very Jewish solution but it required us to travel (metaphorically, at least) to the outer reaches of Brooklyn.

Near Manhattan Beach, there’s a street named Corbin Place, after the 19th-century real estate developer Austin Corbin. It so happens that Corbin was a raging antisemite — a prominent member, in fact, of something called the Society for the Repression of Jews. In 2007, residents of the now heavily Jewish neighborhood hit on an unexpected way to address Corbin’s legacy: they added the initial “M,” renaming the street for Margaret Corbin, one of the few female soldiers in the Revolutionary war.

“It was a way to keep the name but change who it celebrates,” Jelly-Schapiro said. If you read the rest of his book, you’ll conclude it’s a very New York solution.

How Jewish New York got its very un-Jewish names