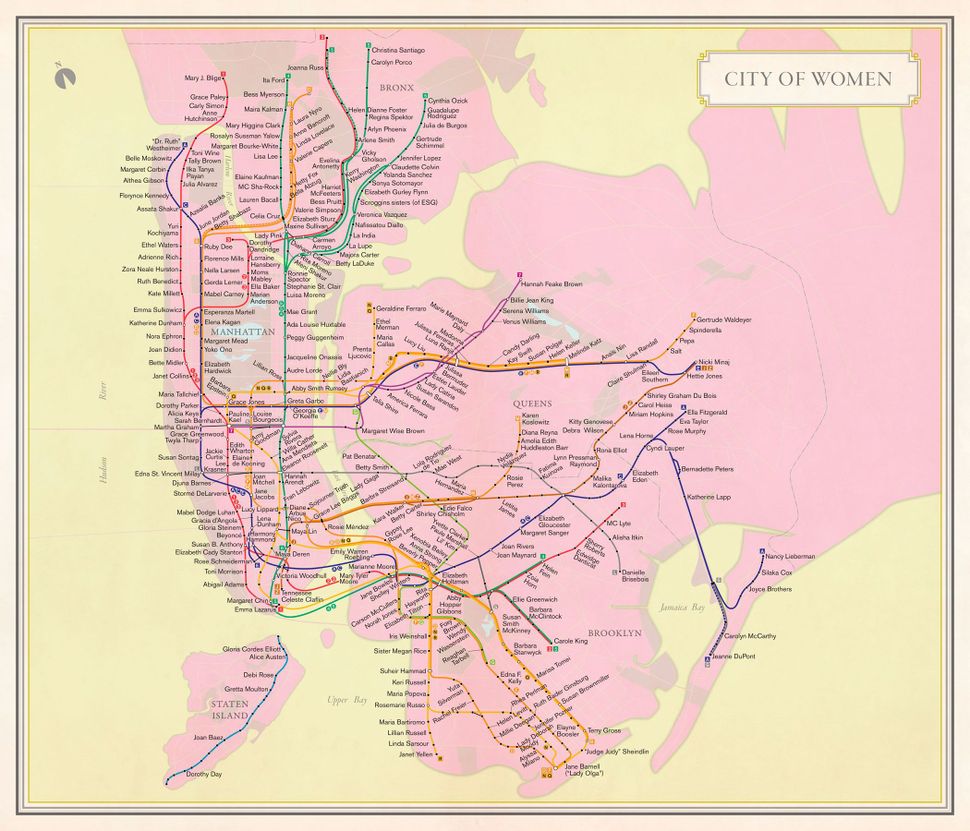 New York is a man’s city, or at least seems like that from the names of so many places of note — Columbus Avenue, Rockefeller Center, Bryant Park, the Ed Koch Bridge. As the writer Rebecca Solnit points out, the city itself was named for a male: the Duke of York, later known as King James II, after the British seized the land it sits on from the Dutch.

But Solnit is doing something about it, publishing in the most recent edition of The New Yorker an alternative subway map, with a pink background (a bit gender-normative, no?) and rechristened stops, to commemorate “The City of Women.” Needless to say, there are tons of Jewish women who made the honor roll.

Start at the tip of Manhattan, in Washington Heights, and work down the A and C Line. Pass the famous sex-talker Ruth Westheimer at the top, and head to the Upper West Side, and get off at the Elena Kagan stop. If you continue further, to downtown and Brooklyn, you will pull into stations named for Susan Sontag and Joan Rivers, among others.

Or hop on the B Train, from the Bronx to Sheepshead Bay in Brooklyn, meeting the breakthrough feminist politicians Bella Abzug and Elizabeth Holtzman, followed later by public radio siren Terri Gross, and then finally in Brighton Beach the honorable Judge Judy. Feeling more cerebral? Get off the 5 or 6 near the New School in the Village, at a stop named for the philosopher Hannah Arendt, who used to teach there. Need to feel inspired? Ride the G Train past a station honoring Barbra Streisand.

Solnit, born to a Jewish father and Irish mother, has developed a formidable reputation in feminist circles for her writing and activism. As an example, she invented the now well known concept of “mansplaining,” in which men explain an idea to women in a high handed, sexist manner, insulting their intelligence. She wrote an earlier book inspired by that coinage titled “Men Explain Things To Me.”

In Solnit’s city, no matter your interests or inclinations, there’s a station named for a Jewish woman after your own heart. Check out the full map here, and get ready for the release of the book it comes in, “Nonstop Metropolis: A New York City Atlas,” by Solnit and Joshua Jelly-Schapiro, coming out Wednesday, at a subway stop near you.