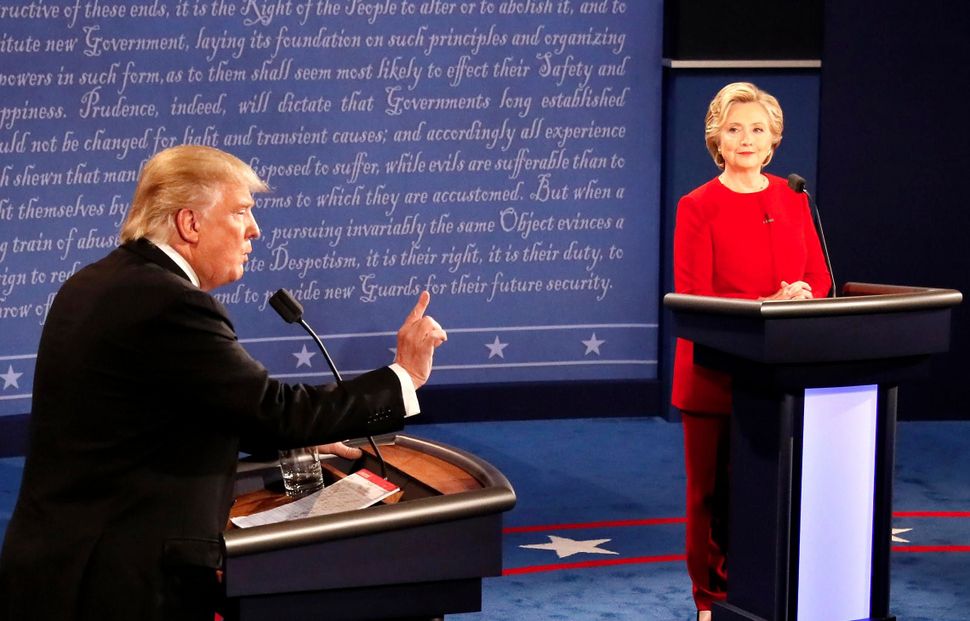 Every woman who has ever been mansplained, condescended to or bullied by a louder, bigger, blustery man in a professional context was cringing last night, as Donald Trump, in the first presidential debate, interrupted Hillary Clinton 51 times. 25 of those times were in the first 26 minutes of the debate. (And then defended his bluster as evidence of a winning temperament.) And how many times did Clinton interrupt? Zero. Want to guess how many female rabbis, doctors, lawyers, and other professionals have had similar experiences? Enough that even if those women weren’t Hillary supporters to begin with they could relate to the steamrolling, and Holt’s bizarre and frustrating silence.

All of this might have been slightly less deplorable if Trump’s interruptions had been substantive, but they weren’t. He was ill-prepared, lacking facts (he barely registered Holt’s early question about race, and took long minutes to respond when pressed about his company’s racist housing policies in the 1970s). Some of his other statements were just plain false: He insisted that he had opposed the Iraq war, when his Twitter feed still insists otherwise, for example

At other times, he was all over the map: blaming Hillary Clinton for mistakes made by and failures of Obama, Bill Clinton and even Rahm Emanuel. It was so ludicrous that, at one point, Clinton said: “I have a feeling that by the end of this evening, I’m going to be blamed for everything [negative] that’s ever happened.” Trump’s response? “Why not?” was not a cogent argument, but the snarky, cavalier taunt of a playground bully.

Clinton had her own missteps, when, in response to a question about race, she spoke about crime, making a race-crime connection that was never part of the question, and showing her own blind spots. But, overall, she was composed, well-prepared, coherent and dignified, even when condescended to and childishly provoked. Her composure allowed Trump to hang himself with his own rope, especially at the end of the debate, when he devolved into a critique of clinton’s “look and stamina” – a barely disguised sexist rant.

For better or worse, the presence of more women politicians and public intellectuals on television has meant that condescension, mansplaining and casual sexism are becoming more visible in our everyday lives, moved from board rooms where women were once a token presence into our living rooms and onto our television screens. (For more on this, see any taping of Morning Joe.) This has the dual effect of making us more aware of sexist bullying when it occurs, while also creating regrettable, cringe-worthy standard of discourse that is, at best, provocative, juvenile and misogynist.

Last night, Trump’s mansplaining may have, in part, lost him the debate. But too often, men benefit from just such tactics in the boardroom, on talk shows, or in the academy. Let’s hope that, after last night, that changes, just a little bit.