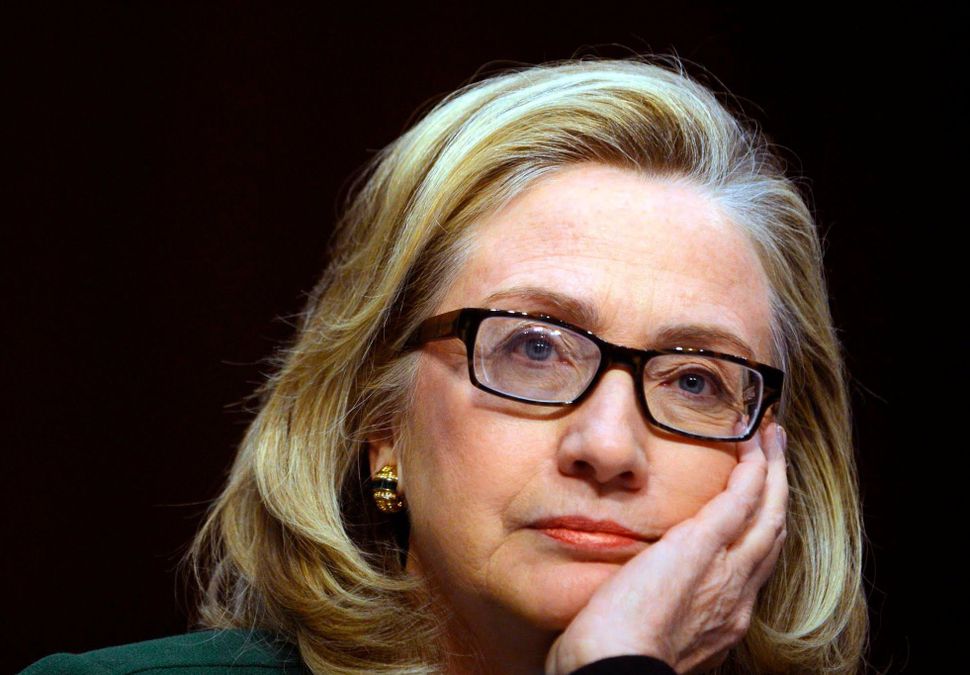 What is the presidential Look? More importantly, does Hillary Clinton have it?

Earlier this month, Donald Trump said she didn’t. With the exception of diehard Trump fans, everyone else understood this to be code for Clinton’s having two X chromosomes. And of course, Trump was right. 44 presidents have looked nothing like this woman. In response to the comment, Alexandra Petri of the Washington Post wrote a helpful primer for HRC called “How Hillary Clinton Can Get That Presidential Look”. The piece included tips for how Clinton might emulate each previous president, including imitating John Adams Princess Leia hairstyle and wearing George H. W. Bush’s oversized “Tootsie glasses.”

At last night’s debate at Hofstra University on Long Island, moderator Lester Holt asked Donald Trump to clarify the “look” comment. Trump skipped over the focus on appearance – which is sure to alienate women – and went right into another pet Trump topic.

That’s three staminas in under ten seconds, in case you’re counting, but Clinton’s response is one that will be remembered.

“Well, as soon as he travels to 112 countries and negotiates a peace deal,” she said, “a cease-fire, a release of dissidents, an opening of new opportunities in nations around the world or even spends 11 hours testifying in front of a congressional committee, he can talk to me about stamina.”

But let’s get back to looks, since the right one is so important.

In the same exchange, Clinton reminded the approximately hundred million debate viewers that Trump was “a man who has called women ‘pigs, slobs and dogs, someone who has said that pregnancy is an inconvenience to employers, someone who has said women don’t deserve equal pay as long as they do as good a job as men.”

Clinton went on to talk about how Trump had called Miss Universe winner Alicia Machado “Miss Piggy” and “Miss Housekeeping” because she was Latino.

The comment was damaging to Trump, but it got even worse for him during the post-debate spin. Earlier today on Fox and Friends, Trump seemed to defend himself for the “Miss Piggy” comment by pointing out that after the Miss Universe pageant (this was in 1996, when Trump was the executive producer of the pageant), Machado had “gained a massive amount of weight and it was a real problem.” Machado was then 19 years old. Trump also called her “an eating machine” on the Howard Stern show.

Machado once told Inside Edition that Trump’s comments shamed her and led to years of eating disorders and psychotherapy.

That is something that Donald Trump still doesn’t get. The focus on appearance is detrimental to women, whether it’s a 19-year-old beauty pageant contestant, or a 68-year-old Presidential candidate.

But women know it. We know that despite the enormous progress made by the feminist movement, women are still judged on their looks more than men are. And we know that the more we can shift the focus onto substantial qualities like ability, experience, dedication, temperament and yes, stamina, the better off we’ll be.

There’s a famous photograph taken of Hillary Clinton at the 11-hour congressional hearings during which Republicans grilled the former Secretary of State about her response to the 2012 Benghazi attacks. No new information emerged from the 2015 hearings, and the episode was largely seen as a Republican effort to discredit her. But Clinton sat through it calmly, and the photo of her – in which she rests her chin on her hand looking calm and bored and aware of all the time that’s being wasted – is often used in Clinton’s memes to illustrate her unflappable cool in the face of bullshit. It’s no wonder she brought up the hearings to Trump last night when the subject of stamina came up.

Devorah Blachor is writing “Let it Go: The Feminist’s Guide to Raising a Little Princess,” forthcoming from Tarcher/Penguin. She writes about feminism and parenting for the New York Times, Huffington Post, The Establishment and others, and writes humor for McSweeney’s Internet Tendency. Follow her on Twitter @DevorahBlachor, or on Facebook.