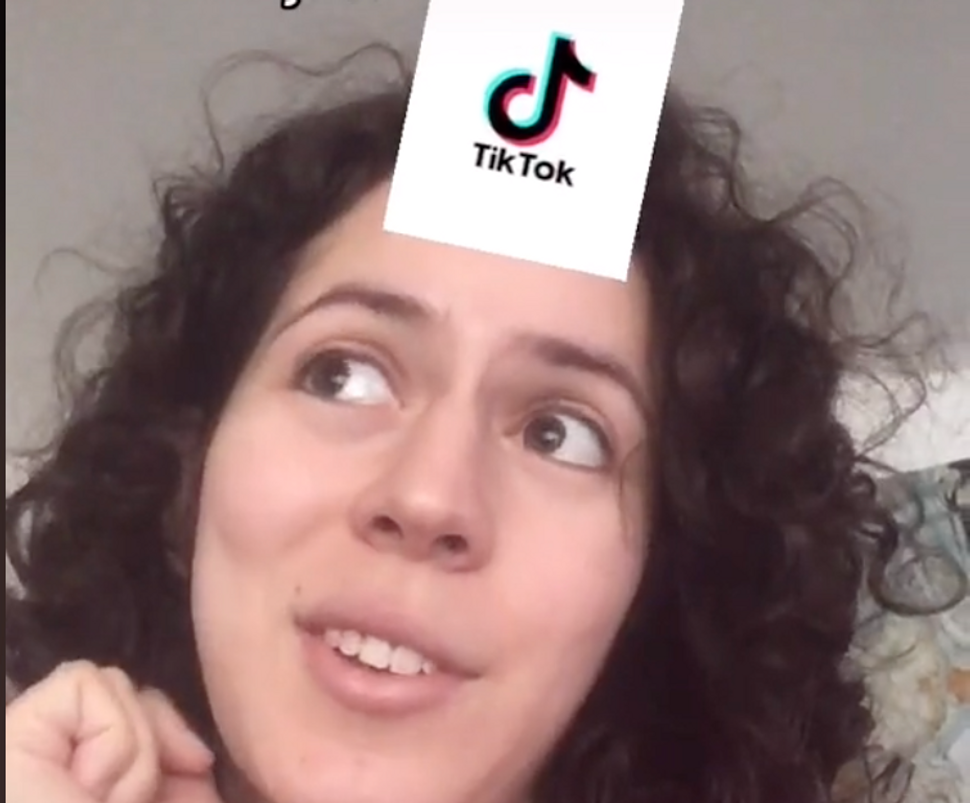 Editor’s note: This story was updated on Tuesday, May 11 to include a statement from a TikTok spokesperson.

Going viral overnight is the dream for most aspiring social media influencers. But for Jewish creators on TikTok, it can be a nightmare filled with antisemitism.

For May, which is Jewish Heritage Month, TikTok created a #MyJewishHeritage hashtag and featured it on its Discover page, placing several Jewish creators’ videos at the top — even though they had not used the hashtag on their videos. These creators woke up to floods of antisemitic comments on old videos.

Two of the top three videos on the page had been made for Passover before the hashtag existed, and were bumped to the top of the feed by TikTok without warning or permission, and exposed to a wider — and often antisemitic — audience.

“Normally I would be very excited to be featured at the top of a trending hashtag. I am proud of the content I create and I put a lot of effort into it,” said Rachel SJ in an email; their video, a song about Passover, is currently one of the top three videos on the #MyJewishHeritage page, under their handle @sj_rachel. “But TikTok gave me no warning, which would have allowed me to change my privacy settings to limit comments and video duets/stitches.”

Instead, Rachel spent much of the day trying to delete comments. “I didn’t want to risk the wait times and lack of follow-through that I’ve already experienced from attempting to report antisemitism,” the creator told me.

Midday, the app glitched, and Rachel was unable to see new comments, even though they were still pouring in. The hate was posted not only on the video featured on #MyJewishHeritage, but also on videos across Rachel’s profile, which antisemitic users were now exploring thanks to the new publicity.

I approached TikTok for comment, asking how they selected the featured creators and whether they were aware of the antisemitic comments that had flooded in as a result of the hashtag. A TikTok spokesperson provided a statement saying that TikTok is “committed to maintaining a safe and welcoming community environment and and we work to identify and remove antisemitic content and accounts that engage in hateful behavior.”

Antisemitism is not new on TikTok. Some of it comes in the form of hateful comments, such as those about Palestine on apolitical videos about Jewish holidays and ritual, or outright declarations of hatred toward Jews. This type of comment, unfortunately, seems to be an unavoidable side effect of being online, and appears on most platforms. But other antisemitic trends are native to the app and integrated with its specific functions, such as a meme from last year in which users pretended to be ghosts of children killed in the Holocaust or a current trend riffing on the happy merchant symbol, both of which relied on TikTok’s filters, format and editing tools.

Jewish creators have struggled against this type of hate speech and antisemitism in the app, often duetting problematic videos to call out the antisemitism and urging their followers to report hate speech. But they say they have found little support from TikTok. In fact, they say the opposite has been true; many Jewish creators report that their videos calling out antisemitism have been taken down or put under review by TikTok for hate speech, while the videos they are criticizing, often of people openly declaring hatred for Jews, have remained up, or have been taken down only after several days of repeated reporting and flagging. Several Jewish creators I spoke with mentioned that it takes aggressive campaigns of reporting white supremacists, including usernames and profiles with obvious hate symbols in them, to get them taken down. 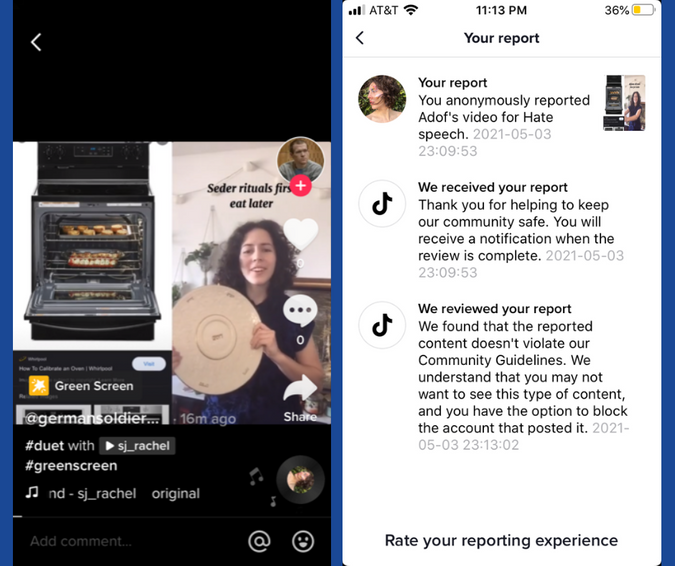 The oven video from @germansoldier, duetted opposite Rachel’s Passover video, and Rachel’s failed attempt to get it removed. Courtesy of Rachel SJ

A user named Ezra, who goes by @eightfrogsinatrenchcoat, recently responded to a video declaring hate for “jo0s.” (Users often purposefully misspell words to get around the app’s content filters.) Ezra said that a post criticizing the video’s antisemitism was taken down for hate speech within a few hours, but the original video didn’t disappear for two days; in TikTok time, two days is an eternity, during which the video may have reached hundreds or thousands of eyes.

Another video, from user @kitttenqueen, explaining the Holocaust, was instantly put under review and deleted, only eventually posting after the creator appealed the decision, according to a comment. The same pattern has been reported in numerous videos and comments from Jewish creators.

Meanwhile, an account called @germansoldier, with the user’s name listed as “Adof,” posted a video of an oven opposite one of Rachel’s videos; it was not taken down as hate speech despite attempts to report it.

TikTok seems to know that antisemitism is an issue on their platform. #Jews has been disabled and no longer works as a hashtag, for example, and the company promised to crack down on Holocaust denial. But creators feel this is a meager effort toward providing safety, and wonder why TikTok would choose to promote a hashtag like #MyJewishHeritage on its main page if it already knows that #Jews is dangerous.

“If TikTok is going to make a hashtag to give a platform to Jewish creators during this month, they should probably be doing more to protect us,” said Ezra in a video they posted Tuesday. “Otherwise, that hashtag is just a way for antisemites to find more Jewish people to harass.”

Far from promoting respectful engagement with Jewish culture, or giving Jewish creators a larger platform, #MyJewishHeritage feels more like a publicity stunt and piece of hashtag activism to Jewish creators. Many of the videos under the hashtag are not made by Jewish creators nor do they concern Jewish topics, and are simply using the hashtag in an attempt to get more eyes on their videos by using trending hashtags.

TikTok is also currently featuring a #WeAreAPI hashtag page to highlight Asian and Pacific Islander creators. As is the case with its Jewish equivalent, many of the videos on the page do not use #WeAreAPI and seem to have been chosen for the page by TikTok. While Jewish creators have heard similar stories of TikTok’s lack of protection against other minority groups, the videos under the @WeAreAPI tag do not seem to have gotten the same influx of hate as a result of being featured.

The Jewish creators I spoke with do not know how TikTok chose their video to put at the top of the page, nor whether TikTok has a list of Jewish creators or who curated the hashtag’s page. Rachel was frustrated also with the picture of Judaism presented by TikTok’s choices, which did not include any Jews of color, as well as the fact that many of the featured videos are about Passover, which occurred over a month ago.

“I’m flattered that they liked my content,” said Rachel, “but I don’t appreciate having my safety risked. If they want to promote Jews and tout our content, they have to foster a safer place on their app for Jews.”

Update, Friday May 7: Rachel’s video was removed from the top of the hashtag after the publication of this piece.