Nowy Sącz: A town in Poland becomes the center of a heritage tour. By Wikimedia Commons

I was looking for my roots, for a connection to my heritage. My late father was a Holocaust survivor and I was investigating his life before the Nazi invasion, when the pandemic closed many archives down. But I kept researching online and when Europe started opening up again in the spring, I arranged for us all to visit the Polish town of Nowy Sącz on a virtual tour.

Neither my children nor their significant others had ever met my father or knew of his world. But, at their upcoming wedding, my son and daughter-in-law will get married in my father’s tallit, so it felt like an especially good time to share my passion and show them all their links to our past. To help with the historical context, an expert guide would take us around the town where two Hasidic dynasties were founded (Sanz and Bobov) — and, crucially for me, where my father grew up.

Scouring genealogical websites and databases I began to find scattered remnants of the Jewish community of Nowy Sącz. I first found a Luks family in Pennsylvania who came from the same shtetl. “Luks” and “Lux” from such a small town — they had to be family! They themselves had found another Luks family in Israel who had been researching their past. It turned out that both the Pennsylvania and Israeli families owned the same family photo, though they could identify different people on it.

When I arranged the tour, I had originally thought to take only my nuclear family, but I told the other Luks to come along. And my cousins too. And then I invited friends of theirs and mine. 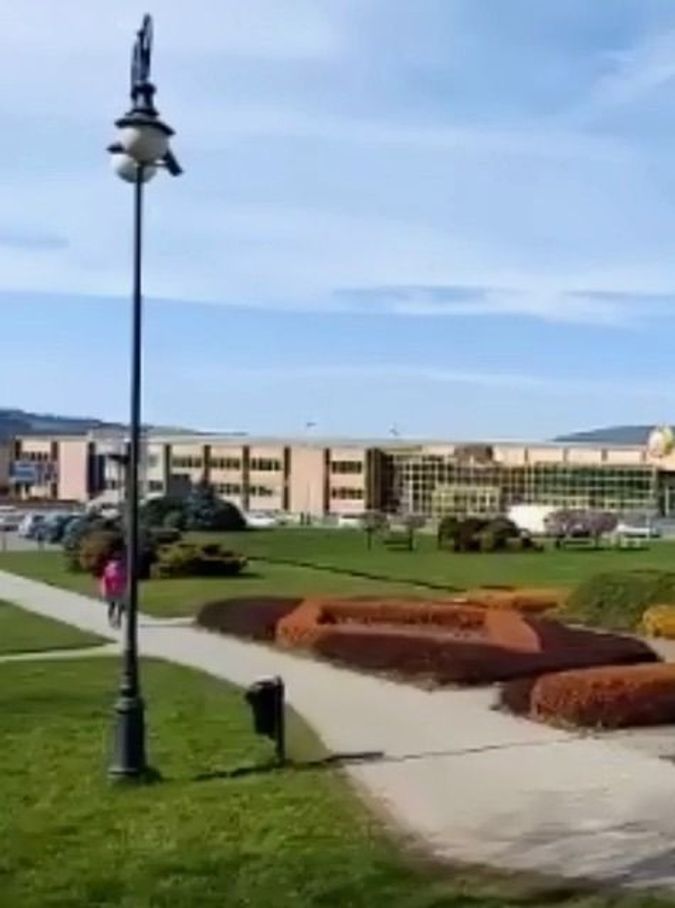 Today’s Claim to Fame: Koral’s ice cream factory is now one of the most notable businesses in the Polish town. Courtesy of Marshall Lux

My father never went back to Poland and never encouraged us to do so. He had lost all his family in the Holocaust — parents and siblings — and, as with many of that generation, he avoided buying anything German. He loved Yiddish though, and would religiously read the Yiddish Forward, go to read Yiddish poetry to folks at old age homes, and even perform regularly with the Folksbiene theater company.

Though he didn’t dwell on the Holocaust, we grew up keenly aware of it. Being the son of a Holocaust survivor is a defining identity for me. Most of the time it’s easy to hide, but it gives me an inner drive, a compulsion to settle his unfinished business. I grew up seeing a lot of numbers tattooed onto arms, hearing adults with European accents and I had almost no blood relatives except on my mother’s side. He was a happy man full of life, settled in his garment design career, but all his friends at work were survivors and I would occasionally wake at night to hear him screaming from his dreams.

On April 28 a new, improvised Lux/Luks community headed virtually back to the town in which he was born. My father, Simon — Michael Seymour Lux, once he reached America — would have known it by its Yiddish name of Sanz. Although an entire section of the Jewish neighborhood at the confluence of the Kamienica and Dunajec rivers had been demolished, he would have recognized many of the buildings we visited — from the castle to the Town Hall.

On our side of the screen we numbered more than 30 people: the Lux and Luks families, our friends and family, colleagues and a few interested observers. We were all on a Zoom meeting that our guide would join from his iPhone.

It was 9 a.m. on the East Coast and a bright, cold blue Wednesday afternoon in the south of Poland as our guide Christopher Skutela from Virtual Tours & Seminars introduced us to this small town of 80,000 nestled between Krakow and the Slovakian border. An eager, young Polish guide with an expertise on the Krakow area, Skutela greeted us enthusiastically from beneath his black beanie. With only one of the 20 or more synagogues remaining (and even that one little used), there’s now scant trace of the flourishing Jewish community from the early 20th century, but we began in one of them: the Jewish cemetery. 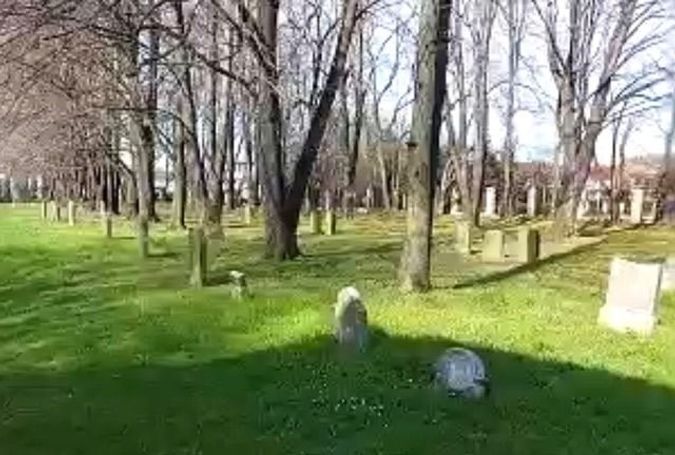 Remnants of History: The “new” Jewish cemetery which replaced the old one at the end of the 19th century contains a few original gravestones there from the last century. Locals say that the Nazis took many of the stones that were there in 1939 and used them to build. Courtesy of Marshall Lux

In the past 20 years, Sanz-Klausenberg Hasidim and others have erected a modest but pristine building around the nominal grave of Rabbi Chaim Halberstam, the founder of the Sanzer sect. Although this was the “new” Jewish cemetery which replaced the old one at the end of the 19th century, there are few original gravestones there from the last century. Locals say that the Nazis took many of the stones that were there in 1939 and used them to build, while almost none of the Sanzers who survived, returned. So, both authentic and new, real and virtual, practical but clean, it makes for a good starting point for a Jewish tour.

The Divrei Chaim, as he was known, lived in the early 19th century and his grandson, Shlomo Halberstam, was among those went to Bobowa where he founded the Bobov dynasty. Yet other Halberstams remained in Sanz until they fled for Israel and America. My father would attend meetings of the Sanzer Society in Manhattan when the current Rabbi Halberstam attended. He also volunteered to manage the Sanzer Society burial section at New Montefiore Cemetery on Long Island — assigning graves when survivors and their spouses died.

I wanted to see where my father had grown up and I had given the guide his address. From the grassy cemetery we could see the bridges over the smaller, Kamienica River that my father fished in as a boy. Skutela flipped between selfie mode on the camera as he explained some of the context and face-forward mode as he walked us out of the gates, past the commemorative plaques — including the one for Jakob Muller, the main restorer of this cemetery, who had returned to Sanz from his safe haven in Sweden to care for the cemetery until he died in 2010.

Skutela showed us the view looking down to where the rivers meet just behind Koral’s ice cream factory which is the town’s current claim to national fame. Along with a more central area further up the hill, this had been one of the main Jewish areas in the early 20th century. During the war, the Nazis forced the Jews into a ghetto away from the river and partially destroyed the lower neighborhood. Then, under Communism, the streets were completely demolished before sometime in the ‘90s, Koral bought the land.

This river junction was the reason for the foundation of the town and Nowy Sącz’s royal castle still stands on a hill looking down at it. Two roads now run across each river and met at right angles below the castle, with only Koral and its parking lot between the highway and the river. Until the war, though, the Jewish quarter with its two main streets, Rzemieslnicza and Lelewela, sat wedged in between the river and the protection of the local nobility. It was on Rzemieslnicza that my father had reached his teen years. The lack of anything more evocative than an anachronistic factory felt absurd and yet being here with my brothers and my children and my friends new and old, made it moving.

We moved up the town away from the rivers passing the castle, the town hall and the synagogue. It used to belong to the municipality but, in the past decade, was officially deeded back to the Jewish community in absentia. We walked past the hospital, the town square and the streets where the Nazis formed the ghetto from which Jews were sent to the Bełżec extermination camp in late August 1942. My father had already left the town before the Nazis occupied it in early September 1941, fleeing for the supposed safety of the Soviet Union.

The townsfolk were just beginning to emerge from COVID-19 lockdown and they seemed completely unfazed to hear a guide walking through the town, talking in English to a forward-facing iPhone. They might not have been surprised, but I was, to hear Skutela’s smattering of Hebrew and Yiddish words uttered with perfect Hasidic pronunciation. Soon we reached the end of Jewish Nowy Sącz and, after patiently answering our questions, Skutela said goodbye and promised to connect me to the latest Rabbi Halberstam.

My father passed away nearly 35 years ago, but recently I have become increasingly drawn to the things that made him — his Orthodox Jewish roots, his Polish history, his Holocaust survival. I didn’t think I’d find the key to who he was, or who I was, or the compulsions that were pulling on me.

I hadn’t reckoned on finding my father’s childhood home turned into one of Poland’s biggest ice cream factories but, on balance, I was delighted to have taken my family — new and old — back to Sanz. This particular virtual trip to his past was over, but my journey to find my father is well underway.

Marshall Lux is a senior fellow at the Mossavar-Rahmani Center for Business and Government at Harvard University’s John F. Kennedy School of Government. He serves as a member of the Forward’s Advisory Council.