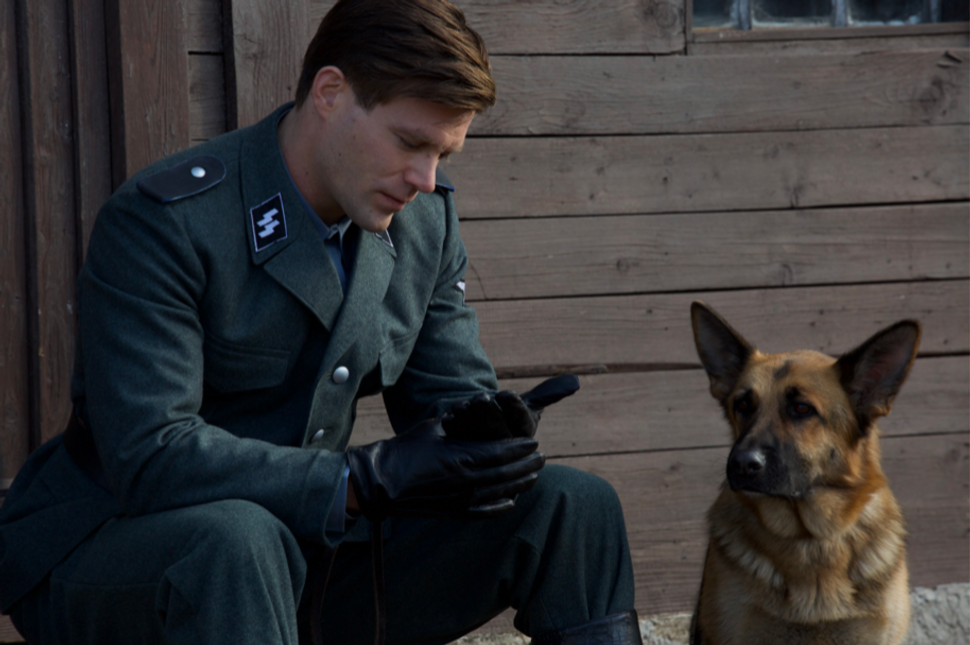 Kaleb and his his good buddy, the S.S. officer.

So even though the newest addition to the Holocaust canon, Lynn Roth’s movie “Shepherd: The Story of a Jewish Dog,” might initially raise your hackles, it seems promising. It’s based on an award-winning book, “The Jewish Dog,” by Israeli author Asher Kravitz, and features Israeli star Ayelet Zurer, of “Man of Steel” and “Shtisel.” 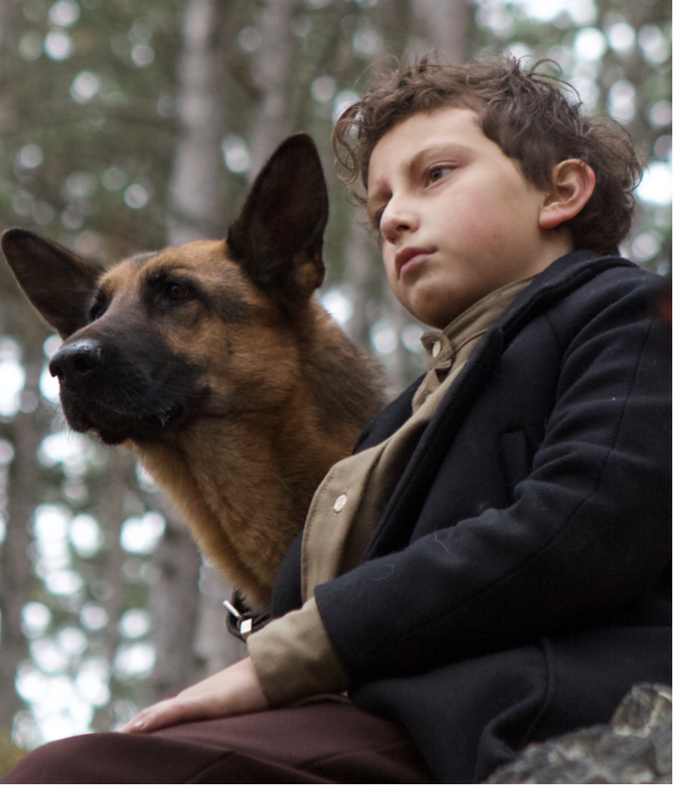 Our heroes, both boy and dog.

The movie follows Kaleb, a German Shepherd — yes, it’s a weird choice — owned by a Jewish family; he is particularly close with the little boy, Josh. As the Nazi regime begins to crack down on Jews, the family is forced to give Kaleb away, and he ends up with Ralph, an S.S. officer. The dog is renamed Blitz and becomes one of the best guard dogs in a concentration camp. But when the little boy who used to own him ends up at the same camp, the dog’s loyalties are challenged. Eventually, the two find each other, escape and end up sailing to Palestine together.

In the book, Kaleb is the narrator. But the movie’s creators decided a talking dog would be too gimmicky, so we get no doggish insights. Instead, we simply infer his feelings based on the position of his ears and his whines, just as we do with real dogs, plus a few doggy dream sequences.

“Shepherd” is as hokey as it sounds — plus a bit hard to follow, thanks both to clunky acting and some dog-only sequences. There are some on-the-nose metaphors about dogs not being allowed in certain stores, and S.S. officers questioning whether Kaleb is pure-bred. There’s even a scene in which a vet at the pound sends dogs left or right, sorting them between death and labor. It’s less “Maus,” more “Beatrice and Virgil,” Yann Martel’s trite Holocaust novel featuring taxidermied animals.

Plus it’s oddly saccharine. There’s a sequence reminiscent of Disney’s animal adventure film “Homeward Bound,” in which Kaleb falls in love with another stray — which we understand thanks to a close-up of them touching paws. There’s also a dramatic scene of boy and dog swimming to each other.

Most egregiously, the film does little to impress the horrors of the Holocaust upon its audience, nor does it humanize the victims as it’s literally about a dog. 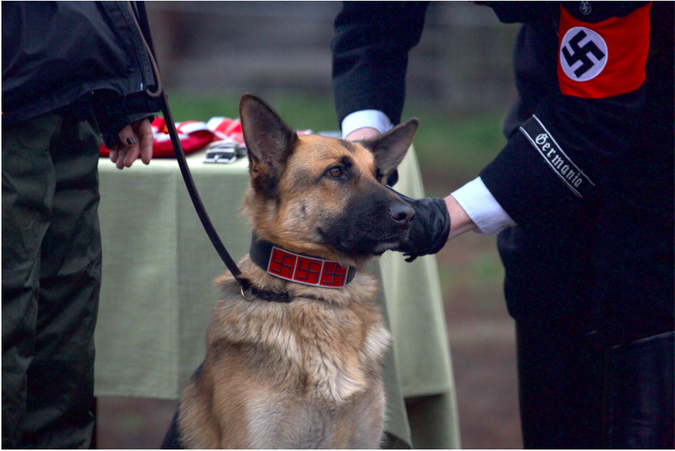 Kaleb during his brief stint as a Nazi dog.

In fact, at times the film makes the Holocaust seem, well, not all that bad. In what was perhaps an attempt to add nuance, Kaleb’s Nazi owner is nearly a good Nazi — he’s kind to the dog, and defends him when he is in danger, while we see little of his cruelty to Jews. A few anonymous prisoners are shot, but their deaths are in the background, barely noticed.

It feels as though the audience is expected to already know about the Holocaust. There’s no mention of war or gas chambers or even what happened to the rest of Kaleb’s Jewish family. There’s one shot of tattooed numbers and one of yellow stars — references familiar to many adults — but they’re not explained for the benefit of the children at whom the movie is presumably directed.

While an empathetic portrayal of a little boy’s longing for his pet might serve to anchor the Shoah, making its horrors tangible, focusing on the dog’s perspective strips away that possibility — dogs were not the victims of the Holocaust. Instead, the film becomes just an insipid attempt to make the Holocaust simple and palatable, things it should never be.

It makes you wonder: Why bother? Did we really need yet another Holocaust movie? What could a movie taking a dog’s perspective add to the wildly-saturated market? Is it just that, as in the scene of the dead puppy in “Apocalypse Now,” we can only really feel the gravity of innocence and victimhood via man’s best friend?

The Holocaust has already become an industry, dubbed “Holo-kitsch” by Art Spiegelman; the tragedy is mined for Oscar bait and guaranteed clicks. “Shepherd: The Story of a Jewish Dog” will not be up for an Oscar — though it did win the audience award at the Los Angeles Jewish Film Festival — but it’s certainly kitschy. It fails to educate on the Holocaust’s horrors, but perhaps it succeeds in epitomizing exactly what’s wrong with the mawkish Holo-kitsch industry.