For the grandfather of micro-drawing, it’s truly a small world after all 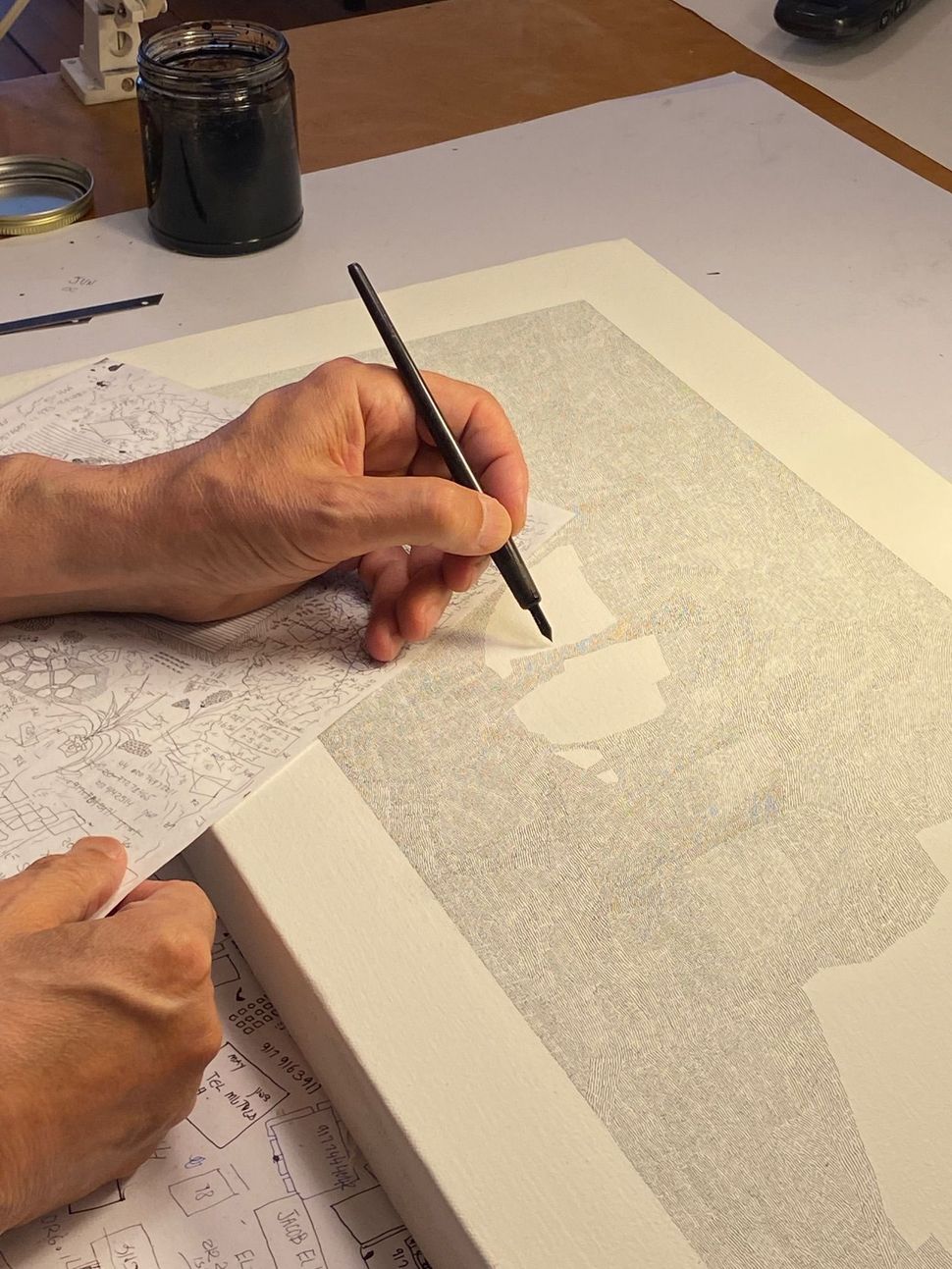 Making a Point: Artist Jacob El Hanani has been compared to a “sofer” or scribe.

The pandemic seems to have changed the world so that it now looks a lot more like the one artist Jacob El Hanani has always lived in. The 74-year-old Moroccan-born, Israeli-raised, New York-steeped “grandfather of micro-drawing,” has been tending to his intricate and painstakingly drawn canvases for over 45 years, in the same Soho loft that has served as his home and studio since 1974. Over these decades, he has worked close to 12 hours a day, every day. Though he does not own a computer and has never had an email address, he is certainly not a monk, as some endearingly dub him, but he is disciplined, committed and acutely aware of the finite time one has to work and create. He sits slightly hunched over his work, still and studious, like a 14th century sofer, as the Israel Museum once described him. “I take my time so as not to waste my time,” he says.

A new show at Acquavella Galleries, on Manhattan’s Upper East Side, showcases some of El Hanani’s recent works. It is a rare opportunity to spend time with his canvases, which require an engagement that allows the viewer the sensation of slowing down time. Numbering 21 canvases in total, the art on display ranges from El Hanany’s distinctive, smaller, linear iterations of Hebrew letters, such as “Ivrit” (2020) and “The Hebrew Barb Wire” (2018), to more strikingly abstract canvases such as, “Without Form and Void,”“Dot-Nekuda” and “Circle and Linescape” (2018). The latter at first conjures a pointillist’s neat trick, forcing the eyes to try and register recognizable shapes. Like an anxious mind sifting through disparate information to impose a narrative, El Hanani’s works prompt one to scan for patterns referencing the natural world. You finally have to accept it is a new and unfamiliar view and can only assimilate it as such. His canvases can serve as catalysts for letting go of the need to make sense. 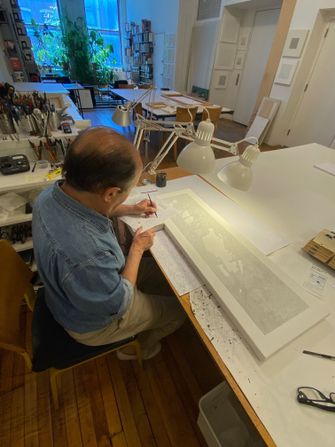 God of Small Things: The 74-year-old Moroccan-born, Israeli-raised, New York-steeped “grandfather of micro-drawing,” has been tending to his intricate and painstakingly drawn canvases for over 45 years, in the same Soho loft that has served as his home and studio since 1974. By Yael Friedman

El Hanani’s “linescapes” illustrate his impulses as a sofer and modern medium of the ancient and mystical. They simulataneously exemplify his apotheosis as an artist who came of age in 1970s New York. His particular path sets him apart from those of his peers and mentors of the period, such as Sol LeWitt and Agnes Martin. “There is no way that if I was born in Chicago and went to RISD (the Rhode Island School of Design) and moved to New York, I would be making this kind of art,” he said. He speaks of growing up watching things made by hand, slowly, and he emphasizes the evolution of the miniature in Jewish rites and rituals – tefillin and mezuzot containing sacred verse you can carry in the palm of your hand.

El Hanani has a natural ability to charm and regale, much at odds with an image of a monk, but a well-honed survival skill for a poor artist who has never had a job apart from his true vocation. When discussing this centuries’ long evolution of the miniature in Judaica, he recalled a Lenny Bruce bit. Bruce was puzzled by why his non-Jewish friends at his public school in Brooklyn got to have the more showy and fun holidays. He would come home with Christmas songs in his head, always disappointed that his immigrant Jewish parents could only compete with one or two candles. One day while they were out, to try and understand them better, Bruce quickly took down the mezuzah and opened it. He only had a brief moment to glimpse what was inside before he heard them coming back – he took a quick look and said, “Oh shit, my parents have a joint inside there; they’re so cool!”

El Hanani was born into a booming postwar Casablanca, to a middle-class family he describes as “manicure-pedicure petit-bourgeois.” His father was an accountant who “dressed to kill,” they spoke French at home, and he was surrounded by the gifts and trappings of a comfortable and urbane world. Like most Moroccan Jews, his family left in the early 1950s, arriving by ship in Haifa Bay in 1953. He had one of his first realizations about the diversity of the diaspora aboard the boat itself. As they were about to disembark, passengers from the lower decks started streaming out, many wearing long dresses and hoods. El Hanani stared at them and asked his mother, “maman, pourquoi les arabes viennent avec nous a Israel?” (Mom, why are Arabs coming with us to Israel?) His mother explained, “Toutes sont juifs!” (“They are all Jews!”)

The El Hanani family moved to a moshav (a type of cooperative agricultural community first founded in Israel in the early 20th century) and eventually to Petakh Tikvah. At an ulpan, his father, conspicuously elegant and refined for that setting, made an impression on a fellow student, a woman who was the president of a women’s Mizrahi organization. She asked him whether he’d like to come work for their school in Ra’anana. It was a religious school for World War II orphans — his father would have to wear a kipah and say the prayers. When he’d come home, he would remove it. Slowly, he grew to appreciate and enjoy the traditions and began absorbing them. As El Hanani describes it, it was a process of “na’ase v’nishma” – first do it and understand later. Friday nights transformed into special and solemn occasions in their household and they became more observant than their extended family, and in a more Ashkenazi way, particularly since, in Petakh Tikvah there was no Sephardic synagogue. 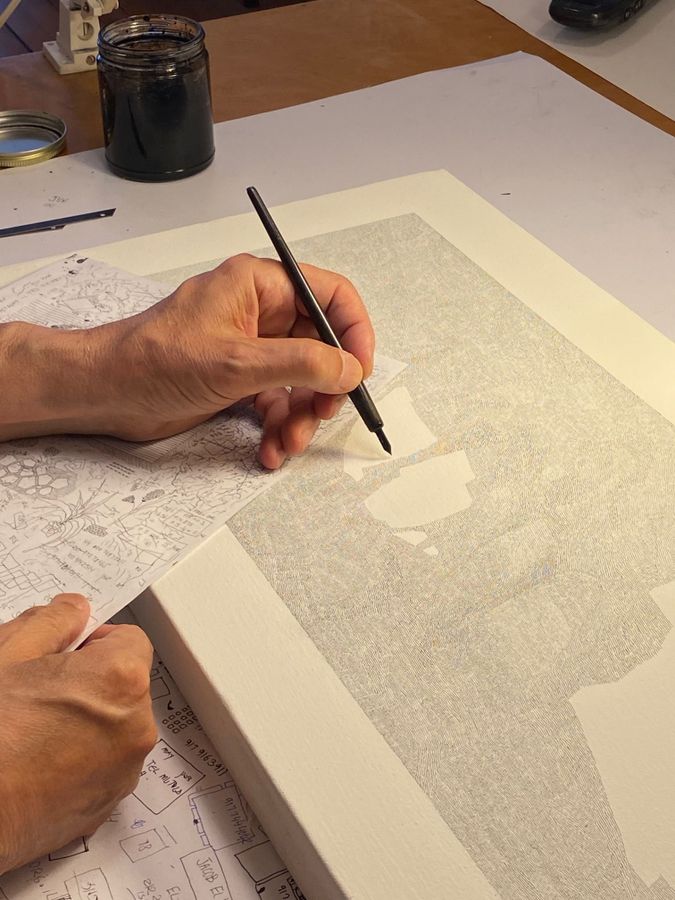 Making a Point: Artist Jacob El Hanani has been compared to a “sofer” or scribe.

This helps explain El Hanani’s fluency with scripture, liturgy, and his rabbinic commitment to sitting hours each day over his work – the forces of repetition and internalization of the Hebrew script and its mystical meanings naturally flowing through his hand to pen and paper.

At art school in Israel, El Hanani was limited by the slow flow of information into the young country. He says that his teachers did not know anything about what was happening in America. Only upon landing in Paris did he begin to understand the broader zeitgeist. In Paris, the well-established Israel artist, Mordecai Alon told him that Paris no longer provided the cultural ferment a young artist required in the same way that New York did. “So,” El Hanani says, “I took a trip to New York.” 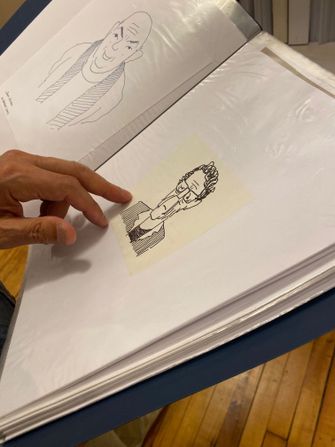 Another Side of His Art: Known for his work with miniatures, El Hanani is also a gifted caricaturist. By Yael Friedman

El Hanani is very candid about why he came to the United States – to be an international artist and not for any other reason. He says, “I didn’t flee a country, I came to New York to have an international career…I did not come here to be an immigrant or to make money. If I was born earlier, I’d have gone to Paris.” He half-jokingly says, “I didn’t know the first 40 years would be so difficult.”

El Hanani is a gifted figurative drawer (he has hundreds of cartoons and caricatures he has sketched of friends and famous individuals he has encountered over the decades – from Lou Reed to Henry Kissinger to Jesse Jackson to a brilliant double drawing of Bella Abzug across from Betty Friedan). He knows it helped his credibility with those skeptical of his dots, letters and lines that he could show he was al 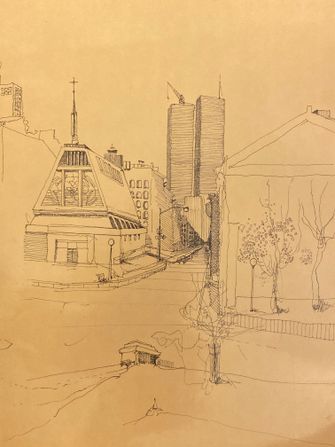 The Line King: “Jacob El Hanani — Recent Works on Canvas” is on display at Aquavella Galleries through June 18, 2021 By Jacob El Hanani

so a talented figurative artist.

On arriving in New York and immersing himself in the art then in vogue, El Hanani recalls:

“In 1972 I saw you had to eliminate anything that was figurative, that was pleasing, that was decorative, everybody had to be cerebral, conceptual, minimalist. It was a complete shock to me. I didn’t come from fast food and fast art, from the quick and immediate. I came from the tradition of as we say in the Sephardic way, in the desert things are very slow very quiet –where do you rush? Where do you go? The idea that time is money, and everything is fast, including art, I could not take it. I was influenced (by it) but I went to a more opposite, maximalist way.”

The world outside El Hanani’s doors is regaining some of its American tempo. And yet the shock of the past year seems imprinted on even this quickening of the pace. It feels furtive, unsteady, like we are all awaiting instructions on how to proceed. El Hanani’s steady, laborious, process and his canvasses, are a reminder of what to retain from this year of the unknown, of having time completely reconfigured within what often feels like an internal exile. In exile, you wait for a future whose shape you cannot predict. El Hanani’s work helps transcend that almost primitive need to know.

“Jacob El Hanani — Recent Works on Canvas” is on display at Aquavella Galleries through June 18, 2021.

For the grandfather of micro-drawing, it’s truly a small world after all