Despite war and political unrest, at the Mediterranean Biennale, the art must go on 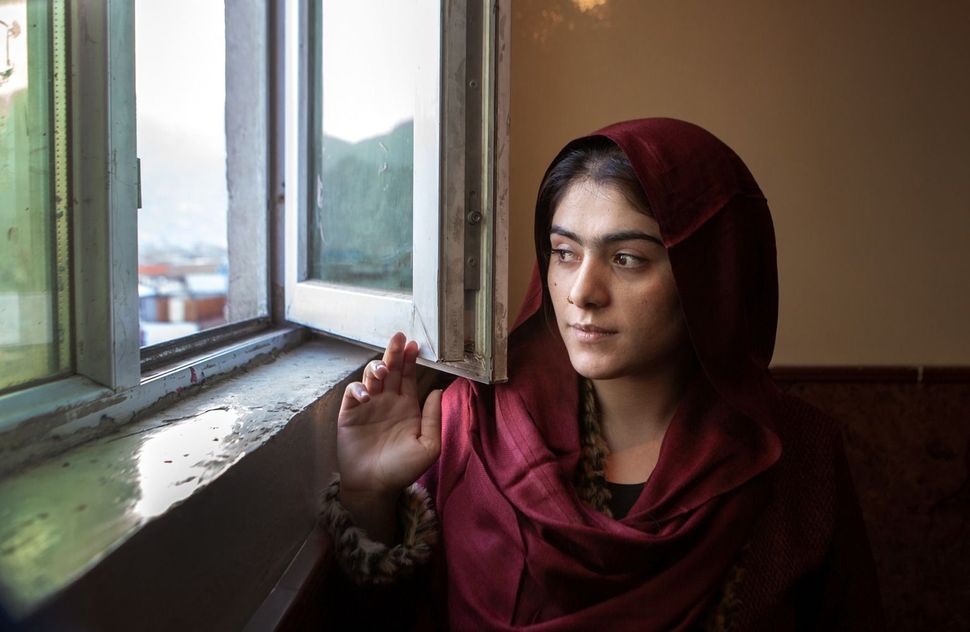 The Undaunted Women of Kabul: Ahmadzi immigrated with her family from Kabul to Germany at 17, and since 2003 has been going back to Afghanistan, to create photographic and video based projects that capture local life experiences. By Lela Ahmadzi

The fourth Mediterranean Biennale presents works by 60 international artists in public spaces across Haifa and Sakhnin Valley. The exhibition joins art world superstars, rising stars and emerging voices from countries that are rarely seen in Israeli museums and galleries, including Iran, Afghanistan, Turkey and Bahrain.

In response to the pandemic, curators Avital Bar Shay and Belu-Simion Fainaru, in collaboration with the Wizo Academic Center, have titled the event “Living Together – Crossing Borders,” reflecting issues of solidarity and interpersonal interaction in the cityscape at a time of social distancing and isolation. In Haifa, one of the few mixed cities in Israel, the stitches that hold the fabric of everyday life are bound by complicated, conflicting realities experienced by various diverse communities. Negotiating fraught relationships against an already tense background, the Biennial was put to an even greater test during the brief-yet-deadly conflict between Israel and Hamas. 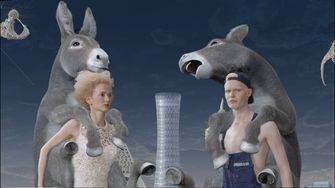 Role Reversal: In the world of AES+F, chimeras are pets and the apocalypse is entertainment. By AES+F

“The Biennale did not pause during the war,” Fainaru said in an email. “We believe you have to keep going, and art is one of the few domains that can maintain our sanity and serve as a bridge to connect communities, in this case, Jews and Arabs, at a time of conflict. As Haifa and the north of Israel were not under constant attack, audiences continued to visit. The works are displayed in cafes, hair salons and hotels that are owned by Jews and Arabs, or by Jewish and Arab partners. That is the essence of the Biennial, to see art as a space for dialogue and interaction between Jewish and Arab communities, expressing the multiculturalism of Israeli society.”

The Biennale now marks a decade of activity, and, despite its optimistic vision, that activity has not been without controversy. In previous years, the generous budgets raised by the organizers from municipal and governmental agencies were criticized for taking money away from local initiatives led by Arabs. In 2017, shortly before the opening, famed Lebanese artists Walid Ra’ad and Akram Za’atari learned through online announcements that a French collection donated their works for display in Israel. Furious, they demanded their immediate removal. Zineb Sadira, Bouchra Khalili and Yto Barrada made similar requests. The works were meant to be shown in private spaces and residences in Arab majority areas, such as Sakhnin, Dir Hana and Arabe. This year, with the focus on public spaces, concerns were raised regarding the conditions in which the works are shown. And yet, the curatorial attempt to reflect global creative responses to times of great uncertainty, featured outside of museum settings, charts a possible route for re-connecting and re-viewing the world.

Here are some of the works on view: 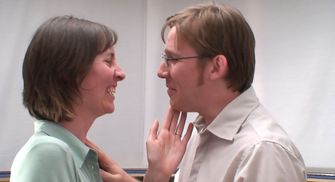 Public Display of Affection: In his video, Saiz blurs the limits between reality and fiction, between intimacy and public spaces By Manuel Saiz

For this video, the filmmaker and writer built an automatic film set designed to recreate a climactic cinematic sequence, during which the camera turns around the characters as they reach a realization, amplified by lighting and sound effects. Saiz created this moment for the audience, blurring the limits between reality and fiction, between intimacy and public spaces. 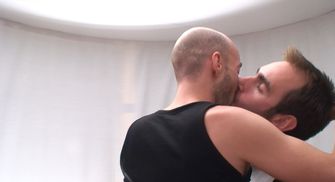 Climactic Moment: Manuel Saiz’s work imitates a cinematic sequence in which a camera turns around the characters as they reach a realization, amplified by lighting and sound effects. By Manuel Saiz

“The public can come to the center of the stage,” he said in an interview in 2014. “A button is pressed and this moment happens for members of the audience while they show their affection — they might kiss, they might hug. Sometimes they look at each other with affection. In one location, a pregnant woman wanted to express her affection to her baby in the womb, a couple was holding their kid, and the camera turned around them in this intense moment of apotheosis.” A clip was recorded and later sent to participants, as a souvenir. 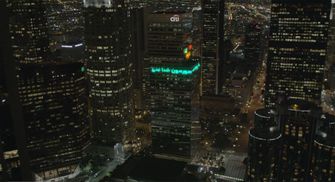 Tehran Meets L.A. This video amalgamates Tehran and L.A., fusing both in an impossible vision. It speaks to “the short-lived westernization of the Iranian capital of the 1960s and 1970s.” By Arash Nassiri

Nassiri uses found footage and archival materials to produce videos that offer private, fictional utopias. “Tehran-Geles” references the nickname given to Los Angeles by the Iranian community. This video amalgamates Tehran and L.A., fusing both in an impossible vision. “Indirectly referencing the short-lived westernization of the Iranian capital of the 1960s and 1970s,” Nassiri writes about this work and his 2018 “City of Tales,” “the films look at Los Angeles as the model Western city for Teheran and reflect upon its failed promises of modernization.” 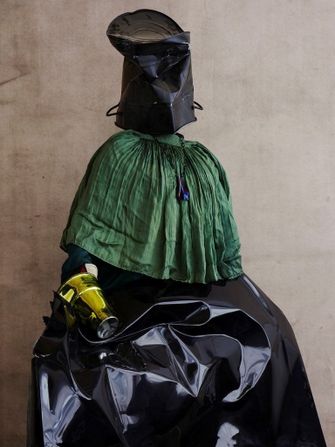 Untitled: The images in Brinkmann’s work play on how we present ourselves to the world the image we have of ourselves becomes a symbol for our identity. By Thorsten Brinkmann

For his series of surrealistic, Baroque-inspired portraits, Brinkmann himself became the protagonist, posing for the camera with a face covering and outfits made of various materials, including shiny vinyl or skirts turned into capes. The images play on how we present ourselves to the world, and how, as he wrote, the image we have of ourselves becomes a symbol for our identity. The various objects used to cover the artist’s head echo other images — of hijacked people in captivity or tortured prisoners. Brinkmann plays on that imagery, creating an image of affluence with everyday materials, of violence with wealth. 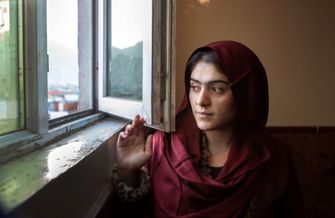 The Undaunted Women of Kabul: Ahmadzi immigrated with her family from Kabul to Germany at 17, and since 2003 has been going back to Afghanistan, to create photographic and video based projects that capture local life experiences. By Lela Ahmadzi

Lela Ahmadzi immigrated with her family from Kabul to Germany at 17, and since 2003 she has been going back to Afghanistan to create photographic and video based projects that capture local life experiences. “The Undaunted Women of Kabul” chronicles four monologues by local women. The portrait shown in the Biennial is of Pari Ghoulami, a young singer who performs for hundreds of men, whose father receives death threats for allowing his daughter to work in this profession. She tells Ahmadzai she is concerned that when the Taliban will take over again, women’s rights will completely disappear. “If someone wants to kill me, I don’t mind dying for art,” she says. 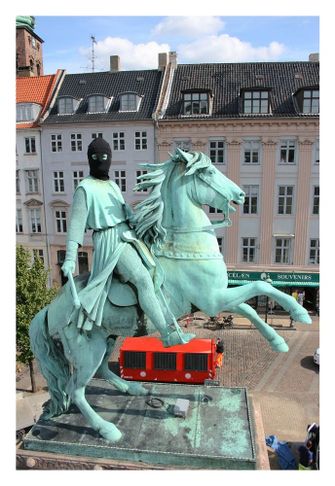 Stolen History: This installation was first presented by the Romanian-born Berlin artist at the Łódź Biennale in 2010, in which he covered a public sculpture in a balaclava, or a ski mask. By Daniel Knorr

Tackling methods for introducing official historical narrative into public space, asking what should be remembered and what should be erased from our collective memories, Knorr is known for his use of unconventional materials such as cocaine, casts of potholes and smoke in various media, including sculpture, performance and graphic works. “Stolen History” captures an installation he first presented at the Łódź Biennale in 2010, in which he covered a public sculpture in a balaclava, or a ski mask. This was an additional iteration of an installation he created two years earlier, in Copenhagen, where he placed balaclavas onto monuments as part of the “U-Turn Quadrennial for Contemporary Art.” These installations made historical figures — kings, bishops and generals — look like terrorists. Local police, to note, made the organizers remove the ski masks a few hours after the opening. 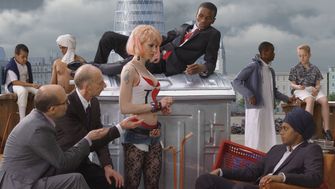 Inverso Mundus: In this 2015 work, extreme environments are unraveled, depicting seemingly implausible or, at the very least, unexpected conditions and circumstances By AES+F

Lev Evzovich, Tatiana Arzamasova, Vladimir Fridkes and Evgeny Svyatsky have been working together as AES+F in Moscow since 1987. “Inverso Mundus” or “World Upside Down” references satirical engravings, presenting reversal of roles and societal functions that were circulated widely across Europe since the 16th century. In this world, animals ride their masters, and students punish their teachers. “In our interpretation, the absurdist scenes from the medieval carnival appear as episodes of contemporary life in a multichannel video installation,” they write, “a world where chimeras are pets and the apocalypse is entertainment.” 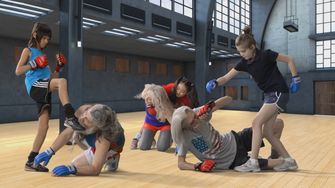 This world of extreme environments is unraveled, of seemingly implausible or, at the very least, unexpected conditions and circumstances: hybrid animals flying through the skies, glove-wearing pig slaughtering a human, elegantly-dressed women torture men on Ikea-style contraptions in a warehouse, teenage boxing girls fight elderly women in a choreographed, poetic sequence.

The Mediterranean Biennale runs through June 30, 2021

Despite war and political unrest, at the Mediterranean Biennale, the art must go on