A racist secret society crowned Ellie Kemper queen. But what on earth is the Veiled Prophet? 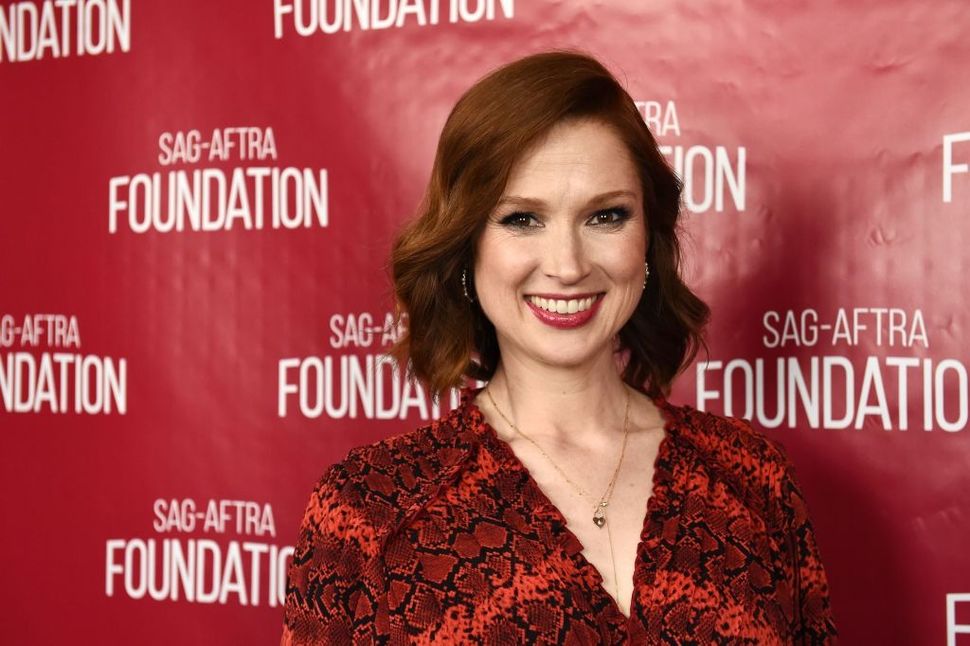 You may have forgotten about “The Unbreakable Kimmy Schmidt,” one of Netflix’s first original series, until its star, Ellie Kemper, started trending on Twitter for being crowned a debutante princess — by an organization with white supremacist ties.

Kemper was crowned with the rather flowery title of Queen of Love and Beauty at the Fair Saint Louis, a giant parade and debutante ball previously known as the Veiled Prophet Ball.

Like many country clubs and debutante societies, the Veiled Prophet Organization didn’t allow Black or Jewish people to be members until 1979. Though it was never literally run by the Ku Klux Klan, the eponymous prophet’s outfit, with its peaked, cone-like hat and white robes, certainly evokes the Klan, and many St. Louis residents saw the organizations as connected even if there were no institutional ties.

Of course, exclusion and elitism are the guiding philosophies of debutante society by definition. But the Veiled Prophet Organization seems worse than most. Why are the prophets veiled? What are they even prophets of? And why do they dress like Klan members?

The organization was founded in 1878 by a Confederate cavalryman — off to a great start — named Charles Swayback. Swayback gathered businessmen, civic leaders and other wealthy Missourians in St. Louis to found a secret society: The Mystic Order of the Veiled Prophet of the Enchanted Realm.

The society was ritualistic and centered on a mysterious prophet, the “Veiled Prophet of Khorassan, a mystic traveller who inexplicably decided to make St. Louis his base of operations,” as Scott Beauchamp wrote in The Atlantic. The founding members drew from both Thomas Moore’s poetry and New Orleans Mardi Gras celebrations to create an exclusive yearly fete with an elaborate ritual involving — you guessed it — a veiled prophet who would choose a queen; for the townspeople, there would also be a public parade and celebration.

No one can say for sure what drew these elites to mysticism and prophecy. Presumably, it was for the Founding Fathers Masonic vibes, and for the built-in gatekeeping and assertion of power.

In fact, according to Thomas Spencer, historian and author of “The St. Louis Veiled Prophet Celebration: Power on Parade 1877-1995,” the powerful vibes were exactly why. Chicago was growing, and St. Louis leaders were worried their fair city would be overshadowed. A secret society would add to the reputation of the city, and the events would bring in visitors.

Spencer also believes the Veiled Prophet was a response to more immediate events, including the Great Railroad Strike of 1877. The strike occurred across the country, but was particularly well-organized in St. Louis, where white and Black people came together to advocate for better conditions and greater economic equality. While St. Louis businessmen beat back the strike with the help of state militias, the upper class wanted a way to reassert its power.

The first Veiled Prophet Fair and Ball were held the next year, 1878, staged to celebrate the end of the strike. It also drew attention to where the white male elite of the city wanted it — themselves — and away from union and socialist rallies. 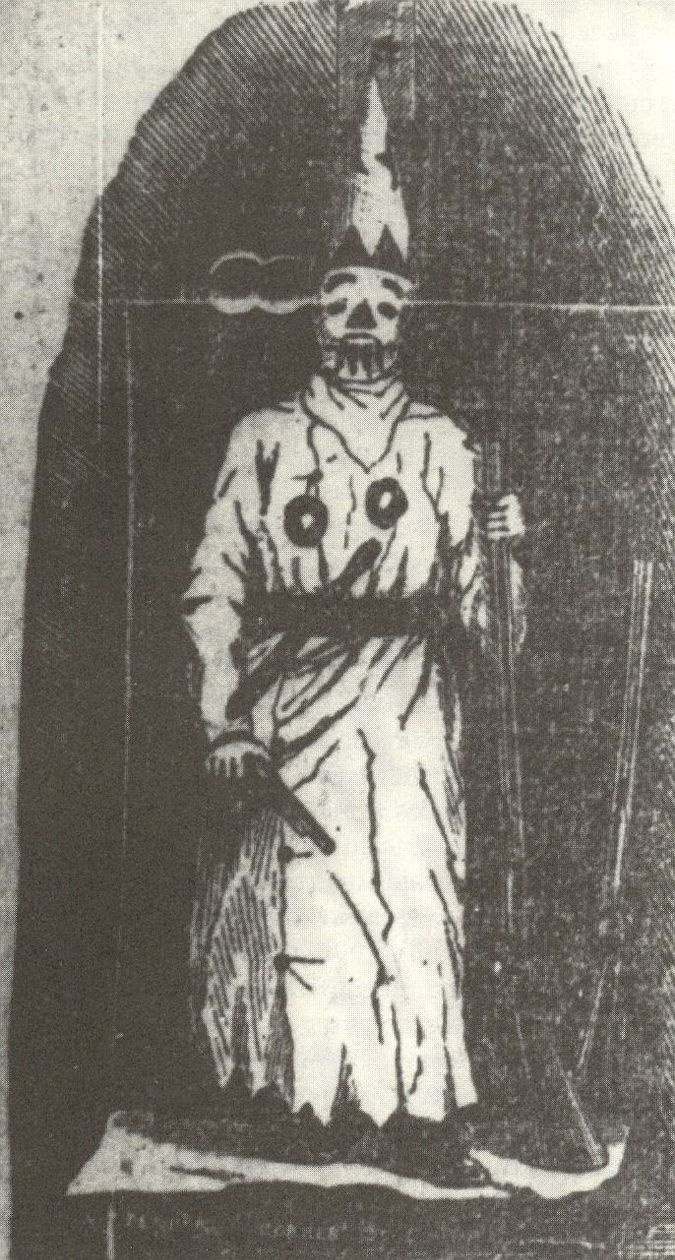 Image of the Veiled prophet from the October 6th 1878 issue of the Missouri Republican. Image by wikipedia

The 1878 parade featured 17 floats outlining the process of society from barren wasteland to Industrial Age riches, showcasing St. Louis heroes who just happened to be the ancestors of Veiled Prophet members. The members themselves paraded through the streets on top of mythologically-themed floats, dressed as royalty, to symbolically reinforce their superiority.

But it wasn’t just symbolism; the first prophet was armed with a shotgun and dressed in hooded robes. The costume was reminiscent of the Ku Klux Klan, which was founded not long before the Veiled Prophet, in 1865. While the peaked robes would not be standard Klan wear until the 1900s, they were already easily recognizable, and the Prophet wearing similar garb made the group’s threat explicit.

After the parade, there was a ball. A different member of the organization would act as the eponymous prophet each year, wearing white robes and covering their face with, yes, a veil. The prophet’s identity was kept strictly secret, though it became a local guessing game; to date, only two have been publicly identified — a police chief and a Monsanto executive.

At the ball, the Veiled Prophet crowned a Queen of Love and Beauty from the debutantes attending, largely daughters of the members, and they would dance a “Royal Quadrille” together. He would also present her with an extravagant, often jeweled, keepsake.

The power of a parade 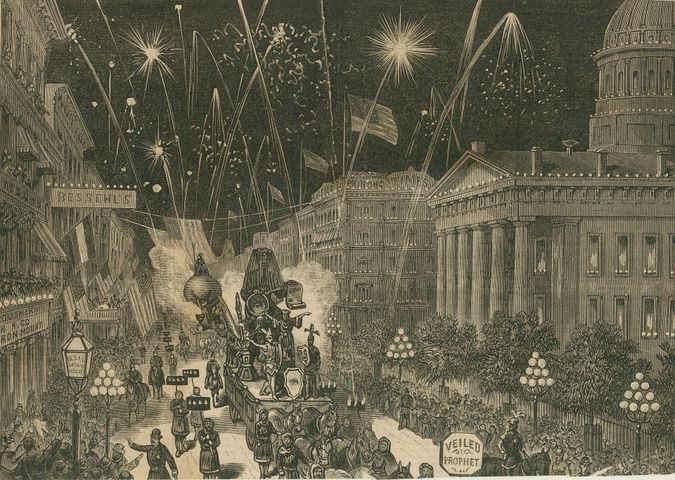 The Veiled Prophet parade’s emphasis on wealth and class divide — even as it ostensibly painted the upper class as benevolent, hosting festivities for the lower classes — was a way to teach morality, history and class structure to the city’s denizens.

While a parade may just seem like a silly event for families, Spencer writes that in the 19th century, “parades were part of a public discourse.” Access to the street was democratically available and everyone from union members to government officials could put on demonstrations. But after industrialization, demonstrations required street permits, and street events became the domain of the city’s most powerful.

While some certainly enjoyed the Veiled Prophet festivities, the parade was not warmly welcomed by everyone; according to Spencer, there was public backlash against the racial stereotypes on some floats, and concurrent counter-parades held by unions mocked the gaudiness of the Veiled Prophet. In fact, the anti-Veiled Prophet festivities became an attraction themselves. Even today, local confectionaries still sell pea-shooters on the day of the parade to continue the tradition of resistance.

During the Civil Rights era, from 1965-1980, activists began to focus on the secret society’s exclusionary policies, as well as the taxpayer money with which they funded their yearly celebrations.

In 1972, Gena Scott and Jane Sauer, both members of the Action Committee to Improve Opportunities for Negroes (ACTION) made headlines when they crashed the ball. Both ACTION members were white women; Sauer was Jewish. Once there, Scott slid down an electrical cable to the stage, Mission Impossible-style, ripping the veil off of the prophet, who turned out to be a Monsanto executive, while Sauer threw leaflets accusing the society of racism. The front-page St. Louis Dispatch story on the event, however, said that no one identified the prophet.

Sauer had grown up pushing against St. Louis’s exclusionary policies. In an interview with the Smithsonian, she talked about attending a private school with a strict quota for Jews, and the impact this had on her later activism. At her private St. Louis high school, she was barred from the school’s fortnightly dances, and had to hold separate events with a group of only four or five other Jews from the school; there were too few of them for a dance, so they would just eat popcorn.

By 1979, after several other ACTION protests, the Veiled Prophet began admitting Black and Jewish people.

While the Veiled Prophet organization still exists, the parade is less didactic and the main event has become a fair, today known as the Fair St. Louis to obscure its historic ties to the secret organization. The ball and the crowning of the Queen of Love and Beauty, however, have changed little.

Though the Veiled Prophet website says its debutantes are chosen for their commitment to community service, Sauer — who is now an artist in her 80s — told Buzzfeed News that any overhauling of the organization’s roots and purpose is “cosmetic.” The membership list is kept secret and diversity cannot be assessed; the ball is still listed as private and invitation-only.

Ellie Kemper was a teenager when she was crowned, and likely too used to her wealthy background to think about the Veiled Prophet’s history at the time — though her continued lack of a statement apologizing after the story went viral is strange. But the irony of her character, Kimmy Schmidt, escaping a fake prophet to live with a gay Black man and work for a rich wealthy woman, is sharp juxtaposed with Kemper’s real life.

A racist secret society crowned Ellie Kemper queen. But what on earth is the Veiled Prophet?