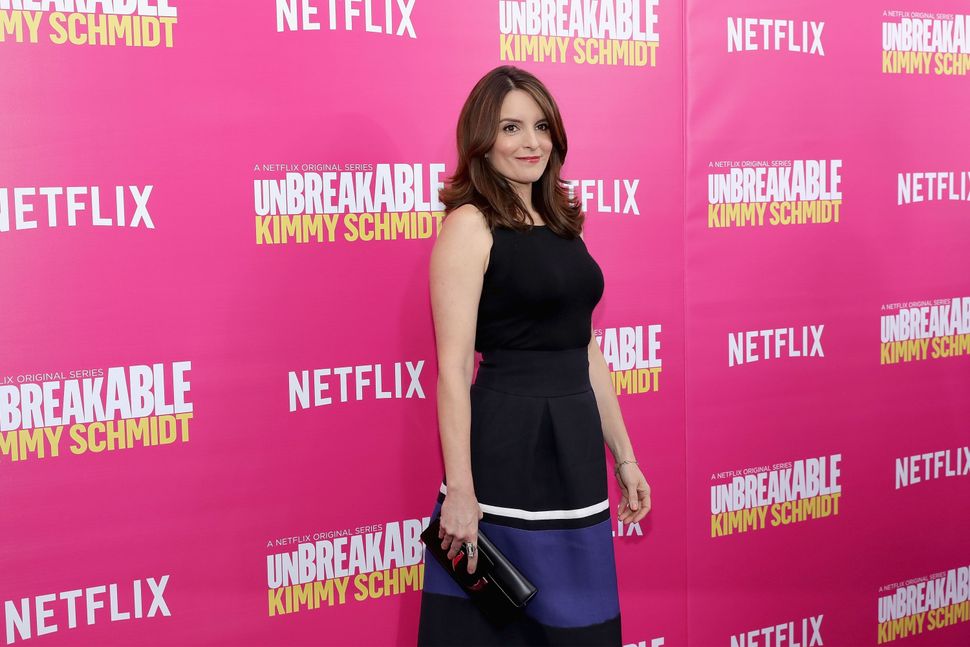 Jews love to get offended, and for good reason — the world is disgusting and most people hate us!

So when we heard that the fourth season of Tina Fey’s Netflix show “The Unbreakable Kimmy Schmidt” was offensive towards Jews, we were eager to throw ourselves into the fray.

One of our favorite Jewish publications printed essays decrying anti-Jewish moments in the fourth season of the show — “Kimmy Schmidt’s Unbreakable Anti-Semitism” and little pockets of Twitter filled with similar criticisms, as they have after other seasons of the show have debuted. The previous season of the show also provoked a writer for the Times Of Israel to decry what she called “Unbreakable Kimmy Schmidt’s Jew Problem.”

So we watched the new episodes of Tina Fey and Robert Carlock’s show only after having settled our affairs, giving us the freedom to collapse into a rage coma without causing our loved ones undo stress. And we weren’t being crazy, by the way! Didn’t the classic show “Sex and The City” essentially portray Jews as lovable but disgusting hairy pig-people? Didn’t the otherwise zany “New Girl” portray Rabbis’ daughters as unsexy, sex-crazed fools and Rabbis as creepy tyrants? Even our beloved “Mindy Project” couldn’t imagine a Rabbi as anything other than a greasy, money-obsessed gremlin. And that was in the year of our Lord, 5774! (Or as some would have it, 2014.)

Guys…we don’t know what to tell you. We thought it was pretty funny.

Whether or not something is offensive is often subjective. And each Jew is within her right to feel discriminated against without permission from us. But we posit that these jokes aren’t anti-Semitic, and that the premise of “The Unbreakable Kimmy Schmidt” — the assimilation to society of a woman who was abducted, imprisoned, emotionally abused, and likely sexually assaulted for fifteen years, but is nevertheless “strong as hell” — is darkly relatable for Jews, and its jokes are apt to be equally challenging.

There are two Jew-focused jokes that the Alma article objects to in season four: one includes a character indicating a game of quidditch and saying, “That white nonsense is either Judaism or Scrabble.” The other is a moment in which an off-camera voice that seems to belong to some kind of spy hones in on Kimmy with a camera and says, in subtitled Hebrew, “I have eyes on the target. Moving to phase two.”

The quidditch line is said by this character, Titus Andromedon.

Titus’ character exists to be absurd, self-centered, awful, and beloved. It is not reasonable to believe based on this comment that the creators of the show think Judaism is either exclusively white or nonsense.

As for the moment at the end of the final episode in which a spy speaks in Hebrew, which Alma writes “strongly implies that this Hebrew spy is a ‘bad guy’”…chaverim and chaverot, we don’t know what to tell you. It is actually not crazy to imagine an Israeli spy character who is playing for the wrong side — we’ve witnessed some of those recently, in real life. And it’s not offensive to portray a former spy as a spy.

But, Jews as a group?

They alive, dammit! And no one knows that better than season four “Kimmy Schmidt.”

What the internet neglected to mention was that most of the fourth season feels like a non-stop Jewish comedy festival written to appeal directly to Jews. We here at the Schmooze tried to watch the show while eating an enormous amount of food and we kept choking and having to spit it out because we were laughing so hard.

Here were some of the best Jewish jokes:

Lillian: Of COURSE I don’t support his politics! I’m just telling you those were the best steaks I ever ate! Artie: (Sarcastically) Oh, but you won’t drink carbonated water that was made in the settlements?

Are you kidding me with an in-joke about a politically liberal Jew and a politically conservative Jew arguing about Sodastream at minute 2:36 in the first episode? This is art. Where is this show’s Genesis Award?

Lillian: (talking about her boyfriend’s ashes) He wants to spend eternity at his old summer-camp on the Lower East Side — Camp Schmutz, for Jewish boys and their mothers.

Lillian: I got leftovers. I made kugel for two but Artie’s dead and I didn’t eat my share because it’s kugel — it’s disgusting!

Sorry, again, but it was time for the truth to be told!

4.The parody of “The Merchant of Venice” line

This is just such a delight.

Lillian: Oh, don’t act so innocent, I know a coke necklace when I see one Sheba: Coke necklace? No, this is the mezuza from my grandparents’ home in Poland. They lived above the original B&H Photo in Krakow.

Come on, that must be the least anti-Semitic joke ever written.

6.The joke about Reform Jews

Sheba: The synagogue is very Reform. The rabbi has to be a lesbian.

A joke about my denomination of Judaism on Netflix’s longest-running original series! America truly is paved with gold!

In the same episode, characters buy mirror covers from “schmatta.com” and there’s some weird commentary on the phrase “jewed down.” At the funeral, a character gives “a beautiful reading of the menu from ‘Sammy’s Roumanian’,” a Jewish restaurant in New York. I feel seen by this.

7.The full-scale recreation of The Akedah (The Binding of Isaac) with a JanSport backpack

I don’t know what to say about this except it is 100% a reference to The Akedah, and you have to watch it to believe it.