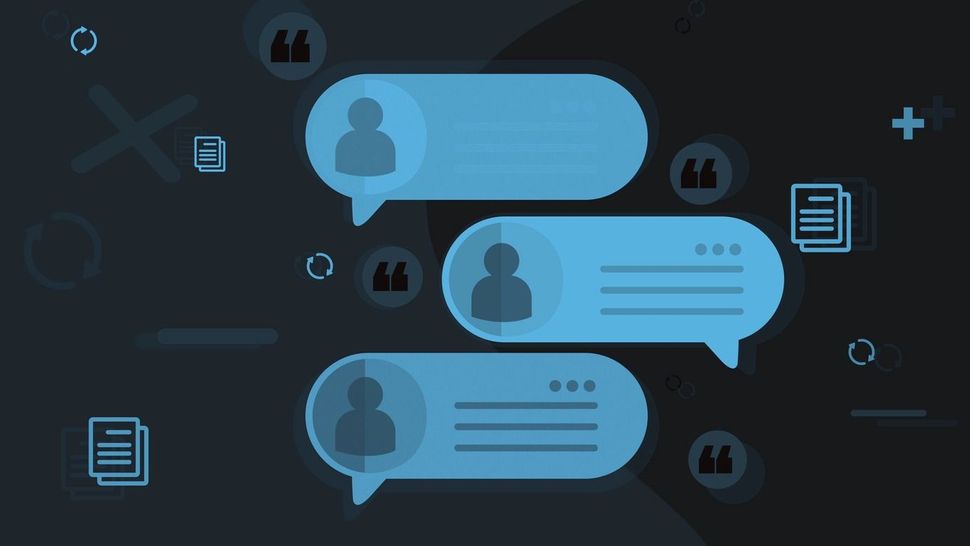 While Israel and Hamas militants in the Gaza Strip traded missiles in May, a parallel war exploded on social media. And though analysts disagree about the relative gains of Israel and Hamas on the battlefield, in the field of social-media, the pro-Palestinian cause seems to have increased its share of hearts and minds — or at least Instagram followers.

Far-left Jewish groups such as IfNotNow and Jewish Voice for Peace (JVP), both of which focus on opposing the Israeli occupation of the West Bank and supporting Palestinian independence, had much smaller followings than their pro-Israel compatriots before the latest conflagration. Yet as global attention focused on Jerusalem and Gaza, and posts about the region began to go viral, both groups’ accounts swelled exponentially. 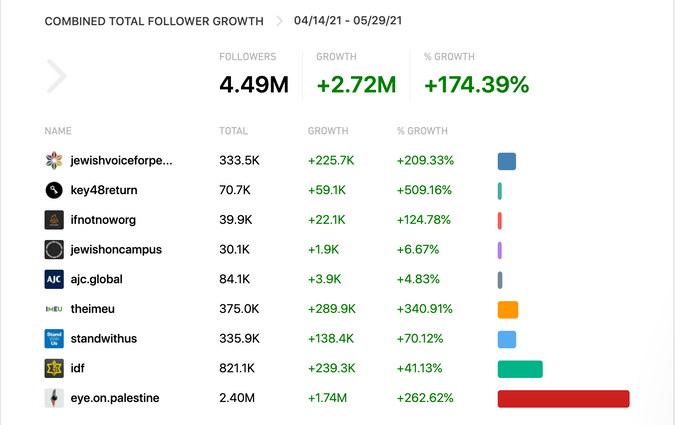 Follower growth statistics for pro-Israel and pro-Palestinian groups on Instagram. Courtesy of Crowdtangle

Any global analysis of something as ephemeral as social media influence is challenging. Major Zionist organizations such as StandWithUs and the Israel Defense Forces itself also saw large growth during the same time period, and in raw numbers actually added more total followers — about 395,200 combined — than IfNotNow and JVP. But those groups also started with far larger followings, and organic growth is generally faster from a larger base.

When broadening the lens to include non-Jewish accounts like @eye.on.palestine and the Institute for Middle Eastern Understanding (IMEU), the shift is more clear — Israel’s critics have a significantly bigger reach than they did a month ago. And while Stand With Us and the IDF made pointed, strategic decisions in their social posting during the conflict, spokespeople for JVP and INN said the sudden surge in followers caught them by surprise, leaving them trying to figure out how to most powerfully leverage the larger base.

Jewish Voice for Peace had followers in the low 100,000s on Instagram through most of April, but those numbers began to grow as #Sheikh Jarrah, the East Jerusalem neighborhood where Israeli settlers have evicted Palestinian families, began to trend. In May, as missiles started flying, the group’s followers spiked, more than tripling by the end of the month to 333,500 as of May 29.

IfNotNow’s Instagram following, which was in the 17,000s in April, more than doubled during the same period.

And Key48Return, which advocates for the rights of Palestinian refugees and their descendants to return to homes they fled or were forced from inside Israel proper, grew 780%, from 8,000 followers in April to 71,000 by the end of May. The growth came largely because the group made the war’s most widespread and copied infographic against Israel, which was reposted by accounts with huge followings, such as that of supermodel Bella Hadid.

It is difficult to assess whether the changes were similarly large on Twitter, which does not allow third-parties to track analytics; Facebook followings for these groups were largely unaffected.

As attention to the region begins to ebb in the wake of a cease-fire, pro-Palestinian groups are left with a surprisingly large audience, and the puzzle of how to engage their new followers outside of social media.

The growth came as a surprise to Jewish Voice for Peace, a left-wing Jewish advocacy group founded in 1996 which opposes the Israeli occupation of the West Bank.

“We didn’t try to grow,” said Tallie Ben Daniel, the group’s director of special projects. “It was just sort of happening with the news cycle.” 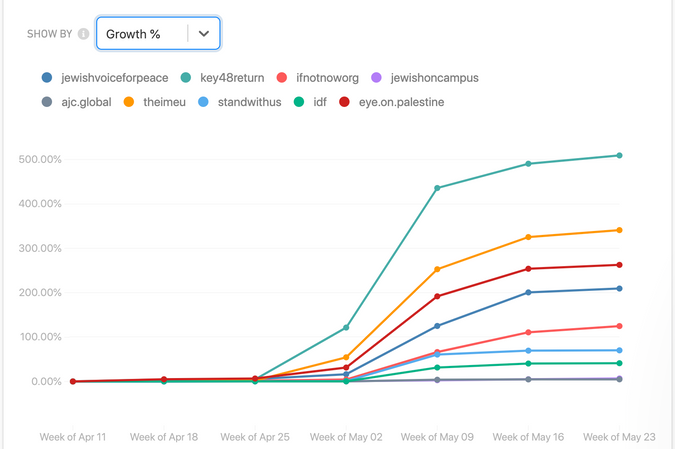 Both IfNotNow and JVP’s posts are a mishmash, rarely the sort of visually cohesive, made-for-social-media infographics and posts you see on more polished pages.

“That’s not exactly our style, honestly, which is less of a strategic decision and more of, like, it takes a lot of work to put an infographic together” explained Ben Daniel. “The labor of it is quite intense.”

Instead, she said that the group tries to do “more showing than telling” and has had its greatest success with photos from protests and commentary on the news cycle from a Jewish perspective, urging Jews to talk to their families about anti-Zionism.

Yonah Lieberman, the communications director for IfNotNow, said the group’s staff “noticed a trend of more and more Jews speaking out for Palestinian rights for the first time and wanted to amplify those sorts of narratives” as well as Palestinian voices. IfNotNow’s most viral post was on May 14, a Twitter thread from writer Marisa Kabas about her experience as an American Jew.

The biggest question for these advocates now is how to turn likes and shares into action and engagement.

“Instagram in particular is not very built to get people off the platform,” said Ben Daniel. “It is something we’re kind of working through, you know, like how do we get people from off of Instagram into the petition or something.”

But both groups said they saw more success than they expected with posts urging people to show up to protests than with purely online engagement such as petitions. “There’s something unsatisfying about clicking on something when you feel so energized,” said Ben Daniel.

Lieberman said that IfNotNow got “thousands of American Jews to hit the streets” as well as log onto organizing calls, whereas before the latest conflict, the group rarely got more than 100 attendees on such calls.

He said he was optimistic that the social media surge would turn into real-world impact. “There are clear political shifts that are following a shift in the discourse,” he said, referencing Rep. Alexandria Ocasio-Cortez and Sen. Bernie Sanders’s recent attempt to block the Biden administration from selling arms to Israel.

Still, what Instagram excels at is amplifying voices and educating, and the subtle shift in narrative produced by such tactics is harder to track. Both IfNotNow and JVP are excited to reach larger audiences, and to see curious newcomers in their comment sections, but it’s hard to say whether the momentum will continue, or will transfer into tangible change.

“I don’t think we know yet, is the truth,” said Ben Daniel.

What about pro-Israel accounts?

Major Zionist pages also grew by large numbers during this period, but unlike their smaller, left-wing compatriots, it was no accident. StandWithUs, for example, mobilized a situation room in which volunteers along with a team of staff members created and constantly updated their response to unfolding events in Gaza and Israel; the IDF has long had a devoted social media team. 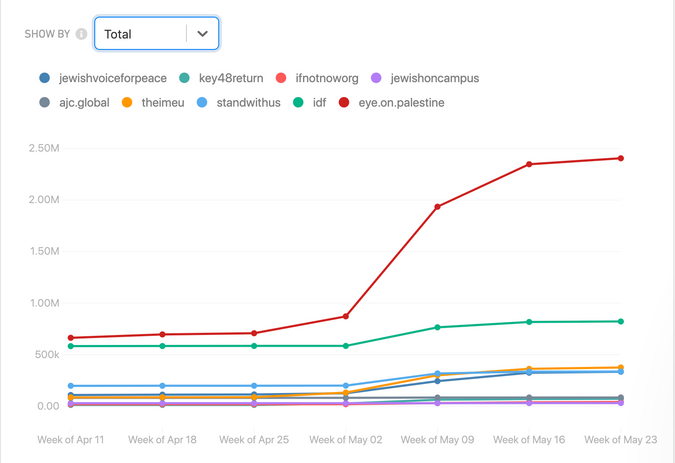 A graph of total followers from mid April to the end of May. Courtesy of Crowdtangle

Roz Rothstein, the co-founder and CEO of StandWithUs, said in a statement that the organization mobilized to intensify its social media during the uptick in violence. Its briefings and workshops included one on social media outreach, in which “countless” attendees were given information to share about the unfolding events as well as instructed which of StandWithUs’s posts to share and hashtags to use in order to help StandWithUs track the reach of its content.

“Metrics skyrocketed almost immediately,” she said. “People want to be engaged; they are troubled by misinformation on social and conventional media platforms.”

It’s notable that some pro-Israel organizations that started off with smaller followings, closer to IfNotNow or JVP’s original numbers, did not see spikes in growth despite also posting about the unfolding events. For example, the American Jewish Committee’s Instagram page started at 80,000 and increased to 84,000 by the end of May, a 5% gain; they posted frequently throughout May. Jewish on Campus, a Zionist page for college students which largely posts about antisemitic incidents on college campuses, grew from 28,200 to 30,100 — about 6.7%.

The early signs of a shift?

The relative gains on Instagram does not, of course, necessarily translate into an actual shift in public opinion, and this analysis looked only at pages tied to specific advocacy groups, not at individual accounts, which can also be highly influential. But the growth in these handful of pro-Palestinian pages comes amid other shifts in the public discourse on the conflict, and could be a particularly significant indicator for young people who use social media as a major source of news and civic engagement.

For these progressive groups, the bump in audience has the potential to change their next phases.

Even tripling their followers does not put IfNotNow and JVP on the same footing as the larger Zionist groups. But their leaders are hoping that it reflects a shifting reality in which American Jews are more engaged in the fight for Palestinian self-determination, and that the trend will continue as the movement grows.

“We have been noticing an increase of comments and shares from the Muslim and Arab community, making it clear that they see Jews as allies in the larger struggle for freedom for all people,” said Lieberman. “Overall, it’s been really powerful to see our message resonating with so many American Jews and allies.”

For Ben Daniel, it’s a bit more complex. “It’s hard that our growth coincided with this very intense period of suffering specifically for Palestinians,” she said. “That’s a contradiction we’re really holding.”