From the time of Torah to TikToks, 10 of Judaism’s best dads

The old, blind Isaac blesses Jacob, his second favorite son, in a hugely consequential instance of fatherly mistaken identity. What dad with twins hasn’t been there from time to time? Courtesy of Wikimedia Commons

“Fiddler on the Roof” is unequivocal: It is the father’s lot to, day and night, scramble for a living, feed a wife and children, say his daily prayers and have the final word at home.

Well, things have changed for most of us since shtetl days — a net positive — but Papas are still a beloved and integral part of Jewish tradition. Some keep that tradition going by sharing their stories, others through undying support for their children and some by just doing better than their own dads by not attempting to sacrifice their sons to God. For Father’s Day, here’s a list of some of our favorite Jewish dads.

The old, blind Isaac blesses Jacob, his second favorite son, in a hugely consequential instance of fatherly mistaken identity. What dad with twins hasn’t been there from time to time? Courtesy of Wikimedia Commons

Isaac’s dad, Abraham, was the father of many nations, but he was also someone Child Protective Services would have kept a file on. (That whole binding your kid thing, while a properly-passed divine test, wouldn’t test well with today’s parental gatekeepers.) With his own kids, Isaac changed things up. He definitely could have been less clear about who his favorite was, but he ended up blessing Jacob anyway. Sure, it was because he thought Jacob was his hairier brother, but in the end it all worked out. Jacob and Esau buried the hatchet — and their dad — and Jacob would go on to have many children and shamelessly favor one of them. L’dor v’dor. 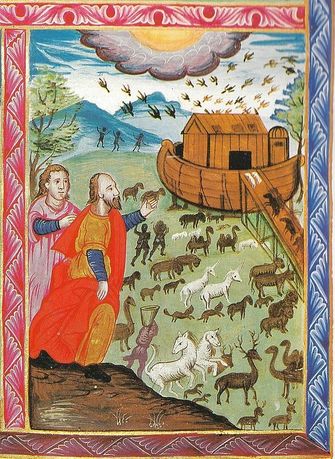 The guy managed to cram two of every animal into a boat, steer it safely through the deluge and never once threaten to turn the boat around. For this feat of never-to-be-rivaled dad strength and navigation, we’ll overlook whatever was going on when his sons saw his nakedness. 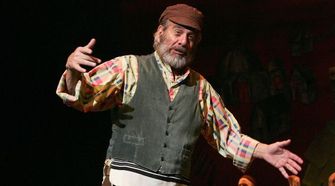 For all his faults, Tevye grows. Image by Getty Images

We have to give the milkman some credit. Yes, he tried to set his daughter up with a much older butcher (a proposed union of fleishig and milchig that felt not quite kosher) and he had his prejudices. But on the other hand, Tevye, for all his faults, changed. Love of his daughters allowed him to make concessions and come to terms with an evolving world. Was he dancing the hora at Chava’s wedding to a Russian Christian? No. But at least in the play he comes to acknowledge their relationship — in his way. Given how some dads still handle intermarriage, that’s not nothing. 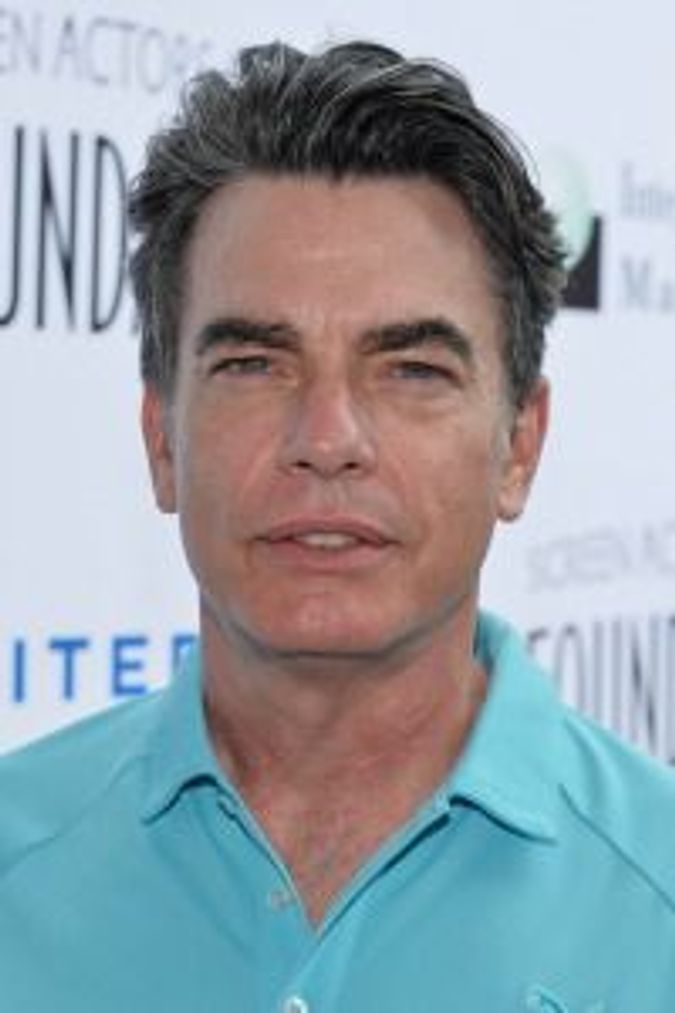 Who among us didn’t want Sandy as our chill dad (who probably vapes)? Image by Getty Images

Sandy from “The O.C.” has dad game so strong that he’s out here adopting troubled kids. This despite his own father leaving the family. With Peter Gallagher’s prodigious eyebrows and a laid-back, but social justice-minded, parenting style befitting Orange County, Sandy is prime cool Jewish tateh and a zaddy who’s earned the right to jazz up his given name, Sanford. 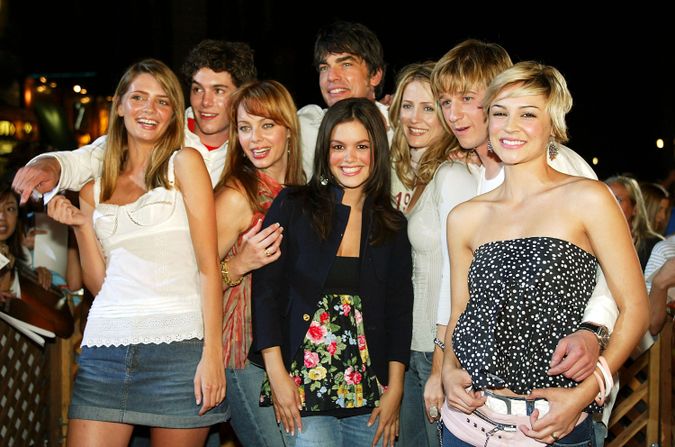 This dad taught us all the meaning of Chrismukkah. By Kevin Winter/Getty Images

It takes a real mensch to not resent your son who blames you for your wife’s affair with your best friend and then makes several blockbusters leading the public to believe you were a distant and neglectful father. Arnold Spielberg supported Steven, fostered his love of storytelling and, using his knowhow as the patenter of the first electronic library system, advised his son on the development of the USC Shoah Foundation’s digital testimony archives. Hopefully Steven’s new project, an autobiographical portrait of his early years, sets the record straight.

Armand and Albert Goldman from “The Birdcage”

It’s not every dad who’ll pretend to be your mom (and straight) so you can impress your fiancée’s conservative parents. Albert and Armand manage it — mostly. That’s true love worthy of a “We Are Family” needle-drop. 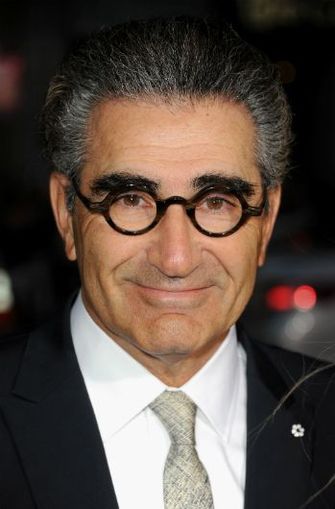 I can’t imagine working with my father on a universally-lauded TV show without betraying any signs of friction or strain on our unconditional love for each other — maybe it’s a Canadian thing. Or maybe Eugene Levy’s just really special. 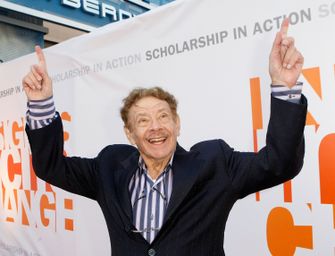 Jerry Stiller never yelled “Serenity now!” at home. But he certainly tried to give his kids a sense of calm. Image by Getty Images

Shortly after Jerry Stiller’s death in 2020, his son, Ben, explained just how different he was from his most famous character, Frank Costanza. Jerry didn’t ever raise his voice. When Ben was homesick at camp, Jerry made the trip up to Maine and spent a couple days with him. Maybe I’m grading him on a curve for not challenging the family to feats of strength near an aluminum pole, but it sounds like he was a lovely person.

The ten favorite snacks in a minute challenge pic.twitter.com/lSYRdgtU0l

Kveller has called Patinkin the embodiment of “Jewish Dad Energy,” and we cannot dispute this fact. Over the course of quarantine, Patinkin’s son Gideon has been capturing his father’s daily recitation of prayers as he feeds his dog his favorite snacks, as well as his endearing ignorance of pop culture. Patinkin’s aura is undeniably Jewish and unequivocally dad-ish. He’s one of our best. 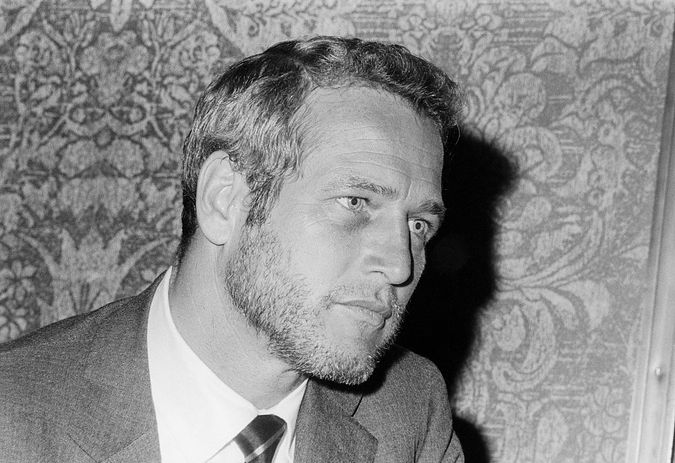 A real picture of my father, which is definitely not a picture of Paul Newman. Photo by Getty/Grisar Family Photo Album

This counts as my Father’s Day gift, by the way.

From the time of Torah to TikToks, 10 of Judaism’s best dads