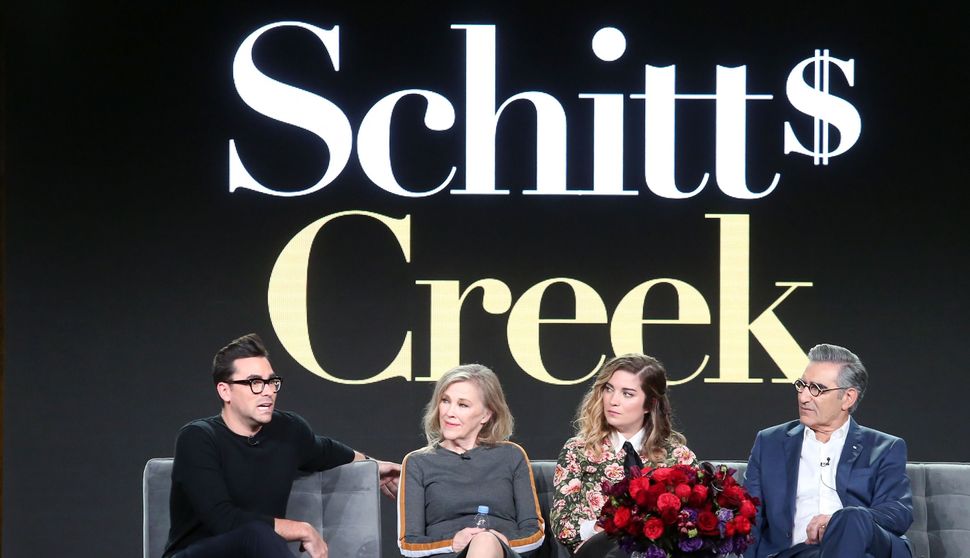 Most Emmys nights, the stars are out in force. In 2020, they stayed in, and didn’t so much take home awards as have them delivered to their doorstep.

Host Jimmy Kimmel worked the room at an empty Staples Center, bare but for a skeleton camera crew and the occasional socially-distanced celebrity cameo. Yet for the first hour of the program, it felt like Old Home Week.

The night’s biggest winner was “Schitt’s Creek,” the Canadian sleeper hit that was a true-Jew family affair. Father and son Eugene and Daniel Levy, together with their co-stars and crew, collected their statuettes from people in tuxedo hazmat suits. Racking up seven Emmys Sunday — and adding to two creative Emmys won last week — the show about a Jewish family brought low by financial malfeasance and made to relocate to a backwater town, set a record. After receiving a historic 15 nominations for a comedy series, the nine wins made the series the comedy with the most wins for a single season in the history of the Emmys.

But while “Schitt’s Creek” was the most conspicuous winner of the night, its trophies were far from the only Jewish moments of the evening. Allow us to break down the rest.

Daniel Levy, who co-created “Schitt’s Creek” with his father, Eugene, won awards for Best Writing for a Comedy Series, Best Direction with his college friend Andrew Cividino, Supporting Actor and Outstanding Comedy Series, an honor he shared with his dad.

Eugene Levy, on winning Outstanding Actor in a Comedy Series for his rare straight man role, said simply, “You see, I told you I was good.”

The elder Levy also credited his son with transforming their silly idea for a sitcom into a “celebration of inclusivity, a castigation of homophobia and a declaration of the power of love.” Both men urged viewers to vote to bring more of that energy to the world.

“Watchmen,” created by Damon Lindelof, from the graphic novel by Alan Moore and Dave Gibbons, won for Best Limited Series and Outstanding Writing for a Limited Series with his co-writer Cord Jefferson.

Lindelof dedicated his win for limited series to the victims and survivors of the 1921 Tulsa Massacre, the inciting incident for his vision of “Watchmen,” and expressed deep gratitude to his Black collaborators for helping him tell a story that, he said, wasn’t rightly his to tell.

“History is mystery,” Lindelof said, referring to his show’s prescient revisionist notion of an American police state, but urged those listening to heed the many missing “puzzle pieces” in our accepted narratives and to name a historical wrong “before we can repair it.” Very tikkun olam.

Also Jewish were his digestive issues; he ended his speech by saying, “I’m gonna throw up.”

“Unorthodox” did not see a win for lead actress Shira Haas, but the show about a young Satmar bride who goes off the derech won for Best Director of a Limited Series for its director, Maria Schrader.

“It’s been so incredible already these past few months — when we’ve all been in the lockdown — and seeing our show traveling the world,” Schrader said when accepting her award. “And then being nominated for the Emmys already felt like a coronation. But now, this? I’m speechless.”

Also short of words was Julia Garner of Netflix’s “Ozark,” who won her second consecutive Emmy for Supporting Actress in a Drama for her performance in the role of Ruth. To her fellow nominees, who included Meryl Streep and Laura Linney, Garner said “You are the reason why I’m acting in the first place.”

Kimmel began his broadcast by taking some potshots at Jewish elder statesman, congratulating Norman Lear on becoming the oldest ever Emmy winner last week at the age of 98.

“When Norman was a boy his dream was to not get kicked to death by a horse,” Kimmel quipped, adding, “The only thing I’ll be producing when I’m 98 is phlegm.”

The host also called Jeffrey Katzenberg’s short-form video service Quibi the “dumbest thing to ever cost a billion dollars” (despite its Emmy wins earlier in the week) and had us on tenterhooks to see if “Alan Arkin knows how to use a webcam.”

To the last point, Arkin, who was nominated for his role in “The Kominsky Method,” had a headshot in lieu of a live feed.

From the side of a country road, David Letterman, wearing a tuxedo he said he last wore when he hosted the Emmys in 1986, pulled out some old jokes from that gig, one of which was “Neil Diamond is nominated today. Where’d you get that tan? Chernobyl?”

In pre-recorded bits, Abbi and Ilana of “Broad City” said how much they were pulling for “The Good Place” for Best Comedy Series, while Shaq said he was partial to “Curb Your Enthusiasm” (citing his “Emmy-worthy” performance on the show in 2001). One weird development was learning that Houston Texans defensive end J.J. Watt is apparently a huge fan of “The Marvelous Mrs. Maisel.”

Sadly, Watts’ favorite didn’t win this year, though Alex Borstein, who won for her role as Susie Myerson in 2018 and 2019, made the most of the quarantined proceedings; she briefly appeared on screen swigging wine in a blonde wig and nightie beside a Yorkie.

Other Jewish Odds and Ends

Regina King, who won Best Actress in a Limited Series for “Watchmen” had her Hebrew tattoo visible when accepting her award. The letters are “hey, hey, ayin,” one of [72 three-letter combinations in Exodus] (https://www.kveller.com/does-regina-king-have-a-hebrew-tattoo/) that are the names of God, per Kveller. King has said that they are Aramaic for “unconditional love,” which doesn’t appear to be the case.

King ended her speech by saying “Rest in power, RBG.”

The “In Memoriam” section of the evening began with a short tribute, by Kimmel, to the late Supreme Court justice who died on September 18.

In a moving speech about his grandmother, diversity and the evolving African-American experience, Perry also gave thanks to Jewish Endeavor CEO Ari Emanuel, the likely inspiration for Ari Gold from “Entourage” and the brother of Rahm Emanuel, former mayor of Chicago.

Zendaya won Best Actress in a Drama, the youngest actor ever to do so at 24. She received the statue for her role as Rue in “Euphoria,” based on an Israeli series and produced by Drake. In her acceptance speech, Zendaya thanked show creator Sam Levinson, who she called “her family.”

When the evening was over, $2.8 million in charity was raised for No Kid Hungry. Tzedakah fueled the evening, along with the calls for social justice and voting, put forward most humorously by Tracee Ellis Ross, who demanded her gift bag contain a U.S. census form and voter information.

But those who stayed to the bitter end of the broadcast, which celebrated diversity as well as our essential workers, heard Jews get the last word — literally.

In a wink to electoral participation and the nickname of long-standing executive producer of “The Howard Stern Show,” Gary Dell’Abate, Kimmel wrapped his Emmys 2020 tenure by saying, “Please vote and Baba Booey.”

We couldn’t have said it better ourselves.