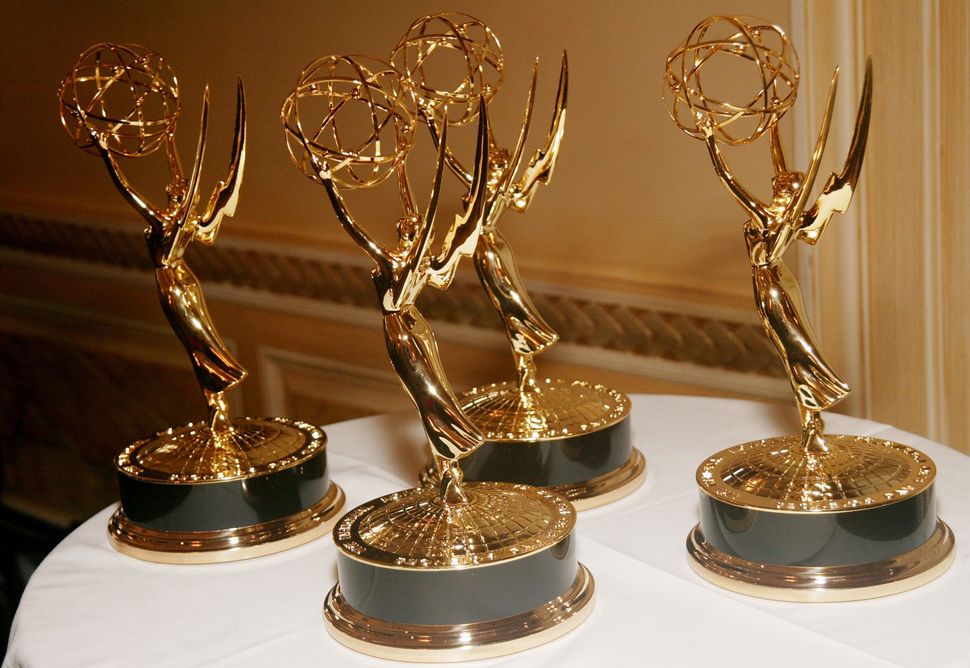 With 26 nominations, HBO’s “Watchmen,” a prescient superhero meditation on police violence and race in America, leads the field for the 2020 Emmys. It’s a mixed field, with a lot of recognition for actors of color and something at least approaching parity for male and female directors – though the writing categories are woefully lopsided. But, at least with “Game of Thrones” out of contention, this year there’s more space for less-disappointing fare to get its day. There’s a lot of good here, and a lot of it’s Jewish.

Mike Schur’s “The Good Place,” is up for best comedy for its final season. It’s joined by the stodgy old men comedy of “Curb Your Enthusiasm” (whose 10th season was at points painful to watch) and “The Kominsky Method.” Comedy is the Jewiest category by far, with the comedian origin story “The Marvelous Mrs. Maisel” and Dan Levy’s swan song season of “Schitt’s Creek” are also nominated alongside Liz Feldman’s “Dead to Me.” Even the vampire romp “What We Do In The Shadows” is Jewish by association, based as it is on a Taika Waititi film.

Jon Favreau’s “The Mandalorian,” which gave us Baby Yoda in simpler, happier times is up for Best Drama with “Ozark,” featuring Supporting Actress nominee Julia Garner, who won the award last year. “Stranger Things,” which continues to dine out on Spielbergian aesthetics is also nominated.

Damon Lindeloff’s “Watchmen,” which confirmed the graphic novel character of Dr. Manhattan’s partly Jewish origins is up for Best Limited series and Yahya Abdul-Mateen II, who plays the blue (and sometimes Black) superhero is nominated for Supporting Actor.

The Best Actress in a comedy category pits Rachel Brosnahan’s Midge Maisel against Tracee Ellis Ross’ Rainbow Johnson on “Black-ish” and Catherine O’Hara’s melodramatic Moira Rose on “Schitt’s Creek.” Their male counterparts include Michael Douglas’ over-the-hill actor in the “Kominsky Method” and Eugene Levy’s Johnny Rose. Levy has much kvell over, as his son, Dan, the creator of “Schitt’s Creek” is up for Best Writing for a Comedy Series, Best Supporting Actor in a Comedy Series and Best Director for the show’s finale. (Annie Murphy, who played the elder Levy’s daughter on TV, is a contender for Supporting Actress.)

Women of color like Regina King and Octavia Spencer dominate the Best Actress in a Limited Series category, but Shira Haas is also in contention for her role as Esty Shapiro in “Unorthodox.”

Giving us trouble is the Guest Actress in a Comedy category, which has Maya Rudolph (nominated twice, for her turn as the Judge of the Universe on “The Good Place” and her cameos on “Saturday Night Live”) against Bette Midler’s unforgettable turn as campaign manager Hadassah Gold in “The Politician.”Rather than pick a favorite, we think the award should go to Angela Bassett for her part in “A Black Lady Sketch Show.”

“Beastie Boys Story,” about the Jewish rap-punk act from New York is nominated for Documentary alongside the Facebook/Cambridge Analytica expose “The Great Hack.” Meanwhile, in the Animated Program category “Big Mouth,” “Bob’s Burgers” and the last episodes of “BoJack Horseman” are in stiff competition.

Three episodes of “Watchmen” are up for Best Direction for a Limited Series. Joining them are Lenny Abrahamson for the fifth episode of “Normal People,” based on Sally Rooney’s novel. But the award will likely go to “Little Fires Everywhere” director Lynn Shelton, who died suddenly of an undiagnosed blood disorder in May.

Amy Sherman-Palladino and her husband Daniel Palladino are vying for Directing for a Comedy Series with Matt Shakman, who, in a victory for the Yidden, is nominated for directing an episode of “The Great,” a show about Catherine the Great, who would one day establish the Pale of Settlement. (We control the narrative now, Catherine.)

The awards are scheduled for September 20 in a virtual ceremony. With the pandemic keeping so many at home, the ratings may get a much-needed boost following last year’s dismal numbers.