Thank You, Tiffany Haddish, For Reminding Us How Precious Our Heritage Is 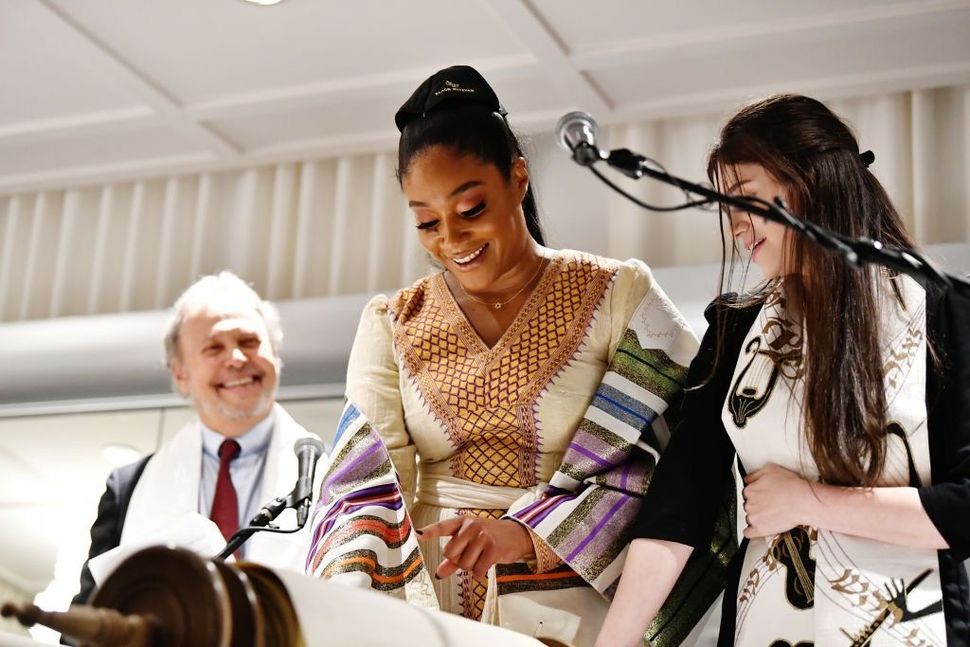 Something of great significance for the Jewish community happened last week. We must recognize and embrace it as such. Some folks — myself included — will have to get out, if just for the moment, of the lane we have long been traveling in. And we should be grateful for that opportunity.

I refer not to the decision by the Italian town of Schio to refuse to install 14 Stolpersteine — stumbling stones — the small brass markers that are placed in front of the homes from which Holocaust victims were deported; the town refused because it would be “divisive.” The mayor described the attempt at commemoration as “political exploitation.” One has to ask: Divisive to whom? Exploitative of whom?”

The Italian town of #Schio rejected a proposal to honor its citizens who perished in the #Holocaust with #Stolpersteine. https://t.co/KQGWnVJqOg

Nor do I speak of Chief Rabbi Mirvis’ decision to call on British Jews not to vote for Jeremy Corbyn because of the antisemitic danger he poses.

Nor do I speak of the gravestones defaced in France, the decision of the Belgian town of Alast to forgo its listing as a UNESCO cultural site because that would mean take the overtly antisemitic floats out of its carnival parade, or of the ultimatum issued by the McGill student government to one of its members to either give up or trip to Israel or resign from her position.

Sadly, I could go on and on — and that’s just from last week — but you get my drift. Each of these events is deeply disturbing. They are part of a trend that leaves many of us pessimistically pondering, in the words of President Jed Bartlett, “What’s next?”

But for me, none of these events were the headliner Jewish event of last week. The event that made me sit up and take notice was Tiffany Haddish’s bat mitzvah.

Haddish is a brilliant, raunchy comedian. A black Jewish woman, her breakout role was the 2017 comedy “Girl’s Trip,” and she’s been everywhere in the meantime. She’s currently making a film with Billy Crystal, she has hosted Saturday Night Live, and she just appeared in a Netflix comedy special called “Black Mitzvah” which she also wrote. (Spoiler alert: it’s very funny and rather off color.)

Haddish was 27 when she first met her father, who had abandoned the family before Haddish was born. But she had grown up knowing he was an Eritrean Jew, and thirteen years after meeting him, she decided it was time for a bat mitzvah — or, as Haddish would put it, a Black Mitzvah.

In an appearance on Jimmy Fallon’s show, Haddish spoke with genuine joy and excitement about becoming a bat mitzvah, and “how drawn to” being Jewish she is. She spoke about honoring her “ancestors and everything they have done for us.”

Everyone involved in preparing her for this event, particularly Rabbi Susan Silverman and her daughter Aliza, spoke about Haddish’s joy, enthusiasm, and pride in embracing this heritage. She even learned enough Hebrew to read from the Torah.

As opposed to so many Jewish kids today, for Haddish, her bat mitzvah was no burden. Also unlike so many kids, she certainly did not do it for the presents (though the Jewish star from Barbra Streisand was pretty nice).

In the Dvar Torah she gave at her ceremony, Haddish used Jacob’s ladder as an analogy to her own struggle with homelessness, foster homes, caring for her younger siblings, parental abandonment, and so much more; she had climbed the ladder out.

So why do I think this so important? Because at a time when our focus is on the “oy” of Jewish life and not the “joy,” along comes a rising star who also happens to be funny, smart, and a person of color, and says, “I am a member of this tribe. I want to embrace it, celebrate it, and proclaim it to the world.”

“She wants to be connected to Judaism, to tradition, in everything she does,” Silverman observed. “You can see the relief, and joy, and power in that for her.”

For too many Jews today, our tradition is a black hole of ignorance, a source of angst, and even, sadly, a source of shame. Tiffany Haddish is the polar opposite of that.

And it’s not because she’s ignorant of the fact that membership in this ancient peoplehood comes with certain liabilities. She also seems wise to the fact that the Jewish world has not always been kind or welcoming to Jews who don’t look like the white Ashkenazi prototype. Too often, Jews of color are seen as “other,” “unique,” and even “interesting,” but not totally one of “us.”

Nonetheless, she is beyond delighted to be part of this community. She is joyous. She is celebrating. And she is doing so at a time when so many of us go to a dark place when someone mentions being Jewish.

Thank you, Tiffany Haddish, for reminding so many Jews what a precious legacy we share. Thank you for seeing the darchei noam, the pleasant ways of our heritage, and wanting to proclaim that to the world.

I, for one, who have spent so much of my time and energy these past years — if not my entire profession — studying how Jews have been persecuted and hated and teaching what is done to Jews and not what Jews do, welcome her with a heart overflowing with gratitude for reminding us what we have had all along.

And since gratitude is a lynchpin of Jewish tradition, as I wrote in these pages a few weeks ago,  modim ananchu lach:  We thank you — so very much.

Deborah E. Lipstadt is Dorot Professor of Holocaust History at Emory University and the author of ANTISEMITISM HERE AND NOW. She can be found on Twitter @DeborahLipstadt

Thank You, Tiffany Haddish, For Reminding Us How Precious Our Heritage Is