‘Oklahoma!’ Is The Go-To Score For HBO’s ‘Watchmen’ 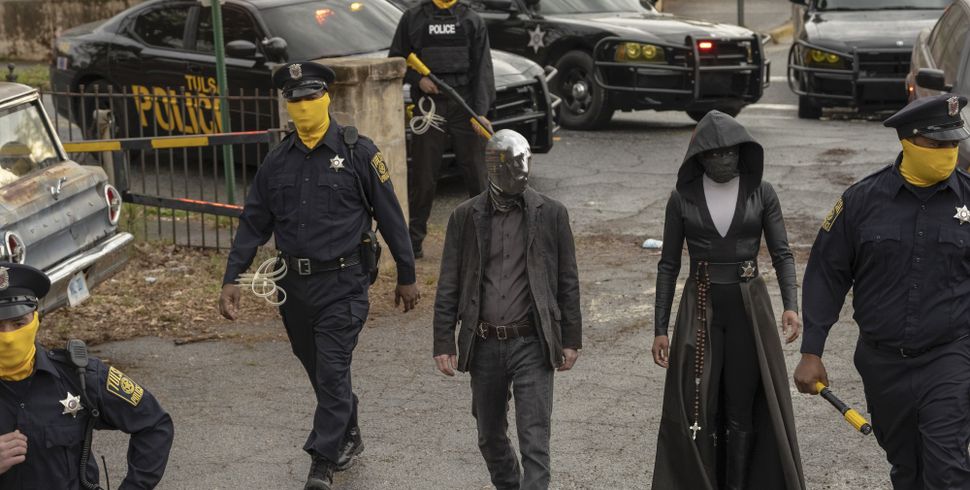 The new HBO series “Watchmen” is a puzzling property from the get-go. While it shares the universe with Alan Moore and Dave Gibbons’s 1986 graphic novel of the same name, it would appear to not need its spandex trappings. The show’s ideas, as presented in the pilot episode, are sturdy enough to stand on their own. Some of these ideas — involving prejudice and a racially-charged American South — are coming from an unexpected, if familiar place.

While Moore and Gibbons were interested in skewering Reaganism (while pushing a universe where Nixon remained president for life), this new “Watchmen,” created by Damon Lindelof of “Lost,” is mainly concerned with race, presenting an alternate universe where a band of white supremacists, the Seventh Kavalry, have earned a reputation as cop killers, forcing the entire police corps to conceal their identities under yellow balaclavas. How the show will all connect to Moore and Gibbons’s source material beyond some Easter eggs and the iconic Rorschach-blot stockings worn by the Kavalry, remains to be seen. But viewers who tuned into the premiere already heard stirrings of another influence from two very different creative partners.

Early on, we see an all-black company of the show performing the title number in a local theater to a crowd that includes the city’s police chief, Judd Crawford (Don Johnson). We learn later, in a dinner scene with Crawford and his friend and colleague Angela (Regina King) that Judd, despite his name, was cast as Curly in a high school production of the musical and sings through the bulk of “People Will Say We’re in Love” as he circles the table. In a jarring final scene, “Pore Jud is Daid” plays out in a way that is, well, pat. (The title of the episode is taken from a lyric in the song, in which cowboy Curly invites cowhand Jud to imagine his funeral.)

While mainstays of the Great American songbook, Rodgers and Hammerstein’s work has been appearing in ever more curious places in recent years, occasionally winning the duo quite the posthumous payday. In March it was reported that R&H’s estates were taking home 90% of the songwriting royalties for Ariana Grande’s single “7 Rings,” which uses the melody of “My Favorite Things” from “The Sound of Music.” A couple of years before Grande’s track, “Edelweiss,” another song from that musical, was introduced as the title theme for Amazon’s “The Man in the High Castle.” (Its use in that series, about the Axis taking control of America, left some raising their eyebrows when it was played at the White House as the press corps awaited the release of the Mueller report.)

Naturally, songs from “Oklahoma!” have also made appearances in pop culture – “Surrey with the Fringe on Top” is what Billy Crystal’s Harry Burns serenades Meg Ryan’s Sally Albright to in “When Harry Met Sally” — but, apart from the recent Tony-winning revival of the show, this may be the libretto’s darkest use to date.

Rodgers and Hammerstein would likely welcome the use of their songs as homage and wouldn’t say no to the money either. (Shortly before his death, Rodgers allowed “I’m Gonna Wash that Man Right out of My Hair” from “South Pacific” to be used in a Clairol ad.) It’s pretty clear given the pair’s track record as progressives that they would approve of their songs being used in a show like “Watchmen.”

While it’s too early to say what the ultimate message of the series will be, “Watchmen” certainly looks to be a condemnation of the sort of bigotry and white nationalism that Rodgers and Hammerstein’s work so often railed against in shows like “South Pacific,” “The Sound of Music” and “The King and I.” As for “Oklahoma!,” Daniel Fish’s recent revival highlighted the otherist themes that always lurked under the dream ballets and the hummable score.

Watching the pilot, “Oklahoma!” seems to make more sense for the story Lindelof is trying to tell than Moore and Gibbons’s book on Cold War nuclear hysteria and branding opportunities for public supermen.

Then again, it’s still early days for the show, which reportedly has grander ambitions than a terrorist cell in Tulsa. Perhaps we’ll see later episodes in Austria or Polynesia, maybe giving the rest of Rodgers and Hammerstein’s oeuvre a chance to shine.

‘Oklahoma!’ Is The Go-To Score For HBO’s ‘Watchmen’