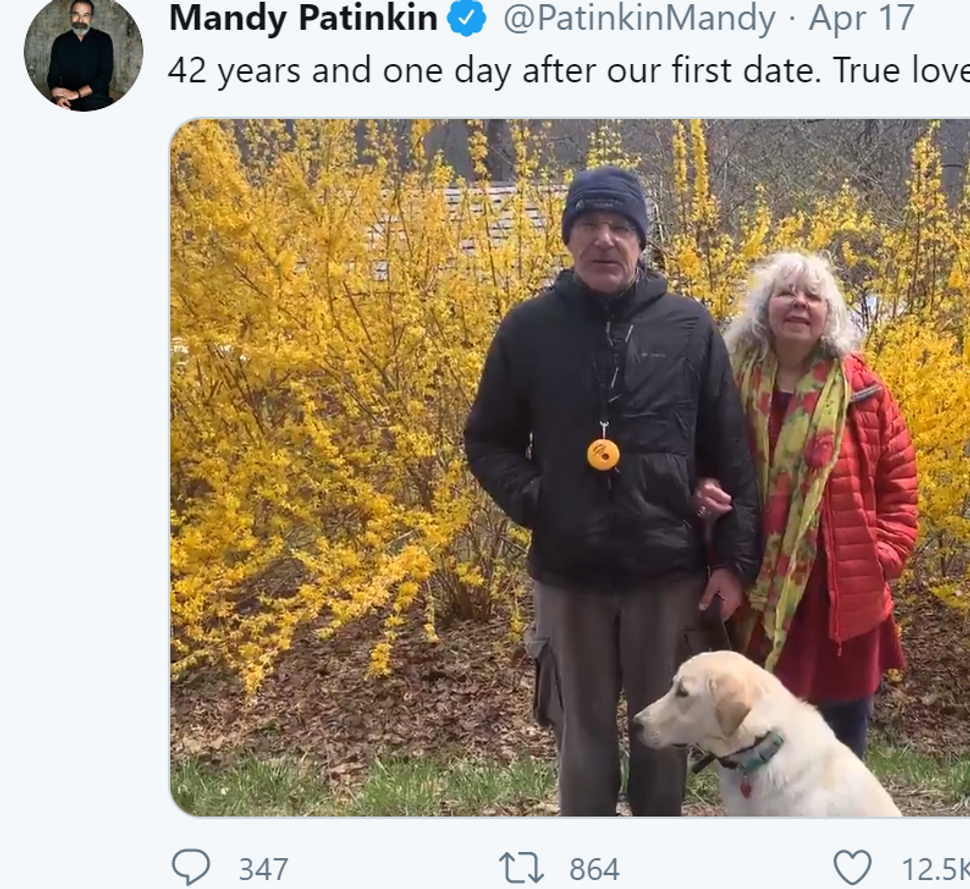 A child’s duty to his or her parents is a central tenet of Jewish tradition. If you are the son of stage and screen star Mandy Patinkin and writer, actress and activist Kathryn Grody and you are social-distancing with them, your duty is to embarrass them via Twitter takeover.

33-year-old actor Gideon Grody-Patinkin, in quarantine with his mom and dad at their home in Arizona, has wrested control of his father’s blue check-marked account away from his PR gatekeepers. The results of the younger Patinkin’s social media savvy are striking, tender and, compellingly, not without the arcs and motifs of drama. Let’s take a look.

Grody-Patinkin’s influence on his father’s page first became apparent on April 17, 2020, 42 years and a day after his parents’ first date. In the clip, Grody-Patinkin interviews his folks and establishes their dynamic. We learn that Grody and Patinkin’s anniversary involved a “shit show” of a fight before tears were shed and turkey bolognese was made. The couple’s yellow lab, Becky — our fourth lead after Grody-Patinkin on our imagined call sheet — was, per Patinkin, “disappointed” by the conflict. Here we have our main players, conflict and the power balances that ferry us through the rest of these tweets.

42 years and one day after our first date. True love. pic.twitter.com/asn4Fs6lc0

This clip, with its loving open argument, prompted Kvellerto cite Patinkin as the embodiment of “Jewish Dad Energy,” something the veteran actor has in spades.

In an April 20 tweet, Patinkin bounds around the house imitating Becky’s barks as he peers out the windows, a dish towel hanging from his shoulder. It is an actor’s exercise in empathy and, truly, a commentary on our inner animal that — cooped up in quarantine — howls at the outside world in a desperate yearning to be free and touch one’s face.

Then the plot moves in an unexpected direction, accumulating a Stoppardian fixation with language. Grody-Patinkin quizzes his parents on popular text acronyms. Patinkin identifies LMAO as “Let me alone, oaf.” The couple are stumped by “IRL,” but readily identify “OMFG” in unison.

Words and their meaning continue to feature as the drama marches forward. In a two-part tweet, Patinkin assigns an adjective describing Grody’s radiance and wit for each letter of the alphabet. Sadly, Grody cannot match his facility with the ABCs; on May 7, she struggles to recall the words to “‘A’ You’re Adorable.”

These posts also add up to something of a memory play as Patinkin, asked to describe the 1960s, conjures a scene from the summer of 1968 on Chicago’s Wacker Drive, where, clad in a white dicky, he debuted the jingle in the first-ever Kellogg’s Frosted Mini-Wheats commercials. In this moment, he resembles the wistful James Tyrone of “Long Day’s Journey into Night,” musing on the lost days of his youth as a performer. For her part, Grody recalls that while Patinkin was advertising a breakfast cereal, she was in the streets protesting the Democratic National Convention.

Intergenerational differences are also a theme in Grody-Patinkin tweets. Patinkin asks for help posting a video to Twitter, having relied on “people” to do it for him in the past. His son assists him, but not before his father stands confounded by his discovery of GIFs, which, he believes, might stand for “Great Image Frames.”

But for all their commonalities, these Twitter digressions are marked by their jarring tonal changes, making dramaturgy something of a challenge. Take, for instance, a May 4 post where Grody clobbers Patinkin, who has a hotdog dangling from his nose, with a wine bottle, then decorates his face with an egg, shaving cream and confetti. This has the trappings of farce, but then there’s a quick pivot to a plea for the International Rescue Committee. Absurdist luminaries like Samuel Becket and Eugene Ionesco surely mined slapstick while promoting this sort of commentary, but they were never so overt as to have a clear cut divide between form and message. (This kind of direct address and appeal feels more at home with Brecht, but even then, not quite.)

Trying to get attention. pic.twitter.com/NFftI693qb

The influences in Grody-Patinkin’s vignettes are wide-ranging. Most recently, in an Edward Albee-esque development, Grody and Patinkin have commenced games of wit. In a properly Hebraic twist, the duo are not self-medicating with alcohol like the older couple in “Who’s Afraid of Virginia Woolf,” but rather serenely noshing on Manischewitz matzo as Grody-Patinkin asks them what they think TikTok and Pizza Rat are. They don’t know, but their answers reveal their consistency of character.

If one takes note of these irregularly posted updates from the Patinkin-Grody homestead, it’s clear even in the most mundane of interactions that Grody’s social justice streak is long — she misidentifies TikTok as an app censored by the Chinese government. Patinkin, a consummate entertainer, believes TikTok to be a watch-fixing app and riffs on how it works. The two complement each other, sparking laughter and informing one another’s social consciousness.

In short, while entertaining, resembling features of the great dramatists and adhering to at least the Aristotelian unity of place, these tweets thus far fail to hold together as a work of theater. The reason is quite simple: there’s no real sense of the conflict promised in the first tweet, which, itself, happened off-screen. Rather, Grody-Patinkin has shown the world the Jewish parents we all wish we had — or ones who closely resemble our own. They may not know from dabbing or “Gangnam Style,” but they demonstrate what it takes to survive 40-plus years together.

Whether he meant to or not, their son did what the Torah commands and honored his parents.