At Zabar’s, mastering the art of the schmooze 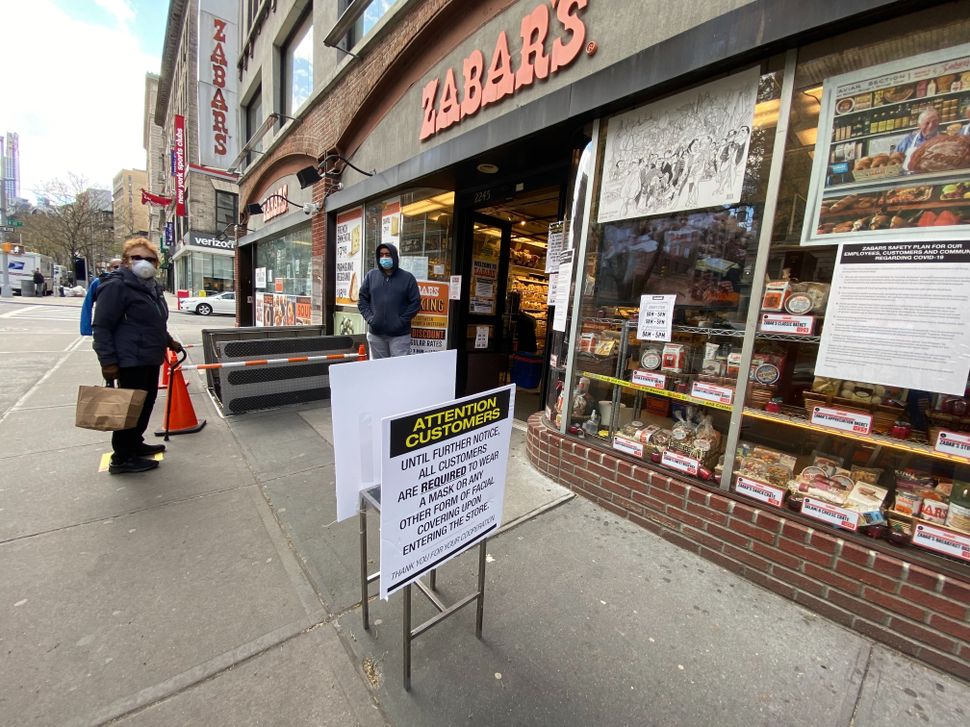 I looked up at the clock on the far rear wall in my section. It was 4 o’clock and he hadn’t shown up yet. I worried a little and continued waiting on customers. He completely left my mind for a while and then, suddenly he was there, in the front of the store, reaching up to the shelves where he deposits some of his stuff when he comes to work.

Once he was settled, he looked around to see what was happening and penetrate store mode. His eyes passed the fish counter and met mine. He walked over to say hello. I wasn’t waiting on a customer at the time, so we started to schmooze. We could schmooze for maybe 10 minutes or so, but our time together could end quite suddenly if a customer showed up. It is an unwritten rule: THE CUSTOMER COMES FIRST.

He tasted some Nova which he took from a container of trimmings that were sitting on the slicing board. “Delicious,” he said.

“It’s been kind of quiet for a while; guess it’s because of the rain” I said.

Something was happening that caught his attention and he abruptly left the counter, and walked toward the front of the store. A customer appeared. I got to work. This schmooze had ended.

It has been said that the word “schmooze” is derived from the Yiddish shmuesn and that word comers from shemuah, a Hebrew word meaning “rumor.” The earliest recorded usage is in 1897, the same year the Forward was founded and has come to mean shooting the breeze or passing the time by chatting.

But we didn’t always schmooze at Zabar’s. Back when he interviewed me for the job, some 26 years ago, I called him Mr. Zabar. I continued to call him that for maybe 20 years or so until one day I became surprisingly aware that every employee in the store, from the controller and the general manager down to the newest clerk in the meat department, called him “Saul.” 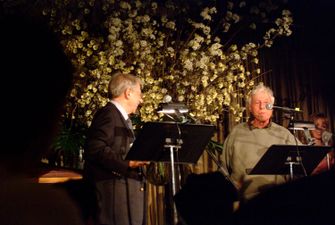 Brothers In Arms: Stanley and Saul Zabar at a Symphony Space event in 2005. By Getty Images

For a while, I kind of liked that I was the only one in the store that called him Mr. Zabar. Workers should show respect. Somehow it made me feel special that I was doing something that no one else in the store was doing. He never asked me to call him Saul and so he remained Mr. Zabar to me.

One day, about two or three years ago, he appeared behind the lox counter to check on the whitefish and he spoke to me. He told me that the Nova was delicious.

“The Scottish is also delicious, SAUL.”

I was stunned. I had done it. I had actually called him Saul, for the first time in 20 years, like everyone else in the store did. I had broken the “Mr. Zabar” barrier, and no one even noticed.

Now that we’re both over 90, it feels warm and comfortable to share our over-90 stories. We talk about how age affects our daily lives and often we acknowledge to one another that to move, to walk, to engage, are the cardinal rules for survival.

As time passed, the schmoozing broadened; we recommended movies to each other and occasionally discuss politics. Somewhere along the way, I think we started to like each other more. Recognizing how much we have in common created a kind of bond as well as a proper climate for schmoozing. If Saul has something to say to me, or I to him, we won’t wait ‘till Thursday, we’ll pick up the phone and call.

Also, I began to admire him. Here is this man who, at age 92, comes to work almost 365 days a year. Weather permitting, he will walk to work from his condo in the West 90s; weather not permitting, a driver will pick him up and take him to the store. He puts aside all the physical, mental and emotional difficulties that plague all nonagenarians, and he does his job. He does not play second fiddle to the computer like many of the rest of us.

In any given week he can be seen walking around the store dressed in his usual attire — a polo or sweatshirt and khaki pants. He visits every department in the store to stay current with the operation there. On Tuesday mornings, with the aid of Kenny, manager of the coffee department, they brew and taste coffee samples to make sure that the coffee Zabar’s buys is up to the quality that is required. He looks over selected bills at his desk in his office on the mezzanine floor. He tastes all the salads that go on the shelves. Although he no longer goes to the smokehouse daily, as he used to, he tastes the fish that arrives from the smokehouse regularly. If his high standards are not met, back to the smokehouse goes the fish.

The fish counter is his true love — probably because that’s where it all started years ago when he terminated his pre-med studies at the University of Kansas to help run the family business after his father died. He wanted to become a doctor of medicine but his first allegiance was to his family. Perhaps that part of him that was his father had taken over, and so he never left the business. He took Zabar’s from a few small appetizing stores in New York to the current day Zabar’s, which is one of, if not the premier place in the world to buy smoked fish. His guiding principle is that “Zabar’s on the label means quality on the table,” a phrase that was coined by Sam Cohen, another schmoozer, who worked the No. 1 position behind the lox counter for 46 years until he retired. Saul will never retire. Zabar’s is in his blood and he will show up at the store daily until he no longer can. Working is as important to him as breathing.

Sam Cohen would schmooze with all the old Jewish ladies who would come to Zabar’s and have him slice their lox.

But Sam was not only a schmoozer; he was a “Kibitzer” as well, meaning someone who would offer unsolicited opinions or advice. Sam would kibitz with celebrities, neighborhood regulars and tourists alike. He educated them, not only to the world of smoked fish but about life itself. He was a teacher, an artist and also a tummler — an entertainer of sorts, one who makes things happen. His joyful humor and love of people helped to create the spirit of Zabar’s that continues to this day.

It has been said of Sam that he sliced very thin, but the truth is that he did not. He had his own way of slicing and it wasn’t thin. On occasion, a customer would ask him to slice thinner.

“Get another man,” he’d say. To Sam there was only one way to slice lox and that was his way — end of story.

Another schmoozer of note was Harold Horowytz, manager of the meat counter from 1972 to 1992. I saw him as very gruff and opinionated. He would sit with Saul up in his office for long periods at a time discussing meat and other store matters. He and Saul were very close. He retired at age 86 because of bad knees and died a year later. I think Saul loved him and misses him a lot. His voice can still be heard on the store loudspeaker talking about the many kinds of knishes Zabar’s offers the public.

My experiences with Harold were rare since we worked in different departments. On one occasion, however, he appeared behind the lox counter and placed some foie gras in the display section in front of me.

“Prick, make sure you sell the foie gras,” he said.

I didn’t like being referred too that way and when I told some of my buddies in the store who knew him better than I did, they said he always talked that way to everyone and it was not personal, just his way. Somehow I couldn’t let go of that remark and I never spoke to Harold again. Now, when he pops into my mind, I find fault with how I handled the “Foie Gras” episode and our subsequent non-relationship. Perhaps, had I not been so smug in our encounter, I could have gotten to know him as his friends did, appreciating his “nice guy” qualities and allowing for his foul mouth.

Yes, schmoozing is still alive and running well at Zabar’s, with kibitzing a close second and tummling coming around the far turn.

The Forward’s lox columnist Len Berk has worked behind the lox counter at Zabar’s for 26 years. You can find him there on Thursdays.

At Zabar’s, mastering the art of the schmooze