In Surfside, a Jewish tragedy receives a Jewish response 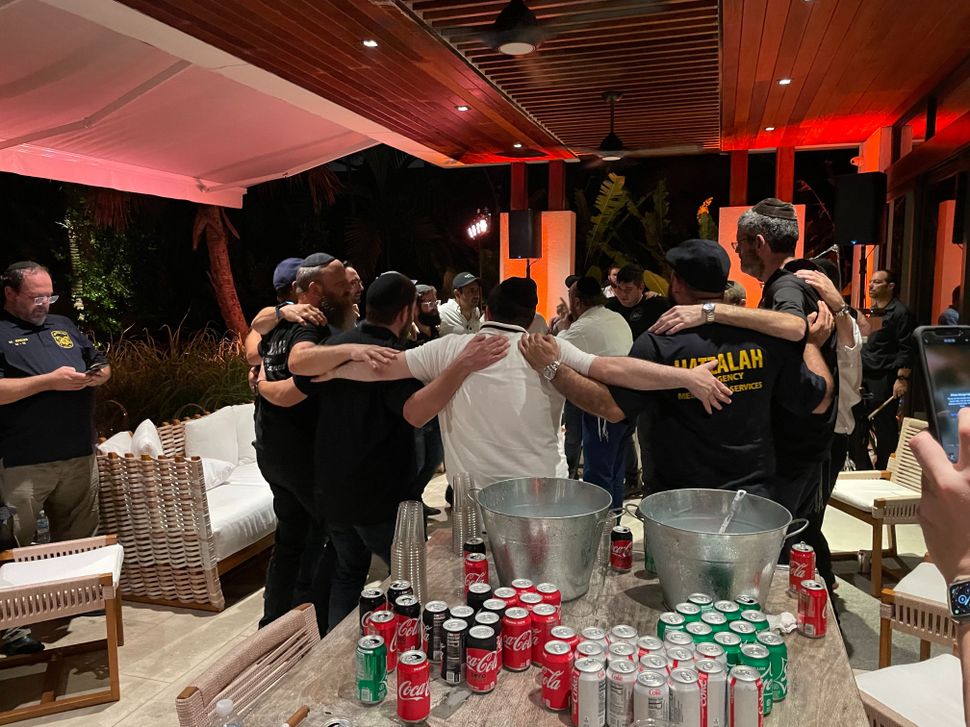 The group surrounded Hasidic singer Yehudah Green during an upbeat rendition of “Mashiach!” By Louis Keene

The volunteers trudged to the mansion’s front door, their heads covered, most of them wearing the same navy T-shirts they had been wearing all week, their uniform.

It was about four hours shy of eight full days since the men of Hatzalah of South Florida responded to a call about a building in Surfside that had collapsed. When the Orthodox emergency-response volunteers received word from their dispatcher, they did not know how big the building was, or how many people had been inside. They did not know that they were headed toward one of the deadliest collapses in the history of the country. All they knew was that they were on their way.

Since that call, Hatzalah volunteers had been a steady presence at the scene of the disaster, helping with a search and rescue operation that had not yielded a survivor since dawn of the first day. Many of the men said they had not slept more than a few hours over the entire week. Others said they had hardly eaten.

On Thursday night, they were heading into the waterfront mansion mere blocks from Champlain Towers South, the collapsed building, to take their first real break.

What had been prepared for them — and for other Jewish volunteers who had been working around the clock at the Champlain South Towers disaster site — was a kumsitz, a kind of Jewish kickback, with live music and a lavish fleishig meal donated by the local kosher barbecue joint, Mendel’s Backyard, whose proprietor stuck around to serve it. The waterfront home — mere blocks from the disaster site — was offered by a member of the Surfside Jewish community. Another local, a Surfside eminence grise named Steve Eisenberg, made the gathering happen.

Roughly half of the 70 Hatzalah members who took shifts in Surfside over the last week came to unwind. They devoured hamburgers and hot dogs and barbecue beef. They puffed on cigars. They caught up with each other. They looked out at the water.

I was there too, a guest of Eisenberg, as a journalist eager to make myself invisible (I was asked not to conduct interviews or record the event) but also as a Jew happy to shake the hands of these volunteers. Since arriving in Surfside Wednesday morning, I’ve spent the vast majority of my waking hours in the blocks surrounding the site, bouncing from shul to kosher establishment to media center, always on foot. Moving constantly has made it hard for the tragedy to sink in. And some 140 people are being counted as “missing” or “unaccounted for,” masking their fate, which is all but sealed with the rescue operation nearing its conclusion. 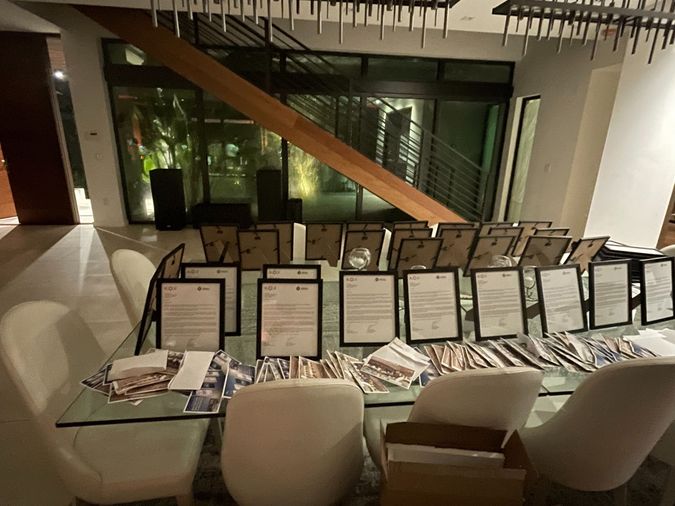 Framed letters from the county thanking each member of the Hatzalah team for their work were awaiting the volunteers when they left. The envelopes contain challenge coins from Magen David Adom, the Israeli paramedic service. By Louis Keene

If I have kept some professional detachment from the tragedy, I have been struck by how Jewish it feels. It was a distinctly Jewish tragedy — one local rabbi estimated that more than 50 Jewish people are among the missing — but also a distinctly Jewish response. That began when Hatzalah of South Florida arrived on the scene, continued with the calming presence of Miami-Dade Mayor Danielle Levine Cava, and was rounded out by the arrival of an Israel Defense Force search-and-rescue team and United Hatzalah — also from Israel — which brought a therapy Cavalier King Charles spaniel named Lucy to comfort the families.

FLORIDA: WATCH: KIDDUSH HASHEM: Surfside Mayor Burkett emotionally tells a story of how he met a young Jewish girl sitting by herself saying Tehillim near the collapse site, where one of her parents is missing. pic.twitter.com/ULSIub9sMM

But I have also felt like an outsider, even as an Orthodox Jew in Orthodox Jewish spaces. At the Shul of Bal Harbour, where I have been davening shacharit each morning, I am regarded suspiciously by armed guards. I am wary of being invasive, doing “parachute journalism,” or exploiting others’ personal devastation for clicks. So at the kumsitz, I thanked a few of the volunteers personally, and I heard some of their stories, but mostly I kept my distance.

After a Hatzalah leader stood before the group to commend the men for their selflessness and hard work, a Hasidic singer named Yehudah Green, who flew in from New York for the occasion, took the microphone. We’re in the three weeks of the Jewish calendar between the 17th of Tammuz and Tisha B’Av — fast days that mark the fall of Jerusalem — a period in which Orthodox Jews do not listen to live music. But Eisenberg said that for these Orthodox Jews, making an exception was not only permissible, it was imperative.

Green started with a ballad, Avinu Malkeinu — our Father, our King — rousing the group to join him. They bellowed the familiar tune loud enough to be heard from the street, and probably across the water. Then Green pivoted to something more upbeat — a chant that got the men smiling and locking arms and dancing and shouting: “Mashiach! Mashiach! Where are you?”

A rabbi who has been assisting with spiritual support leaned over, and over the deafening loudspeaker, shared an interpretation of “mashiach” that is less an individual than an idea — the pursuit of perfection. He said mashiach is about looking forward, trying to improve, not dwelling on the past. 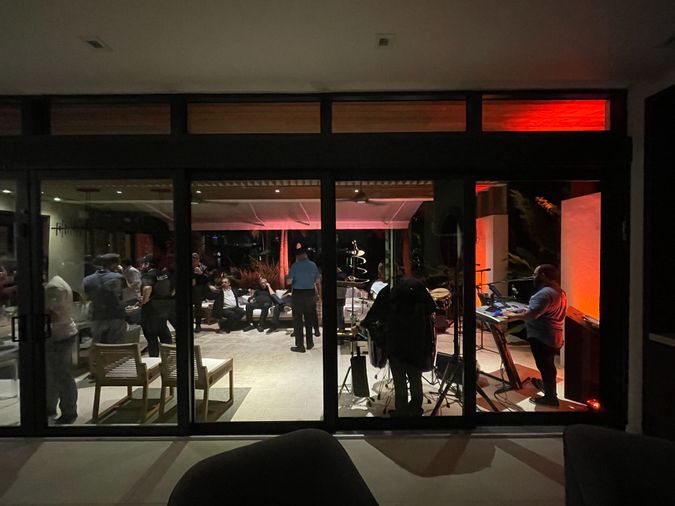 A live band played for Hatzalah of South Florida volunteers as they unwound after a long week. By Louis Keene

I was speaking to someone in the kitchen later in the evening when I heard a call and response from the other room. What I thought was grace after meals was actually the beginning of maariv, the evening service. I headed to my car to get my prayer book, and by the time I got back, the men were already saying the central Amidah prayer, around a table that bore framed thank-you letters from the Miami-Dade County government.

Most of the volunteers got into their cars to head home. A few headed back to the site.

In Surfside, a Jewish tragedy receives a Jewish response