The cover of “Breathe,” by Joyce Carol Oates. Image by Courtesy of Ecco

Joyce Carol Oates published two short story collections and a volume of poetry in the first six months of 2021, so you’d be forgiven for thinking she was done for the year.

But you’d also be wrong. The author, whose prolific output has earned her acclaim and skepticism, has a fourth — and very personal — book out this summer.

The latest in Oates’ dozens of novels, “Breathe” is a harrowing, claustrophobic account of terminal illness, mourning, and a young widow’s embrace of “duty” to survive. Michaela, a moderately successful writer in her 30s, is eager to follow her husband, an eminent scientist named Gerard, to an academic residency in New Mexico. She expects the trip will be a prolonged honeymoon — if an unconventional one, conducted in a sterile rental house stocked with eerie, threatening art. But soon after they arrive, Gerard falls ill with a mysterious disease from which, Michaela realizes with dread, he will not recover.

The nightmarish hospital scenes in “Breathe,” and the medical bureaucracy with which Michaela contends, will inevitably remind readers of the coronavirus pandemic. But Oates began the novel in April 2019, shortly after the death of her own husband, cognitive neuroscientist Charlie Gross. “Breathe” is not a cipher for Oates’ life, but it marries her consummate sense of the uncanny with a very intimate sense of tragedy.

I spoke with Oates over email about her daily routine, the real experiences that grounded “Breathe,” and the books on her nightstand right now. The following conversation has been edited for length and clarity. 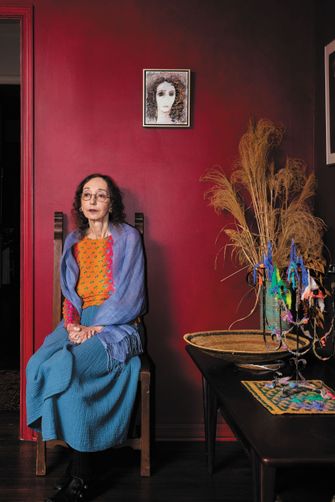 “Breathe” is the second book you’ve published in 2021. What is your daily writing routine like?

I begin work as early as possible, usually around 7 a.m., and work intermittently through the day — of course, taking a break at about 1 p.m., and in the later afternoon. Often I lose track of time altogether…

This book is grounded in your husband’s death. To what extent is Gerard’s character based on Charlie? In what ways are they different?

It is always a challenge to find the universal in personal, private experience. But some experiences are so ravaging, they seem almost to enter us from an impersonal source, like an invasion — disease, disaster.

Gerard is a scientifically-minded academic; Charlie was a research neuroscientist associated with a university. Gerard is like Charlie in his admiration for Darwin and for a life of intellectual inquiry. Charlie would have been a more elusive portrait to capture in prose, though I think that I have given justice to his complexity and mercurial nature in the portrait of Hugo in my previous novel, “Night. Sleep. Death. The Stars.” Gerard begins to change personality in the hospital— this is likely true of most terminal cases — and it is that alteration that so frightens Michaela.

For Michaela, a strong marriage has its pitfalls. Because her relationship with Gerard is so fulfilling and central to her identity, his death threatens her on an existential level. Why was that duality so important to you?

We don’t know how we will react when someone close to us dies. I am sure that most people experience this: the sudden revelation, the visceral shock. It is not unlike losing a limb. There is the terrible fear of being “abandoned” — also, the fear that one is “abandoning” the stricken person in the hospital.

Throughout the novel, the eerily austere New Mexican landscape provides a physical parallel to the psychological terror Michaela is experiencing. How did you come to see this setting as so evocative?

Charlie was hospitalized in California, far from our home in Princeton, so the experience was doubly disorienting. But the austere western landscape is both beautiful and haunting, an appropriate place for such a nightmare. I was thinking of Santa Fe and its surroundings, which I know fairly well from having visited several times.

Your paternal grandmother, who gave you your first library card and typewriter, was Jewish. But you didn’t discover that until you were already an adult and an established writer. Has that knowledge changed the direction of your work?

Yes, probably. But I had long been attracted to Judaism and what might be called the “American Jewish” culture — a concern for books, the life of the mind, music, art, science, social justice — embodied very much in my late husband Charlie, a “Red Diaper” baby from Brooklyn. Gerard, by contrast, was brought up Catholic; his religious affiliation doesn’t much define him, as mine had not much defined me.

You tweet prolifically, weighing in on everything from abortion restrictions in Texas to photos from the Bodega Cats account. Does what you see or experience on social media affect your writing?

No, probably not. Twitter was originally a platform for recommending books, films, music. It became heavily politicized in 2016, unfortunately. But—there are cats! And dogs.

What are you reading right now?