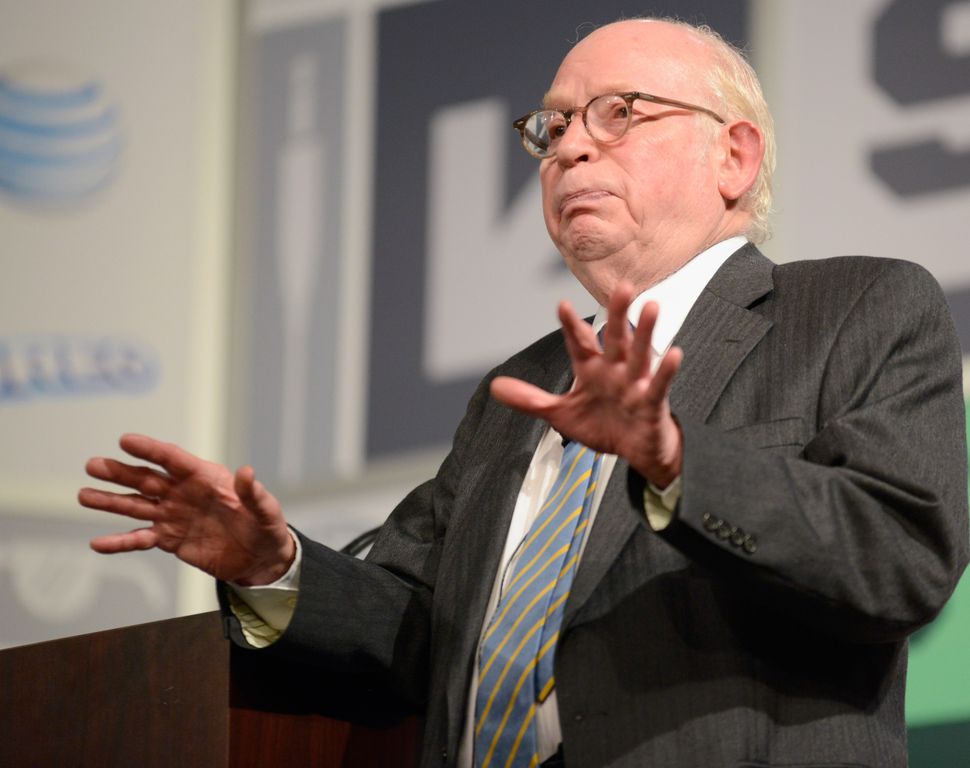 Theoretical physicist Steven Weinberg speaks onstage at the Toward the Unification of Physics panel during the 2013 SXSW Music, Film + Interactive Festival at Austin Convention Center on March 8, 2013 in Austin, Texas. By Jordan Naylor/Getty Images

The Nobel Prize-winning physicist Steven Weinberg, who died on July 23 at age 88, was publicly proud of being an atheist. But he retained a Jewish structure to his thinking throughout his life.

Weinberg received the Nobel for his innovations, building on the work of Albert Einstein, in helping to understand how the tiniest components of the universe work. One of his specialized fields, electroweak forces, required hairsplitting analysis worthy of Talmudic scholars.

Fortunately, Weinberg was never a weak force himself. His powerful and original research continued until the end of his life, accompanied with an increasing amount of writing for a general readership in which he was inspired by English prose stylists from Edward Gibbon and Lytton Strachey to Anthony Trollope. Religion — and disbelief — were also constant themes.

In “The Atheism Tapes” (2004), a BBC-TV documentary series hosted by the British Jewish director Jonatha Miller, the Bronx-born Weinberg told Miller about a “very distinguished” astrophysicist friend — an “Orthodox Jew” who “doesn’t believe in God.” For that astrophysicist, Weinberg said, “religion is a framework for life that he inherited from his parents. He grew up with it, he wants to stay in it. But he doesn’t think there’s anything behind it.”

Like that friend, Weinberg didn’t see anything behind ritual observance — he just didn’t participate in that observance, either. Scott Aaronson, a theoretical computer scientist, recalled in a memorial for Weinberg that in 2017, when he invited Weinberg to the brit milah of his newborn son, Weinberg RSVP’d that he would “be happy to come over… another time” — just “not to witness any body parts being cut.”

Even so, Weinberg remained preoccupied by Judaism, including in his ardent support of the state of Israel. He also made regular public appearances to advance his viewpoints on related issues.

In 1999, during a public debate with John Polkinghorne, a physicist and Anglican priest, at the National Museum of Natural History in Washington, D.C., Weinberg cited the flaming sword that the Book of Genesis says God entrusted to the cherubim to guard the gates of Paradise after Adam and Eve were banished. If God existed, he said, a flaming sword might descend from above and strike him dead to prove it.

In an essay published the same year, in which he rejected the notion of a good and all-powerful God, Weinberg wrote “I have seen a mother die painfully of cancer, a father’s personality destroyed by Alzheimer’s disease, and scores of second and third cousins murdered in the Holocaust. Signs of a benevolent designer are pretty well hidden.”

Weinberg added that some believers, like the Puritan English poet John Milton in “Paradise Lost,” justify the amount of evil and suffering in the world by claiming that free will is necessary in human life. To such arguments, he replied, “It seems a bit unfair to my relatives to be murdered in order to provide an opportunity for free will for Germans, but even putting that aside, how does free will account for cancer? Is it an opportunity of free will for tumors?”

Speaking to The New York Times in 2000, Weinberg challenged one of the celebrated chapters in the history of the patriarch Abraham. Reacting to the binding of Isaac, in which Abraham is commanded by God to offer his son as a sacrifice in the land of Moriah, he commented: “Even if there is a God, how do you know that his moral judgments are the correct ones? Seems to me Abraham should have said, ‘God, that’s just not right.’”

“Many people do simply awful things out of sincere religious belief… because they believe that this is what God wants them to do, going all the way back to Abraham being willing to sacrifice Isaac because God told him to do that,” Weinberg said.” Putting God ahead of humanity is a terrible thing.”

Yet Weinberg’s beliefs were eternally complicated, especially when it came to squaring his lack of religious faith with his celebration of Jewishness, particularly in the context of Israel. In a 2008 essay, he described the Jewish state with tourist brochure-style encomiums:

“The greatest miracle of our time is the rebirth of Israel in its ancient home. And, with it, the transformation of an inhospitable landscape into the lovely land of Israel, with its tree-lined streets, cafes, universities, its optimistic people, its liberated women, its liberal democracy and rule of law. The continuing miracle is the survival of this remnant of a life-loving people on a sliver of land, despite repeated attacks from hostile Arab armies… Miraculously, in the twentieth century Jews learned again to use arms to defend themselves.”

His repetition of the word “miracle” three times in a few lines suggests that he saw the state of Israel — its democracy, its people and especially its women — as a general exception to his overall rejection of religious sensibilities.

In a January 2005 issue of Scientific American, he wrote to castigate the periodical for presuming editorially that Albert Einstein would have been “outraged” by modern day Israel.

Weinberg asked, “But with whom would he be outraged? The Israeli Jews wanted nothing more than to live peaceably with Arabs when they accepted a small fraction of the original Palestine Mandate in the 1948 U.N. partition, but they were attacked by all neighboring Arab states… Yes, I think Einstein would be outraged. He never forgave Germany for what it had done to the Jews of Europe, and I don’t think he would forgive Arab leaders for what they have done to the Jews of Israel.”

In 2007, he cancelled a scheduled lecture at a London symposium in response to what he termed a “widespread anti-Israel and anti-Semitic current in British opinion.” The decisive factor for him was the U.K. National Union of Journalists’ temporary resolution earlier that year to boycott Israeli goods and services. They reversed the decision a few months later.

Before this reversal, Weinberg commented: “Given the history of the attacks on Israel and the oppressiveness and aggressiveness of other countries in the Middle East and elsewhere, boycotting Israel indicates a moral blindness for which it is hard to find any explanation other than anti-Semitism.”

Weinberg’s personal resolve was honed through a career during which he was seen as a staunch individualist who wrote his scientific papers alone, unlike most scientists, who prefer a more collaborative approach. Graduate students at his longtime academic base of the University of Texas marveled, calling him “Stevie Wonder.”

His televised chat with Jonathan Miller ended with his declaration that science is “corrosive of religious belief. And it’s a good thing too.” Miller responded with exultant Tevye-like finger snaps straight out of “Fiddler on the Roof.”

Like much of Weinberg’s critique of Judaism and other religions, the conclusion presented an image of an old Jew kvetching about God. So what else is new?