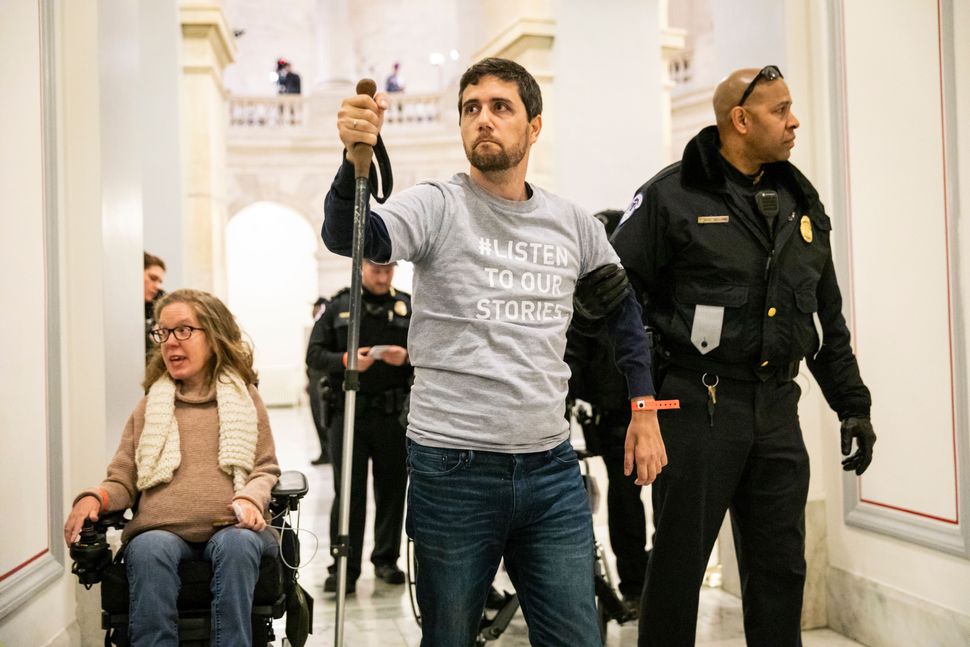 Editor’s Note: “Not Going Quietly” is premiering on PBS’ “POV” Monday, Jan. 24 at 10 p.m. To mark it’s TV debut we have republished this interview with director Nicholas Bruckman from August 11, 2021.

When Nicholas Bruckman met Ady Barkan in early 2018, he was prepared to be bummed out.

Barkan had just confronted then-Senator Jeff Flake on an airplane with his personal tragedy.

“I’m 33. I have an 18-month-old son, and out of nowhere I was diagnosed with ALS,” Barkan told Flake, urging him to vote down a tax bill that promised massive cuts on disability benefits. “This is your moment to be an American hero.”

Soon after the exchange went viral, Barkan and the woman who filmed it, political strategist Liz Jaff, kickstarted “Be A Hero” fund. Jaff reached out to Bruckman, whose production company, People’s Television, makes social justice-oriented commercials, to fly out to Santa Barbara to film the launch video.

“I thought it would be kind of a somber affair — he’s got ALS, and that’s going to be a bummer, but he needs healthcare and it’s going to be one of those kinds of tear-jerking spots,” Bruckman said.

But Barkan surprised him. He didn’t have an “ounce of self-pity.” Sitting with his shirt off, he told Bruckman to get started on the interview and roll the camera. Later that day Barkan was smoking a joint when he pitched Bruckman the idea of taking the show on the road — bird-dogging politicians throughout the country who were voting to gut healthcare.

Barkan meant it, and what started as an ad became “Not Going Quietly,” a documentary feature opening theatrically August 13. Bruckman’s film tracks Barkan from his diagnosis up to the eventual loss of his mobility and birth of his second child, Willow. Along the way Barkan testifies before Congress, is arrested for his activism and interviews the 2020 Democratic presidential candidates.

The film is a startlingly intimate, often funny window into Barkan’s personal life and his campaign to hold power accountable. Bruckman also views the film as a time capsule for Barkan’s family, capturing the last six months of his natural voice. But as the documentary receives a wider audience, Bruckman values it as an extension of Barkan’s activism. He hopes that audiences will find in the film “a spark of the idea that ‘If Ady can do it, so can I.’”

I spoke with Bruckman about his relationship with Barkan, and the larger movement behind the film. The following conversation has been edited for length and clarity.

PJ Grisar: I was surprised to see that some of the earliest footage in the film was Barkan documenting himself, from the beginning of his diagnosis. 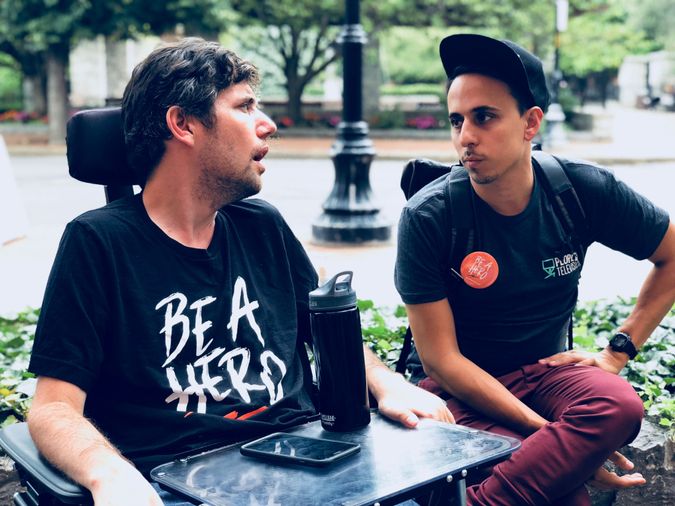 Nicholas Bruckman: He had chosen to document this himself long before I came into his life as a filmmaker. That speaks to how Ady, even before the film, had spent 10 years as a storyteller. And when I say storyteller, I mean political organizer, but what Ady did, as any good political organizer does, is brought people who are impacted by policies to confront their representatives. But the story has always been somebody else’s. He’s a man of relative privilege, of white, upper-middle class, Jewish background — he comes from that sort of same cultural milieu that I come from, we’re the same age, and both of our parents lived on the Upper West Side of Manhattan, a couple blocks from each other. I don’t know that I would have taken these cards dealt in the same way. When Ady saw the story had become his own, I think he had a lot of foresight that it might have meaning. It wasn’t until a long time later that he confronted Jeff Flake that it began to take on the life that it did.

He doesn’t seem like a particularly shy person, but you capture some very intimate moments with his family and his healthcare. Did you have to negotiate when to put the cameras away?

Ady understood intuitively the power of his grueling and emotionally difficult experience to shape a political narrative. Rachael, his wife, and I and Ady had many discussions about what types of things we would have access to and where we should be sensitive. A lot of the time it had to be just me, or just the producer, Amanda [Roddy]. Just the camera operator, so that we didn’t have the footprint of a documentary crew. I actually lived in the garage of Ady’s house for about a week so that I could just kind of slip in and out and capture some of the private moments there.

So they were open. And of course he has a whole team with him through a lot of his caretaking.

There were some real ethical issues that I had to navigate which may not be as clear on screen. As you see in the film Ady is going on the road, he’s literally losing his voice, permanently, and at times he really only had about 15 or 30 minutes of speaking in him a day in his vocal cords, and of course I wanted to interview him. But he had to give a speech that day, and he had to also call his son, and speak to him. There were many times where I had to step back, and look at the big picture of what’s most important — is it this film or is it Ady using those precious words to talk to his family? That kind of ethical limitation ended up enhancing the film, because it forced us to kind of create a more cinéma vérité narrative experience that’s less based on interviews and more based on following the action.

The action seems like something that would have been hard to anticipate when you first met him to film an ad.

I didn’t think we would be at the kind of upper echelons of the Democratic Party or progressive movement. But it was hard, Ady did so much and made so much news as we were making this film, it was hard not to chase those stories all the time. There are many, many things that Ady’s done — the work he’s done around the vaccine distribution recently. But I wanted to really stay grounded in the film, that it wasn’t just Ady’s Greatest Hits, it was telling the story of how Ady’s relationship to his family and to his son, and his growing belief in himself as a father was translated into his belief that he could still change our country and strengthen our democracy.

How do you think he’s changed activism?

I think he’s really blended a lot of the most powerful and compelling elements of organizing in the 21st century. Those elements are social media and technology, personal storytelling, bringing that to life on video, both in the short and long form, and this bird-dogging concept of confronting legislators that you see in the film, and doing that digitally. Of course he’s done all this really with his eyeballs, which are the only kind of physically working part of his body. So I think he’s changed activism just in his universal nature of “Well if Ady can do it, what’s my excuse?” And I think that’s the feeling I had making this film.