How Jewish alliances fueled the rise of Vernon Jordan 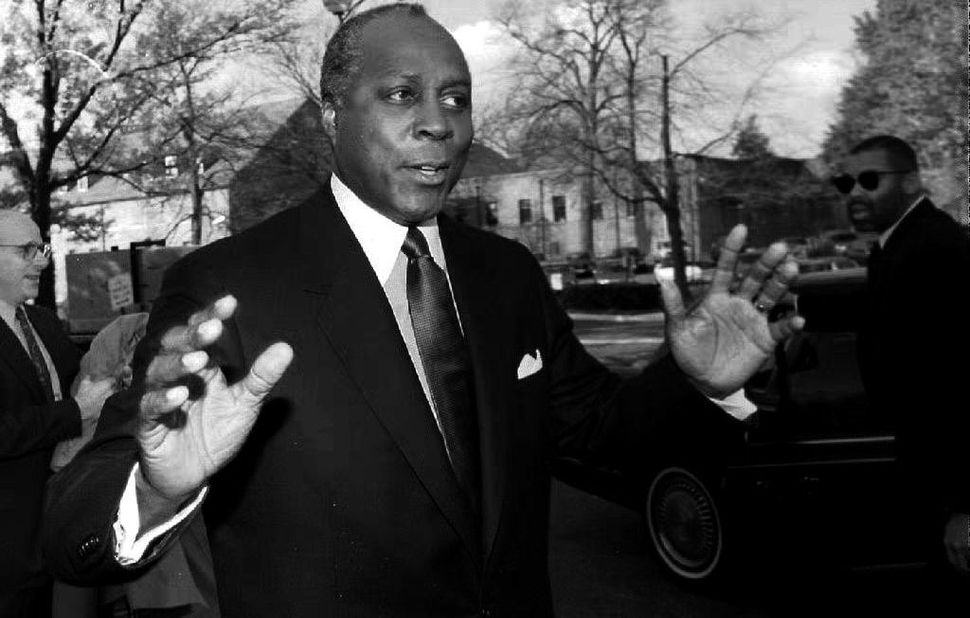 Vernon Jordan, who died in March of this year, would have turned 86 today, Aug. 15, which provides a good occasion to examine how a Black power broker and civil rights advocate used Jewish alliances to further his goals.

More than a mere attorney, Jordan was a fixer and kingmaker. He owed his entry into the high-toned law firm of Akin Gump Strauss Hauer & Feld to senior partner Robert Strauss, a Texas-born mover and shaker of German Jewish origin.

In turn, Jordan used his reported “golden Rolodex” to land jobs for a number of Jewish businesspeople, among them Lou Gerstner as CEO of IBM, and James Wolfensohn, an Australian of Austrian Jewish origin, as president of the World Bank Group.

Jordan clashed with Jewish friends only when his own career ambitions were thwarted. In a memoir, he recounted how Morris Abram, a civil rights attorney who negotiated the release of Martin Luther King from a Fulton County, Georgia jail and later served as president of Brandeis University, surprisingly declined to make Jordan a partner at his law firm.

Prone to biblical diction, when Civil Rights lawyer Burke Marshall died in 2004, Jordan began a memorial appreciation by citing 2 Samuel 3:38: “Know ye not that there is a prince and a great man fallen this day in Israel?”

Jordan’s distinguished achievements included working to desegregate the University of Georgia, serving as that state’s field director for the NAACP and president of the National Urban League.

Yet he did not embrace civil disobedience, and at the NAACP, actively strategized to reach civil right goals with methods distinctly different from those of Martin Luther King.

Jordan sought to gain corporate leverage and status as a presidential adviser of the Bernard Baruch variety, especially to Bill Clinton. Yet he refused any political appointment that would require Congressional approval, or investigation into his income and potential conflicts of interest.

All the while he demonstrated affinities for American Jews, apportioning praise and blame in charismatic public speeches that made audiences kvell.

One such was delivered in June 1974 at the annual meeting of the Atlanta chapter of the American Jewish Committee. To start, Jordan quoted Ovadia Yosef, the Sephardi Chief Rabbi of Israel, who had stated in Hebrew a month earlier at a rally for Soviet Jewry that “if a Jew is in pain any place in the world, every Jew feels that pain.”

Jordan added: “I would amend that only to read that ‘every decent human being feels that pain.’ For the treatment of the world’s Jewish minority has historically been the barometer of the extent of decency still alive in the world, just as America’s treatment of her black minority has historically been the measure of the maturity and decency of our nation.”

Rather than despairing at America’s treatment of both minorities, Jordan proceeded to assert that “all decent people” should be concerned about persecution of Jews in Syria, Iraq and the Soviet Union, as well as the continued existence of the state of Israel. He added his conviction that most African-Americans shared his views on this matter.

Jordan especially noted the empathy felt by black people when “dark-skinned Jews from North Africa” were victims of terrorist attacks in Israel and cited “The New Anti-Semitism” published by the Anti-Defamation League of the B’nai B’rith to claim that its analysis of bigotry against Jews applied precisely to black experience as well.

Having prepared his listeners, Jordan then announced that he would “speak with the bluntness of a true friend” to argue that Jews should support affirmative action for Blacks, despite a lawsuit brought in 1971 by Marco Defunis, a Sephardic Jewish Seattle native, against the University of Washington Law School over its admission of African-American applicants instead of himself.

Noting that the National Council of Jewish Women and the Union of American Hebrew Congregations did indeed support affirmative action, Jordan called for further allies, citing “Herzl’s precept that ‘Whoever would change men must change the conditions of their lives.” Clearly not thinking it necessary to mention Theodor Herzl’s first name in this company, Jordan finished in a blaze of eloquence by quoting the “timeless words of the great Hillel: ‘If I am not for myself, who shall be for me…’”

Likewise, in 1984, Jordan tried to tamp down the outrage after Jesse Jackson as presidential candidate referred to Jews as “Hymies” and to New York City as “Hymietown” in a conversation with a reporter.

Jordan’s speech to the New York chapter of the AJC requested an “act of imaginative sympathy” from Jews to see things from the African-American perspective, describing America’s Jewish community a bit overoptimistically as “largely economically secure and self-confident.”

Jordan asked Jews to understand that black Jackson supporters were just like Jews who “flocked out of their ghettos in the early years of this century to vote for the first Jewish candidates for local and statewide offices—out of justified pride and enthusiasm for participating in the politics of the nation. Those first Jewish candidates were radicals. They were outspoken advocates of what they and their constituents perceived to be Jewish interests. And some of them would be embarrassing to sophisticated Jewish voters in the 1980s.”

It was flattering for Jews of the era to be called political sophisticates, even if voting for Ed Koch, Abe Beame and Jacob Javits hardly required extreme refinement. Yet as a matter of historical fact, pioneering American Jewish socialist candidates such as Victor L. Berger and Morris Hillquit (born Moishe Hillkowitz in Riga) were dignified types, not the sort who would casually drop racial slurs to a reporter.

Jordan stressed the “essential interdependence” of America’s Jews and blacks, and asked his audience to overlook the occasional unfortunate mediatized quote that “only provides entertainment for anti-Semites and racists.”

His conclusion cited a “New York Times” article from July 1893 about a Jewish ghetto, declaring that it might have been written more recently about black ghettos, and observing sweepingly: “That racist Times article was about your grandparents.”

In an essay from 1975, again about affirmative action, Jordan pointed to a study in “Commentary” by the Israeli educator Jacob Katz on proliferating university Jewish studies programs and argued that its assertions were interchangeably true about blacks.

Such unsubtleties were rare in Jordan’s public career. Overall, his radiant lifelong example was what he called a “declaration of interdependence” between American Jews and Blacks.

How Jewish alliances fueled the rise of Vernon Jordan