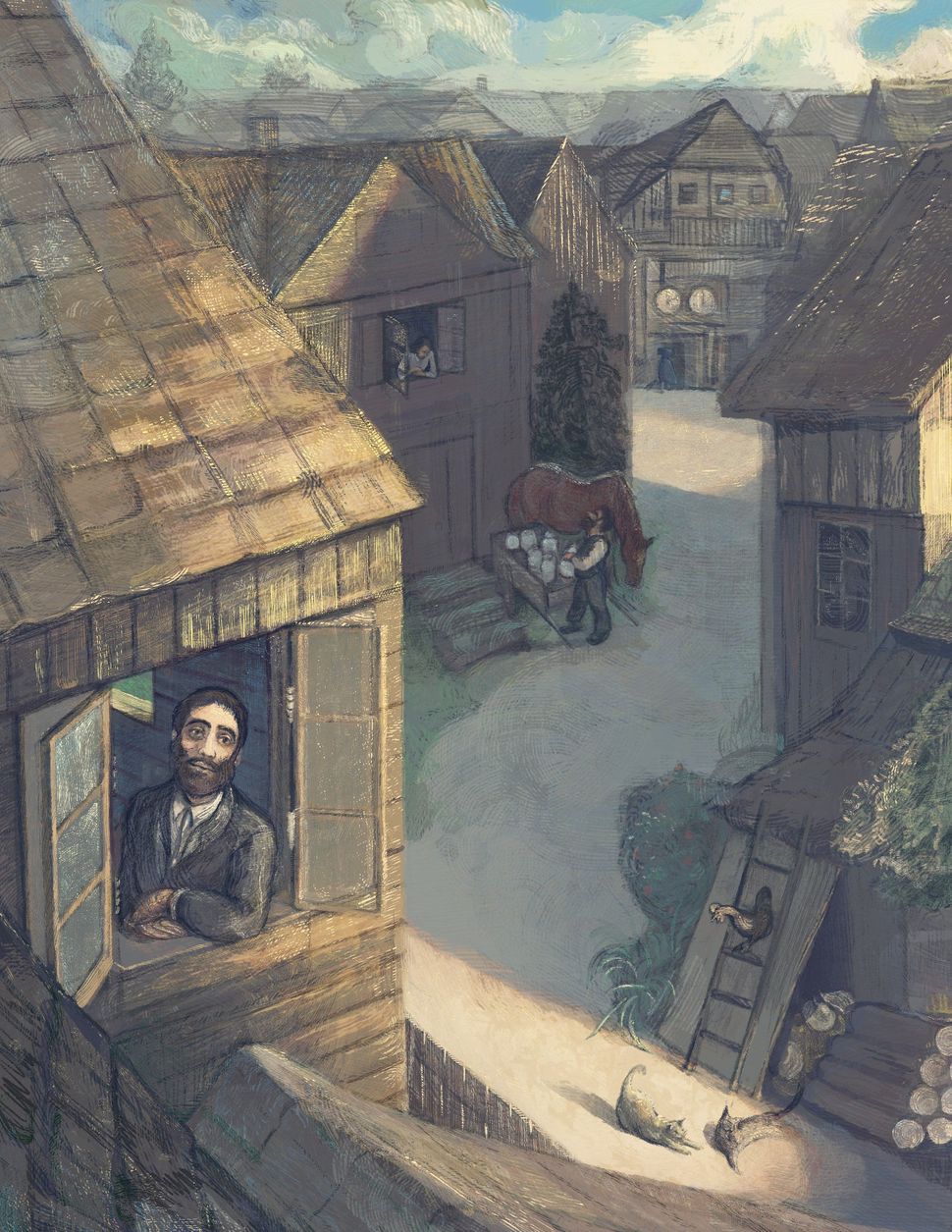 Shnayderl peers out a window in his small Polish village. Illustration by Courtesy of Kinder-Loshn, Yehuda Blum

David Forman’s newest book is an old one. Rich with tales of giants, the Tudor court and highwaymen besieging a humble Jewish village, “The Clever Little Tailor” is the first English translation and bilingual edition of Yiddish writer Solomon Simon’s 1933 collection of stories about Shnayderl the tailor.

The book is noteworthy for having the Yiddish and English lines side by side on opposite pages, but all the more remarkable for what’s happening between those pages: Simon was Forman’s grandfather, and the two are in conversation, telling the same stories in their native languages and cementing a family legacy.

Forman, a writer and cataloger of Jewish manuscripts at Cornell, remembers Simon, who he called Zeidy, as “a light.”

“He smoked foul-smelling cigars and drank whiskey and nonetheless when he put me on his lap as a little kid, I was happy there,” Forman said.

Forman has fond memories of going to the corner store, where Simon would buy him a pink rubber ball — soon to be lost near the garage of Zeidy’s Brooklyn home. Of course, he also remembers hearing his stories.

There were the false tales of how Simon lost a finger on his left hand: animals in the woods; a pitchfork accident in the old country. (The real reason was Simon’s full-time work as a dentist, where his finger was a casualty of radiation from early X-Ray technology.) Forman’s parents read him the celebrated “Wise Men of Helm,” and he recalls Simon showing up to his school and summer camp and reading to the other kids.

But when Simon died in 1970, when Forman was 10, there were many stories left untold and many more that had never been translated into English.

“In addition to the loss of his vitality and his love and just his person, there was also all this other stuff about him that I couldn’t have,” Forman said. “I felt that. I wanted to learn Yiddish.”

It took till Forman was around 50, but he finally did learn, translating five books by Simon and learning more about his place among Yiddishists, where he often felt ignored for championing a world so many were eager to leave behind.

In addition to his lauded work in memoir and children’s literature, Simon left behind thoughts on what secular Yiddish institutions were missing and also weighed in on Israel. For his efforts, Forman said, he was “widely and cheerfully ignored.”

But as the onetime president of the Sholem Aleichem Institute, Simon did hold sway when it came to storytelling, and would often bundle his defense of the Old Country into his folk tales.

Of the folk stories, “The Clever Little Tailor,” the first of Forman’s translations of Simon to be published, by Kinder-Loshn, whose publisher is Jordan Kutzik, former deputy editor of the Yiddish Forward, was ripe for readers unfamiliar with Simon’s work or hungry for more.

The stories are clever, with the titular tailor outfoxing an antisemitic archbishop and getting the better of misers, bandits and giants. They also have qualities of Simon’s most beloved work surrounding life in the shtetl. But packaging them in a bilingual edition had special meaning for Forman, who learned Yiddish by reading with a Yiddish-to-English dictionary in one hand and one of his grandfather’s books in the other.

It was a dream to have a bilingual edition, Forman said, even if that presentation proves somewhat challenging for his process. Because the lines of text are paired, Yiddish on the right side of the spine, English on the left, the words need to track closely. If Simon used a metaphor that may not work quite as well in English for example, the constraints of this set up may mean sticking more closely to the original text.

Some puns are lost in translation, but Forman took a particular delight in translating songs that Shnayderl sings on his cart, taunting robbers.

Forman, who still identifies as a student of Yiddish, believes that the book, with new illustrations by Yehuda Blum, fills a need for people who have an intermediate understanding of Yiddish and for Yiddish speakers who are just learning English. But apart from its value as a teaching tool, Forman is interested in learning how children will like the stories.

“I’m excited to find out about that, and to maybe even go to a school and read aloud the stories like my grandfather came to my school,” Forman said.