Why a master of languages decided to reveal his true identity 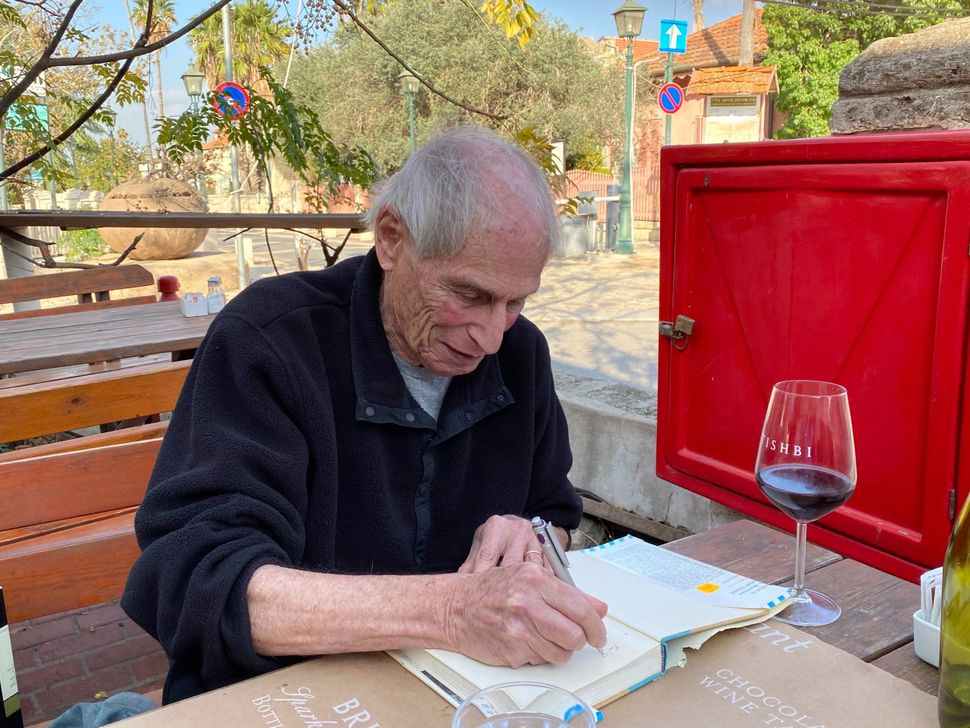 “A Complicated Jew,” the Israeli translator and literary critic Hillel Halkin’s new essay collection, includes his thoughts on over half a century of Hebrew and Yiddish literary experience. Among Halkin’s acclaimed translations are works by Sholem Aleichem, Yosef Haim Brenner, S. Y. Agnon, Shulamith Hareven, A. B. Yehoshua, and Meir Shalev. He has also written biographies of the poet Yehuda Halevi and political activist Ze’ev Jabotinsky as well as a study of the Bnei Menashe group in India who claim descent from one of the Lost Tribes of Israel and who are gradually making Aliyah. Born in New York in 1939, Halkin moved to Zikhron Ya’akov, Israel in 1970. From his home there, he shared reflections on his past and current activities.

In your 2002 essay “The Great Jewish Language War,” you mention that you “grew up thinking of Yiddish as an enemy, although your parents spoke the language and subscribed to the “Morgn Zhurnal,” the daily Yiddish newspaper. Was the Yiddish Forverts considered too radical?.

I don’t remember the Forverts ever being mentioned in my house. Among the major Yiddish journals, the Morgn Zhurnal was religious and to the right. The Forverts was not taboo among religious Jews but it wasn’t the paper that my father would have read. The only newspaper I remember being really forbidden fruit was The Daily Worker, which I had to hide under my jacket after picking it up in the subway.

In a 2011 interview, you said that as a young reader, you strongly identified with the character of Stephen Dedalus the conflicted Catholic protagonist of James Joyce’s “Portrait of the Artist as a Young Man” and “Ulysses.” Where are the affinities?

I still have that identification with Stephen, including the Stephen in “Ulysses.” I think “Portrait of the Artist as a Young Man” is perhaps the most beautiful English novel. I’ve read it and read it many times. My own experience of Judaism was very similar to Stephen’s growing up and rebelling against Catholicism. Stephen never gives up on being a Catholic, but in being a believing Catholic. He still thinks like a Catholic and I think that’s true of me too [for Judaism].

In a book on a visit to Israel published in 1994, the Canadian Jewish author Mordecai Richler was outraged by your suggestion that the only “honest” place to live for anyone who cares seriously about being Jewish is Israel. Would you still offer this advice today?

I think so. Maybe I would add the proviso that either the only place to live is Israel or in America, while feeling guilty about not being in Israel. Richler was quoting from my first book, “Letter to an American Jewish Friend,” and I still think that the future of Israel is immigration and any Jew who cares deeply about Israel should want to be part of that future.

Shmuel Yosef Agnon’s “A Guest for the Night,” which you term “one of the greatest Hebrew novels ever written” has an English translation by Misha Louvish that you call a “perfect disaster, one so bad that anyone judging its author by it alone would have to conclude that his winning the Nobel Prize was pure flimflam.” What makes that translation especially bad?

There is a whole series of bad Agnon translations. Louvish translated “A Guest for the Night” back in the 1950s when there were very few translators of Hebrew into English. Agnon writes in a very, very unique Hebrew. It’s not rabbinic Hebrew, and it’s not modern Hebrew; it’s a synthesis of the two: Agnonic Hebrew. Many translators have tried a direct equivalent in English and it’s a complete disaster. You have to try to translate Agnon by a different set of stratagems.

It certainly seems to us to have them. Alter mentions in his introduction that it’s very hard to judge the Hebrew of the Bible according to some standard because there is no Hebrew outside the Bible from that time to compare it with.

You refer to Erich Auerbach’s book of literary criticism “Mimesis” in the context of biblical translation, which claimed that without believing in Abraham’s sacrifice, it is impossible to fully appreciate the narrative. But unlike Auerbach, you do not feel it is necessary to believe in the Bible to fathom it, just to relish the power of literature?

In one of his last interviews, the literary critic Harold Bloom is quoted as claiming to have reread a translation into Yiddish by Ze’ev Jabotinsky of sections from Dante’s “Divine Comedy.” Yet as you have mentioned, Jabotinsky translated Dante into Hebrew, not Yiddish, right?

I would only imagine that Harold Bloom was embellishing on the truth. Bloom was an odd character and liked to pretend to have greater Jewish knowledge than he did. You’re right, Jabotinsky never translated Dante into Yiddish, only part of the “Inferno” into Hebrew. Jabotinsky was an extraordinarily good translator. His translations of Edgar Allan Poe are maybe not the greatest poems, but the most sound-rich in melodiousness. They accomplish as much in Hebrew as Edgar Allan Poe was able to accomplish in English.

Many writers have tiptoed around the likelihood that you are the longtime author of the Philologos column in The Forward and later for Mosaic Magazine. Without demanding any belated self-revelation, why write with a pseudonym?

It is me. For about 15 years, the identity of Philologos was a pretty-closely kept secret, but then it gradually leaked out. But I had the habit of denying it, due to coyness. But there’s no point in denying it if so many people know. Now Philologos has an independent status as a fictional character I invented. Philologos often says things or goes out on a limb by expressing crazy things that I would never say. But then he’s Philologos, he can do what he wants. That’s why I started to write that column to begin with; it gave me a lot of freedom. I wasn’t responsible for it.

Why a master of languages decided to reveal his true identity