How a Jewish photographer found his true calling in Chinatown 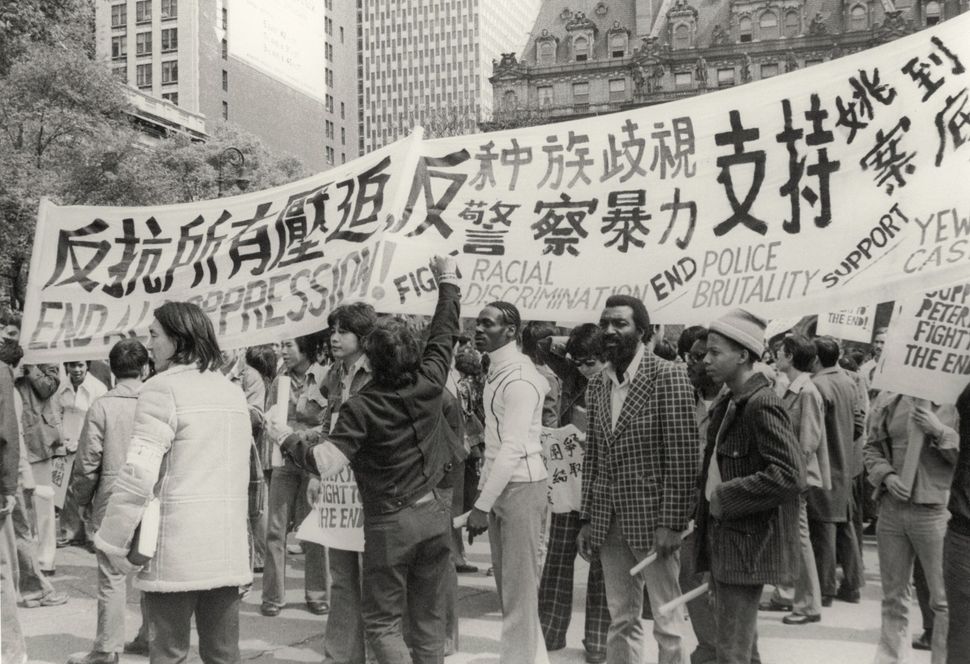 Timely Photo: Although more than 45 years old, this photograph of a 1975 protest against the police beating of Peter Yew, a 27-year-old engineering student, seems particularly relevant. Courtesy of Museum of Chinese in America collection

The life’s-work of the bespectacled, bow-tie wearing photojournalist Emile Bocian might have been lost forever if not for the foresight of actress Mae Wong.

After Bocian died in 1990, Wong, his close friend, discovered over 120,000 photographs, negatives and contact sheets stuffed into cigarette and shoeboxes in his apartment. Knowing he had no children, and that his nieces weren’t interested in the material, she eventually donated the material to the Museum of Chinese in America, MOCA.

That posthumous act of friendship underpins the theme of “An Unlikely Photojournalist: Emile Bocian in Chinatown,” a new photography exhibit at The Center for Jewish History. In partnership with MOCA, the exhibition showcases the work of Bocian, who spent over two decades capturing life in Chinatown. It also tells the story of how an outsider like Bocian, the Jewish son of immigrants, gained acceptance and trust in the community.

“We’re all immigrants, living side-by-side. There are many close parallels between our two communities, we share many similar interests, desires,” said Bernie Michael, President and CEO of the Center for Jewish History. “I think it’s important to come together now when there is anti-Asian hate and rising antisemitism. We support each other.” 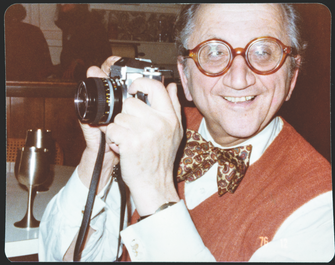 An Unlikely Photojournalist: Emile Bocian is the subject a new photography exhibit at The Center for Jewish History in partnership with MOCA. Courtesy of Museum of Chinese in America collection

In that way it’s a fitting subject to mark the museum’s official reopening after closing 17 months ago because of COVID-19, Michael said.

Born in 1912 to Polish immigrants, Bocian was the youngest of six children and the third born in the United States. While his father Harris worked as a “paper hanger,” according to his 1915 Petition for Naturalization, his mother Eva, raised the children and ran the household.

Bocian’s parents gave him his first camera when he was 16. And while he took an immediate shine to the hobby, it would be many years before he turned his pastime into something stopping short of a career.

At first Bocian endeavored to make a career in comedy and screenwriting. Next he tried his hand at public relations where, in 1951, he landed a job working for Mayo & Associates, a public relations firm. A few years later he founded his own midtown firm: Emile Bocian Associates. 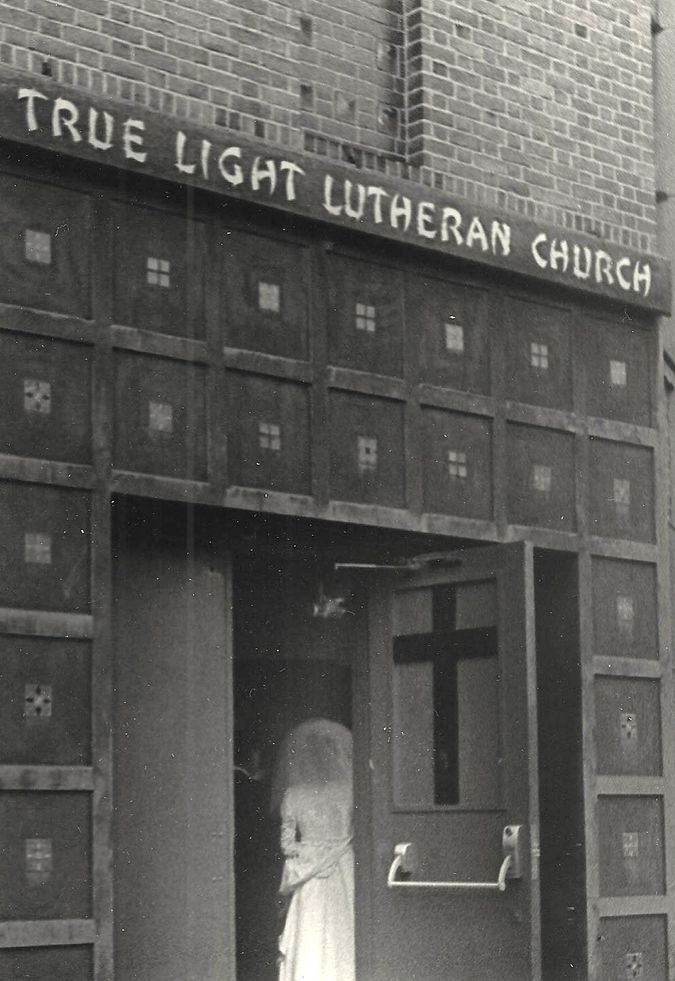 Intimate Moments: Bocian photographed a period in Chinatown history that was not particularly well-documented, such as this shot of a veiled bride peering out of the door of the Trinity Lutheran Church. Courtesy of Museum of Chinese in America collection

Then in 1972 his life changed directions. The Pagoda Theater hired Bocian, then 60, to run a publicity campaign for the U.S. premiere of Bruce Lee’s film “Fist of Fury.”

Soon after, Bocian decamped from Brooklyn to Chinatown and moved into the Confucius Plaza apartment complex where he was the only non-Asian resident. He reportedly turned his bathroom into a darkroom, and began working as a freelance photojournalist for the now-defunct Chinese-language daily The China Post.

With his Nikon camera and round glasses, the lifelong bachelor became a familiar sight in Chinatown snapping photos of storefronts and streetscapes, celebrations and crime scenes. 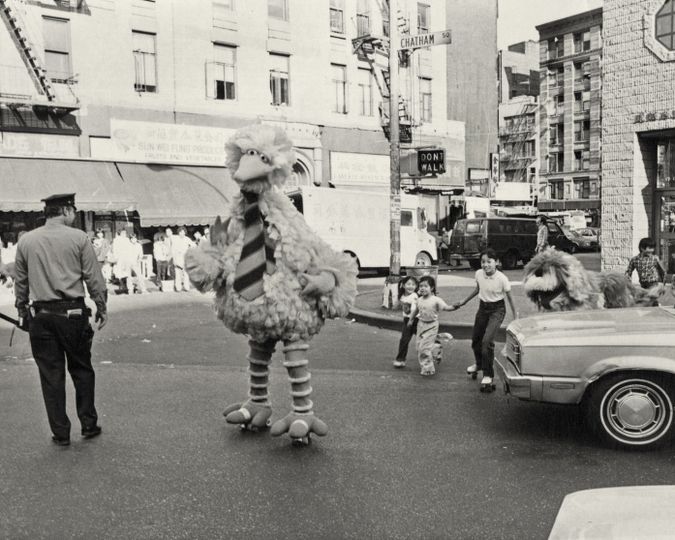 Chinatown, His Chinatown: Photographer Bocian, a self-described “expert on Chinatown,” never learned Chinese, but he earned the trust of his subjects, perhaps because, as the son of immigrants, he understood what it was like to be an outsider. Courtesy of Museum of Chinese in America collection

There were photographs of politicians and celebrities – Mayor Ed Koch and Big Bird – and the not so famous — a veiled bride peering out of the door of the Trinity Lutheran Church and teenagers with feathered hair grinning for the camera.

One of the first photographs to catch the attention of Kevin Chu, research manager and co-curator at MOCA, was a photo of Muhummad Ali.

“I wanted to know who this person was who could get so close to Ali. How did he do that? Originally I was interested in Bocian as a person; the more I went through the photos, the more I became interested in his work in the community,” Chu said.

Although the self-described “expert on Chinatown,” never learned Chinese, Bocian earned the trust of his subjects, perhaps because, as the son of immigrants, he understood what it was like to be an outsider. It’s also possible that the fictitious stories he sometimes told about himself helped open doors, Chu said. Bocian liked to tell people he was born in Kaifeng, the oldest Jewish community.

But while Bocian may have spun few tall tales — he once bragged that he discovered Neil Diamond — he did so to aid his efforts to record daily life in Chinatown during a time period that not well- documented. 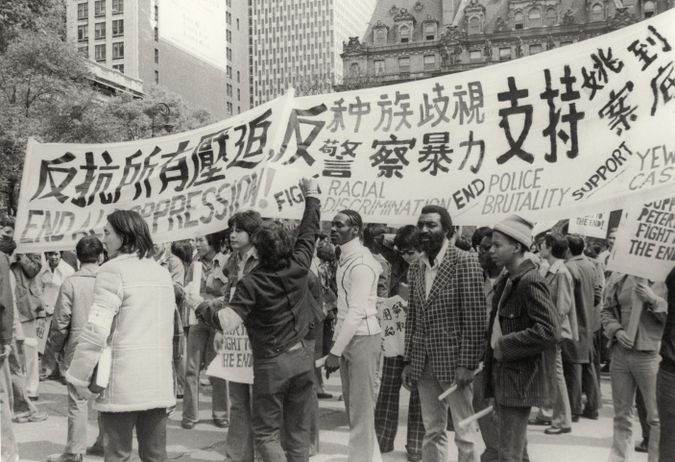 Timely Photo: Although more than 45 years old, this photograph of a 1975 protest against the police beating of Peter Yew, a 27-year-old engineering student, seems particularly relevant. Courtesy of Museum of Chinese in America collection

Among the dozens of photographs on display, MOCA’s curator and director of exhibitions Herb Tam said some are especially timely — for instance, photos of a 1975 protest against the police beating of Peter Yew, a 27-year-old engineering student and the 1979 march of 4,000 New Yorkers, mostly of Chinese descent, in front of the United Nations, to call attention to the plight of Vietnamese refugees.

“There is a misconception that the Chinese community is quiet,” Tam said. “Like Jews there is the model minority stereotype. These photos show that when certain issues arise the community speaks up and gets involved in politics and activism. That coming together is what makes it a strong vibrant community.”

“An Unlikely Photojournalist: Emile Bocian in Chinatown” runs through Dec. 31 at the Center for Jewish History.

How a Jewish photographer found his true calling in Chinatown