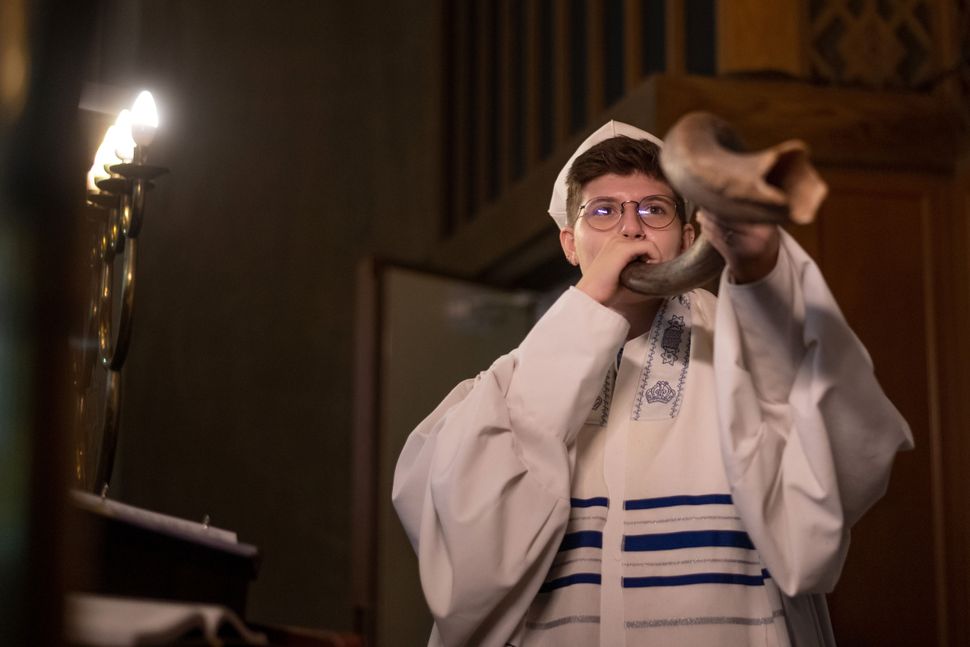 Two kinds of horns mentioned in the Hebrew bible. One, a metal trumpet, is described in great detail. The description of the other, the shofar, is, shall we say, limited? Guess which one has survived in continuous use by Jews since then.

What is a shofar, and how is it sounded? Well, that depends on whom you ask. Beyond the certainty that a shofar is of animal origin, almost every other conceivable aspect is open to debate. For thousands of shofar-sounding years, Jews have been grappling with the what, why, when, how, where, and who of the instrument.

Is the horn curved? Straight? From a ram? Goat? Ibex? Oryx? Kudu? Actually one of the only generally-held agreements is that in no circumstance, no matter what, should a cow horn be used — even though the cow is considered kosher. That unfortunate Golden Calf–worship episode when Moses was otherwise occupied permanently disqualified bovine shofar eligibility. As a musician I can personally attest to the lameness of cow horns on the shofar sonic spectrum.

To help elucidate the history and mysteries of this singular (musical or non-musical) instrument, Jonathan Friedmann and Joel Gereboff have gathered ten essays to guide us through the practical and exalted matters involving these horns, replete with sufficient citations to point the way for those who wish to pursue particular lines further. (Full disclosure: I an cited in the book as composer, writer and musicologist.) The level of musicality of the prose of these scholars varies. But the substance is consistently engaging and enlightening for those interested in the pursuit of what knowledge can be found about shofarot (yes, the plural shows the Hebrew name is feminine).

Although biblical passages mention two words with regard to the blowing of the shofar, Friedmann and Gereboff write, “the exact nature of the sound is not fully evident, nor is how the shofar should be sounded for the different occasions. No passages detail the species of animals for making a shofar. Rabbinic texts… [from earliest times] have developed and disagreed about various stipulations regarding the materials for the shofar, the specific character of the sounds, and the liturgical dimensions of its use. Moreover, local practices among different Jewish communities emerged.”

Jeremy Montagu provides a genial, scholarly and quite thoroughgoing amble through the biblical and historical sources. Sometimes the shofar is from a goat. But definitely it must be from a ram because it refers to the Aqedah (the binding of Isaac, stopped by the angel who directs Abraham to substitute sacrifice of the ram in place of his son). Classifying the shofar as a kind of trumpet (as opposed to that other, metal one), Montagu declares it is unknown which of the two was used in the time of the Temple to signal the sabbath or the holy days. But “by Talmudic times,” he writes, “it was certainly the shofar.”

Marvin A. Sweeney’s essay offers a catalogue of biblical shofar sound-cues — of war, warnings and worship. He addresses the emotional valence of the shofar, citing it both as a sound of joy — as in the Psalms — and also the various passages referring to fear and trembling — as in “Amos 3:6 ‘When a shofar is sounded in a town, shall the people not tremble?” The most famous combination of war, warning, and worship of course is causing the walls of Jericho to tumble down. May I interject here that the NPR program “Radiolab” had physicists calculate the shofar forces required here? (Miracle-spoiler alert: the sound, even if it were physically possible to gather sufficient numbers of shofar players within a reasonable amount of space to affect such force, the sound would have shattered their bodies too.)

The book’s wildest and most wonderfully wooly essay is written by Jeremy Philip Brown who delves into the shofar’s “medieval kabbalistic rituology” and explores the “theoerotic” nature of the instrument, dedicates his work in memoriam to Ornette Coleman while Haim Ovadia’s essay on Sephardic theology and mysticism notes the basic differences between Ashkenazi and Sephardic Jewish shofar traditions: The latter is more concerned with “trembling” in the presence of God.

Meanwhile, Malcolm Miller contributes the main essay on shofars and concert works. After crediting Ruth Smith, who discovered implied shofar calls in Handel’s “Saul,” he traipses through a whole host of other composers, crediting me for the discovery of the shofar call as the opening notes of (and actually the core inspiration for) Bernstein’s “West Side Story.”

He also cites two of my own compositions that include shofarot: “Night and Dawn” for the Royal Concertgebouw Orchestra Brass Ensemble, in commemoration of the anniversary of the liberation of the Netherlands from Nazi rule, and my concert-length Ceremonial for the Equinox, a spatially-conceived work whose conclusion is scored for shofar septet and bass drums. Particularly noteworthy among the included composers is Alvin Curran, who probably holds the world record of compositions with shofar. Then there is an opera by German composer Jörg Widmann, Babylon, which uses the shofar to “stand for the ancient, but also the primitive, the beast, the uncivilized.” Israeli composer Shulamit Ran, in her opera “Between Two Worlds (The Dybbuk),” describes writing for shofarot in the scene of the attempt to exorcise the spirit of the dead abandoned lover that had taken possession of, and residence in, his intended’s body.

The collection’s final essay, by Jonathan L. Friedmann, “From Stale to Silly to Sublime” concerns the shofar in comic books. In “‘Superman’s Pal Jimmy Olsen,” from 1964, for example, the titular cub reporter becomes ‘The Red-Headed Beatle of 1,000 B.C.!’“ and apparently plays Beatles songs on a shofar and hand drum while wearing a red mop-top wig (a plot point needed later). This comic would have us believe “that Beatles songs can be reproduced on limitedly musical instrument—represented with unflattering sound effects ‘Pwaah,’ ‘Oowah,’ and ‘Pwaahh.’”

Friedmann ends his survey with a different comic hero that is a total surprise: “The shofar gets its fullest comic book treatment through the character of Mal Duncan, the first black member” of D.C. Comics’ ‘Teen Titans,’” he writes. “After being knocked unconscious by an explosion, Duncan awakens to the eerie voice of Azrael, the angel of death, who has come to claim his soul. Duncan challenges Azrael to a fight. The angel Gabriel acting as ‘referee’. Gabriel blows his horn, infusing Duncan with super-strength to defeat the angel of death. Azrael declares ‘You beat me—so you live, for now! But I warn you, lose one fight—to anyone—and you die!” Gabriel gives Duncan the horn and tells him that blowing it will make him equal of any opponent. He reveals the shofar to Duncan in a quasi-mystical vision.” This vision draws not only Jewish, but also Islamic and Christian traditions.

The liminal sound of the shofar, between life and death; music or non-music; natural or human; the here-and-now or the mystical… Who will live, and who will die? That’s the realm of Qol Tamid.

A longer version of this review will appear in the annual publication of the Historical Brass Society.

Raphael Mostel is a New York-based composer and writer. Just before the pandemic his music was presented by the Berliner Philharmoniker in Germany and by the National Symphony Orchestra at the Kennedy Center in Washington, D.C.