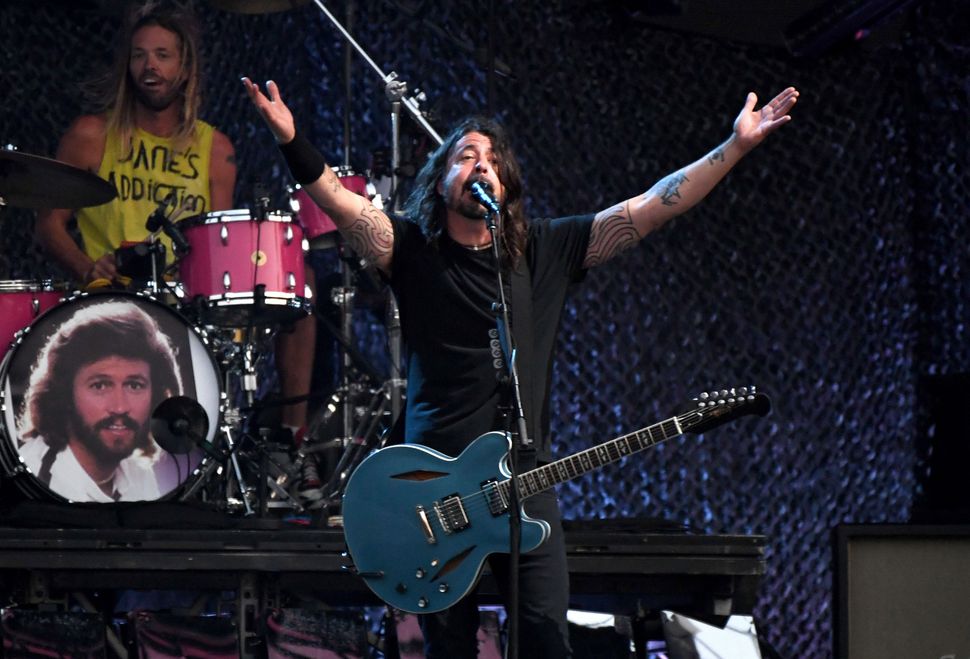 Last month, Dave Grohl invited 11-year-old drummer Nandi Bushell onstage at the Los Angeles Forum to play along on his group Foo Fighters’ signature tune, “Everlong.” For the past year or so, the two have been challenging each other in YouTube videos to see who is the better drummer. Grohl, who long ago won for Best Sport in the unofficial rock-star awards (The New York Times described him as “one of the friendliest people in music”), introduced the young drummer to the crowd at the Forum saying, “We’ve had the honor to jam with some pretty amazing people over the years. Some Beatles, some Stones, some Pink Floyds. But this one right here takes the cake.” Videos of the performance have made Bushell, a British musician of Zulu descent, a viral internet sensation.

Now past the quarter-century mark, Foo Fighters has far transcended its origins as a post-Nirvana solo project by Dave Grohl, who played drums for the short-lived but legendary grunge-rock band fronted by Kurt Cobain. These days, Grohl leads one of the biggest and most enduring rock bands in the world. And as they creep toward “elder alternative statesman” status, they begin to reap the rewards that await bands that maintain consistent success over a period of decades.

On Sept. 12, Foo Fighters will be honored with the Global Icon Award at the MTV VMAs (Video Music Awards), joining a rarefied collection of past honorees including Green Day, U2 and Queen. At the end of October, Foo Fighters will be inducted into the Rock & Rock Hall of Fame in their first year of eligibility; is already ensconced in the Hall of Fame by virtue of his membership in Nirvana.

Like Grohl, Foo Fighters’ guitarist Pat Smear worked with Nirvana, as a touring guitarist. Smear, a founding member of the legendary punk band the Germs, joined Foo Fighters early on, and except for a hiatus around the turn of the century, he has been a full-time member of the band for over a decade. At birth in West Los Angeles in 1959, Smear was given the name Georg Albert Ruthenberg by his mother, who is of African-American and Native American descent, and his German-Jewish immigrant father. As with many of his peers, Ruthenberg’s parents forced him to take piano lessons at a young age, but he couldn’t resist the lure of the guitar.

Smear is not the only member of the tribe in Foo Fighters. For a number of years, Rami Jaffee bounced back and forth between the Wallflowers, of which he was a founding member, and Foo Fighters. Jaffee began working with Foo Fighters in 2005 and became a full-fledged member of Grohl’s group in 2017 (a move which may or may not have inspired some of the more bitter songs by Jakob Dylan on the Wallflowers’ terrific new album, “Exit Wounds”).

Jaffee first met Dylan at the famed back room at Canter’s Deli called the Kibitz Room, in the Fairfax neighborhood of Los Angeles where Jaffe was raised by his Moroccan-born mother and his father, originally a Brooklynite of Russian-Jewish descent. Jaffee once told an interviewer, “I am a Woody Allen-type American Jew.”

Foo Fighters engaged the services of film and TV director Jesse Peretz, the son of publisher Martin Peretz and a descendant of Yiddish literary giant Y.L. Peretz, for the band’s early videos. Peretz first gained a modicum of fame as a bass guitarist and founding member of the Boston-based group the Lemonheads, before making the transition to working behind the camera. His film adaptation of the Nick Hornby novel “Juliet, Naked” premiered at the 2018 Sundance Film Festival.

Last December, Dave Grohl surprised fans with an unusual musical holiday project. Instead of the traditional Christmas song or album, Grohl and multiple Grammy Award-winning producer Greg Kurstin — who produced Foo Fighters’ albums including “Medicine at Midnight” and “Concrete and Gold — released eight covers of songs by Jewish artists. Grohl spilled the beans on Twitter, where he wrote (likely with the help of his Jewish pal, Kurstin): “With all the mishegas of 2020, Greg Kurstin & I were kibbitzing about how we could make Hanukkah extra-special this year. Festival of Lights?! How about a festival of tasty LICKS! So hold on to your tuchuses… we’ve got something special coming for your shayna punims.”

Fans were treated to eight new tracks — one for each night of Hanukkah — of Grohl performing songs by the likes of the Beastie Boys, Bob Dylan, Drake and Jewish-led groups including the Velvet Underground (Lou Reed), Elastica (Justine Frischmann) and the Knack (lead singer Doug Fieger).