Deep in the woods, where a terrifying real-life Holocaust fairy tale unfolded 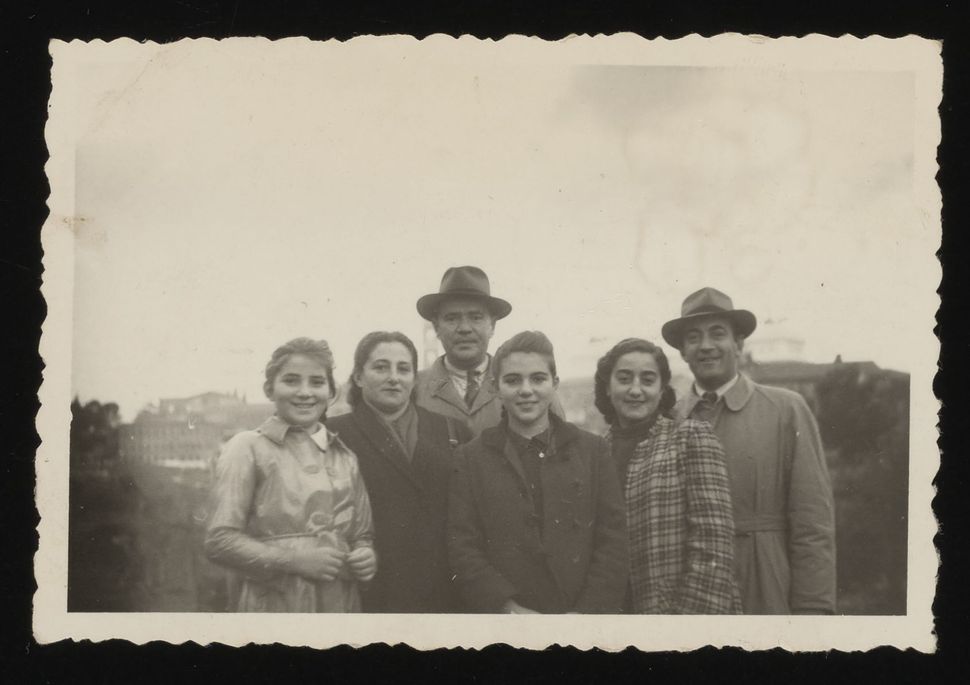 The Rabinowitz Family, circa 1948 Courtesy of St. Martin's Press

Into the Forest: A Holocaust Story of Survival, Triumph, and Love

In fairy tales, the woods are a place of enchantment, a dark realm whose surprises can quickly turn sinister. For the embattled Jews of Poland, fleeing Nazi genocide, they were a refuge that was also riddled with dangers.

Rebecca Frankel’s page-turning nonfiction narrative, “Into the Forest,” takes us deep into the “hauntingly beautiful” woods where the Rabinowitz family and other Jews confront (and sometime succumb to) harsh nature and man-made terrors. But that entirely compelling story is just the prologue to an even more improbable fairy tale about rescue, reunion and romantic love.

Frankel telegraphs her “miraculously happy” ending in the book’s opening pages, in which a university student has a life-changing encounter at a 1953 Brooklyn wedding. After that irresistible introduction, she flashes back to another wedding two decades earlier, in Vilna, between Miriam Dworetsky and Morris Rabinowitz. Miriam and Morris, “a genial carouser” who is also “sharp-witted and shrewd,” meet at a Socialist Zionist youth gathering. Miriam later describes the encounter as “love at first sight,” another fairy-tale trope.

The newlyweds settle in Zhetel, Morris’s predominantly Jewish hometown, where life had “a pleasing, reliable rhythm” and Frankel suggests that comity across social and cultural lines is the norm. Miriam runs a patent medicine shop; Morris works in the lumber business, learning the local forest and making friends nearby. They have two daughters, Rochel and Tania, and live happily, before history intervenes.

The history in question is all too familiar: World War II brings the Soviet invasion, with all its social upheavals, and then the even more brutal Nazi one. We know what will follow, or think we do. What distinguishes “Into the Forest” is the granularity and vividness of its storytelling – the product, in part, of Frankel’s close personal connection to her characters. 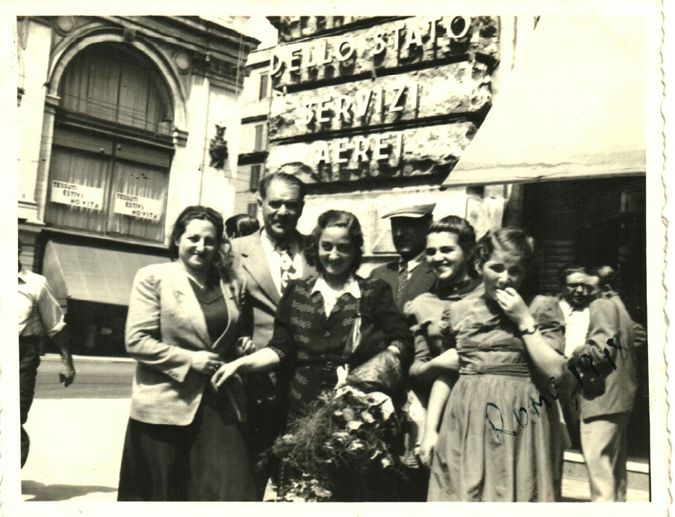 In Italy: The Rabinowitz family with cousins Solomon and Genia. Courtesy of Rebecca Frankel

During the tumultuous war years, the Rabinowitz family moves back and forth between Zhetel and the provincial capital of Novogrudek, where Miriam’s family lives. But once the Germans arrive, no place is safe. Frankel distinguishes between the regular army, whose soldiers are sometimes courteous, and the pitiless SS, charged with herding Jews into ghettos and conducting mass executions.

In Zhetel’s ghetto, where Frankel says the Jewish leadership is more protective than corrupt, an underground resistance coalesces. But the Nazis cultivate a “mentality of fear, submission and misplaced trust,” and betrayals undercut solidarity. Soviet partisans already have begun populating the forest, but they have little interest in saving Jews.

When the selections and executions start, a work pass or skill may offer temporary salvation. But for how long? One horrifying detail: The children of the ghetto, mimicking the murderers, play “selection” games, consigning each other to different fates.

During one actual selection, Philip Lazowski, an 11-year-old refugee from another town, is separated from his family. He discerns that children unaccompanied by parents are being sent to their deaths, and begs Miriam Rabinowitz, a stranger, to let him pass as her son. She agrees, and the ruse succeeds.

After more ordeals and a brief separation, the Rabinowitz family reunites, in the summer of 1942, in the vast forest spanning the borders of Poland and Belorussia. Frankel describes the woods rhapsodically as a place where “mighty trees stretched their formidable branches to touch the sky” and “deceptively deep water stranded oaks and old alder trees onto small orphaned islands in a maze of intractable marshland.”

But the protection the forest affords is limited. Life there would not exempt its inhabitants from “the war’s brutalities or the bare-knuckled survival required to endure it,” Frankel writes. The further they fled, “the more determined their hunters became to root them out.” 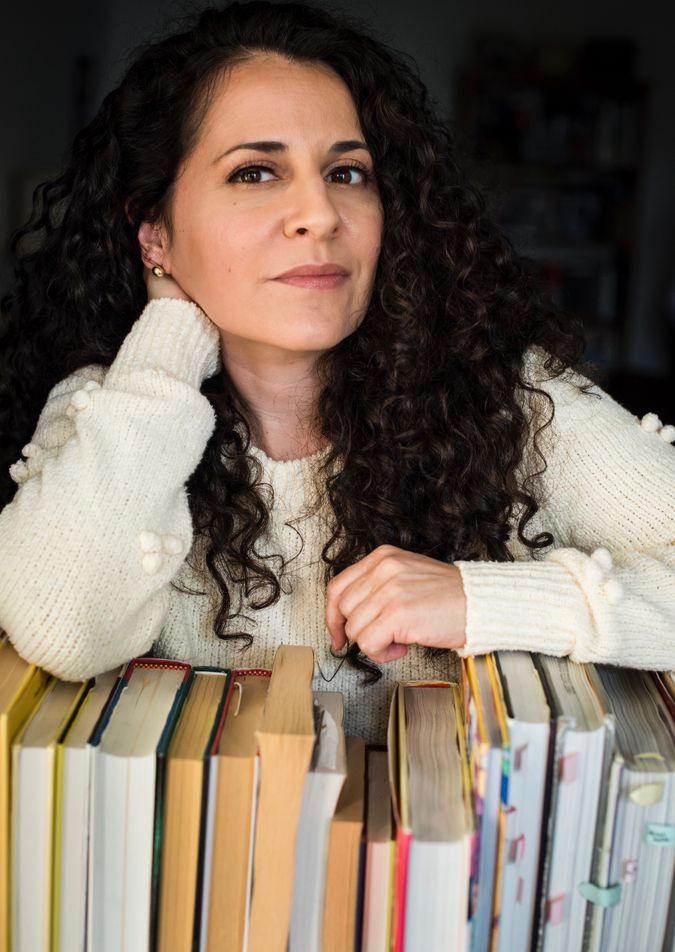 Rebecca Frankel: The author’s ‘Into the Forest’ is billed as a Holocaust story of survival, triumph and Love. Courtesy of St. Martin's Press

Some Jewish ghetto escapees join Soviet partisan units or form their own. (The Bielski brothers’ band, which both fights Germans and saves Jews, becomes the most celebrated.) But others, like the Rabinowitzes, gather in small family camps, aiming not for revenge but survival. They build shelters to withstand the winters, forage for food, and rely on friendly farmers to supplement their supplies. Lice, typhus, hunger, and bitter cold all threaten.

During periodic Nazi campaigns, the Rabinowitz family and their companions are forced to relocate to even more remote areas. Yet another horrifying detail: One SS commander involved in the hunt for Jews is so sadistic that other Nazi killing squad commanders call for his removal. How bad would he have had to be, one wonders, to have repulsed even his fellow mass murderers? His excesses notwithstanding, he keeps his job.

The Rabinowitz family endures many close calls. Miriam becomes deathly ill, but Morris nurses her back to health. At one point, Nazi soldiers walk across their well-concealed underground bunker, but they remain undiscovered.

Finally, the Soviets have the Germans on the run, and the surviving Jews are liberated. They walk back to Zhetel, where not much remains. In Novogrudek, the Rabinowitzes recover a few hidden valuables. In Lublin, they enjoy a small family reunion. Then, with guides, they make the arduous trek over the Alps to Italy, where they recuperate and dream of Palestine.

They end up instead in the United States, thanks to the sponsorship of Morris’ relatives. The two daughters, becoming American, change their names to Ruth and Toby. The past recedes – and then makes a welcome reappearance: The boy rescued from the selection will marry into the family.

Unlike many Holocaust survivors, and luckily for Frankel, the Rabinowitzes don’t shy away from their wartime memories. Miriam tells her grandchildren stories in which the woods become “a fantastical, faraway place where their parents and grandparents loomed as large as the trees – heroes in their family’s very own fairy tale.”

Deep in the woods, where a terrifying real-life Holocaust fairy tale unfolded