The sukkah at Linke Fligl. Image by Walter Hergt

If you arrived at Linke Fligl around 3 p.m. last Sunday and ambled into the tall grassy meadow at the heart of the farm, you would have seen something curious: A bunch of Jews squatting in patches of goldenrod, counting their blessings.

They — or rather we, since I was among them — were saying a not-so-traditional version of the Amidah, the silent prayer that anchors most Jewish services. Normally, congregants recite the 18 Hebrew blessings that make up the prayer. Instead, we’d been instructed to find a spot on the land that “spoke” to us and think of 18 things we were grateful for.

There was a lot on my list. For one thing, I’d successfully driven to this corner of the Hudson Valley without crashing on the Brooklyn-Queens Expressway. I was listening to hummed folk songs and softly crowing chickens instead of snippets from every car stereo passing by my apartment. And I was truly, actually, genuinely celebrating Sukkot, a holiday that, most years, passes me by completely.

When we made our way back to the farm’s outdoor “shul” — a chuppah-like structure with wooden posts and a breezy canopy — Rabbi Noam Lerman, who was leading mincha, invited everyone to share the blessings they’d reflected on.

That’s what preparations for Sukkot look like at Linke Fligl, a queer Jewish chicken farm nestled at the base of the Taconic Mountain Range outside Millerton, New York. Services there are a little unusual. But the team behind this project isn’t interested in conforming.

“What we’re hoping to do,” said Ollie Schwartz, a co-director on the farm, “is give people one version of what it means to live Jewishly in connection to the land.” 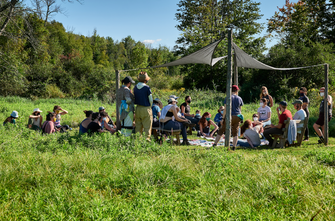 I had driven two and a half hours from New York City to lend a hand at Linke Fligl’s Sukkahbuild, which has been an annual event since 2016, when Margot Seigle co-founded the farm with their friend Adin Zuckerman. (Zuckerman is no longer on the Linke Fligl team.) A former public housing organizer with the permanent tan that comes from living outdoors, Seigle found their way to what they call “land-based” Jewish observance through Adamah, a farming fellowship hosted by the Isabella Freedman Jewish Retreat Center, located in nearby Canaan, Connecticut. But even as they found a permanent job at the retreat center and a home in the Jewish environmental community, Seigle wanted to see a more explicit focus on the needs of queer Jews.

“I felt like it would be powerful to actually have a space that was fully ours, where we could live more fully into our dreams together,” Seigle said.

Seigle found that space just about 15 minutes away from the Freedman Center. A 10-acre off-grid plot, Linke Fligl’s land lies on the property of WILDSEED, a larger farming community led by people of color. The land includes grassy meadows, a marshy pond, even a quarry for swimming. And the rolling hills visible in all directions appealed to Seigle.

“There was something about the landscape, of being held between two mountains and looking into this valley,” they said. “You’re very held, and it’s very enclosed, but then it’s such an expansive landscape.”

Six years later, the farm boasts an outdoor kitchen, a converted school bus and a coop housing 80 rather well-behaved chickens. In a crowded garden, vegetable staples like potatoes and kale contend with fanciful crops like elderberries and chestnuts.

Seigle named the farm Linke Fligl, a Yiddish phrase that translates to “left wing,” as a tribute to its signature fowl and a gesture to its political values. The staffers who spoke to me were deeply skeptical of the idea that Jews should find connection to the land through Israel. They described the farm as a diasporist project aiming to help American Jews connect deeply to the lands where they live — while also grappling with the dispossession and land theft at the core of this country’s history. Linke Fligl pays a 10% land tax on all sales and programs fees to the Schaghticoke First Nations, who historically lived in the Hudson Valley, and asks donors to match all gifts with an equivalent contribution to a Black or indigenous land fund. 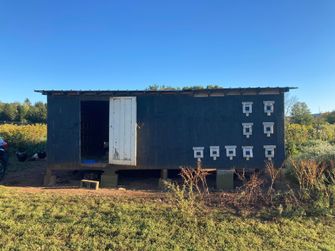 Home of the titular chickens. Image by Irene Connelly

“We believe in land-based liberation for Jews and queer Jews, and part of that is investing in liberation for other land-marginalized peoples,” co-director Sol Weiss told me.

In a normal, non-pandemic year, the farm plays host to visitors and volunteers all year long. Queer college students host retreats on its premises. Local neighbors show up for garden work days followed by text learning. For years, the farm has hosted one of its biggest events on Sukkot, when dozens of guests come to camp and celebrate for several nights. Last year, of course, that didn’t happen. But now, the crew at Linke Fligl is ready to (cautiously) party.

When I arrived midway through lunch, a morning work party had already erected the sukkah’s circular wooden frame, and some 20 masked volunteers were enjoying a postprandial lounge. I scarfed down some homemade nettle pesto and shredded chicken (most Linke Fligl fowl meet their ends at slaughterhouse off the premises, but some are slaughtered kosher-style on the land) while surveying the crowd: multiple Oberlin t-shirts, plenty of tie-dye, lots of cool cargo pants sensibly tucked into tall socks. Most of the attendees were millennials, but there were some exceptions: One grey-haired participant sported a t-shirt emblazoned with the acronym CLAWS. (“Cat Lovers Against White Supremacy.”) 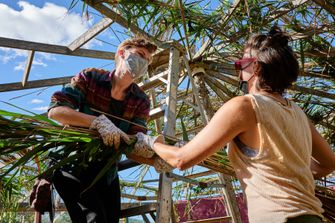 When lunch ended, it was time to work. Chana Rusanov, one of the farm’s co-directors, handed me a machete — a small one, yes, but still an actual machete — and dispatched me to harvest the tall reeds that would form the sukkah’s roof. I worked alongside a sixth-grade teacher and Lerman, the newly-minted rabbi who would later lead afternoon services, all of us hacking away to the sound of someone singing folk songs in the meadow. None of us really knew the correct way to harvest reeds, but we sensed it didn’t matter.

By the time we returned to the field, others had tacked naturally-dyed canvas walls to the sukkah’s frame. After we spread the reeds over the beams, guests took turns hanging handmade ornaments and mantras on the roof. “I love being a gay trans Jew,” read one piece of cloth fluttering in the breeze.

For Linke Fligl devotees, this work is in itself a kind of worship. “When Judaism is practiced in a context that’s divorced from the land, it feels very hard for me as someone who connects to the divine through cultivating and harvesting,” said Weiss.

And for some guests, it’s just less intimidating than attending synagogue. Nellie Ostow, 26, started coming to Linke Fligl over the summer as a way of reconnecting with her Jewish roots, and was celebrating her first Sukkot on the farm this year. She’d considered seeking out a synagogue, but found this more accessible. “I was just struck with the power of singing and praying together,” Ostow said. “I feel comfortable here, even if I don’t know many people.”

One of Sukkot’s central themes is the impermanence of human endeavor. When we eat beneath the stars, subject to the whims of nature, it’s easy to see how fragile the patterns of our lives are. This year, the message feels especially poignant: At the end of 5782, Linke Fligl will be closing up shop, returning the land and the structures they’ve built to WILDSEED. Paradoxically, the farm’s growth in popularity has created more demand for events and programming than its team can comfortably handle. But, leaders said, it feels impossible to expand without fundamentally altering the character of the project. 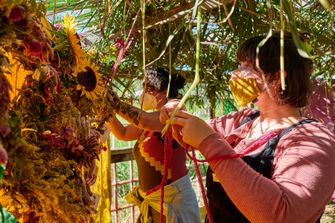 Volunteers decorate the sukkah with flowers. Image by Walter Hergt

“Making the decision was really hard, and it’s clear that it was the right decision,” Seigle said. “It would have been an overextension to try to continue.”

But there’s a whole year left before the tent poles come down. In the meantime, it was time to dance.

With the sukkah finished, Seigle took up their fiddle. Someone else sat down on an improvised cajón and struck up a beat. A singer wearing a boiler suit and magenta horn-rimmed glasses strummed a silver guitar and belted out Yiddish drinking songs. The guests marched in circles and danced the hora. Even I, standing on the sidelines and dutifully jotting down details, got twirled around, swing-your-partner style.

People who had told me earlier that they were visiting for the first time were holding hands like old friends, and as I watched them I remembered a moment from earlier in the day, between work and the mincha service. One of my co-harvesters offered to check my head for ticks, which are rampant in this part of New York, and so I found myself bending down, in a crowd of people I didn’t know, while a total stranger carefully examined my hairline.

It was a moment of grace on an ordinary Sunday afternoon. It was “strangers feeling familiar.” It felt like a gift.