Just as a Jewish humanist told us in ‘Foundation,’ our problems will be over in 10,000 years 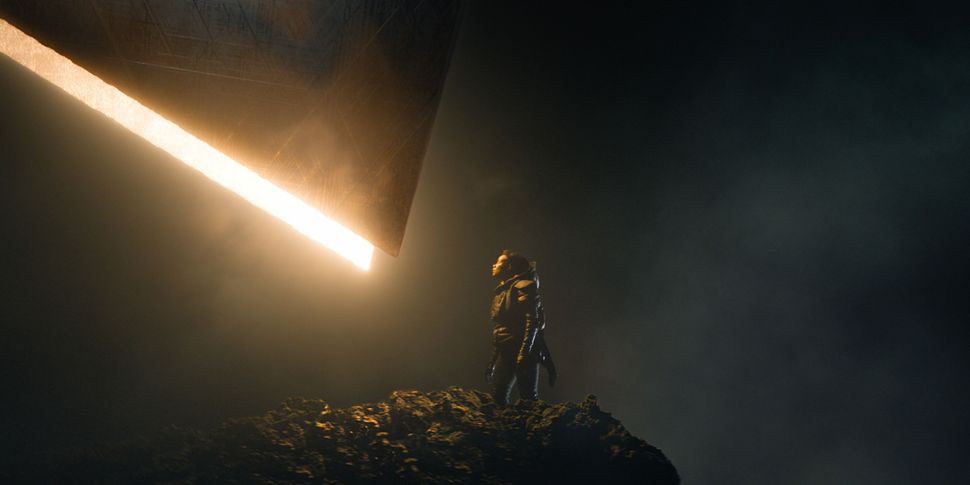 No one can remember a time when we were more politically polarized. Discussions of immigration, foreign policy and COVID all generate, as they say, more heat than light. But as we cast around for ideas on how to handle difficult topics such as whether to mandate masks and vaccines, maybe we should look to Hari Seldon for advice.

True, mathematical prodigy Seldon will not be born until 11,988 GE (Galactic Era). Luckily, we know about him from the prolific and prescient science fiction writer Isaac Asimov. Asimov, a proudly Jewish humanist, was born to Russian Jewish millers Anna and Judah on an unknown date in 1919 or 1920.

It is a great distance from then to the Galactic Era. But in that distant future, as Asimov explains in his “Foundation” trilogy (written during 1951-1953 and now streaming as a series on Apple TV+), Seldon lives within the flawed but still civilized and civilizing Galactic Empire. Realizing that this empire is faced with inevitable and imminent collapse, he devises and sets in motion a multi-century plan – the Seldon Plan. This will greatly diminish the number of years that humans will need to spend in post-apocalyptic ignorance and suffering.

Seldon’s ability to nudge events in a desirable direction is based in his discovery of psychohistory, which functions via simulations operating on laws guiding the behaviors of large societal groups and forces.

More than just a view from 30,000 feet, psychohistory offers a view from nowhere. In other words, it requires us to shoot out into space and look at our situation as a vast totality. It promotes a detached or clinical view of the forces interacting within and around us. In a sense, the view from space enables and even requires us to set aside our emotional attachments, even our natural tribal identities which mean so much to us on a day-to-day basis.

Though he wrote in the past about the future, perhaps Asimov’s concept of psychohistory can help us glimpse a useful approach to our present challenges.

When we look at, say, where to mandate vaccines, what do we see from this distant vantage point? We see clashing groups, each consisting of large numbers. Each group inhabits an almost hermetically sealed container with its own infosphere. Each is seemingly convinced of its righteousness. But, viewing these groups from far away, we (at least temporarily) do not identify with one or the other; we (at least temporarily) feel no impulse to cast blame or responsibility.

So our question from space resolves into “Taking completely for granted the situation as we see it, what should be done as far as vaccine mandates?” The answer may be something other than a straightforward endorsement or prohibition. Consider nursing homes. President Biden has mandated vaccines for the ones that receive federal funding. Obviously, it is better for both patients and staff if all nursing staff is vaccinated.

But what if a mandate actually degrades the ability of the facility to aid its patients? That this is a real possibility was pointed out by Pete Van Runkle, executive director of the Ohio Health Care Association. Almost half of staff are estimated to be unvaccinated, and many “are strongly opposed to being vaccinated and are unlikely to respond positively to a mandate,” said Runkle, “placing the facility in the untenable position of choosing between losing staff or facing federal penalties.”

To this difficult situation, add the complicating truth that unvaccinated care takers, released because of the mandate, will not be able to find work in a hospital or another nursing home.

In psychohistorical terms, we can reframe our question as: “Given 1) the predictable behavior of this large group of unvaccinated people and 2) the fact that nursing homes may suffer serious service shortages to the likely detriment of patients, should we moderate our stance on mandating staff vaccines?” Here we put aside any and all considerations of the rightness or wrongness of the beliefs of those who choose to remain unvaccinated. Rather, the sole focus is on best outcomes for all.

If the proper parties balance risks rather than judge motivations, they might choose not to mandate so that staff will not be forced to quit. The remaining and already stressed team members will be less likely to be stretched beyond their physical and psychological capacities, patients will be more likely to receive the accustomed level of care, and the unvaccinated will not lose employment.

Or, if the contagion is judged to be the overriding issue (this seems like the most likely outcome), mandates in nursing homes will in fact be pursued. But that decision will be made with the full awareness of its ramifications. Negative consequences will be anticipated and accommodations made — one-on-one discussions with and incentives for vaccine-hesitant staff; resources for families of patients in nursing homes where low staffing occurs; incentives for new caretakers; job retraining for those who choose to quit.

We seldom turn for guidance to a fictional, futuristic figures like Seldon. That’s probably wise since some of the particulars of that future as Isaac Asimov detailed it are seemingly unlikely to transpire, such as the miniaturization and widespread use of nuclear reactors in homes and offices or atomic-powered ashtrays into which one can flick cigar embers and watch them vaporize into nothingness.

But however wrong he may turn out to have been in the specifics, with psychohistory Asimov seemingly correctly anticipated the advent of Big Data, where the laws of large numbers can be discerned and where the nature of interacting societal forces is simply accepted. President Biden, the ACLU, and the media are increasingly supportive of mandates. Nevertheless, whenever we’re thinking about a topic about which not everyone agrees, a little psychohistory could be useful.

George M. Alliger is a work psychologist based in Houston and a fellow of the Society for Industrial and Organizational Psychology. His forthcoming book is titled “Anti-Work: Psychological Investigations into Its Truths, Problems, and Solutions..

Just as a Jewish humanist told us in ‘Foundation,’ our problems will be over in 10,000 years