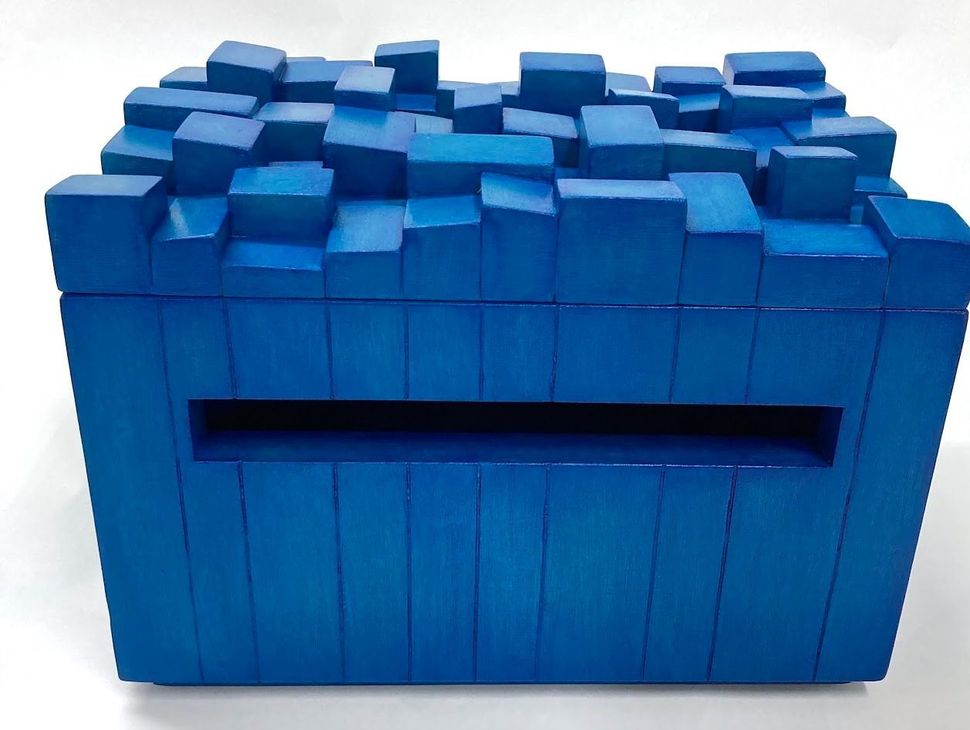 What does tikkun olam look like? On Yom HaTzedek, a new holiday that falls on Pesach Sheni, it looks like a box. For Tobi Kahn, the renowned painter and sculptor, that box looks like a city awash in deep blue, its interior reflecting the heavens, its slot like a mailbox to God.

On a Wednesday livestream for Manhattan’s Central Synagogue, Kahn will unveil his version of a Tzedek Box, “ZAHRYZ,” (derived from the word “Tzedek” and the Hebrew word “zerizut” or zest), a meticulously-constructed wooden structure made to look like a piece of found art. Kahn’s is the most high-profile addition to a major ritual of Yom HaTzedek, the opening of the Tzedek Box, which collects slips of paper recording acts of tzedek — or justice — performed throughout the year.

“We are seeking to make Yom HaTzedek, and Tzedek Box, a household ritual,” said Andrew Mandel, the founder of Tzedek Box, which challenges people to make their own box from whatever materials they have handy. “One of the steps is to elevate it, and to work with the most talented and renowned people in the Jewish world — collaborate with them to see what ideas come from that collaboration and see if we can institutionalize it in a way that inspires reflection and action toward a more just world.”

Kahn, 69, has been making ritual Jewish objects for his family since he was a child — over Zoom he showed me his recently-constructed lulav holder and a Kos Shel Eliyahu — but only began displaying them in 2000.

“People always assumed that I would make Judaica because I was frum,” said Kahn, who was raised Orthodox and studied Gemara at Yeshivat Har Etzion in Israel. Kahn wanted to be known as an artist first, but his mentor, MoMA curator Peter Selz, convinced him to make his private work public.

“He goes, ‘If you don’t show your ceremonial objects publicly, people will say that you’re ashamed of your heritage,’” Kahn recalled. That changed the equation, and the show of Kahn’s toured for nine years in mostly non-Jewish spaces. His Omer Counters now live in museums across the country. 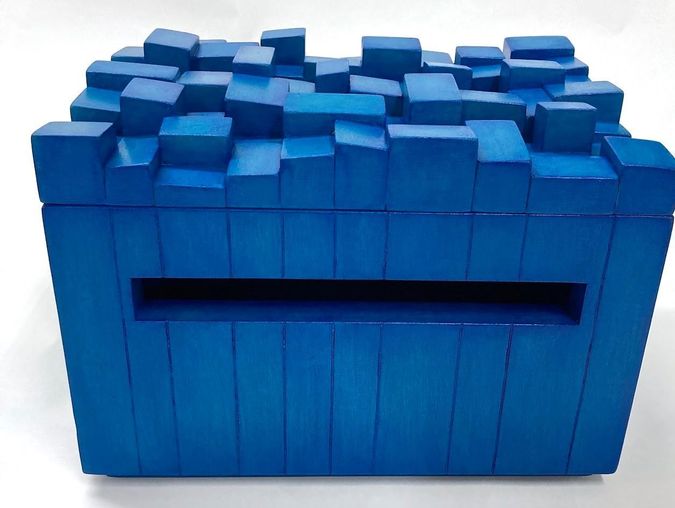 The finished product — one of seven boxes, for each day of the week — has 70 cube-like outcroppings on its lid for the biblical 70 nations of the world. Its contours suggest an old city, a reminder of the Yom HaTzedek’s civic-mindedness, and its slot is wide enough to accommodate a standard-sized sheet of paper, either folded or flat. The rich blue paint is meant to suggest bein hashmashot — twilight. 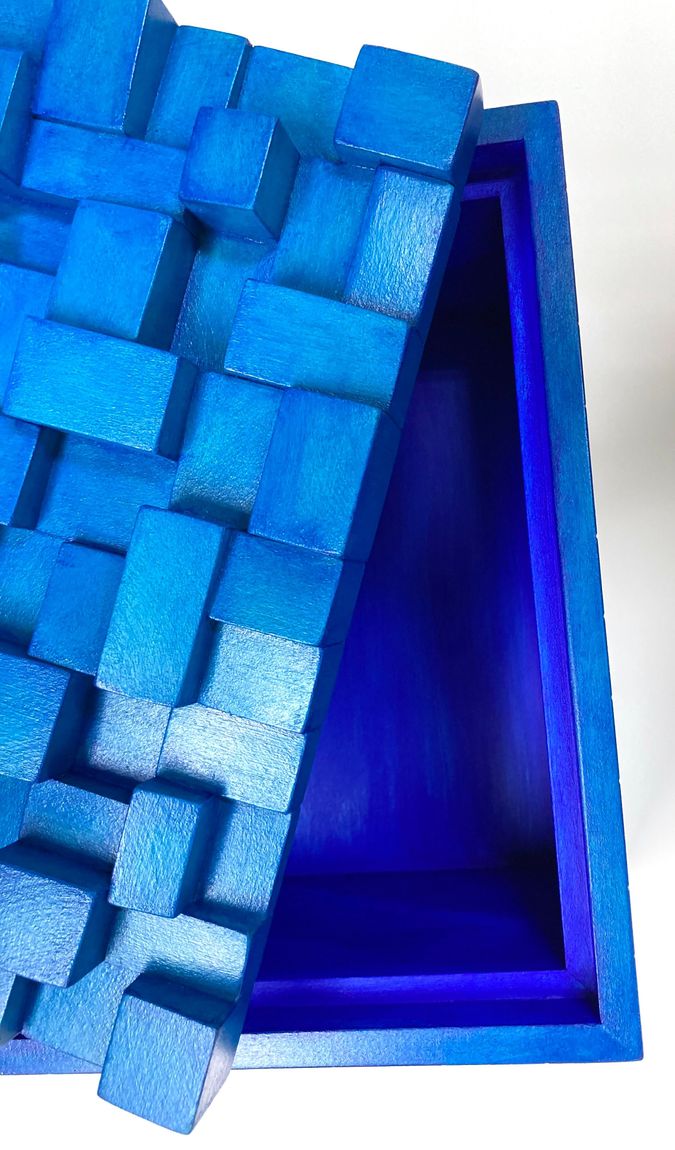 The interior color of the box is meant to represent the shamayim and the sea. Image by 2021 ©Tobi Kahn

But Kahn also drew his inspiration from an urgent question of justice: climate change. The paint suggests coral blue, as seen from underwater. The wood, covered with translucent glazes, speaks to the effort to protect our fragile planet. In the spirit of the Tzedek Box challenge, Kahn welcomes viewers who may encounter the work at a museum, to follow him in hiddur mitzvah, the beautification of a mitzvah. If they want, he said, they can print a high-res image of his own box and attach it to a cookie jar.

The “ZAHRYZ” Tzedek Box further establishes Kahn as an artist whose work reflects rituals new and old. In addition to his Torah arks and Tu B’Shvat Seder plates, Kahn has made secular works reflecting on miscarriages and 9/11. And while he doesn’t think of the works in relationship to each other, or a hierarchy of Judaica, painting or sculpture, he does believe in a theme.

“All my work is made in the honor of God,” Kahn said.