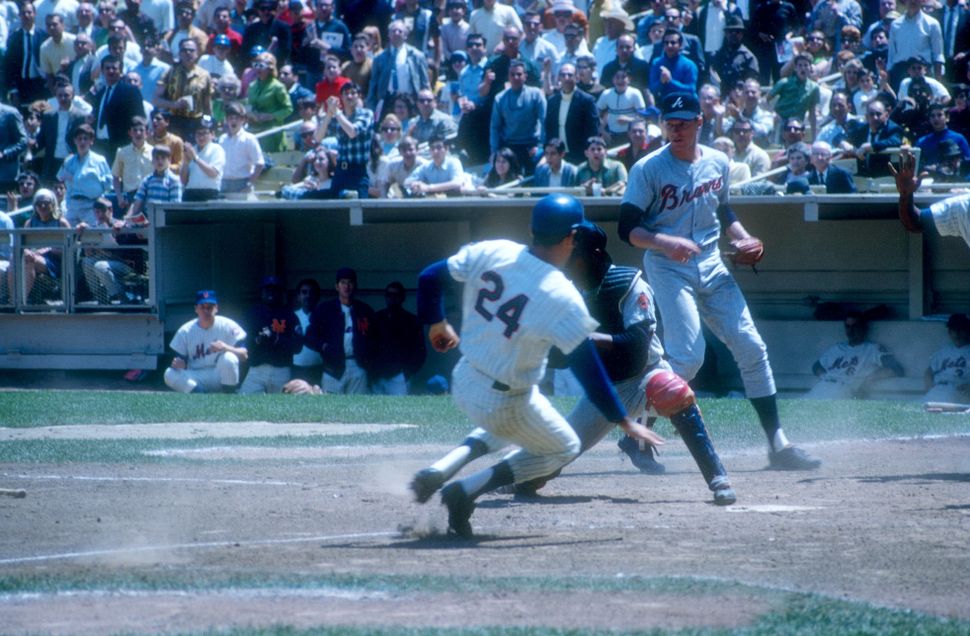 Ah, October — when Jewish holidays, fall colors, Halloween and the baseball postseason combine to make for a particularly festive time of the year.

Of course, when we think of Jewish baseball heroics in October, we immediately (and understandably) think of Sandy Koufax. But while the “Left Arm of God” certainly ranks high on any list of incredible World Series performances, Koufax is hardly the only member of the tribe to make a memorable mark in the postseason. Here then, more or less in ascending order of greatness, are a dozen enduring October performances by Jewish MLB players.

Here’s a great trivia question: Who was the first Jewish pitcher to appear in a World Series? The answer is Philadelphia Phillies hurler Mayer, who also made history in 1914 by winning 21 games, thereby becoming the first Jewish pitcher to hit the 20-victory mark. In 1915, he repeated that feat and achieved further immortality by starting Game 2 of that year’s World Series. Mayer pitched a tense complete game duel against Boston Red Sox starter Rube Foster, striking out seven and giving up his only earned run in the top of the 9th. when Foster singled in a run to break the 1-1 deadlock. Though he went home with the “L,” Mayer’s impressive performance on the game’s biggest stage was a source of pride for Jewish baseball fans everywhere.

Known more at the time for his glove (and hunky good looks) than his bat, Houston Astros catcher Brad Ausmus hit the biggest homer of his career in Game 4 of the 2005 National League Division Series. With two outs in the bottom of the 9th, and the Astros trailing the Atlanta Braves 6-5, Ausmus lined a 2-0 pitch from Kyle Farnsworth just over the yellow “home run” line on the left-center wall of Minute Maid Park. The blow not only tied the game, but it set the stage for the Astros’ series-clinching 18-inning 7-6 victory, which put the franchise on the path to its first-ever World Series appearance. 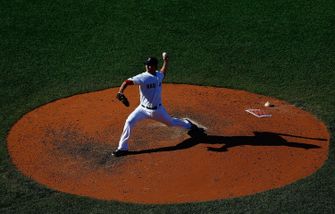 Left-Handed Reliever: Craig Breslow came out of the Red Sox bullpen to earn the win in Boston’s series-clinching Game 4 victory over the Tampa Bay Rays in the 2013 ALDS. By Getty Images

Left-handed reliever Breslow came out of the Red Sox bullpen to earn the win in Boston’s series-clinching Game 4 victory over the Tampa Bay Rays in the 2013 ALDS, and he did it in style. Replacing starter Jake Peavy in the bottom of the 6th with two outs, one on and his team down 1-0, Breslow proceeded to strike out four straight batters in the heart of the Rays’ order — first fanning James Loney to end the 6th, and then (after the Red Sox took a 2-1 lead in the top of the frame) punching out Evan Longoria, Ben Zobrist and Desmond Jennings in the bottom of the 7th. 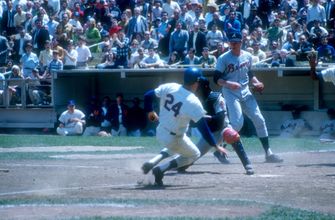 Despite suffering all season from a slipped disk that brought him constant pain (and caused one doctor to tell him he might never play again) New York Mets fan favorite Shamsky hit .300 as a left-handed platoon outfielder in 1969, and then really turned it on in time for his team’s NL Championship Series against the Atlanta Braves. Shamsky led all players in the three-game series with seven hits and a .538 batting average, as the Miracle Mets swept the Braves and advanced to their fateful World Series showdown with the Baltimore Orioles.

Immortalized in “Moneyball” as “The Greek God of Walks” for his innate ability to draw a base on balls, Youk (not actually Greek but very definitely Jewish) was all about making contact during the 2007 American League Championship Series; he knocked a LCS record-tying 14 hits off the Cleveland Indians’ pitching staff, helping the Red Sox take the series in seven games on their way to crushing the Colorado Rockies in the World Series. Youkilis finished the series with three home runs, seven RBI and a monstrous .500/.576/.929 slash line; he also walked five times, presumably because he had a reputation to uphold.

While Los Angeles Dodgers outfielder Pederson batted only .190 during the weird, pandemic-shortened 2020 season, he somehow totally got it together in time for the postseason. After going 2-for-3 with a key two-run single against the San Diego Padres in the series-clinching Game 3 of the NLDS, he batted .389 with seven hits, a home run and three RBI against the Braves in the NLCS, then went 4-for-10 against the Rays in the World Series, including a solo homer that would eventually prove to be the winning run in the Dodgers’ 4-2 Game 5 victory. In all, Pederson hit .394 for October, helping the Dodgers bring home their first World Championship trophy since 1988. 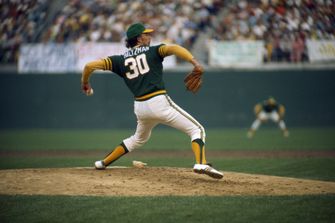 Here’s another great trivia question: Who is the winningest Jewish pitcher of all time? Most people will say Sandy Koufax, but Ken Holtzman is the correct answer, having won seven more regular season games (174 to 167) than Koufax. Holtzman was a valuable postseason asset as well, helping pitch the Oakland A’s to three straight World Championships, winning six games and posting a 2.30 ERA in 13 playoff and World Series appearances from 1972 to 1975. In 1974, the lefty threw a five-hit shutout against a tough Baltimore Orioles squad in Game 2 of the ALCS, then (following a difficult start in Game 1) beat the Dodgers 5-2 in Game 4, helping his own cause with a solo home run off of L.A. ace Andy Messersmith.

After hitting .321 in the 1934 World Series (which his Detroit Tigers lost in seven games to the St. Louis Cardinals) and missing most of Detroit’s 1935 World Series victory over the Chicago Cubs due to injury, “The Hebrew Hammer” came on like a one-man wrecking crew when the Tigers met the Cincinnati Reds in 1940. Greenberg led all players in the Series with 10 hits, and in Game 5 drove in four runs with a home run and a sacrifice fly to give the Tigers a 3-2 advantage in the Series. But despite Hank’s plate heroics, the Reds came back to take it in seven games. 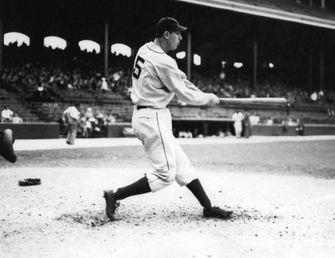 Decorated Vet: Discharged from the Army Air Corps just 3 and a half months prior, Greenberg was positively explosive during the Detroit Tigers’ return to the World Series, By Getty Images

Discharged from the Army Air Corps just 3 and a half months prior, Greenberg was positively explosive during the Tigers’ return to the World Series, leading his team with seven hits, three doubles, two home runs and seven RBI while also tying for the lead with 7 runs scored. (His .304/.467/.696 line wasn’t too shabby, either.) The future Hall of Famer’s last swing of Game 7, a sacrifice fly off of Cubs hurler Claude Passeau, put the final nail in Chicago’s coffin as the Tigers clinched the World Championship with a 9-3 victory. 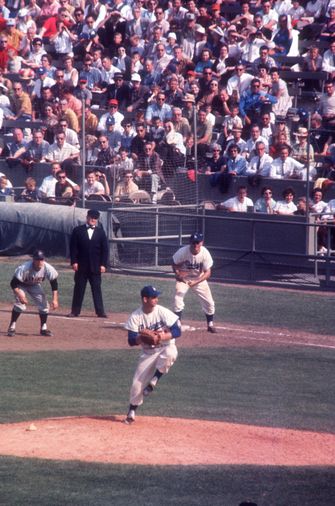 Here’s a third trivia question that’s sure to win you a beer or a bagel or whatever you care to wager: Who was the first Jewish player to be named World Series MVP? Again, odds are good that you’ll get “Sandy Koufax” in reply, but in fact it was actually Dodgers hurler Larry Sherry. Though the rookie right-hander had gone 7-2 with a 2.19 ERA in 23 appearances (9 starts and 14 in relief) since joining the team in July 1959, no one expected him to play such a dominant role in that year’s World Series. But Sherry wound up having a hand in all four of the Dodgers’ victories over the Chicago White Sox, saving Game 2 and Game 3, and then notching relief wins in Games 4 and 6. He allowed only one earned run in 12 2/3 innings, scattering eight hits and walking only two batters, while striking out five; he also went 2-for-4 at the plate.

Dodgers ace Koufax came into the ’63 World Series as the National League leader in wins (25), ERA (1.88), strikeouts (306) and shutouts (11); but even so, the New York Yankees weren’t expecting him to be quite as formidable an opponent as he proved. After tying a World Series record by striking out the first five batters he faced, the left-hander fanned ten more — for a single-game World Series record of 15 — while cruising to a 5-2 Game 1 victory over the defending two-time world champs. Four days later, he outdueled Whitey Ford to a 2-1 win, striking out eight and walking none as the Dodgers completed their surprise sweep of the Bronx Bombers. Koufax was named the World Series MVP for what might still be the greatest World Series performance of all time by a Jewish player, if only he hadn’t returned to the “October Classic” in 1965… 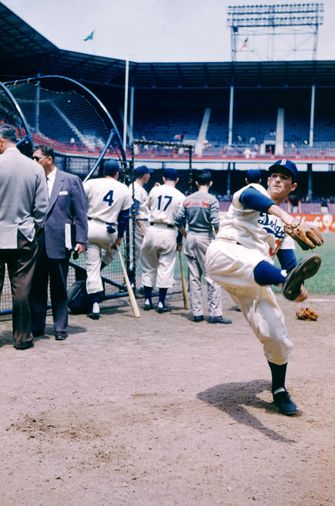 After once again winning the NL pitching triple crown in 1965 by winning 26 games, posting a 2.04 ERA and setting a modern-era single-season record with 382 strikeouts, Koufax made additional headlines (and further endeared himself to Jewish fans) by refusing to pitch the opening game of the World Series due to its convergence with Yom Kippur. Though the Minnesota Twins managed to beat him in Game 2, Koufax got his revenge by hurling two straight complete-game shutouts in Game 5 and Game 7, the latter thrown on just two days’ rest. He finished the Series with a 0.38 ERA, having allowed only one earned run in 24 innings while racking up 29 strikeouts — numbers made all the more impressive by the fact that Koufax was basically running on fumes at this point. He was once again named the World Series MVP, making him the first player to receive the award twice; to date, only fellow Hall of Famers Bob Gibson and Reggie Jackson have matched that feat.