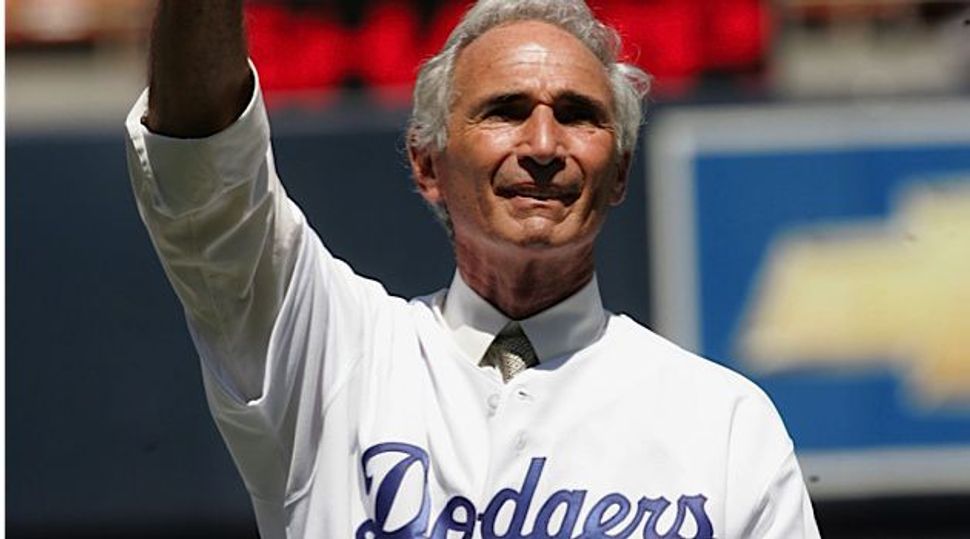 The Right Hand of God: Koufax salutes the crowd. Image by Getty Images

1) September 9, 1965: Koufax pitches a perfect game (no hits, walks or errors) against the Chicago Cubs at Dodger Stadium, and sets a record for the most Ks in a perfecto by striking out 14 batters. The victory gives Koufax four career no-hitters, the most by any major league pitcher at the time.

2) October 14, 1965: Just three days after pitching a four-hit, complete-game shutout against the Minnesota Twins in Game 5 of the World Series, Koufax shuts them out again in Game 7, giving the Dodgers their second world championship in three years.

3) October 2, 1963: Koufax breaks Carl Erskine’s mark by striking out 15 batters in a World Series game, as the Dodgers beat the New York Yankees 5-2 in Game 1 of the Fall Classic. (Four days later, he’ll pitch another complete-game victory to give the Dodgers a Series sweep.)

4) October 2, 1965: Koufax clinches the National League pennant for the Dodgers with a 3-1 complete-game victory over the Milwaukee Braves in the penultimate game of the 1965 season. Koufax’s 26th win of the year (against only eight losses) drops his ERA to 2.04, and his 13 strikeouts give him a major league record of 382.

7) September 27, 1961: Koufax whiffs seven Phillies in his final start of the season, bringing his season strikeout total to 269, which breaks the NL record of 267 set by Christy Mathewson in 1903.

8) May 11, 1963: Koufax strikes out four Giants, walks two and gives up zero hits while hurling the second no-hitter of his career at Dodger Stadium.

10) October 6, 1965: Putting his faith above his sport, “The Left Arm of God” declines to pitch the opening game of the World Series in observance of Yom Kippur.