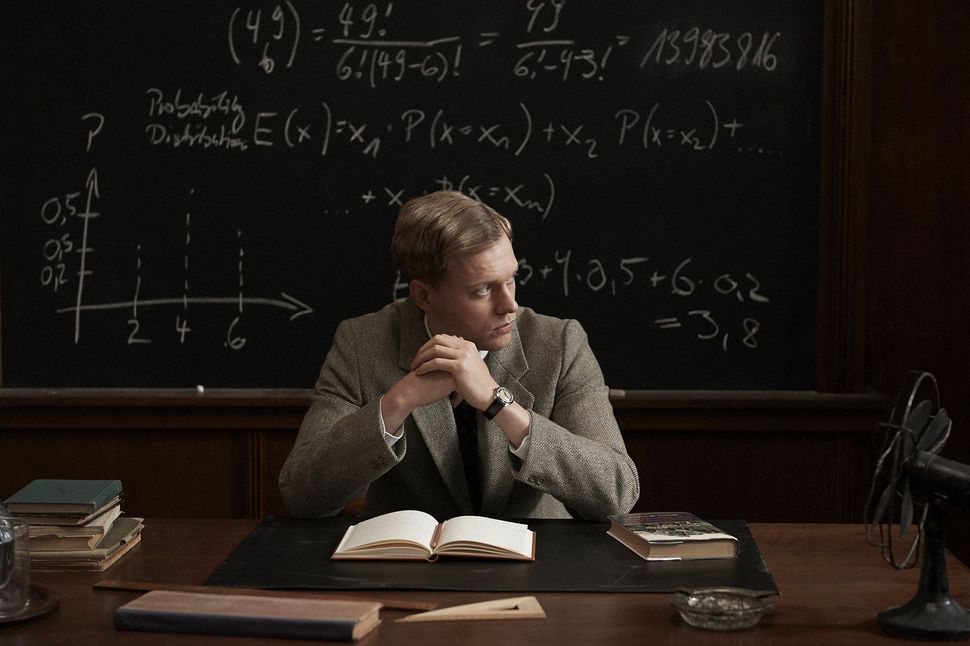 Another Beautiful Mind: Philippe Tlokinski plays Stan Ulam in ‘The Adventures of a Mathematician.’ By Samuel Goldwyn Pictures

In the pantheon of films about real-life mathematicians — think Alan Turing in “The Imitation Game,” Stephen Hawking in “The Theory of Everything,” or even John Nash in “A Beautiful Mind” — Stan Ulam, the title character in “The Adventures of a Mathematician,” falls a tad short. Perhaps comparisons are unfair. After all, Turing (Benedict Cumberbatch), Hawking (Eddie Redmayne), and Nash (Russell Crowe) were iconic figures even before they were immortalized on film.

Writer-director Thor Klein had his work cut out for him — he needed to create a compelling character without deviating from the facts of the story (a challenge for the maker of any biopic). And so did Philippe Tlokinski who plays the little-known 30-year-old Polish Jewish mathematician.

The movie is based on Ulam’s readable memoir (same title), which leaves many questions unanswered. The film is frustrating; while it boasts many arresting moments, there are gaps in the narrative.

Here’s what we know: In 1942, Ulam immigrated to the United States, first to teach mathematics at Princeton, later Harvard, and along the way he was recruited by the Manhattan Project, a top secret organization that was building the atomic bomb. A number of Eastern European Jewish mathematicians were on board, believing their mission was a major step in defeating Nazism. Among them was Edward Teller (Joel Basman), played here as an almost demonic figure with bushy black eyebrows, who was passionately attached to the atomic bomb and its potential capability for global destruction. Teller served as the model for Stanley Kubrick’s scientist (Peter Sellers) in his 1964 satire “Dr. Strangelove.”

Based in Los Alamos, New Mexico, the Manhattan Project continues to inspire movies, novels and comic strips, and its mission’s value is debated to this day. Einstein himself said that he made a mistake when he urged Roosevelt to build the bomb. In Klein’s film Teller and Ulam are at constant philosophical and ethical loggerheads with each other.

Ulam is a bit of a charmer, a card shark and given to sly jokes: “Why can’t Jesus be a Hungarian? Because in Hungary you can’t find three wise men or a virgin.” He is a devoted husband, father, and good friend to John von Neumann (Fabian Kociecki), another math genius and Jewish refugee who played a major role on the Manhattan Project.

The movie does not make clear who Ulam is. Even more puzzling is Ulam’s troubled relationship with a younger brother, Adam (Mateusz Wieclawek), a Harvard student, who accused him of abandonment and ultimately proclaimed he wanted no further ties with either Stan or Judaism. Although excessive exposition can be problematic, still, we needed some backstory. 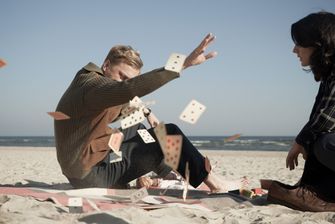 On the Beach: Towards the end of ‘Adventures of a Mathematician,’ mathematician Stan Ulam frets, ‘All I created in life is burnt sand.’ Courtesy of Samuel Goldwyn Pictures

The film is more successful in its evocation of Ulam’s unseen family who remained in Poland as the Nazis invaded the country. At various points Ulam is seen on a pay phone, calling Poland, dropping coins into the slot as he desperately tries to help his sister and parents (who think it will all blow over) find ways to escape. We later learn his beloved sister was killed attempting to flee.

The nub of the story is of course Ulam’s profound ambivalence about his work, especially after the Nazis have been defeated and the war is over. It’s the source of many onscreen feuds among the Manhattan Project scientists. Some scientists, ashamed of their contributions, jumped ship. Another became a Russian spy, though much more elaboration was called for here. He’s far too forgettable.

In one effective scene, Ulam debates with his pregnant wife (nicely played by Esther Garrel) the virtues of building an even more destructive bomb. Gently voicing early feminist and pacifist views, she wonders why she should have a baby in a world striving to create a killing machine that would make what happened in Hiroshima and Nagasaki seem small by comparison. On some level Ulam agrees with her and struggles with that inner torment. Yet, after the war is over, he returns to Los Alamos to work. Why he does so remains unclear.

The fictional Frankenstein is the mad scientist archetype with Nash, Hawking, Turing and, yes, Ulam following in his footsteps. For these geniuses, in varying degrees, solving mathematical and scientific problems was not a moral consideration and ultimately took precedence over contexts, consequences and even personal relationships. Perhaps, no one was more passionately married to his secretive work than Turing, who dubbed his code-breaker “Christopher,” in honor of his childhood companion with whom he shared a deep homoerotic bond both in the film and in real-life. Turing played a crucial role in cracking intercepted coded messages enabling the Allies to defeat Germany.

Each of these figures was challenged in some profound way. Nash, who won the 1994 Nobel Prize in Economics, for his development of the mathematical foundations of game theory, was a paranoid schizophrenic who suffered from delusions. Hawking, viewed as one of the greatest theoretical physicists of the 20th century, and afflicted with ALS, which rendered him fully paralyzed, was an amalgam of atheism, progressive politics and infidelity. Complexity and contradiction was their hallmark, and all of the actors brought their characters’ multilayered psyches to life.

Playing Ulam, Tlokinski had less to work with. Whatever cross-currents may have existed in Ulam’s soul have not been fully realized here. Still, within the parameters of the script, his performance is admirable. And visually the film is stunning. Cinematographer Tudor Vladimir Panduru and production designer Florian Kaposi evoke the era, especially the bleak, barren tumbleweed-strewn desert where the bombs were first set off. In a haunting, final scene, Ulam is staring out at the lifeless landscape and notes to himself, “All I created in life is burnt sand.”

This film has its moments. If only there were more of them.