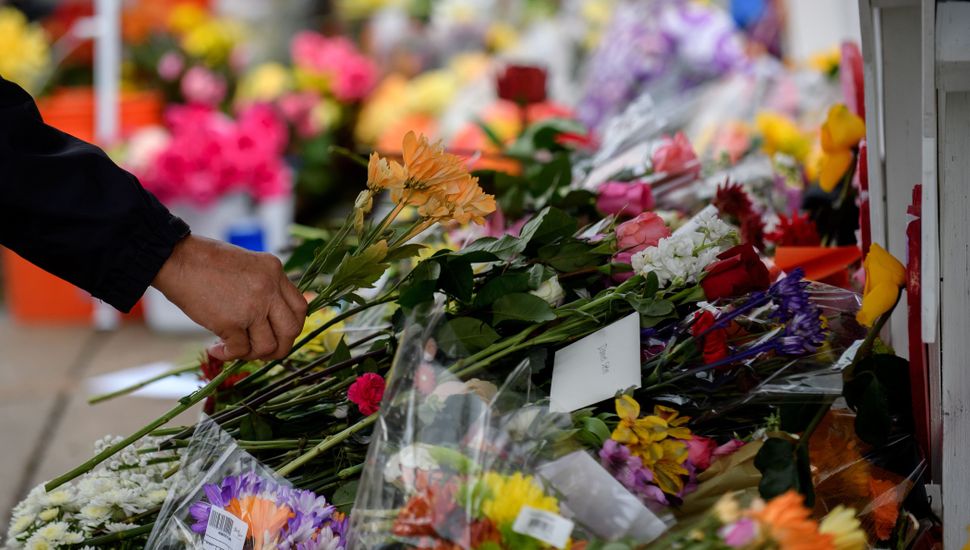 Flowers at the memorial for the victims of the Tree of Life shooting in Squirrel Hill. By Getty Images

Squirrel Hill: The Tree of Life Synagogue Shooting and the Soul of a Neighborhood

After each mass shooting, once the political posturing subsides and the press spotlight moves on, the affected families and communities tend to fade from public consciousness. But what happens to them next? “When the cameras and the police tape were gone,” Mark Oppenheimer asks in “Squirrel Hill,” “what stayed behind?”

The book’s publication marks the third anniversary of the Tree of Life synagogue shooting in Pittsburgh Oct. 27, 2018, which left 11 people dead – the deadliest antisemitic incident in American history. The avowed white nationalist Robert Bowers has been charged in the shootings and is awaiting trial.

Oppenheimer, director of the Yale Journalism Initiative and host of Tablet magazine’s podcast “Unorthodox,” visited Pittsburgh an impressive 32 times and interviewed about 250 people to report the story. His immersive account – which also sheds light on the attack’s antecedents, historical context, and especially its geographic setting — is granular in its detail, emotionally intimate and often moving.

Squirrel Hill, Oppenheimer tells us admiringly, is home to one of the country’s most diverse and stable urban Jewish communities, “densely inhabited and very alive.” Located in the city’s East End, it is walkable, adjacent to Pittsburgh’s major universities, and a short commute from downtown. According to Oppenheimer, its Jewish population – ranging from Orthodox to secular and comprising about one-third of its residents – coexists harmoniously and gives the area much of its character.

A former religion columnist for The New York Times, Oppenheimer has roots in Squirrel Hill: Two of his great-great-great grandfathers helped settle the neighborhood in the mid-19th century, his father was raised there, and a few of his relatives remain. (I, too, have a glancing connection to Squirrel Hill – warm memories of frequenting its movie theater and delicatessens when I lived in Pittsburgh for three years about three decades ago.)

Oppenheimer’s narrative is a mosaic of stories told from the perspective of various characters: survivors of the shooting, rabbis and congregants, neighborhood activists and artists, and well-meaning, if sometimes clumsy, outsiders. The book’s organization is mostly chronological. But a little more than halfway through, Oppenheimer interpolates a thumbnail history of Squirrel Hill, which invested in Jewish institutions and retained its Jewish residents despite the allure of the suburbs.

The opening chapters of “Squirrel Hill” are particularly intense and affecting. After a prologue, Oppenheimer takes us inside the synagogue on that terrifying day when the three small congregations sharing the Tree of Life building were holding sparsely attended Shabbat services. He even leads us into the supply closet where three members of the New Light congregation hid. One, who was deaf and thought the shooting had stopped, stepped out – and was killed. The other two survived.

One of Oppenheimer’s key sources is Dan Leger, one of two Jewish congregants injured in the attack (along with six police officers). Leger — a 70-year-old hospice nurse who was a convert to Judaism and a member of the politically engaged Dor Hadash congregation – lost one of his closest friends, the family doctor Jerry Rabinowitz, that day. Critically injured, Leger fought his way back to health.

Oppenheimer documents a range of reactions to the tragedy – from small gestures, like the distribution of warm challah and the creation of a memorable graphic design, to significant fundraising campaigns. He describes the zeal of Greg Zanis, who drove thousands of miles distributing homemade crosses at the scene of major tragedies. (For the Tree of Life massacre, Zanis affixed Stars of David to the crosses.) Oppenheimer also introduces us to Eric Lidji, a local archivist charged with collecting commemorative artifacts, such as those crosses.

Many of Oppenheimer’s characters are rabbis. The Orthodox rabbi Daniel Wasserman dispatches his Pittsburgh congregants to serve as “guards of the dead,” ensuring that, before burial, corpses are never left alone. Tree of Light Rabbi Jeffrey Myers pleads, on Rosh Hashanah, for his congregants to sustain their synagogue activity beyond the High Holidays. Oppenheimer also describes possible rabbinical missteps: seemingly incessant media appearances by the Tree of Life’s divisive former rabbi, Chuck Diamond, and New Light Rabbi Jonathan Perlman’s mention of gun control – too political for some — at an anniversary commemoration.

Oppenheimer acknowledges the Pulitzer Prize-winning reporting of the Pittsburgh Post-Gazette — in particular, the decision by its then-executive editor, David Shribman, to use the Hebrew lettering of the Kaddish, or mourner’s prayer, as a banner headline over a funeral image. But he decries some national coverage of the massacre for recycling inaccurate information, including the notion that only the Tree of Life congregation was hit in the massacre. (That mistake led to philanthropic funds being overwhelmingly directed to that single congregation.)

In the responses of both Squirrel Hill residents and outsiders, Oppenheimer sees mostly caring and generosity – with notable exceptions. He is skeptical of the impact of a “medical clown” from Israel and scathing about the attempt of Orthodox Jews from New York to usurp ritual body washing ceremonies. In general, he suggests that “trauma tourists” did more to burden than to support the Jews of Squirrel Hill, who were best suited to care for their own.

Oppenheimer’s dense reporting concentrates on the year following the massacre. But any ending is, of course, merely a literary contrivance. The Bowers trial, when it finally happens, will no doubt reopen the community’s wounds. The architect Daniel Libeskind’s planned reconstruction of the Tree of Life building, including new commemorative spaces, may, in turn, promote healing. Or more controversy. For the foreseeable future, Squirrel Hill’s story – of grief, trauma and resilience – will continue.